11 Years 'Til Doomsday: A Call to Action on Combating Climate Change

What will you be doing in 11 years? Maybe you will be raising a family, celebrating your birthday or working. Or will you be inevitably exposed to extreme heat, flooding, drought and heightened poverty unless an immediate change in reducing greenhouse gases happens now. My name is Ella Whitley and today I am here to talk to you about climate change and what we need to do now to save the world. We have 11 years to stall a 2°C rise in temperature before the most severe effects of climate change will forever alter the world.

Don’t waste time
Get a verified writer to help you with 11 Years ‘Til Doomsday: A Call to Action on Combating Climate Change
Hire writer
$35.80 for a 2-page paper

Today, I am here to show you how humans have caused global warming around the world before I call on you to take action and fight for our survival.

Global warming is currently the biggest threat to the survival of the human race. The climate crisis is crippling the world's food and water supplies, environmental sustainability and the preservation of our world's ecosystems. A report by the United Nations states that global emissions of carbon dioxide need to decline by 45% from 2010 levels by 2030, reaching net zero emissions by 2050.

Global temperatures have steadily increased since the Industrial Revolution, 200 years ago, causing the increase of carbon dioxide in our atmosphere. Today, carbon dioxide levels are higher than at any point in the last 800,00 years. Atmospheric carbon dioxide was never higher than 300 parts per million until 2017 when it reached 405 parts per million. Over the last 60 years, the increase in the amount of atmospheric carbon dioxide is 100 times faster than pervious natural increases. These increasing levels of carbon dioxide are the result of humans burning fossil fuels. Our world is dying around us. More than 1 million species have become extinct due to the effects of climate change. Approximately 154,000 people die every year from the effects of global warming and according to the World Health Organisation, these numbers could almost double by next year. Imagine the amount of people in 11 years. Despite all these alarming facts, there are critics and politicians who debate these scientific facts and believe climate change is not the result of human activities. Pauline Hanson, One Nation leader, states "if climate change is happening, it is not because man is causing it to happen." Yet there is clear scientific evidence showing that the increase of CO2 in the atmosphere is a direct result of human activities since the Industrial Revolution.

Despite the devastating scientific evidence supporting global warming, there are those that believe humans are not the cause of climate change. This is a disappointing reality, as the future of our lives and our planet are at stake and the last thing we should be doing is arguing whether or not our world is being destroyed. Australian politicians have done little to curb carbon emissions and instead of taking action, disagree and argue on effective responses to the climate crisis. Earlier this year, Pauline Hanson, denied that there is any "scientific fact to support the claim humans are playing a role in climate change.” Conversely, 97% of climate scientists believe that humans are the cause of climate change. Human emissions are disrupting the natural balance of carbon dioxide resulting in the extraordinary levels of carbon dioxide in 800,000 years. Only about 40% of human CO2 emissions are currently being absorbed, while the rest remains in the atmosphere. A natural increase of 100ppm in CO2 levels normally occurs over 5,000 to 20,000 years. This change has just happened in 120 years. Pauline Hanson also claimed that volcanic eruptions caused more carbon emissions than man-made pollution. However, the U.S. Geological Survey revealed that the world's volcanoes generate about 200 million tons of CO2 a year, while human industrial and automotive activities cause 24 billion tons of CO2 emissions annually. Greenhouse gas emissions from volcanoes only include less than 1% of those generated by anthropogenic activities in today's industrial world. This shows that we, the human race, are the problem. It is not Earth's geophysical processes that are creating climate change, it is an increase of human-produced global warming in the last 200 years.

Now, I'm urging everyone here to take action. We, as a generation, may not have caused this devastation, but we must be the ones to fix it before it's too late. Do you want your children and family growing up in a world filled with intensified droughts and flooded coastlines? We have to act now. I also call upon our leaders to step up and take responsibility to help transform our communities, protect our oceans and environment and work towards a sustainable, carbon-free world. We need to push towards renewable energy sources and divest from fossil fuels. Delivering this future requires everyone to work together, from our national leaders, to our communities and to us transform our world before it is too late. We only have 11 years, so it is now or never.

We have seen the effects of human activities on the health and livelihoods of the human race. It is an undeniable truth that climate change has become a major challenge and even more worrisome with the fact that some governments are yet to acknowledge the pressing threat of global warming on the survival of the human race. Human-produced global warming has created an expanse of CO2 in the atmosphere within the last 200 years since the Industrial Revolution, even if some right-wing politicians wish to debate it. The whole world has to do more to stop climate change, but it can start with us.

11 Years 'Til Doomsday: A Call to Action on Combating Climate Change. (2021, Oct 31). Retrieved from http://envrexperts.com/free-essays/essay-about-11-years-til-doomsday-call-action-combating-climate-change 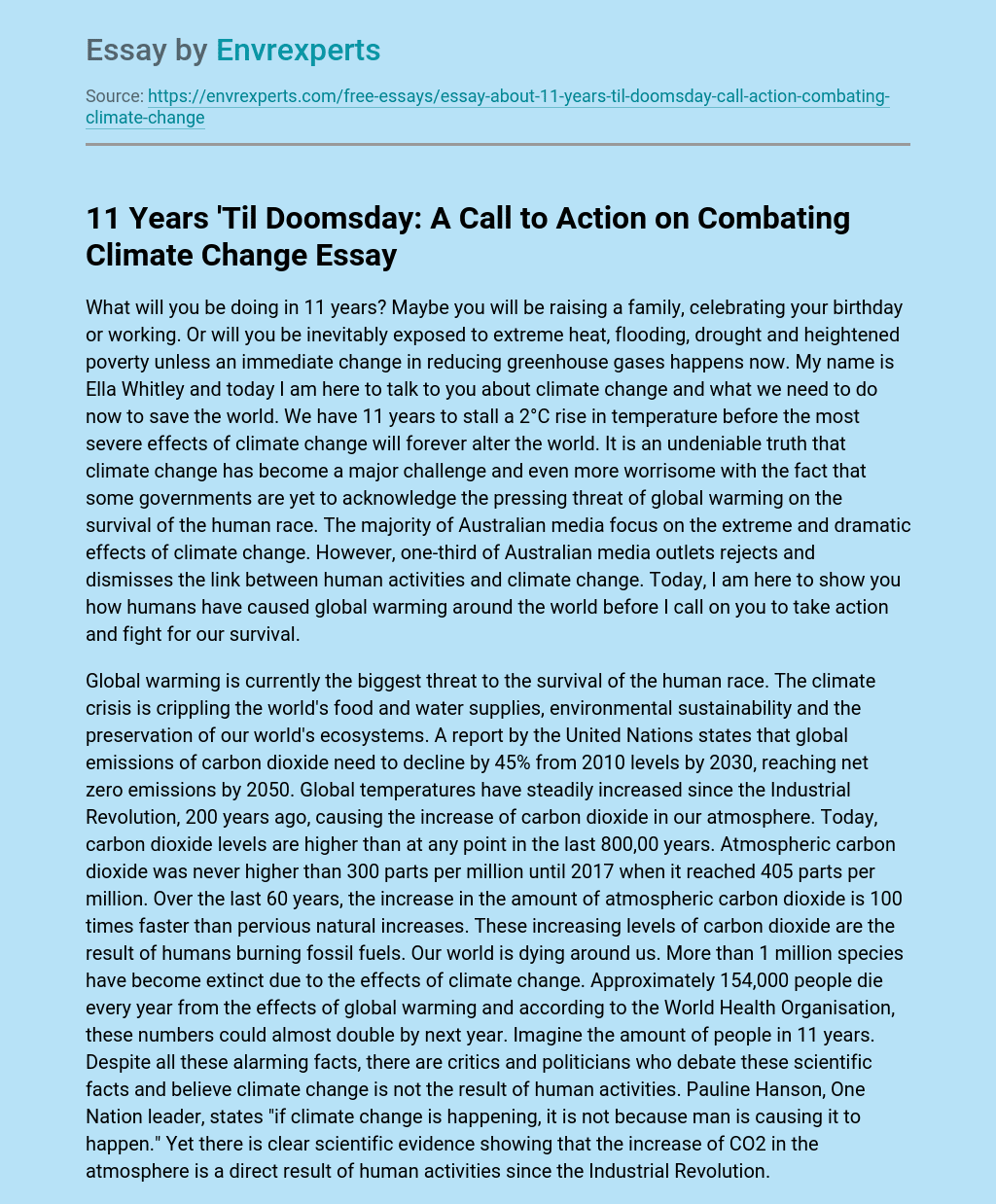