Acid Rain in Our World

Acid rain has been represented in many fictional movies and cartoons as literal acid descending from the sky and burning everything below it. Although it may not burn everything on contact, the damage it causes does affect many living animals and plants. Acid rain indirectly causes harm to our human species, since we eat these animals and plants. It is not only a problem in America, but all over the globe, making it a situation for everyone to be concerned about.

Don’t waste time
Get a verified writer to help you with Acid Rain in Our World
Hire writer
$35.80 for a 2-page paper

Acid rain is defined as: rain containing acids that form in the atmosphere when industrial gas emissions combine with water. The problem of acid rain is not new. It has been around for several centuries. The majority of acid rain pollution ran be related back to the many factories that were built during the Industrial Revolution. Today, the emissions produced by these factories are the main contributor to the increasing acid rain problem. It was not until the mid 1800s however, that acid rain began to be studied and questioned (http://ks.

essortment.com/acidraineffect_rqmz.htm 1). Acid rain has become more of a concern since the mid 1900s, when fishermen began to notice the reduction of the fish population in their local streams and rivers. Dead fish also began appearing on the banks of rivers. As time went on, the dying fish population became more evident as many lakes were completely wiped out of fish. These tragedies led scientists to search for a reason and a solution to the problem of dying fish.

As scientists began to explore various lakes they found dead fish by the thousands on the shores, and even more at the bottom of the lakes and rivers. Scientists took fish that were alive and dead to laboratories to perform tests to see what could have been going on to produce all of the dead fish. After running several tests, the fish typically had low sodium levels in their blood; a symptom of acid poisoning (http://ks.essortment.com/acidraineffect_rqmz.htme 2). The acid had been in the gills of the fish and rendered them unable to extract salt from the water to maintain their sodium levels.

In 1852, Angus Smith analyzed the chemical components of rainfall in factory zones, and identified the relationship between atmospheric pollution and acid rain. It was around this time that the term "acid rain" began to be used (http://ks.essortment.com/acidraineffect_rqmz.htm 1).

So where does all the acid rain come from? Some industries and emissions from vehicles contribute to the majority of the problem. These two factors release sulfur dioxide and nitrogen oxide into the air. These emissions then change into sulfates and nitrates under the influence of sunlight and moisture, and then get converted into sulfuric acid and nitric acid respectively, which then come down as acid rain (http://www.ec.gc.ca/acidrain/acidfact.html 2). When these substances are released into the air, winds can carry them long distances. Damage occurs when the environment cannot neutralize the acid being deposited.

Water is one of the most vulnerable places for acid damage to occur since two-thirds of the earth is covered by water. Knowing the Ph scale and understanding it is a major factor in knowing the strength of the acid content in water. A Ph scale measures the amount of acid in liquid. Acids release hydrogen ions, therefore, the acid content of a solution is based on the concentration of hydrogen ions. These ions are expressed as "Ph". The scale varies from zero to fourteen, with zero being maximum acidity and fourteen being maximum alkalinity. Rain that measures between zero and five is termed "acid rain" because of its high acid content. The Ph scale is slightly deceiving though, with a small number increase indicating a tenfold increase in acidity (http://ks.essortment.com/acidraineffect_rqmz.htm 1).

The main chemical in acid rain is sulfur dioxide. (SO2). SO2 is a bi- product of industrial processes and the burning of fossil fuels. Once released into the air, SO2 reacts with moisture and oxygen in the air to form sulphur trioxide, a precursor of acid rain (http://www.ec.gc.ca/acidrain/acidfact.html 3).

The second culprit in producing acid rain is NOx emissions. These are emitted from the combustion of fuels in motor vehicles and furnaces.

A good example of the devastation acid rain can cause on an ecosystem, is the mountain water of Bohemia. In this secluded part of the Czech Republic, acid rain damaged more than two thirds of the forested headwaters by 1989. Water quality diminished, and streams hadn't seen trout in forty years due to sulfur emissions from East German and Polish coal-fired power plants (Mountain waters of Bohemia 2). Due to the work of hydrologists Dr. Josef Kreck and Zuzana Horicka, the land is beginning to return to its healthy, productive state. Through Earthwatch teams, and much deliberation with the power plants, procedures and techniques that lead to so much deposition has been lessened or stopped completely. Ten years after the original reading were taken, sulfur deposition had dropped an astounding twenty to fifty percent ( Mountain waters of Bohemia 3).

Ever since the Industrial Revolution, there has been an increasing amount of sulphur in the soil around the world. The excess sulfur causes extreme strain on trees. Many trees' immune systems have been damaged by so much pollution. Donald DeHayes sums up the trees decline in a very serious way, stating that, "If extensive, the decline of individual species would radiate through plant communities. It would alter the competition and survival of populations, perhaps even species, including animals at higher level of the forest food chain (Hope 2). So basically, trees dying off can lead to a nasty chain reaction that could eventually reach humans.

There is no doubt that acid rain is a major problem in the world today. It indirectly leads to the death of humans by killing off our water supply, wild life, and the plant life that we need for oxygen. The only way to stop the mass quantities of emissions being released into the air is to stop the companies that are producing it. The only way this will get done is if the government steps in and sets tighter regulations on these companies. In certain parts of Germany, trees are dying from magnesium deficiency because acid rain has leached magnesium from the soil (Cutlip 1). The hydrogen ions in acid rain replace the nutrient elements in the soil. So an equal amount of nutrients are taken from the soil, as the amount that arrived from acid rain (Cutlip 2).

Man depends on animals and plant life for food. Acid rain has been wiping out entire stocks of fish in certain lakes. The people that depend on these fish for survival suffer greatly. The fish that have survived are often too contaminated to eat, and could cause serious health problems if eaten. In urban areas, much of the drinking water has been purified of any chemicals associated with acid rain. however, many rural areas do not have the benefit of having complex chemical treatment plants available. Also, aluminum is highly evident in acid rain, and has been linked to Alzheimer's disease. To this day, much of the water treatment in rural areas fails to detect and eliminate aluminum, leaving millions to inject highly dangerous aluminum compounds. (http://ks.essortment.com/acidraineffect_rqmz.htm 2).

So what can be done to solve the issue of acid rain? There is no doubt that humans, animals, and plants are highly affected by acid rain. There are things being done though, to lessen the amount of acidity in the air. Many environmental groups such as the Environmental Protection Agency (EPA) and World Wildlife Fund have been increasing the pressure on governments around the world to make more strict guidelines for its countries (Hope 2). The Clean Power Act bill is under consideration by the United States government (Hope 2). The bill involves a power plant cleanup package that would reduce acid rain causing emissions and other environmental hazards nationwide.

Over the past few years, treatments for highly acidic lakes have become readily available. A process called liming is being done to lakes. This involves putting a substance called quicklime in the lakes. However, this procedure can only be done in low-acidic lakes, with small volume (http://ks.essortment.com/acidraineffect_rqmz.htm 2).

Some industries have added scrubbers to their smokestacks to reduce the amount sulfur dioxide dumped in the atmosphere. The automobile industry has developed specially designed catalytic converters to make the gases coming out of automobiles harmless.

We as humans can do much to help our world. Reduction in automobile usage, and the reduction of electric power whenever possible can help dramatically. If we as humans do our part, we can only hope that our governments will do the same by passing laws and regulating our industries. Acid rain can be reduced, or even stopped altogether, if we try hard enough, as individuals and as our entire population.

Acid Rain in Our World. (2021, Oct 31). Retrieved from http://envrexperts.com/free-essays/essay-about-acid-rain-in-our-world 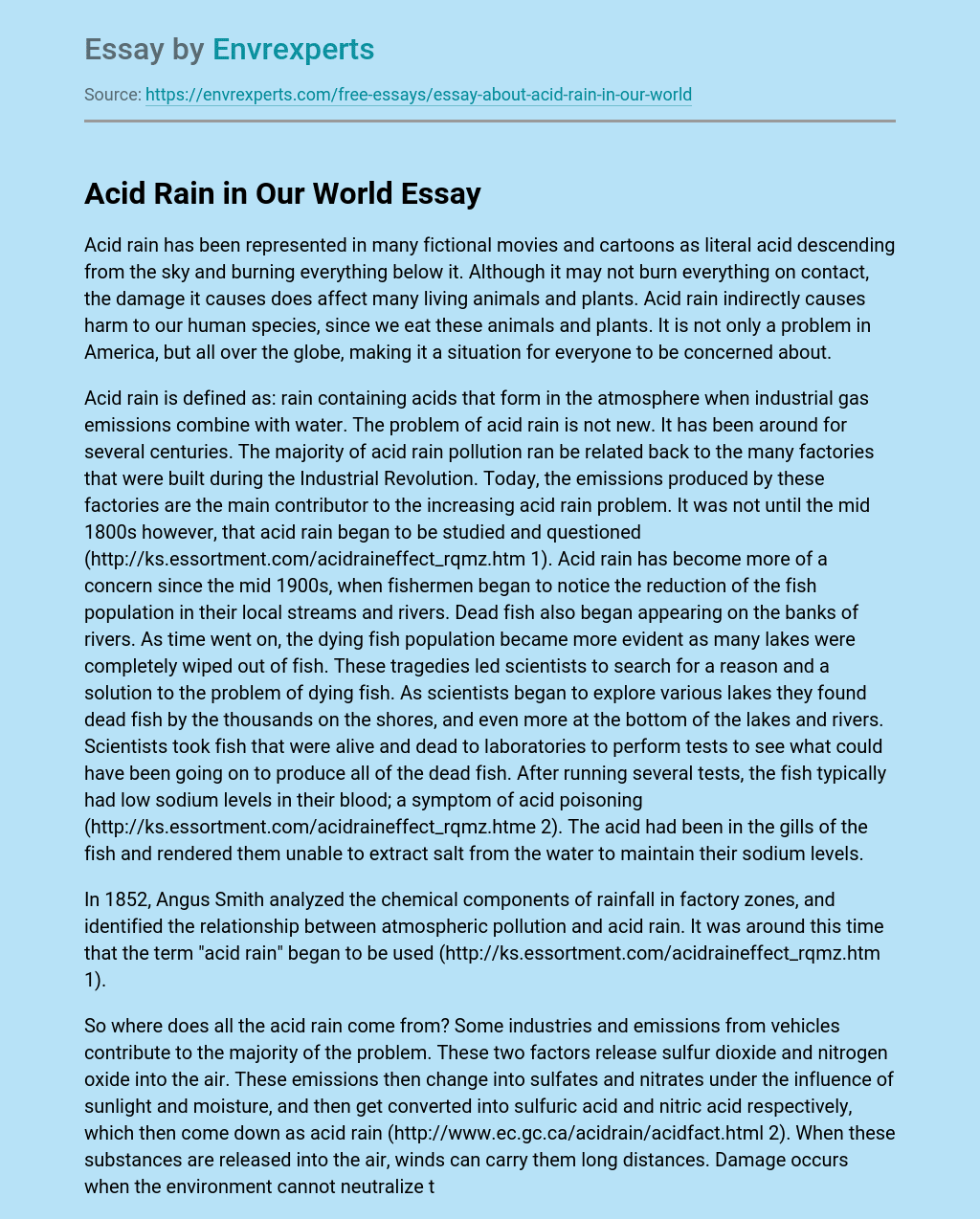