Addressing the Problem of Air Polution

As most of us know, air pollution is a significant problem we face today, but what we are not realizing is how negatively it's impacting the environment and people. In today's society, we are too focused on building towers, buildings, factories, companies, industries, and increasing shiny lights in the city, that the thought of air getting polluted each second, is not even crossing our mind. There are many ways air pollution can be caused, but also many ways it can be decreased, and that is what we should work on because worldwide, people are suffering and dying due to the toxic polluted air.

Don’t waste time
Get a verified writer to help you with Addressing the Problem of Air Polution
Hire writer
$35.80 for a 2-page paper

What causes air pollution? Unfortunately, there is not only one single cause — there are many causes for air pollution. Everything that gives off fumes or smoke leads to polluted air. Things such as emissions from manufacturing activities, burning fossil fuels, and household and farm chemicals are all at fault. Waste manufacture corporations and power plants release immense levels of organic compounds, carbon monoxide, and chemicals into the air.

This occurs nearly everywhere in the world where people live. Not only is our environment in danger but we are too.

Air pollution causes many sicknesses, such as asthma, cardiovascular, lung disease and more. Polluted air occurs very easily, and hurts our health without even us realizing. PM is one example of extremely hazardous air. "PM is a mixture of particles that can adversely affect human health and includes dust, dirt, soot, smoke, and liquid droplets directly emitted into the air by sources such as factories, power plants, cars, construction activity, fires, and natural windblown dust" (Uzoigwe, 446).

Another type of harmful air pollution is called -Ground-level 03-. Ground-level 03, can cause many damages to the human body as well. It can cause multiple side effects, if breathed and inhaled. "Ground-level 03, a major component of urban smog, is one of six air pollutants that the United States EPA have determined as likely to cause human health problems. Breathing ground-level 03 can result in a number of harmful health effects" (Uzoigwe,447).

I use to question myself many times about how air pollution can be decreased and what'll happen if we stopped the extra things we build and make each day. -Well, we need companies, industries, and construction work done. If we lay off those important things to stop polluting the air, then what will our environment turn into? Will it be as nice and enjoyable? Will we have all the necessity we want and need? Or will it turn into a dead-boring, lifeless, and undeveloped environment? But, as I researched more about the causes of air pollution, and the many ways we can at least decrease it, most of my questions and doubts vanished for good. I realized we can't ever stop air pollution, due to the numerous ways it can be caused, but we can always try to lower the level and try to live healthier.

Cities nowadays are overloaded with cars, trains, buses, etc. But why not live a lifestyle that requires a little bit of exercise and health improvement? Instead of driving to a store 10 minutes far, or pick your child or sibling up from school, why not ride a bicycle and help reduce the bad air, this automobile causes? It'll not only save you gas, save you from breathing in polluted air, or saving the environment, but it will also improve your health progress! So the next time you want to go to a local area, walk it off, or ride the bicycle that'll save you and the rest of the city from polluted air. And believe me, change starts from one! Keep your trend going, and pass it on. You can be the change for the environment, and other people's life.

Air pollution is a huge deal, and the sooner we find a solution the better. It has already effected many countries and people severely. The surrounding countries in Middle east, such as Iraq, Iran, Afghanistan, Pakistan, also China, Philippines, many states in the USA, such as New York, and Cali. These places mainly, due to overloaded cars, traffic, overpopulation and many more. "About 40 percent of deaths worldwide are caused by water, air and soil pollution" (Carty, 1). 40 percent seems extremely dangerous, and each year the rate of deaths caused of air pollution increases. So, what are some suggestions we should consider?

There are many ways we can reduce air pollution. For example: conserving energy! Turn of the light when you leave somewhere around the house, or turn off the extra lights you don't really need. Recycling paper, plastic, cardboard, glass bottles, and aluminum cans, saves energy and reduces production emissions. Keeping woodstoves and fireplaces in your homes well maintained and managed. Or even replacing old cook stoves with EPA certified models. Save trees, don't burn or cut them down. Trees play a big role in our lives, and provide healthy air. Do the laundry with cold or warm water every now and then instead of using hot. Those are some simple ways we can help the environment and reduce air pollution.

Buying smart is a very important goal we should all try to aim for. When at the store, buy batteries that are rechargeable. Or when it comes to vehicles, some people love to add that big turbo and speed boost on their car, but what they don't realize is how harmful that smoke is to the air. Let the choice of your car be something efficient in low polluting models. Buy products that are more reusable when packaging. Use public transportation sometimes rather driving your own car. If the drive thru line is long, park your car, and go in. If caring about the environment is important to you, than at least a few of the suggestions should be considered to act for.

A new study finds that exposure to traffic and air pollution contributes to 12 percent of heart attacks worldwide—the most of any factor. While poor air quality may rise a particular individual's risk only moderately, the effects add up when spread across a city ("Traffic and air pollution most significant triggers of heart attacks worldwide" (Andrea Baccarelli 1). So even if we are not all effected majorly by air pollution, we all are in some way; at least most of us, and that spreads on through the city and rates of diseases increase. Air pollution is a serious harm, and today it's as if the average person forgot or does not care about how risky this issue is.

A lot of the air pollution today, is created by humans. In other words, we are poisning ourselves. We're building so much that we are not seeing the danger and risks of what we're doing. Factories and industries are built on the dailies worldwide. We're too focused on building, but not cautious enough to reduce harmful air and build morecarefully. Building clean, meaning using better filters and other smoke prevent ages when building can help the environment immensely. It saves many people, including ourselves from strokes, heart attacks and other diseases. Others may argue, it's expensive to remake industries or car models, etc. but what they need to ask themselves is, is money the problem or our life being at risk?

As mentioned, EPA has done many things since they were first made. “During the years since EPA's creation (Dec. 2, 1970), the U.S. has achieved tremendous progress in protecting public health and the environment. During this time, the EPA has endeavored to achieve systematic control and abatement of pollution, by administering a variety of research, monitoring, standard-setting, and enforcement activities. EPA has also supported and coordinated research and antipollution activities by state and local governments, private and public groups, individuals, and educational institutions (“What Has the U.S. EPA (Environmental Protection Agency) Accomplished in Its History?”).

This claims, that the EPA is doing its part. But the conflict here, is not so much about what the EPA has done or is doing, it's how things are being built and how many of it is being built. If we started building cars that ran on batteries or electricity we would be reducing at least a rate of air pollution, or if the chimmneys in factories and industries were better filterized, it would also be a small solution to air pollution.

People are waking up to the fact that the EPA cannot protect us, or the environment. David Schoenbrod, is a scholar and reports on "Families against Cancer &Toxics”, that the EPA is not protecting us like they promised to, and they're not doing a good job. It's our duty to clean the air and live for ourselves rather depending on the government. "Schoenbrod claimed the EPA was a convenient way for Congress to claim credit for improving public health and environmental welfare while shirking the duty of actually accomplishing those goals. Its multiple roles as national environmental researcher, rule-maker and rule enforcer make it both too slow to react to local crises and too big for anything but a major corporation to deal with effectively" (Chaney, 1).

Meanwhile, EPA deserves some credit for the work they do. But what EPA is not doing, is reducing the rate of air pollution as they said they would. Everyday, rather decreasing the level of toxic air, it's only increasing and worsening the condition of the enviroment and peoples health. Acordding to the article "What's Wrong With The EPA", written by William Sanjour who works with US Environmental Protection Agency, the EPA does not turn their words into action. Nonetheless, they do show they care and attend meetings, and even propose solution ideas, collect data, etc, but at the end of the day, what is accomplished? Nothing. "The people who get ahead are those clever ones with a talent for procrastination, obfuscation, and coming up with superficially plausible reasons for accomplishing nothing" (Sanjour, 1).

Air pollution can be argued in many ways. But the major concern we should focus on, is not what particularly harms the environment, but rather how we can help save it. It is scholarly argued that, EPA is not doing a well enough job protecting the enviroment, but despite these articles, there is also articles that disagree with that and claim the EPA is doing the best it can. Whether EPA is working hard enough or not, the question is we the people, are we concerned and worried about the environment and health issues caused be air pollution? If we are, then a solution proposal, as the ones mention above can easily turn into action.

In conclusion, even if we are not involved in the environment protection agency legaly, we can all help out on our own. Do your part, and let everyone else do theres. Lives are in danger, environment is at risk, and the smallest step toward a healthier life also environmental living, is to start off with small steps. Cleaning the community, saving energy, and recycling are three great ways to start off. You may disagree with the EPA, but in reality, you are also one. So do your part and save the world.

Addressing the Problem of Air Polution. (2021, Oct 31). Retrieved from http://envrexperts.com/free-essays/essay-about-addressing-problem-air-polution 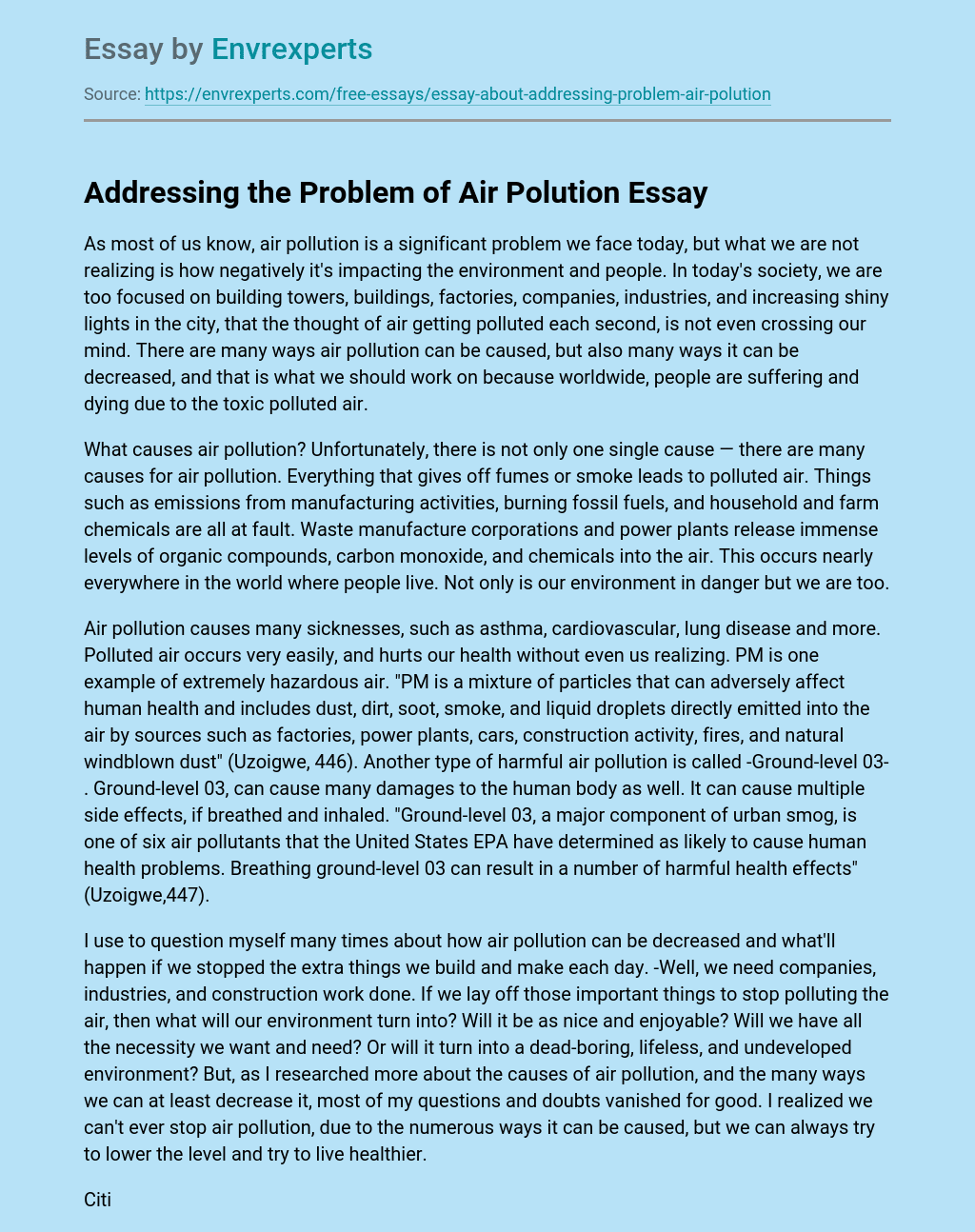