Advantages and Disadvantages of Solar Energy

Research question: What is the Advantages and Disadvantages of solar energy? in Qatar?

Aim: The aim of this paper is to discuss the advantages and disadvantages of solar energy

Energy is currently an international concern. There is the need to embrace renewable sources of energy as the ones that are not renewable are getting depleted on a daily basis. Non renewable energy sources are also a threat to the sustainability of the environment especially owing to the emissions into the atmosphere.

Don’t waste time
Get a verified writer to help you with Advantages and Disadvantages of Solar Energy
Hire writer
$35.80 for a 2-page paper

Solar energy is cost effective, and consumers are in a position to save money. (Abbas, Oadir, Khalilpour, & Chiesa, 2012)(Bainbridge, D.& Haggard, K.

july,2012). To have solar power, consumers require installing solar panels that will provide a source of power at a low price. Solar panels are cheap and readily available. Solar energy is available in most parts of the worldwide where there is the sunshine in most parts of the year, unlike petroleum and other sources of energy that are found in few areas of the world. Solar energy is also cheap as it requires fewer maintenance costs after installation and optimization. The consumers of solar energy save a lot of money that would be used to acquire other sources.

Solar energy is easy to use as what is required is just to mount a solar panel on an open space. (Perez-Astudillo & Bachour, 2015, p.169). Solar energy is renewable. With the increasing demand for power worldwide, there has been needed to tap natural sources of energy that are known to be cheap and reliable as they are renewable and hence the growth in solar power production. Solar energy is renewable as sunlight is available in most parts of the year in Qatar that has clear skies for the most part of the year. This is also evident in other parts of the world. Sunlight is tapped and converted into solar energy. It is available only during the day when there is sunlight. This makes it efficient and cheap as it does not require complex machinery as the consumer only requires a solar panel to tap the light and convert it to energy for domestic and industrial use. Solar energy is advantageous as it can be. This promotes the efficiency of solar power. With the advancement in technology, there has been the development of solar-powered vehicles. These vehicles are efficient as they do not consume fuel hence cheap to maintain and they conserve the environment as they do not emit gasses.

Qatar, however, is an oil exporting country in the Middle East. This is the main source of income. (Sanfilippo, Martin-Pomares, Mohandas, Perez-Astudillo, & back our, 2016, p.77). (Mahmoud, A., Srikanth, P., Rajendra. S., Imtiaz, H., & Zoran, F.sep-2016). Embracing solar energy could lead to loss of income from oil products. Many Middle East countries are heavily reliant on income from oil products. According to Atalay, Gulf Cooperation Council States is the richest region in the world. Qatar, Kuwait, and other OPEC countries are some of the world's largest oil producers in the world, and they greatly are accountable to the balance of the world economy and financial stability. A collapse in the economies of oil producing countries that generate trillions of dollars from the industry would lead an economic crisis in the Middle East and consequently worldwide as the oil industry plays a significant role in the world's economy and financial stability. Many industries globally are affected by the availability and the prices of the oil products on the world's oil market. Embracing of solar energy would lead to falling in prices and production of oil, and this would have severe impacts felt worldwide. Solar energy would generate very little income compared to the income generated from oil. Qatar has seen the fastest economic growth in the world due to the proliferations of petroleum products in the last four decades. This has made Qatar one of the richest countries in the world (Perez-Astudillo & Bachour, 2015).. Income that has been generated from solar power accounts for trace percentages of the world's economy. This would mean that the global economy would lose trillions of dollars.

Advantages and Disadvantages of Solar Energy. (2021, Oct 31). Retrieved from http://envrexperts.com/free-essays/essay-about-advantages-and-disadvantages-solar-energy 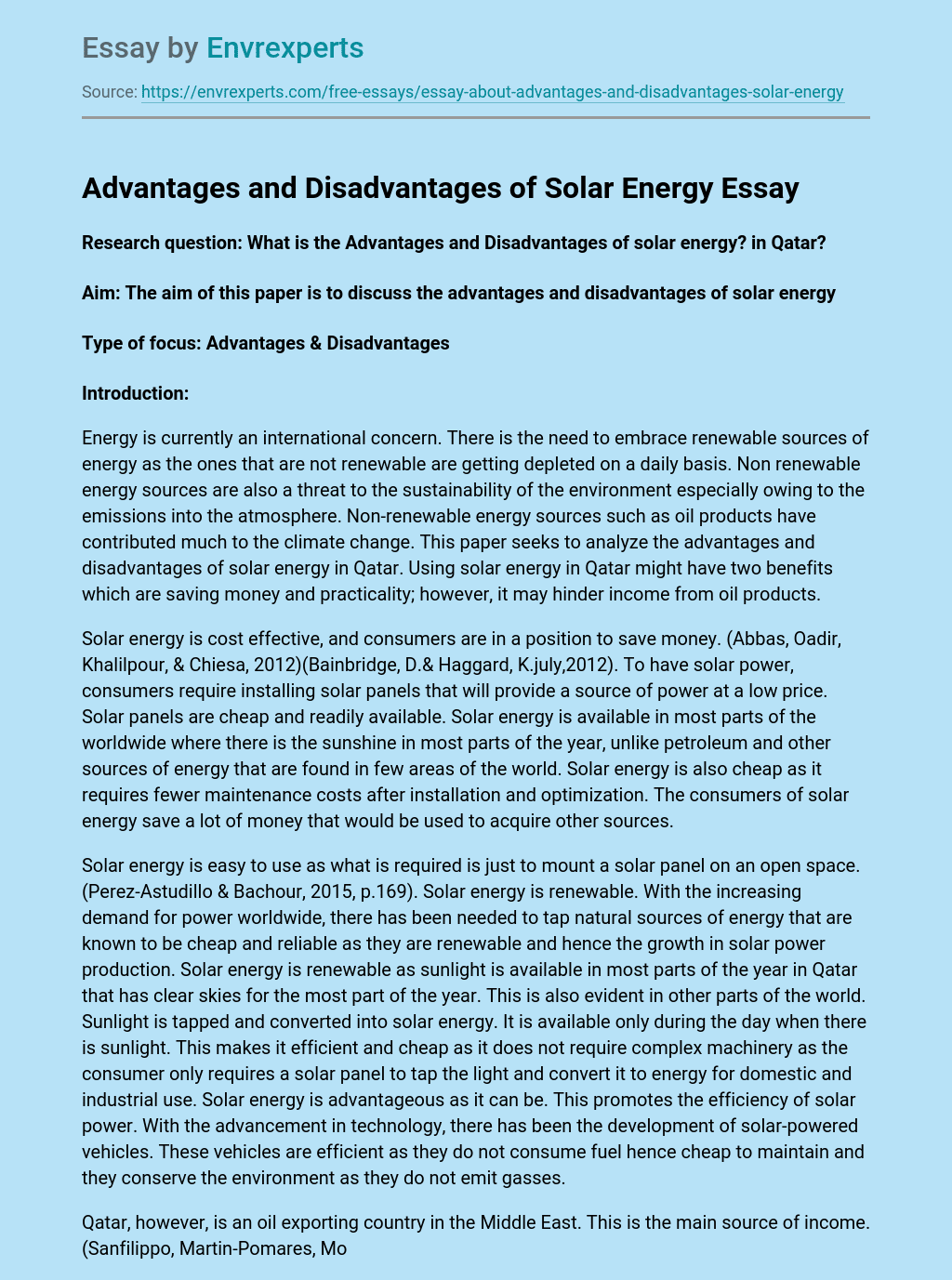