Integrated pest management is integrated use of all possible effective tactics which are environmentally safe, economically viable, technically feasible, and socially accountable to maintain pest population below economic injury level (EIL). It is an ecosystem based preventive method that focuses on pests and their destruction through various techniques like biological control, habitat, modification in cultural practices and use of resistant. Pesticides, insecticides by the and other various chemicals are used when the pests are in huge number or when the damage caused by them almost destruct the whole crop, which are not healthy for land, water, animals and for humans as well because they come in contact with above mentioned either directly or indirectly.

Don’t waste time
Get a verified writer to help you with Agriculture and Pests Problems
Hire writer
$35.80 for a 2-page paper

Why Integrated Pest Management is necessary?

• To agriculture producers- it provides low cost pest management to the farmers and the crops grown by them are full of nutrition with presence of zero or less pesticides (pesticides only used when the pest population in not in the control of the farmer);

• To the environment- the IPM increases the biological based pest management procedures and because of that no chemicals, insecticides and pesticides are used which don’t contaminate the water level, doesn’t make the land barren and bio-magnification don’t occur so humans and animals and various aspects or components of environment are safe;

• For pest management professionals and organisations- it provides opportunities to the field related individuals to come with innovative and economically feasible ideas that can help farmers;

• To general people- nowadays, as the global population is rising on a steady graph therefore, it becomes necessary that the food (vegetables, fruits) and the crops (cereals, wheat, maize, chick-pea etc.

) which are supplied to people should be insecticide, pesticide and chemical free for their better health. What is a Pest? Pests are the organisms that destruct or interfere with the plants in the fields and create their impact on animal as well as on human health. They can be weed, vertebrae, in-vertebrae, nematodes or pathogens like bacteria, virus or fungus which causes damage, disease or nuisance in cops, water quality, animal life or in the different parts of the environment. All animals are pests but all pests are not animals. There are various types of pests that can harm the crop, however a specie can be a pest to one but it can be beneficial in another for example Patterson’s curse is often valued as food for honeybees and as a wildflower, though it is a poison livestock.

The agricultural and horticultural pests include-

1. Aphids- they are small, soft bodied sap sucking insects with or without wings and they belong to the superfamily of Aphidoidea which include greenfly, blackfly. About 25% of the all plant species are infested with aphids. All aphids have piercing-sucking mouthparts for phloem sucking and to excrete honeydew. They can reproduce asexually by producing 20+ generations per year. They feed from the phloem of the plants which they tap into with the stylets of their proboscis. They gain phloem from the plant roots, stem and leaves. The stylets of aphids are very thin as they can be damaged easily or can be directed into the unwanted direction while pushed into the plant. High level of nitrogen fertilizer favour aphid reproduction however, excess use of nitrogen should be prohibited as these aphids attack majorly the seedlings and reduce the growing ability so, preventive measures should be undertaken before seeding the seedlings. Moreover, there are various chemicals that can control the aphids like ACTARA (neonicotinoids acts on the brain of the pest inhibiting its reflex), CHESS (pests die because of starvation as it inhibits the feeding system), PIRIMOR (it acts on the nervous system of the pest which leads to the paralysis and then to death)

2. Thrips- they are minute, slender insects with unique asymmetrical mouth parts. They fly only weakly as their wings are inconvenient for the flight. They can reproduce asexually therefore because of lack of predators they increase their population exponentially. They are small hemimetabolic insect means its first 2 stages are known as nymphs and small wingless adults and then they form adults with cigar shaped body plan. They are haplo-diploid with haploid males forming from eggs and get adult and diploid females reproducing without fertilization. They are believed from a fungus eating ancestor during the Mesozoic, its many species feed on fungal spores. They are found economically significant for many species but some species are predators as they feed on the chloroplast and pollen and they prefer tender parts of the plant such as buds, flowers and new leaves. They cause damage to plants via feeding such as Thrips tabaci damages crops of onions, potatoes, tobacco and cotton. These may occur as leaf curls, rolls or folds or causing distortion to leaf blades.

3. Leidoptera- their names comes from the Greek word meaning scales and wings, this makes sense as the adults have wings and scales are the small flakes present on the wings. Their wings are covered with the tiny scales which give them color, rigidity and strength and their compound eyes consist of light-sensitive lens each forming own portion of the image. Their mouth parts are formed into a sucking tube called proboscis by elongation of gleae. Their life cycle consist of four stages that are egg, caterpillar, pupae and adult. Their activity period is nocturnal i.e. they are active during night. They lay their eggs in batches and they are sexually attracted via pheromones which means with the help of the smell produced by their partners they are attracted towards them. They are attracted towards the flower for its nectar and most of the larvae of moths are neroivores that is they eat either foliage or wood but some are carnivores as they eat other caterpillars or soft bodied insects. The larvae are beautiful but destructive as they eat the plants, crops for their development. The female can lay eggs from a few number to a number of 10,000 and when the caterpillars hatch from the eggs they develop instars over a period of few weeks.

4. Spider Mites- they are the family members of the Acari (mite) family Tetranychidae, which lives on the undersides of the leaves of plants, where they may spin protective silk webs and they cause destruction to crops by creating holes in the leaves while feeding themselves. They are of about 0.4 inches in size and their colour varies and they lay transparent eggs and spin silk webbing to protect their colony from predators. They can hatch eggs in 3 days and an adult can be formed in 5 days and one female lays eggs by twenty in one go and their life is of 4 weeks. Their countermeasures are easily available to the farmers as they are available in form of Neem oil, insecticidal soap, and acaricides. Mild CO2 enrichment has shown the increase in the mite production whereas, decrease in the oxygen and increased conditions of carbon-dioxide in increased temperature can lead to the death at initial stages of this mite.

5. Weeds- a plant could be undesirable at one place and could be desirable at another like goose grass, foxtail grass are valuable plants in pasture but in the crop field they are well known troublesome weeds. Weeds can be in the crop field due to two major reasons either because of farmer’s conscious effort or by invasion. Weeds can be aquatic or terrestrial and among them they can be native or alien. Native weeds are those which can be seen in the geographical area whereas alien are those which are not native of India, they were bring to nation from outside. Weeds which depend on the crop either partially or fully for their growth and development are crop bound weeds or parasitic weeds. They are of two types either root parasites like broom rape in tobacco plant or stem parasite like cuscuta in lucern and berseem plants.

6. Fungal pathogens- most phyto-pathogenic fungi belongs to the ascomycetes or basidiomycetes class which reproduce both sexually or asexually for the production of spores and later mycelia. Spores can travel via air, water, with insects like moths and other insects which are in search of nectar. They are saprotrophs which means they can carry out their life cycle in the soil. Fungicides can easily encounter them but they can evolve steadily and produce fungicides resistance species. Some species of fungal plant pathogens are Fusarium causing Fusarium wilt disease and Thielaviopsis causing black rot, canker rot, Verticillium spp.

7. Bacterial pathogens- most bacteria that are associated with crops or other plants are saprophytic in nature and don’t harm crops but there are some hundreds of bacterial species that can cause disease to crops, that bacteria are in rod in shape i.e. bacilli. There are several bacterial pathogenicity factors are known which include cell wall degrading enzymes, toxins, effector proteins, phytohormones and exopolysaccharides. There are various species that harm the crops using above mentioned factors like Erwinia specie uses cell wall degrading enzymes to create soft rot in plant and then harm the plant, whereas, Agrobacterium specie causes tumour in the plants and exoplysaccharides can block the xylem vessels and often lead to the death of the plant.

8. Viral pathogens- in normal conditions viruses leads to the crop loss and it is almost impossible to control these pathogens as they can be identified only when the symptoms appear in the plant and by that time it is too late to control them. Most of the viruses are single stranded RNA genomes but double stranded RNA genomes are also found in certain plants. Plant viruses are transmitted by vector but seed transmission and mechanical transmission is also possible. Vector transmission is usually seen with the help of insects, but some fungi, nematodes and protozoa can also act as vectors. The most common virus seen in most of the plants is curly top virus which is transmitted with the help of beet leafhopper causing small and shrink leaves, the chlorophyll of the leaves get destroyed and plants become dwarf and in some cases the leaves appear like rose of the branch.

9. Nematodes- they are small in size and are multicellular worm like organisms which are free living in the soil but there are certain species that can be detrimental to the plants. They mainly attacks the plant roots as they act as vector in spreading viruses to crops but they can be easily regulated by growing marigold flowers. They don’t decompose organic matter in the soil but they regulate the bacterial growth in the soil. There are several nematode groups that can cause crop lose in the field and certain species causes histological damage to the roots by forming visible galls in the roots. The Xiphinema index causes the grapevine fanleaf virus to the grapes.

10. Animal pests- rats are the main pests that affect the crops, more than 1% of the world’s crop is destructed by them and there are more than 50 diseases which are transferred by rats to humans. They damage crops by feeding them specially the ones which are stored, they damage the equipment like damaging the gates, destructing the electricity channels, damaging the bags in which cereals, rice and other crop food is stored. 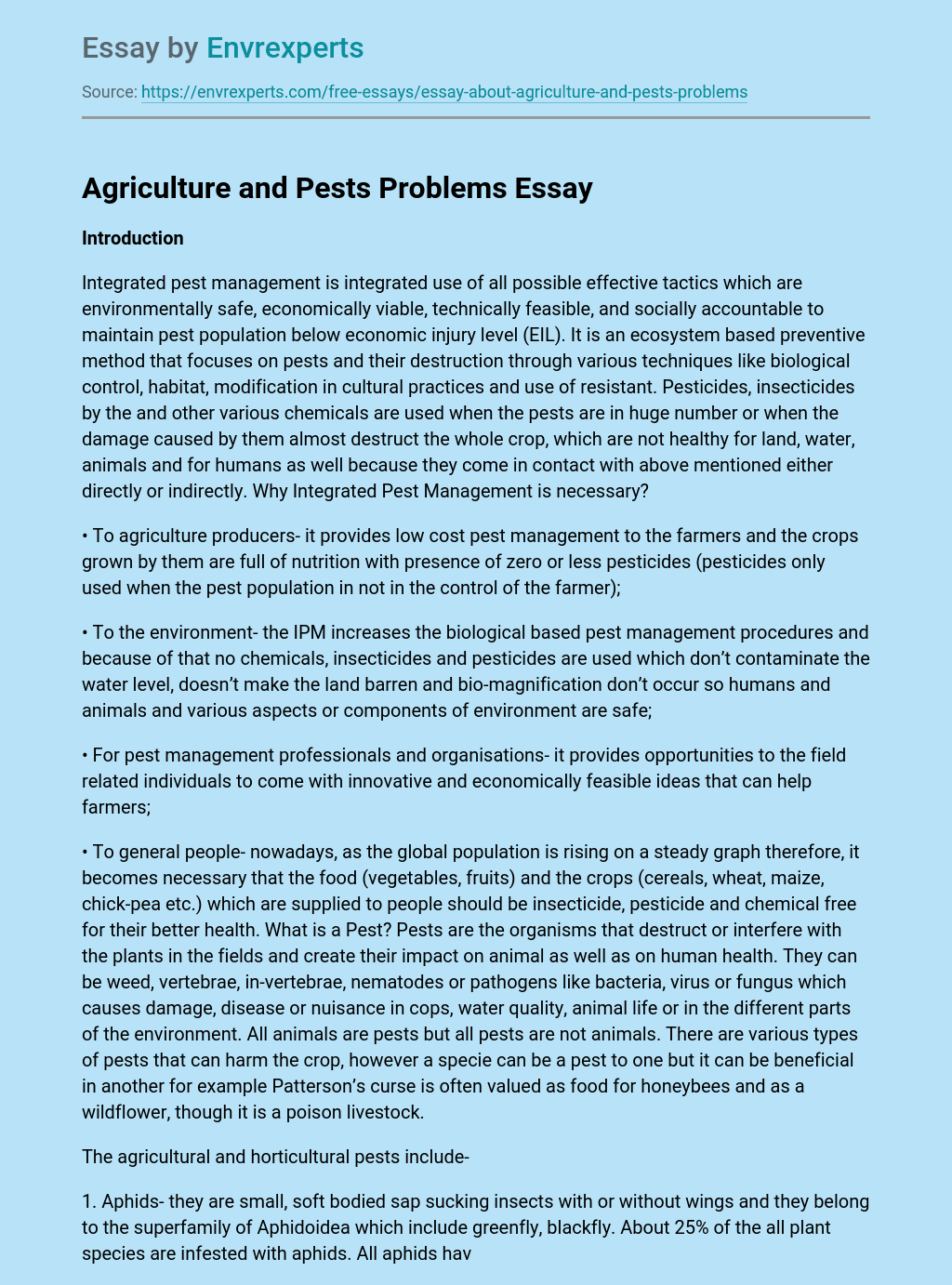