The present work examines the Impact of Agricultural Credit on Productivity of Sugarcane farmers in Chamarajnagar District of Karnataka. India is an agrarian economy nearly 65 per cent of working population engaged in agricultural sector. Development of agriculture purely depends upon the availability of finance. But the sources of agricultural finance are meager in the country, therefore in earlier days most of the farmers depends on local money lenders for their financial requirements. Usually they charged high rate of interest on loan amount, sometimes they exploited the farmers as they like.

Don’t waste time
Get a verified writer to help you with Agriculture in India, Karnataka
Hire writer
$35.80 for a 2-page paper

Govt. of India initiated to implement several measures to avoid the exploitation of the farmers by money lenders. As a result, soon after independence government of India introduce five year economic planning since 1951. First five year plan gives first priority to the development of agriculture and 20 private commercial banks were nationalized in the year 1969 and 1980. Therefore, nationalized commercial banks have taken several schemes and programmes for providing financial assistance to the development of agricultural sector.

Rain-fed agriculture contributes 44 per cent of the total food supply and supports 40 per cent of the population. Around 60 percent of the nation’s cattle wealth is concentrated in rain-fed regions. Agriculture in India has long history dating back to 10000 years. Today, India ranks second worldwide in farm output. Agriculture and allied sectors like forestry and logging accounted for 16.6 percent of the GDP in 2007, employed 52 percent of the total workforce and despite a steady decline of its share in the GDP, still the largest economic man and plays a significant role in the overall socio-economic development of India.

Agriculture is one of the most essential attributes of Karnataka economy. The topography of Karnataka and factors such as relief, soil, and climate immensely support agricultural activities in Karnataka. Agriculture is the primary occupations for the inhabitants of Karnataka. A majority of the people are involved in growing crops, especially in the rural areas. Agriculture in Karnataka has occupied around 12.3 million hectares of land, which accounts for 64.6 per cent of the total area. Agriculture in Karnataka is mainly done in three seasons namely, KHARIF (from April to September), RABI (From October to December) and SUMMER (From January to March). According to the Karnataka state Agricultural produce processing and Export Corporation limited (KSAPPEC), Karnataka agriculture is the means of livelihood for 65 per cent of the state population. The share of agriculture in the state GDP is around 16 per cent, which is higher than the national average of 12 per cent. Karnataka is also the first state to come up with a separate budget for agriculture in the country. Karnataka has 10.3 million hectors’ of cultivable area, nearly 80 per cent of which is now exclusively dependent on rainfall. Even after the development of irrigation to its maximum potential under a big push to irrigation in the immediate future, about 70 per cent of the cropped land would remain rain-fed. Yet the state has a favourable landscape for agriculture as 64.6 percent of the total geographical area is under cultivation of crops. Among the cultivation of various crops the state ranks 4th in the country in regard to cultivation of sugarcane. It contributes 7 per cent of the agricultural production of the country. About 83 percent of the total geographical area of the state is suitable for agriculture. Fertile soils and the presence of 10 agro-climatic zones make Karnataka produce a rich variety of agricultural and horticultural crops. The state ranks among the major producers of maize, coarse cereals, sugarcane, pulses and sunflower in the country.

Sugarcane is grown in 16 districts of the Karnataka state. Belgaum, Bagalkot, Bijapur, Mandya, Mysore, Chamarajnagar and Bidar are the major sugarcane producing districts. Chamarajnagar district plays predominant role in production of sugarcane production. Sugarcane is cultivated mainly by utilizing KRS (Krishna Raj Sagar) dam water, which normally supplements the water required for sugarcane for all its growth period. Majority of the farmers has getting financial assistance from various financial institutions in the district. Therefore, how the farmers of the Chamarajnagar district is depends the Commercial Banks and RRBs for their financial requirement is examined systematically. Socio-economic changes among the sugarcane growers in the area are quite evident. All out efforts are being made by the financial institutions to increase the living conditions of the farmers in study area.

Finance in agriculture is an important as other inputs being used in agricultural production. Technical inputs can be purchased and used by farmer only if he has money or funds. But his own money is always inadequate and he needs outside finance or credit. Agricultural finance capitalizes farmers to undertake new investments and adopt new technologies. The importance of agricultural credit is further reinforced by the unique role of Indian agriculture in the macroeconomic framework along with its significant role in poverty alleviation. Realizing the importance of agricultural credit in fostering agricultural growth and development, the emphasis on the institutional framework for agricultural credit is being emphasized since the beginning of planned development. Agriculture sector has received tremendous attention in the Indian Economy. As such, several measures have been taken by both the central and state governments over the years to provide free flow of agricultural credit. The availability of credit at subsidized rate has ensured that farmers are able to improvise the agricultural methods and several studies have shown that it improved the life of farmers. However, these loans have often turned out to be a burden for farmers, especially when the crops fail or prices drop. Agricultural Credit is most important to the farmers for their requirements. In India most of the Farmers run their productivity on the bases of loan and that loan is taken by the several sectors like Non-Banking, Institutional Banks, or Moneylenders etc. Chamarajnagar district is also one of the agrarian economy and 65 per cent of working population engaged in agricultural sector. In the below table, the total geographical area of the Chamarajnagar district is classified in to cultivable, cultivated and irrigated area. 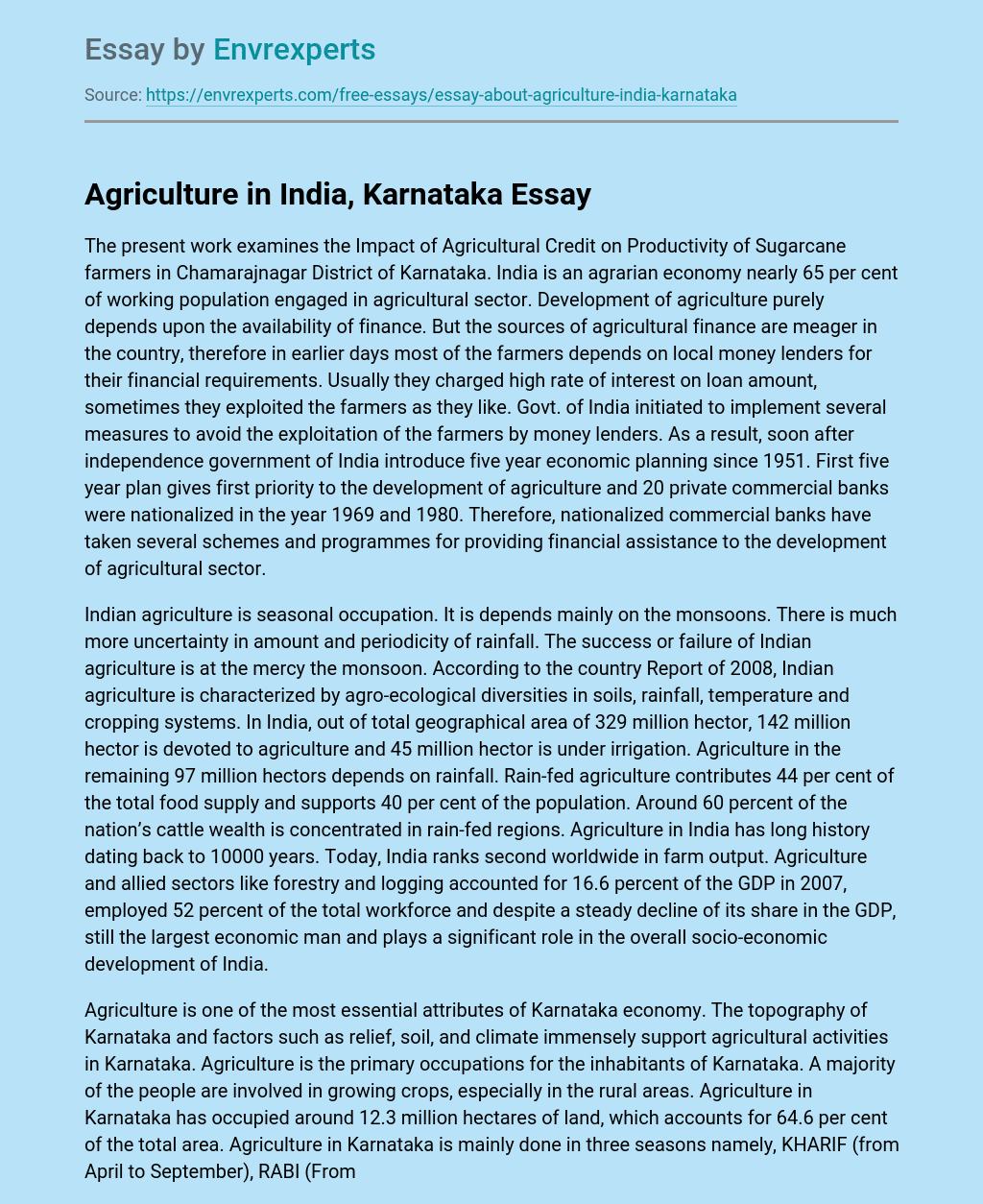