The Air Pollution in California

Although the population density, industry, and the wildfires are the main causes of air pollution in California, simple things that everyone can do such as recycling, commuting by public transportation would cut significantly the amount of greenhouse gas emissions

When thinking about California most of the people think of Hollywood, attractions, infrastructure and entertainments. All of the buildings and the roads build sparked the way to the economic development. The industrial revolution and the urbanization process in California made the cities become more and more populated.

Don’t waste time
Get a verified writer to help you with The Air Pollution in California
Hire writer
$35.80 for a 2-page paper

The industry and the urbanization process had a positive impact on facilitating individuals life. However, have we ever thought on how this development has impacted Mother Nature? Did the air quality on the urban areas change? First let’s start explaining what air pollution is. Air pollution is the mixture of particles and gases released in the air by emissions, factories and electrical plants.The consequences of the gases released in the air are harmful to the nature and humans.

Although the big population of California, the development of the industry and the wildfires are contributing to the air pollution and to the increasing of health problems such as ;asthma, heart attack and deaths among population, by reducing gas emission, investing in electric cars and planting more trees in the urban areas, the air quality of California would improve significantly.

Causes of the Air Pollution in California

California is highly affected by poor air quality. One of the main reasons California has a high level of pollution is because of the big population.

California is the most populous state in the United States, with a population of 39.5 million. ( ​U.S. Census Bureau, 2018)​. ​According to NASA satellites , there is a strong connection between urban population and pollution. In urban areas of California ,the air quality is worse than in the rural areas. One of the ways that population is contributing to the air pollution is by Greenhouse gas emissions. According to California’s Environmental Protection Agency, 37% of California’s greenhouse gas emissions comes from the transportation. Factors such as; improved economy, growth of the population and cheaper fuel prices, are enabling the usage of vehicles. The release of nitrogen oxides, carbon monoxides, carbon dioxides and particulates by vehicles, are responsible for the air pollution of California. According to the United States Environmental Protection Agency, a passenger vehicle emits 4.6 metric tons of carbon dioxide in a year. Therefore, taking into consideration the dense population of California, it is obvious that the carbon dioxide level would be significantly high.

The second higher factor that is contributing to the air pollution in California is the industry. According to the Environmental Protection Agency of California, 21% of the greenhouse gas emission in California is comes from the industry. (​California Greenhouse Gas Emission Inventory, 2018)​. ​Most of the California’s refineries are located in San Francisco and Los Angeles. Statistics from the California Energy Commission show that approximately two million of barrels 42 gallon each are processed daily in California. The main product that is refined from these refineries is gasoline. Although having a developed industry creates a stronger economy, the release of the chemicals into the air are a major source of hazardous and toxic air pollutants such as benzene, toluene and ethylbenzene. Other air pollutants that are emitted by the factories and refineries are nitrogen oxide, carbon monoxide, hydrogen sulfide, and sulfur dioxide.

Air pollution contributes to climate change. For many years researchers and scientists are working on educating the population on the importance of climate change. As the scientists keep warning individuals of the serious effect that climate change has on the atmosphere, individuals have to take this issue seriously and take action as soon as possible. According to NASA, carbon dioxide that is emitted into the atmosphere is one of the main causes of Global Warming. The pollution from the combustion of fossil fuels, enables the release of carbon dioxide, nitrogen oxide,etc into the air. This makes the gases released to get trapped into the atmosphere and absorb sunlight, therefore earth’s temperature raises. As a result of a hotter earth, several changes would happen. Firstly, there will be extreme weather temperatures that would highly affect California’s economy and safety. For instance, According to ​Diffenbaugh, Noah S., et al, between 2012-2014, California has experienced the driest period over a millennium. ( ​Noah S., et al,2015).​ This would cause water shortage, which affects the agriculture and endangers the wildlife. Secondly, global warming would raise sea level. This would cause the melting of the glaciers and could be the cause of coastal flooding. The National Research Council predicted that California’s sea level would rise up to two feet by 2050. The coastal flooding in California would not just threaten the western population, but would also cause significant damage on the agriculture and infrastructure.

Another negative effect of California’s air pollution is the increasing of health problems. Living in a polluted environment is linked closely to asthma, heart attacks and deaths. According to the American Lung Association ,over five million individuals in California have been diagnosed with asthma. Asthma is a chronic disease that is caused by particulate, nitrogen and oxides of sulfur. The individuals who have asthma experience shortness of breath, chest tightness, and coughing or wheezing. Therefore, many times these individuals have to limit their physical activities. Moreover, over a million of the individuals affected are children. In addition, Marsa Linda in her periodical​ Breathless, s​ tates​:​ “On average, nearly four Central Valley residents die prematurely every day because of the pollution, and experts predict that within the next few years, as temperatures continue to rise and population growth raises smog levels, one of every four children will have asthma”( Marsa Linda, 2013)​.​ ​Moreover, the air pollution in California is also contributing to heart attacks and deaths. According to the Environmental Protection Agency, d​uring the wildfires In California, the smoke caused a 42% increase in ED visits for heart attack and a 22% increase in visits for ischemic heart disease. These numbers show clearly the effect that smoke has in humans body. In addition, heart diseases are causing deaths. ​According to World Health Organization, urban pollution causes approximately 4.6 million deaths worldwide.

Solutions to the Poor Air Quality of California

In order to help California with the air pollution, the state has taken serious steps. Although the air quality of California is concerning, there are solutions that can have a great impact on lowering the pollution. One of the most important initiatives to reduce the diesel emission of trucks, ships and other diesel engines happened in 2005, DERA ( Diesel Emission Reduction Act) . The government acquired fund to Californians to rebuild diesel engine or to install emission reduction system. Another huge step to help on California’s air pollution was done under Obama’s administration in 2012. Under Obama’s administration, California was allowed to establish its own regulation about diesel emission. By doing that, the government gave the right to California to set stricter regulation about greenhouse gas emission that were predicted to improve the air quality 40% by 2030.

The usage of electric and hybrid cars would have a great impact on reducing the air pollution. The reduction of the usage of personal vehicles would cut significantly the traffic and would also reduce the carbon dioxide that is emitted by the cars. Therefore, the population is often encouraged to use the public transportation. However, for individuals who rely on their vehicles to commute, there are environmental friendly options. An effective way of helping reduce the air pollution is investing on a hybrid car. Hybrid cars use gasoline engine and also an electric motor. The usage of hybrid cars would reduce the pollution and also would save drivers money on fuel. An electric car is also a good investment for the pollution and the economy. California is giving up to 7500$ federal tax credit for buyers of electric cars. In addition, the state is also giving a rebate of 2500$. ​This way people are getting rewarded for their contribution on helping with the environmental pollution, that does directly affect their wellbeing.

Another way of improving the air quality is by planting more trees and educating the young children on the importance of the air quality. Although we all learn about trees, flowers and nature at a very young age, sometimes when we grow older we forget to apply the principles we have learned in our real life. Therefore, instead of planting more trees, people usually cut them for their own interest. An academic journal by ​Nowak, David J., et al, reinforced the importance of having trees planted after measuring the air quality in different urban areas of the United States. They arrived at a conclusion that the air quality in urban areas could be improved significantly by planting more trees. According to the study, urban areas that had trees had much cleaner air than the urban zones without trees. The process of photosynthesis would make trees release more oxygen in the polluted areas and therefore the air quality would improve significantly. In addition, California should adopt education initiatives that encourage and guide children to be part of solving environmental pollution. For instance, Growing Up Green Charter Schools, in New York, educates students about the importance of recycling, environmental sustainability, and pollution. Their mission is to educate children at a young age to be part of their community by engaging in activities that help the environment.

In conclusion, the population has to be conscious of the consequences that come as a result of a polluted air. Although the population density, industry, and the wildfires are the main causes of air pollution in California, simple things that everyone can do such as recycling, commuting by public transportation would cut significantly the amount of greenhouse gas emissions. In addition, volunteering in the community by adding more green zones, caring about trees and the environment, will also have a great impact in improving the air pollution. Even though these steps are simple, they are significant enough to make a change. Therefore, we should be role models to the younger generation. In addition, we should also encourage other adults to participate in making the urban areas cleaner. After all, the air pollution does not only affect the nature, but it affects directly our health.

The Air Pollution in California. (2021, Oct 31). Retrieved from http://envrexperts.com/free-essays/essay-about-air-pollution-california 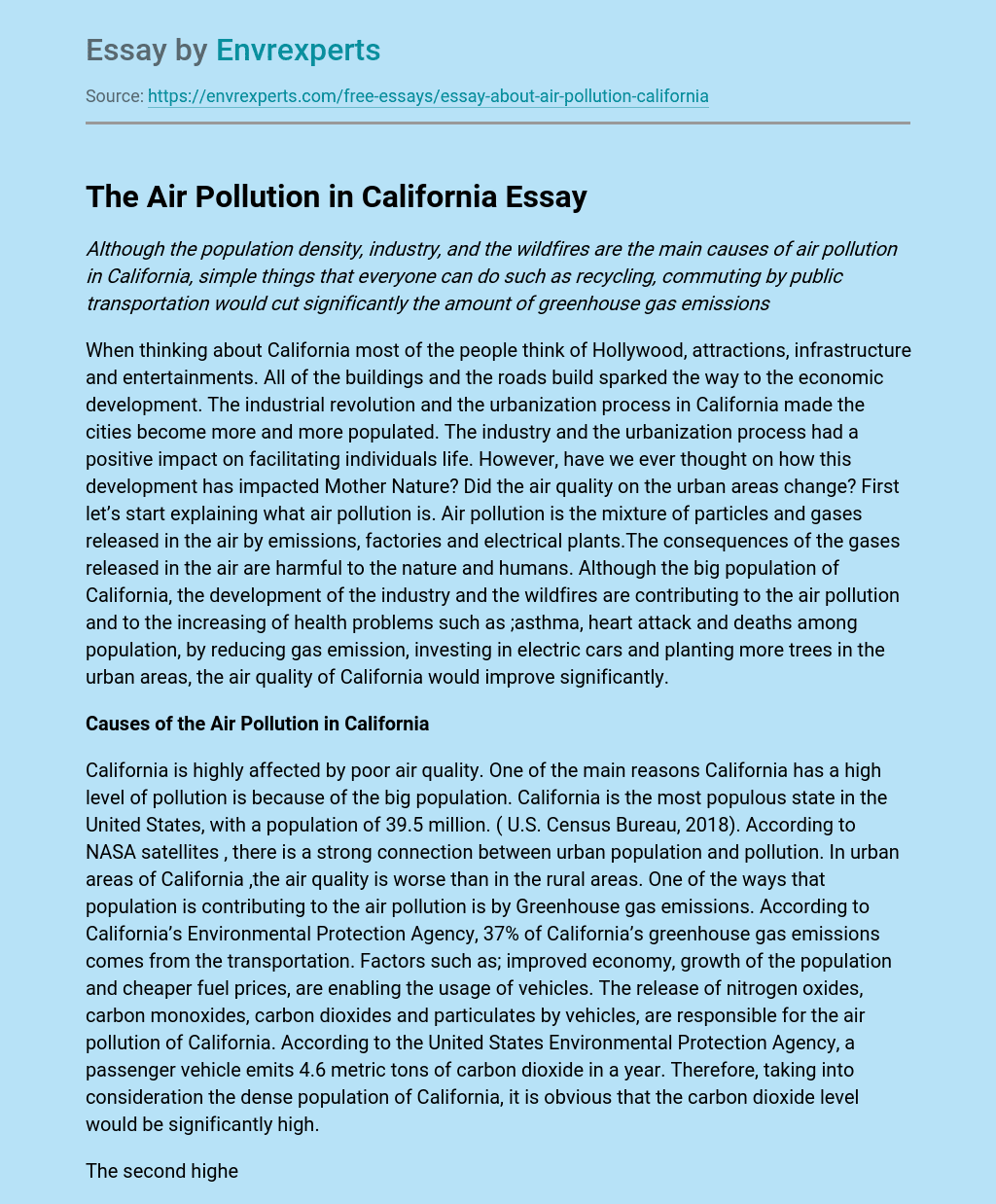