According to BMWi (2016), space heating and preparation of hot water consumes more than 80% of the energy expenditures of private households in Germany. Destatis (2010), shows that oil and natural gas are the two most widely used fuels for residential heating systems, which accounts for almost 83% of residential sector CO2 emissions and this corresponds to about 25.7% of the total CO2 emissions in 2008.

This confirms the role of residential heating with regards to environmental degradation; especially air pollution. There have been several concerns in recent years on how to minimize the emission CO2 into the atmosphere.

Don’t waste time
Get a verified writer to help you with Air Pollution: How People Generate CO2 in Daily Life
Hire writer
$35.80 for a 2-page paper

Beyer et al. (2010), stated that Implementing more environmental friendly policies in the building sector could save about 18 million tons of CO2in the year 2020. Researchers are motivated by the fact that, to save the environment, it is very important to start with fuels that households use to pollute the environment. Before the researcher arrives at this point, they try to find out the factors that determines households fuel type preferences.

This research contributes positively to a better policy that is geared towards influencing residential energy consumption. In Germany, the government has a long-term plan (Energiekonzept) which was announced in 2010. It has the sole objective of reducing primary residential energy requirement by at least 80% by 2050 and to cover the remaining demand of energy with renewable (Bundesregierung, 2010).

The Aim of the research to determine the factors that motivates household’s decision to adopt innovative Residential Heating System (RHS) and to also discover if these factors cut across existing houses and newly built houses.

The data used in this research was a survey conducted purposely on households who received financial grant from the German Federal Office of Economics and Export Control between January 2009 and August 2010.

These households installed a new Residential Heating System which was either fully or partly renewable based energy.This study uses a multinominal logit approach. Residential heating has gained much attention over the past decades. Vaage (2000), Liao and Chang (2002), Dublin and McFadden (1984), among others have carried out a similar experiment which applies a discrete choice model on households energy behaviour.

They conducted their various studies to find out households behaviours on a particular energy appliance. However, there have been studies as well in this direction in Germany (Rehdanz. 2007: Schuler et al., 2000). This study explores the determinants of residential heating system in great detail. It focuses not only on factors such as socio-economic factors, home characteristics, spatial characteristics but also the attributes of the Residential heating system itself; such as Environmental benefits, comfort, supply of energy among others.

Several studies ignored this aspect in their findings. This study adds to existing research to examine the decision-making process of households before they adopt an innovative RHS. This serves as a good platform for policy makers to make strategic decisions to affect household behaviour. The remaining of the paper is as follows; the next section describes the Literature review.

Section 3 introduces the experimental setting and the data used for the empirical analysis. Section 4 talks about the main results and discussion, my conclusion will be presented in section 5. Several human behavioural studies have put forward to explain consumers’ adoption of new technologies. They key findings is that; technology adoption and diffusion is not a straight forward process.

Theory of Reasonable Action (TRA) (Fishbein and Ajzen, 1975) and Theory of Planned Behavior (TPB) (Ajzen, 1985, 1991), categorizes the adoption of new technology in the following broad categories; attitude towards behavior, subjective norm and perceived behavioral control. Davis (1989) also categorized the adoption of technology into Perceived Ease of Use and perceived Usefulness.

There have been other theories explaining the adoption process of technologies but they all assume that; individual’s rational behavior is driven by their beliefs. In listed models above, it is shown that attitudes majorly depends on the perceived performance of the technology and subjective norm. Other researches also explain the adoption decision of technology with cognitive and normative approaches. These approaches, however also predicts that; there is a positive relation between individuals perceptions and their behaviors.

Diffusion of renewable energy refers to the spreading process of these energy systems across a population. The fact that there are available and more environmental friendly options does not mean the entire population will jump unto it. Consumers are more sceptical about the performance and ease of use of the new product. They are mostly unable to see the reason to switch to these new technologies. With respect to economic trends, consumption of energy is on the rise. Energy is demanded by households to power their machines and other tools.

The main decision of the household is to decide which energy system to install in their various homes to boost their utility. In the short-run, households have the tendency of considering mainly cost before it installs a particular heating system. Following this goal, a number of policies have been implemented to help achieve this. For instance; the Market Incentive Program offers financial support for home owners installing a heating system. This study presents a number of fuel types and residential heating systems that are being used by households.

There are studies that stresses on residential space heating using data from different regions. Vaage (2000), Liao and Chang (2002), Dublin and McFadden (1984), among others have made studies using logit models to explain the behavioural pattern of households and their choice of energy appliances and the corresponding energy consumption.

Braun (2010), shows that home characteristics are positively related to the decision making process of households as to which heating system to adopt. There are other studies for instance Achtnicht (2010) that investigate the willingness to pay and adopt residential heating systems of households. 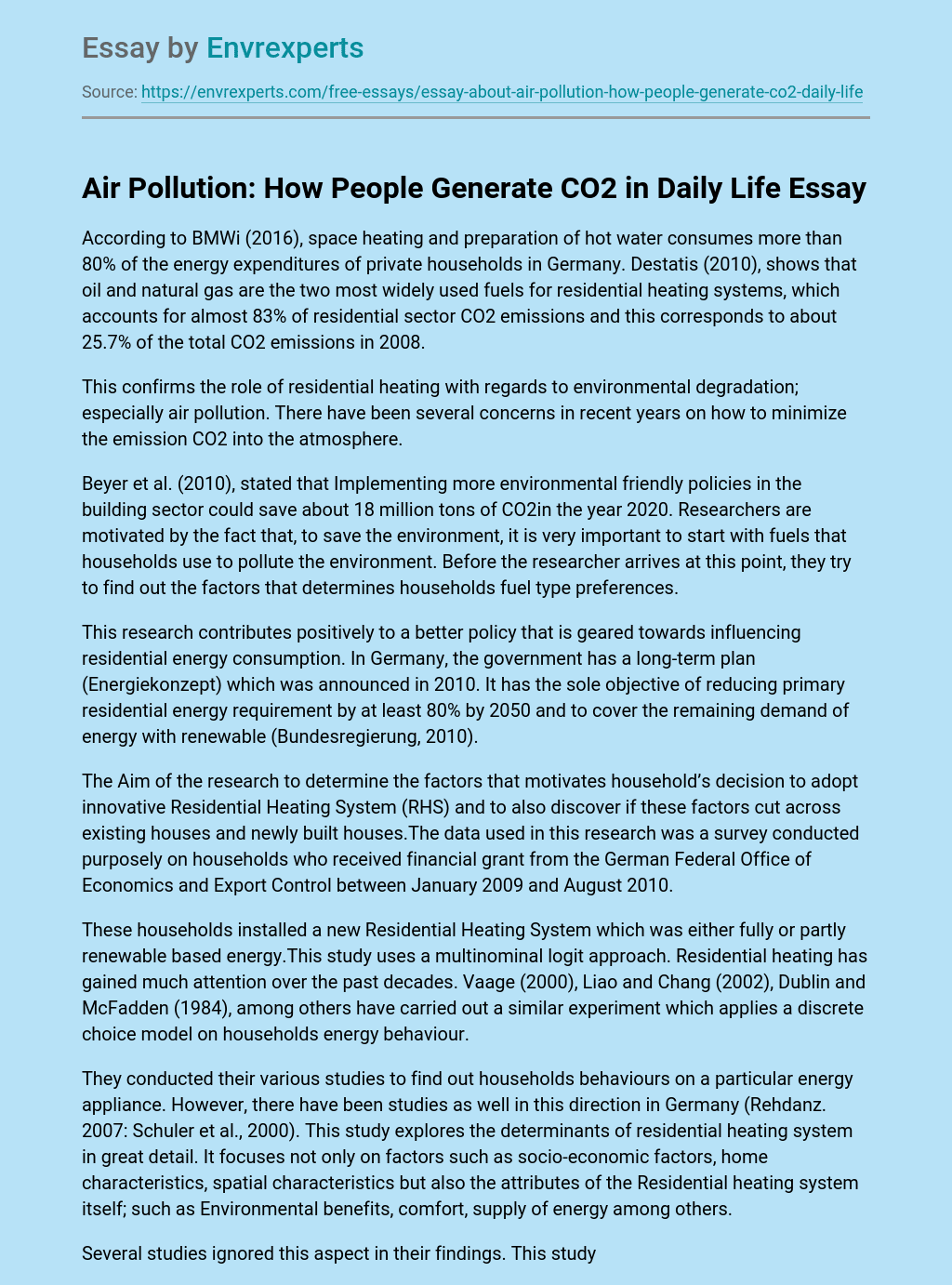