Air quality in the San Joaquin Valley is very poor.

Don’t waste time
Get a verified writer to help you with Air Pollution in San Joaquin Valley
Hire writer
$35.80 for a 2-page paper

According to Cramer and Cheney (2000), during the summer, the San Joaquin Valley experiences warm and dry days. The average temperature is around 90 degrees and can reach over 100 degrees on certain days. During the winter, the valley’s weather cools down. The climate throughout San Joaquin Valley contributes significantly to the poor air quality. Ozone is considered a secondary pollutant formed by chemical reactions between reactive organic gases and oxides of nitrogen.

In order to manage air pollution more effectively, California has 15 different air basins. The areas within each basin have similar features (geographical & meteorological). The basins are different in sizes, some are large, and some are small. The San Joaquin Valley air basin is surrounded by mountains (California Air Resources Board, n.d.). To the west of the San Joaquin Valley, the Coast Mountain range lies. The Coast Mountain peaks can be more than 5,000 feet high. Towards the east of the valley lies the Sierra Nevada mountains, with peaks more than 13,000 feet high. To the south of the valley lies the Tehachapi Mountains, with peaks more than 6,000 feet high. The valley does not have any mountain ranges to the north of it (San Joaquin Valley Air Quality, n.d.).

As mentioned earlier, there are three mountain ranges surrounding the basin, Coast Mountain, Sierra Nevada, and Tehachapi Mountains, each of these mountains prevents air from flowing into and out of the valley. The San Joaquin Valley basin also experiences poor wind patterns. The wind is a form of transportation for pollutants. The wind transports pollutants from the bay area into the basin. However, during the day pollutants can be transported out of the San Joaquin Valley basin through the south. At night, pollutants cannot exit the basin, through the south, because of cooler winds produced by the mountain ranges surrounding the basin. Due to this, the wind circulates back into the north (San Joaquin Valley Air Quality, n.d.).

The San Joaquin Valley has a large population that has continued to grow throughout the years. Population growth is a factor that has affected the amount of pollution in the valley. A higher population means more sources of pollutants. Human activity is one source that causes pollution. According to Cramer and Cheney (2000), there is a positive relationship between population and emissions. As one increases, the other does as well (Cramer & Cheney, 2000). Pollution is produced through many human activities, such as recreation, heating, etc. However, most of the air pollution in the San Joaquin Valley is produced through agricultural production (Lin, 2013).

As mentioned earlier, the San Joaquin Valley contributes significantly to California’s agricultural production. Due to this, the valley uses a variety of agricultural equipment and practices that contribute to the valley’s pollution problem. For example, the vehicles used for production emit certain gases, such as ammonia and carbon monoxide. These gases can lead to secondary pollutants being formed (Lin, 2013). Not only that, but fertilizers and livestock also contribute to pollution (Lin, 2013).

According to Kim, Helfand, and Howitt (1998), air pollution in the San Joaquin Valley is affecting agricultural production in the region. The San Joaquin Valley produces about 60% of California’s crops. As mentioned earlier, the San Joaquin Valley experiences high levels of ozone. The valley grows numerous crops which are very sensitive to ozone. These crops include beans, onions, lemons, oranges, grapes, and cotton. The valley’s ozone concentration is higher than these crops can withstand, thus leading to crop damage. Crops throughout the valley are affected by high concentration of ozone by minimizing photosynthesis (Kim, Helfand & Howitt, 1998).

Less crops, in turn, means less income and higher prices. It is estimated that 34% of orange production will be lost due to high concentrations of ozone (Kim, Helfand & Howitt, 1998). This affects the economy in a bad way. If there is a surplus of crop productions, market prices would decrease. However, if there is a shortage of a certain crop, market prices can increase. For example, the San Joaquin valley produces more than 85% of grapes (Kim, Helfand & Howitt, 1998). If the production of this crop was affected, there would be a change in the market price.

Air pollution in the San Joaquin Valley and throughout the Unites States has a major effect on human health. There have been many studies that have analyzed the effect of ozone on human health. It can cause chest pain, coughing, and more serious effects such as respiratory diseases. The residents throughout San Joaquin Valley suffer from high rates of asthma (Meng et al., 2010). In 2001, the California Health Survey was conducted, and its results revealed that Fresno was among the top counties in California that showed a high prevalence of asthma. The California Health Survey also revealed that other counties throughout the San Joaquin Valley, such as Merced, Tulare, San Joaquin, etc., had a high rate of asthma related emergency room hospital visits (Meng et al., 2010).

Environmental pollutants can also cause or enhance cardiovascular diseases. According to Zorana (2012), diabetes is becoming more prevalent throughout the United States. There have been recent studies that have found an association between diabetes and air pollution. In a study conducted in the United States, individuals with diabetes were found to be more sensitive to air pollutants than individuals who did not have diabetes (Zorana, 2012). There is evidence that exposure to particulate matter pollution can affect blood glucose, cause insulin resistance, and tissue (adipose) inflammation (Zorana, 2012).

Clearly, air pollution affects everyone. However, the effects are different depending on an individual’s/group’s socioeconomic status. According to Gray, Edwards, Schultz, and Miranda (2014), minority groups and those who are economically disadvantaged are affected more by air pollution. The areas these groups live in tend to experience greater levels of air pollution. Due to constant exposure to air pollutants, these groups tend to have poorer health compared to other populations (Gray, Edwards, Schultz, & Miranda, 2014).

There are also certain disadvantaged age groups that air pollution negatively impact. These groups are children and the elderly. Children are at great risk because they are constantly being exposed to air pollution. They are still developing and breathing in polluted air can have a lasting impact on their lungs. There have been studies that have examined the relationship between lung growth and air pollution. They found that adolescents who lived in areas of higher pollution as children have a higher risk of smaller lungs (Children and Air Pollution, 2018).

The elderly are highly susceptible to health diseases and air pollution has a different effect on their overall health. As you age, lung function reduces. Due to this, being exposed to air pollution can dramatically affect an elderly individuals’ lungs. This group may already suffer from pre-existing health conditions and being exposed to pollutants may worsen their health. It may even be fatal. Studies have shown that this group is particularly affected by particulate matter pollution (Simoni et al., 2015).

According to Ganesh and Smith (2018), California has become warmer over the past years. It is the warmest it has been since data collected from 1949-2005. The data up-to-date reflects an overall increase of 3 F since previous years. In the San Joaquin Valley, there have been low levels of precipitation which have led to droughts during the years 2012-2014. These years are reported to have had the highest temperatures as well as being the driest. As mentioned earlier, the valley has the one of the worst air qualities. An increase in temperatures could increase air pollution. It was discussed that Ozone is typically higher in the summertime. If temperatures continue to increase, ozone concentration will also increase. Particulate matter concentration will also increase (Ganesh & Smith, 2018).

Thus, health, economic, and social problems will continue to prevail. The cost of healthcare will increase over the next years. Higher healthcare costs affect everyone but will have a more dramatic impact on special populations, such as low-income. The cost of controlling pollution will increase and there will be more government spending focused on creating healthier air. This means there could possibly be less spending on other areas, such as education, military, etc.

In order to help reduce air pollution in the valley, the Air Pollution Control District has kept an eye on the concentration of air pollutants through monitoring sites. According to the California Air Resources Board, there are a total of 38 air monitoring sites throughout the San Joaquin Valley. The sites measure air pollutants which the EPA has listed as health hazards. These hazardous pollutants include particulate matter (PM10 & PM2.5), ozone, sulfur oxides, carbon monoxide, hydrocarbons, etc. In addition, during the summer there are also five Photochemical Assessment Monitoring Stations that capture VOCs, or volatile organic compounds (Air Monitoring, n.d.).

In 2004, the Air Pollution Control District adopted the Extreme Ozone Attainment Demonstration Plan. Although it as adopted in 2004, it was disregarded in 2005 and was not implemented until 2010. This plan was designed to reduce ozone air pollution. It was developed to provide healthier air throughout the valley and to also meet federal/state ozone requirements. In 2007, the Ozone Plan was adopted (Ozone Plans, n.d.). This plan was designed to reduce particulate matter and ozone in the valley. The Ozone Plan also called for technological advancements that would help reduce pollutants. Recently in 2016, the Ozone Plan was updated and called for meeting the eight-hour ozone requirement set in a plan introduced in 2008. The 2016 Ozone Plan called for further reductions of air pollutants. The district has implemented various particulate matter and ozone reduction plans throughout the years and has successfully managed to reduce emissions by 120,000 tons (Ozone Plans, n.d.).

In addition to the implementation of these plans, the district has also received millions of dollars in funding through the EPA. The district is continuing to research new developments in technology. These technological advancements will help reduce pollution caused by engines. The district has also done research related to health effects of air pollution. The EPA and the San Joaquin Valley District also inspect facilities throughout the valley to ensure that they are not violating their permits, which monitor emissions. If a facility is in violation, they are charged a hefty fine. In 2012, Kern Front Oil Field were fined $34,000 because they did obtain permits to emit greenhouse gases. Also, in 2012, Ralcorp’s Cottage Bakery was fined more than a million dollars for violating air pollution regulations (United States Environmental Protection Agency, 2018).

In conclusion, air quality in the San Joaquin Valley is very poor. This is due to a variety of factors including geographical, metrological, agricultural production, etc. Air pollution has many negative effects on the economy, human health, and socially. There have been efforts to try to reduce the amount of pollutants in the air. Pollutants have reduced but there is still a long road ahead to have healthier air. 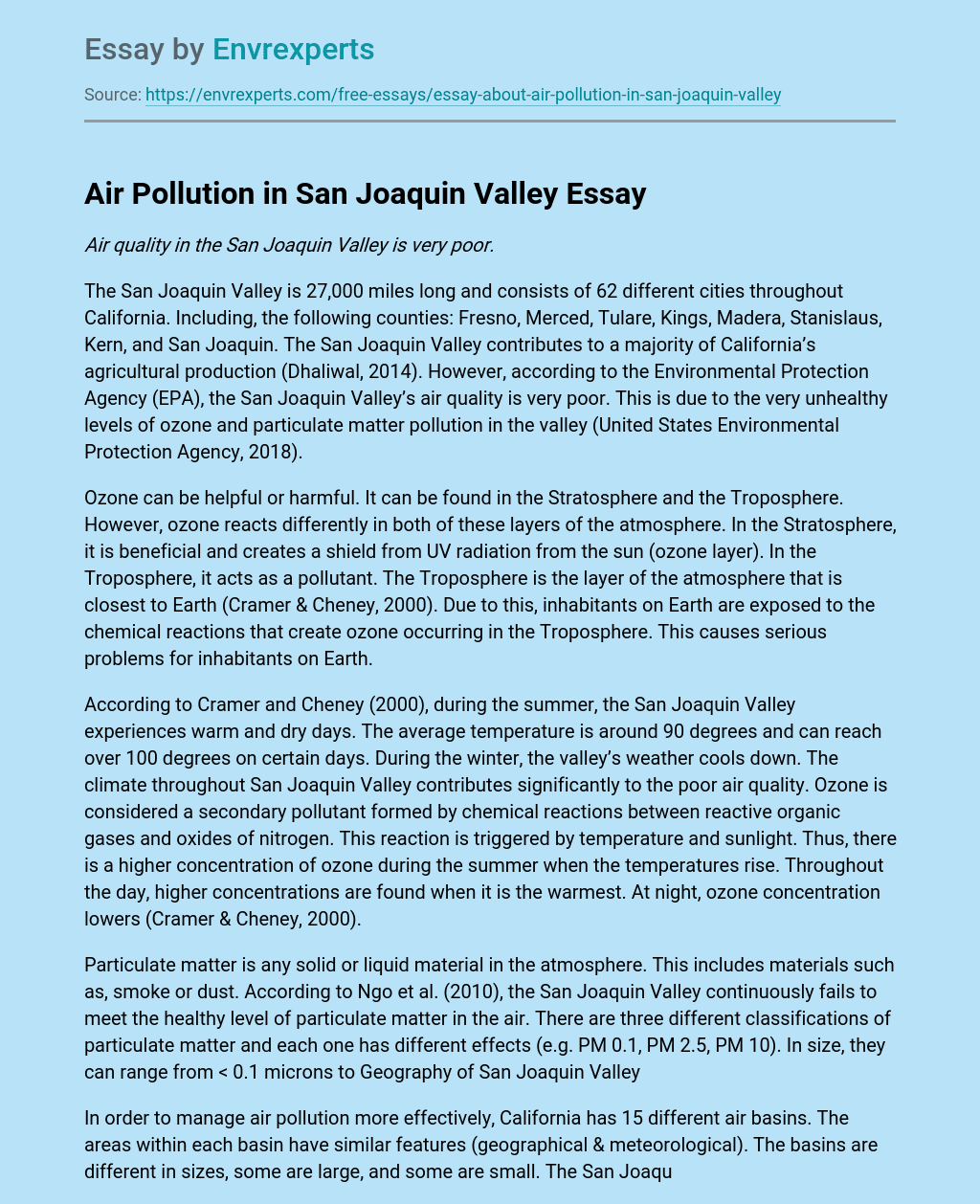