One of the strongest influences on domestic indoor air quality in rural area is the type of energy used for cooking, heating and other household purposes. Use of biomass fuel can result to respiratory infections and other diseases which may lead to death. This study will examine the level of indoor air pollution as regards to particulate matter (PM2.5) and carbon monoxide (CO), in 4 rural areas of Edo state,

Nigeria where the main source of energy is fire wood(trees from the forest).

Don’t waste time
Get a verified writer to help you with Air Quality in Rural Area
Hire writer
$35.80 for a 2-page paper

Other factors like energy types, pattern of use, ventilation will also be considered in this research work. Real time monitoring of PM2.5 and CO will be carried out in 10 households of 4 rural communities using Air quality meter and carbon monoxide meter. Women, mostly responsible for cooking in the households selected will be interviewed.

Questions will mostly be based on the type of fuel used, cooking pattern, and knowledge about the risk associated with the fuel types they are using, and perception about the consequence of tree felling on the environment.

Readings from the indoor air quality meter and carbon monoxide meter will be recorded at intervals for an average time of 8 hours in each household.

The mean average indoor concentrations will be calculated. The data obtained from this study will be analyzed in terms of Environmental protection agency (EPA) acceptable standards. The necessary recommendation will be made. Using a more cleaner stoves will save the people and the environment because forest trees are being depleted and also this act contribute to outdoor air pollution as well.

Over half the global population relies on wood for their domestic energy requirements (Ezzati et al., 2004). The end result when burned indoors in open fires is high concentrations of harmful smoke and particles released into the air. Toxic harmful gases like Particulate matter (PM), carbon monoxide (CO), oxides of nitrogen, sulphur dioxide(SO2) and volatile organic compounds are released into the living environment (Smith, 1987; Bruceet al., 2000). These toxic pollutants in a confined space and high concentration constitute indoor air pollution.

This is as a result of the reliance of many low-income households on biomass fuel combustion for heating, cooking and lighting. A study conducted in three rural provinces of South Africa (Eastern Cape, Kwazulu Natal, North West) showed a high percentage of the respondents used wood as one of their energy source (fredl et al., 2008). Although most biomass is used in un-electrified rural areas, there are pockets of biomass dependent communities within the urban landscape of metropolitan cities. Such communities are specifically in informal settlements.

Indoor air pollution studies in Nigeria are few. This is particularly so in the rural countryside where majority of the households rely on wood energy fuels for Cooking and other domestic activities. In these areas, the levels of indoor air pollution have not been adequately examined.

In many of the rural households, fuel is burned indoors or poorly functioning stoves, often with no means of ventilation or smoke extraction (Fredl et al., 2008). As a consequence, large numbers of women and young children are exposed to high levels of indoor air pollution.

Exposure to the smoke increases the risk of the households suffering from a number of health conditions and also affect domestic animals and pets around that vicinity. Indoor air pollution studies in rural are scanty and so Information on the various pollutants and exposure level are not available (Bruce et al.,2000). Also there is no much awareness of the consequence of using domestic fuel, most of the rural population are ignorant. These wood being used are extracted from the forest without replacement, this act also affect the broader environment.

The study findings would be important in guiding policy interventions on rural household energy. These interventions should be aimed at empowering households to Shift to less polluting fuels, use of improved and effective stove. There is need to look into which interventions works and how they can be implemented in a successful, sustainable and financially viable way. This would increase public health benefits from reduction of indoor smoke while at the same time reducing adverse environmental impacts (deforestation)

This study will be assessing the level of household pollution in communities of Edo State, Nigeria using wood fuel types as energy and health implications of the pollutants and the broader implications to the environment. Specific objectives are listed below:\n To check the concentration of carbon monoxide (CO) and particulate matter (PM2.5) based on the type of fuel used for cooking.

To look at how often they get woods from the forest for this purpose To assess the level of awareness of the households on the health implications associated with wood as energy source. To assess their perception of tree felling

This study will be conducted in four rural areas of Edo State, Nigeria where wood serves as a major source of energy Edo is a state in the southern part of Nigeria with a total land mass of 17,802 km2, Edo state was created in 1991 from the northern portion of the former Bendel State, and most of the area is covered by tropical rain forest.

Agriculture is the main stay of the economy; yams, cassava, palm oil, rice and maize are the major subsistence crops. The state is inhabited largely by the Edo (Bini) people, who are linked to the historic Benin kingdom.

The research design that was used in this study was the mixed method approach which employs both quantitative and qualitative data collection and techniques. Quantitative approach involved the use of questionnaires on a sample of households from the local community.

Most important, the level of carbon monoxide (CO) and particulate matter PM2.5 in each of the selected households will be monitored using auto samplers. The result from each household will be collected and compared to acceptable standards. The qualitative evaluation employed focus group discussions and post interviews. Four rounds of focus group discussions will be organized, one per community.

A total of 40 household will be selected for this study, 10 house hold per community, the selection process will be random but based on the energy type being used in these household. Questionnaire will be administered to each house hold and the mainly will relate to the objectives above. There will be face to face interviews and focus group discussions.

The PM and CO level of concentration will be measured using air quality meter, 1 each will be installed in the households. It will measure the level of PM and CO at different time of the day, mostly at the time of use of wood energy either for cooking purposes or for source of heat during cold seasons 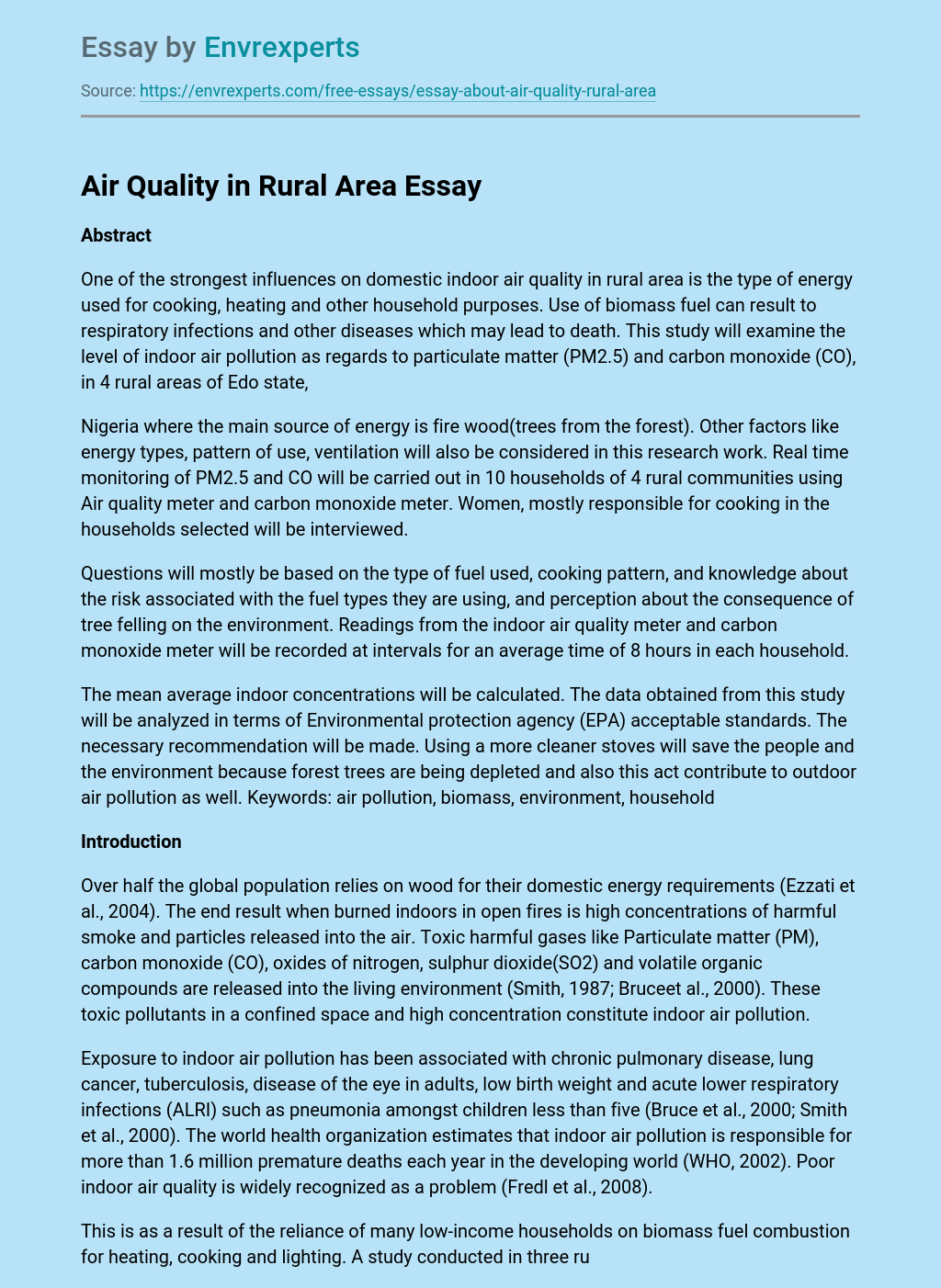