Lower income household in rural and peri-urban areas of Bangladesh, rely primarily on biomass fuels for cooking and other energy purpose. Begum et al.(2009) carried out an investigation to study the impact of fuel types and use in kitchen, kitchen location, and ventilation rates on indoor air and apportion the possible source contribution from the measured trace metal concentrations and black carbon (BC) concentrations of indoor particulate matter collected during investigation.

Sampling was conducted during the months of February and March 2006 in a rural area of savar in the Dhaka district.

Don’t waste time
Get a verified writer to help you with Air Research in Bangladesh
Hire writer
$35.80 for a 2-page paper

Five houses were chosen depending on the fuel use and kitchen configurations. Five PM10/PM25 samples (four from the kitchen and one from the living room) were collected from each house using mini vol portable air samplers (Air metrics, Eugene, OR, USA).

The PM10 samples were collected at different intervals from the cooking periods to the living room and outside the house (to assess the influence of ambient air pollution on indoor air quality).

The concentration of black carbon in the fine fraction of the sample was determined by reflectance measurement using an EEL type smoke stain Reflectometer.

A radioisotope induced energy dispersive x-ray fluorescence (EDXRF) spectrometer was use to analyze the elemental composition of all the samples. After all test and measurements were done, it was found that the low grade fuels contain high molecular weight hydrocarbons that produce high concentrations of organic carbon during the combustion process, also as a result the amount of PM25 increased.

In conclusion it was observed PM concentrations are lower in households using LPG (a cleaner fuel) than others using biomass.

It was also observed that the position of kitchen and ventilation practice can influence the decrease in concentration of PM (Begum et al., 2009). 5 Jiang and Bell (2008) also conducted a study in Northeastern China to examine the level of particulate matter in biomass burning rural households compared to a nonbiomass burning urban households.

A total of 6 rural and 6 urban households were surveyed and particulate matter monitors were used to measure the level of PM in these households. Researchers also recorded time activities depicting the participant’s activities and locations throughout the day. The stationary PM10 monitors depicted higher levels of particulate matter in rural kitchens versus urban 6 kitchens, as well as level increase during cooking periods.

Household use kerosene or biomass sources such as wood or charcoal as sources of energy. Pennies, Brant, Agbeve, Quaye, Mengesha, Tadele and Wofchuck (2009) investigated the indoor air quality impacts of an improved wood stove in Ghana and ethanol stove in Ethiopia. This study was undertaken to assess the potential of two types of improved cook stoves to reduce indoor air pollution in Ghana and Ethiopia. In both countries, kitchen concentration of PM25 and CO, the two major pollutants responsible for bulk of the ill – health associated with indoor air pollution, were monitored before and after study design.

A screening questionnaire 8 was used by field staff to ensure that the household was suitable for and amenable to participate in the study. Fine particulate matter was measured in each house hold ‘’ before and after ‘’ the new stove, using a university of California – Berkeley (UCB) particle monitor 6 equipment with a photoelectric detector. Carbon monoxide (CO) was measured with a HOBOCO logger (model H11-001 onset computer company, Bourne, MA, USA).

After the test in Ghana, kitchen concentration of PM25 decreased significantly by 52% after introduction of the new stove and also there was a reduction of CO concentration by 60%. Similarly the average concentration CO and PM25 in Ethiopia reduced by 76%. Despite the improvement associated with these two stove, further changes in stove fuel types or household fuel mixing patterns would be required to bring PM and CO to a level not considered harmful to health (Pennies et al., 2009).

Poor indoor air quality is widely recognized as a problem in South Africa. According to statistics South Africa , there are approximately 5 million households in South Africa currently using fossil fuels for domestic purposes. A fairly high proportion of this households use kerosene. Muller, Diab, Binedell and Hounsome (2003) did a study to quantify the health risk of people living in an informal settlement known as Cato Crest within the Durban metropolitan area of South Africa.

The aim was to carry out a health risk assessment of kerosene usage in that settlement. Pollutants emitted during kerosene usage includes, carbon monoxides (CO), carbon dioxide (CO2), sulphur dioxide (SO2), nitrogen dioxide (NO2), particulate matter and various hydrocarbon and volatile organic compounds (VOCs) and as a consequence, there are many potential health effect associated with kerosene usage.

The air quality monitoring took place over a 9-days period from 5 to 15 September 2000. The result of the study shows that there were high levels of pollutants as a result of kerosene use in Cato Cresta and thus has the potential to cause adverse effect through inhalation of combustion products (Muller et al., 2003). 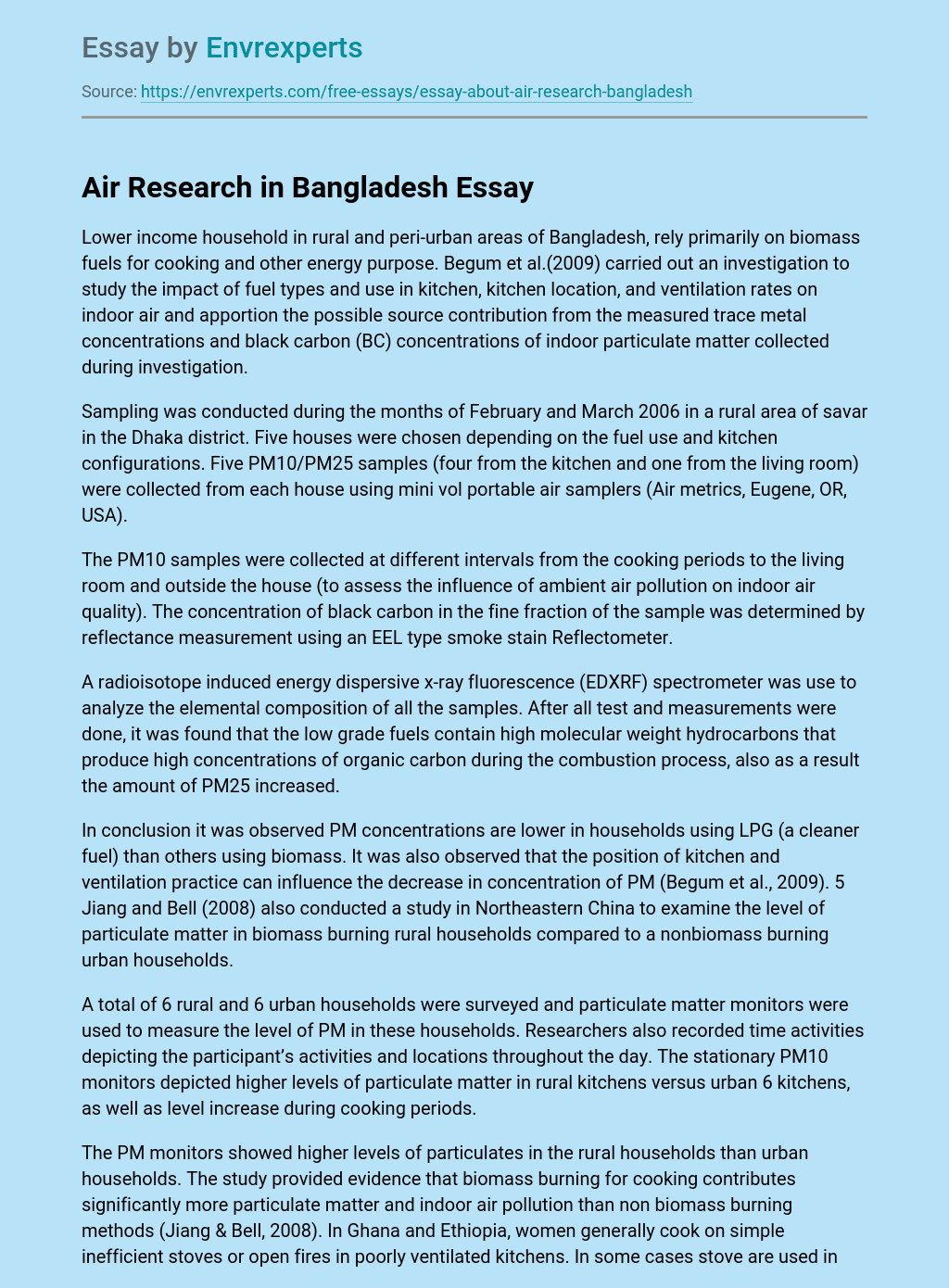