Algae is Not the Future Biofuel

Recent talk and studies by the scientific media on algae biofuels indicates that the future is bright and clear and that the pros outweigh the cons when it comes to replacing the fuel sources we use with algae biofuels. Although many people including president Obama partially support doing so; many people like myself also disagree for numerous reasons and feel as if the media puts too much hope into algae as a biofuel. A perfect example of these inaccuracies would be from an article on triplepundit.

Don’t waste time
Get a verified writer to help you with Algae is Not the Future Biofuel
Hire writer
$35.80 for a 2-page paper

com that I discovered titled "Energy Department Foresees Algae Biofuel in your Future,” by Tina Casey. In this article, she does a good job of pointing out the pros of algae as a biofuel such as how it is not food-based, how it has a high oil content, and how it can be grown on land and in water unlike the other biofuels.

She also speaks on how there has been tremendous support on the plan to make algae the biofuel of the future and how the possibility of this happening is supposedly increasing due to the progression in the engineering, development, and transitioning in the production of algae biofuels.

But many people like myself feel that even with all of this progression there is still room for a whole lot more to make it possible for algae to replace the fuel we use now and that articles like this try to hide from the true fact that it will take way more progression to make algae the biofuel of the future.

In Tina Casey's article, she states, “Algae represents a giant step forward in the field of biofuel, especially compared to food-based alternatives such as corn ethanol.” This is not Jordan 2 so true in the eyes of many researchers like myself because that "giant step forward” has many challenges holding it back. Yes, there are numerous reasons why algae can become the biofuel of the future, but there are even more reasons contrary to that statement. Some of the main problems with the production of algal biofuels are inefficiency and the need for specialized equipment. But on top of those problems are nature. Algae must be grown in natural controlled conditions where most likely animals and other living organisms inhabit. This poses a big risk because animals can interrupt the growth process and their health could be at risk if they feed off of the algae. An article by Mose Buchele titled “The Downside of Using Algae as a Biofuel,” expands on the unlikely-hood of algae being used as a key biofuel in the near future. In Buchele's article, he mentions how according to a report by the National Academies of Science, 3,000 liters of water are required to produce a single liter of algal fuel when using open pond systems in arid environments. This definitely is a huge negative knock if the plan is to produce algae biofuels in numerous pond settings; one of the many challenges when deciding where to grow algae. Tina Casey also notes that “The Obama administration has been supporting algae biofuel research and development through the departments of Energy, Agriculture and Defense, and it looks like those efforts are beginning to pay off.”

This is not necessarily true and the problem is not that the Obama Administration and other contributors have not supported enough, but much more support will be needed to make algae the biofuel of the future. Whether producing algae fuel in ponds or on land, there will be challenges and in order to find the “perfect settings” to grow algae biofuels. Billions of more dollars have to be invested for research, development, and specialized equipment. In a capital research center article by Alison Morris titled “Algae EnergyDead in the Water?" He states, “Though algae research has continued, very little actual progress Jordan 3 has been made toward the goal of algae as a feasible energy source. And yet, since November 2008, the federal government has invested $2 billion for still more algae biofuel research and development.” Many people including myself question that if 2 billion dollars is not enough to make tremendous progress for algae to become the biofuel of the future? How much more billions will it take? And according to an article by "BiofuelsDigest.com," the Obama Administration has only recently touted Tina Casey's article mentions how the Energy Department sees "progression” in the transitioning of algae biofuels from demonstration scale operations to commercial scale operations due to the Obama Administration's support in research and development. An article titled “Algae industry moves  beyond research to commercialization" by Sustainable Business mentions how last year majorcompanies like “Sapphire” and “Algenol” have successfully used algae biofuels to heat buildings and reduce street noise. But the article also states that “The (algae biofuel) industry needs a Manhattan Project to scale commercialization," and that "it's no longer science that's holding it back.” By this they are basically saying that support in research and development alone will not create progression in the transitioning from demonstration scale operations to commercial scale operations; better promoting or something bigger has to be done for there to be large scale commercialization of algae biofuels.

Many media reports and articles such as Tina's give good reasons as to why algae has the potential to be the biofuel of the future, but display flawed logic and significant inaccuracies while doing so. Yes, Tina's article did state how algae biofuels are better than food-based alternatives such as corn ethanol, but she states how algae is a giant step forward, when there are Jordan 4 an uncountable amount of problems in the production of algal oil/biofuels. She also mentions that the support by the Obama Administration is beginning to pay off when the Obama Administration's contribution wasn't big enough to cause noticeable progression. And lastly, Tina states that the Energy Department sees a shift in the use of algae biofuels from demonstration scale operations to commercial scale operations due to the Obama Administration's contribution of 14 million dollars, when the financial support does not have a bigger influence to commercialization as a Manhattan Project or better promoting would. Its articles like these that would have many people believing algae is the future of biofuels until they do the research and discover the flaws and inaccuracies used to convert people into believing in algae biofuels.

Algae is Not the Future Biofuel. (2021, Oct 31). Retrieved from http://envrexperts.com/free-essays/essay-about-algae-not-future-biofuel 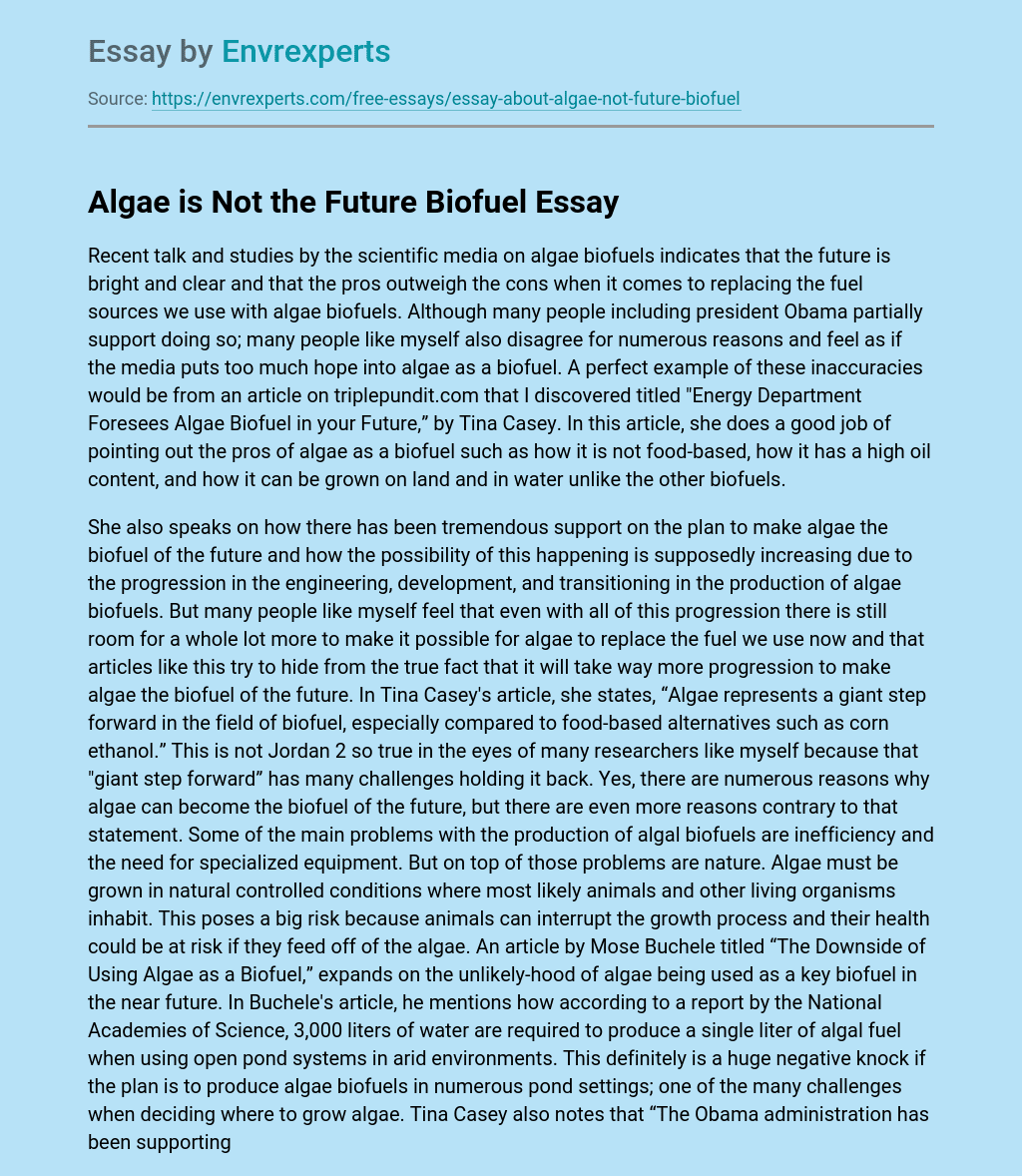