Don’t waste time
Get a verified writer to help you with Alternative Energy: Fossil Fuels
Hire writer
$35.80 for a 2-page paper

Although fossil fuels help provide energy, overusing them can induce harmful outcomes on the environment and human health. Fossil fuels supply a great deal of energy that people need. Fossil fuel usage has increased drastically ever since the beginning of the Industrial Revolution. During that revolution, people cleared out land to make room for housing, factories, roads, and various machinery. Also, the population began to grow exponentially due to technological and medicinal advances.

Because of this, more people began to work and depend on transportation to get them to their destination; therefore, fossil fuels became the main source of energy. Fossil fuels are quite abundant in quantity, and they are cheaper to use than alternative energy sources, such as solar power.

Misusing fossil fuels can lead to adverse environmental issues. Fossil fuels naturally consist of carbon, hydrogen, sulfur, nitrogen, and oxygen. When people burn fossil fuels, all of these elements are being released into the atmosphere, polluting the air as a result.

Air pollution caused by fossil fuels can lead to several environmental effects. First, the ozone layer, located in the stratosphere, exists to protect the Earth from harmful ultraviolet rays formed by the sun; however, this layer can be depleted by chemicals called chlorofluorocarbons. Chlorofluorocarbons consist of chlorine, fluorine, and carbon, and they react with and deplete ozone. As a result, increased carbon emissions from fossil fuels result in faster ozone depletion. Next, fossil fuels can lead to acid rain. Sulfur and nitrogen that is released from fossil fuels react with oxygen and water molecules to acid rain. Acid rain can damage plants and the water supply, and it can kill various organisms, which puts the environment's biodiversity at risk. Acid rain can also damage infrastructure and cars because it can erode metal, paint, and stone. Finally, fossil fuel combustion heavily contributes to global warming. When burned, fossil fuels emit greenhouse gases, such as carbon dioxide, that trap heat in the atmosphere as a result; this leads to the drastic increase of Earth's average temperature, which can cause two things: a rise in sea levels and damaged coral reefs. Today, sea levels are rising because the glaciers in the arctic are melting due to the rise in average temperature. Countries with a low elevation, such as the Maldives, are at risk from rising sea levels because it can flood the land, making it uninhabitable. Rising sea levels can also affect agriculture because it can contaminate the soil due to the rise in salt levels. In regards to coral reefs, the Great Barrier Reef is in the process of dying because of excessive bleaching. It is natural for coral reefs to undergo bleaching in response to a stressor; however, rising temperatures are causing the coral to remain bleached and ultimately die. Coral reefs are the habitats to many aquatic organisms, so if they die off, organisms that depend on these reefs will die off because they do not have a place to live and reproduce.

Similar to the environment, misusing fossil fuels can be detrimental to the well-being of people. For example, ozone depletion can increase the risk for people to develop melanoma, the most dangerous form of skin cancer. Melanoma is caused by ultraviolet rays penetrating the deeper layers of the skin and causing melanocytes to produce abnormal melanin. Ozone depletion can also cause sunburns, which are less severe but still dangerous. Next, the air pollution caused by fossil fuels can increase the causes of people developing cardiovascular and respiratory issues. For example, air pollution can expose the heart and lungs to dangerous pollutants, which ultimately adds unwanted stress to the vital organs. As a result, people are at risk of being diagnosed with bronchitis, chronic obstructive pulmonary disease, and even lung cancer. Also, air pollutants can worsen the symptoms of asthma and allergies, and it can inflame the blood vessels, which can lead to stroke. Pregnant women who are repeatedly exposed to air pollution have a higher chance of giving birth to a baby with birth defects. In addition to air pollution, acid rain can damage the health of others. Acid rain contaminates water with harmful chemicals; therefore, when people drink contaminated water, they are more prone to suffer from dehydration, gastrointestinal issues, and cancer. People depend on plants to live; therefore, if plants are destroyed by acid rain, then they will not be able to use up carbon and provide oxygen through photosynthesis. With the population continuing to expand and plants not providing enough oxygen, the biological oxygen demand of humans increases, making it more difficult for humans to get the required amount of oxygen to live.

In conclusion, fossil fuels account for a large percentage of energy that people use, but abusing them can negatively affect the environment and people's health. Although fossil fuels are beneficial to the industry, the downsides to using them outweigh the pros in the long run. Today, fossil fuels are still being used, but people are switching to alternative energy sources that do not harm the environment. For example, people are investing in electric cars because they do not need gas. Although electricity is not free, electric cars do not pollute the Earth. Also, more people are beginning to invest in solar energy because prices have fallen, and it provides an efficient and safe way to generate energy without harming the environment or the health of others. Overall, people only have one Earth to live on, and overnight changes are not expected from them; however, being aware of the harmful effects of using fossil fuels can help save the Earth from being permanently damaged. 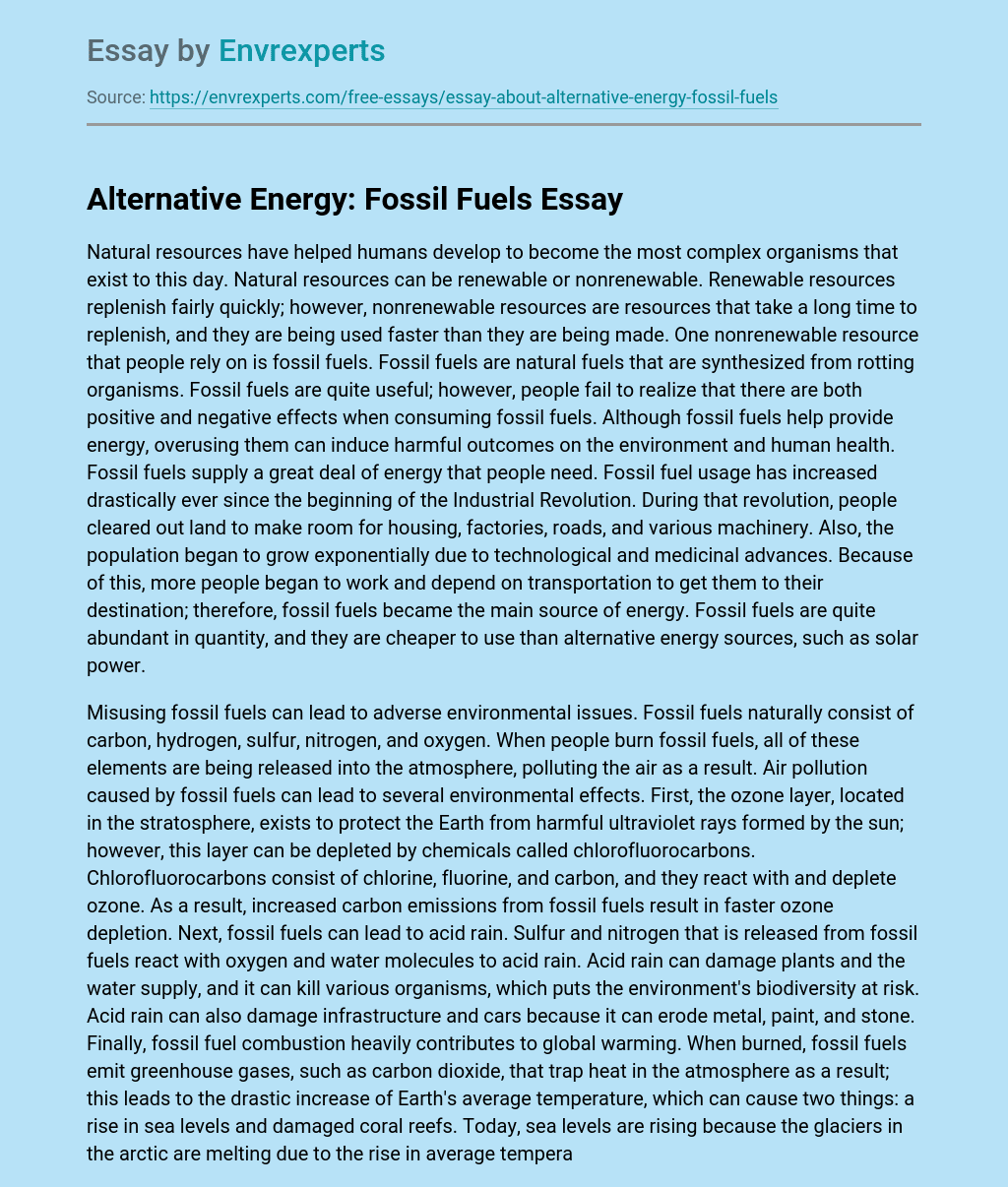