The atomic nucleus is hit by a single Neutron that is flying around the impact causes the atomic nucleus to split into new nuclei each of them takes part of the electrons with it so that two new atoms are formed. In the case of some very large atoms a few neutrons are additionally released when uranium-235 atoms are split in a nuclear power plant this usually involves the release of three neutrons (MIT Nuclear Reactor Laboratory). If these neutrons hit other uranium-235 atoms it can start a chain reaction.

Don’t waste time
Get a verified writer to help you with Alternative Energy: Nuclear Energy
Hire writer
$35.80 for a 2-page paper

Nuclear reactors are the reason that nuclear power plants work. Using controlled vision in fuel rods that are coolant fluid usually by water.

The heat from the core is used to generate steam which will drive a turbine that creates electricity and a generator. According to the World Nuclear Association “The large towers near nuclear reactors are used for cooling down and condensing the water, so that it can be reused in the system.” The fuel rods are made of a metal which contains uranium-235 or plutonium 239 when the fuel rod is low in fissionable atoms it’s considered to be spent (used up).

Spent fuel rods are still radioactive zone, they must be placed under water in holding tanks to cool them down and the water also acts as a shield to reduce radiation levels the rods glow blue because of Cherenkov Radiation the rods can also be stored here for many years and may later be recycled or move to a more permanent storage location.

The first advantage of Nuclear power is the use of exothermic nuclear processes to generate electricity. Nuclear energy is economically stable, it is affected neither by the fluctuating prices of fossil fuels, nor by the variability of some alternative energy sources. It does not have to depend on climate to operate like solar and wind do. This makes Nuclear power plants are capable of producing large amounts of energy, enabling them to meet the needs of industrial centers or major cities. Second advantage is that nuclear is the largest job creator of any electrical power source. The average nuclear plant employs between 400 to 700 people (Stanford Research). In comparison the average natural gas plant employs only 50 or so people, and just a handful at solar facilities. Nuclear facilities have a major economic impact on a lot of communities. In just one year the average nuclear plant spends around 40 million dollars in wages and contributes 470 million dollars to the local economy. According to the Nuclear Energy Institute, “When it comes to state and local taxes, Illinois nuclear facilities contribute about 290 million in state and local taxes.” The economic impact of nuclear plant shutdown does not come to a screeching halt during routine shutdowns such as maintenance and refueling. It benefits the local economy, since nuclear plants employ hundreds of workers during the shutdowns and they support local businesses while they are in town.

Third advantage is that Nuclear energy is way less harmful to the environment and the atmosphere in terms of climate change than fossil fuels, our main source of energy. This is because it does not produce huge amounts of Co2. The Institute of Nuclear Energy estimates that, “if the world were to replace the energy being produced through nuclear power with fossil fuel, it would generate billions of tons more Co2 each year.” During the last century, human activities have released large amounts of carbon dioxide and other gases into the atmosphere. As the population is on its way to 9 billion, energy consumption is going to increase, which is going to cause production of more coal plants since people need electricity. Nuclear plants are the only way of dampening the effects of climate change and preventing man-made global warming. With all these positive things that Nuclear reactors have to offer there are two disadvantages of them which are Nuclear waste, and harmful radiation.

An average nuclear power plant generates 20 metric tons of nuclear waste annually, globally that is more than 2,000 metric tons produced each year (Stanford Research) . This is why nuclear reactors have waste disposal problems. Reactors produce nuclear waste products which release dangerous radiation. Since it kills people who touch them, they cannot be thrown away like ordinary garbage. Currently many nuclear wastes are stored in special cooling pools at the nuclear reactors and have been untouched after that. Accidental release of harmful radiation is one of the biggest causes people not wanting to work in the nuclear plant. Nuclear power relies on a controlled environment of nuclear fission. Now if these safety measures fail, the radiation may come in contact with people . Since it produces radiation, this radiation harms the cells of the human body which can make people sick or even kill them (National Cancer Institute). Nuclear radiation can affect people for years to come, they can die from cancers induced by the radiation. Even though nuclear energy produces a huge amount of energy's its use is debatable with some proposing it for the amount of energy produced, while others are against it. Due to its potential threat to the environment and human life. People still do not know what to do with the dangerous radioactive waste and where to put it so that it does not come in contact with humans.. We cannot replace coal plants with nuclear power plants until we have solved the waste problem. If we did, there would be radioactive waste everywhere people would go. 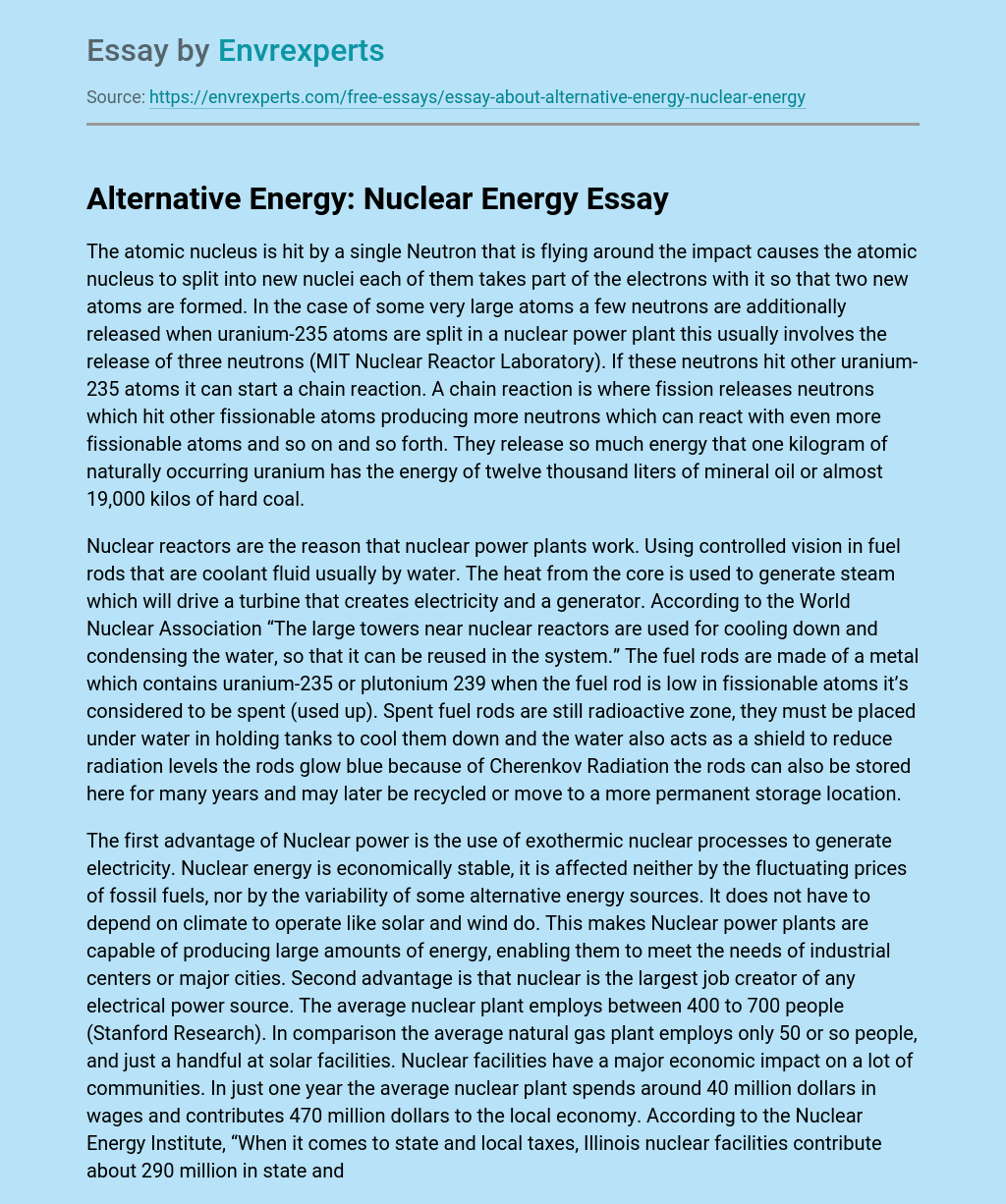