Recently the topic of nuclear power has been circulating the media. It has been painted in both a positive and negative light since it started becoming popular. However, most people view nuclear power as a dangerous source of energy ever since the incident that occurred at Chernobyl killing many. Although nuclear power has many benefits, people are afraid of the consequences of using such an unpredictable form of energy. Because of this, a divide has formed between those for and against nuclear power and contradicting information has flooded the media stream.

Don’t waste time
Get a verified writer to help you with Alternative Energy: Nuclear Power
Hire writer
$35.80 for a 2-page paper

First of all, what is nuclear power? According to MacFarlane in the article “Nuclear Power – A Panacea for Future Energy Needs?” nuclear power is an efficient method of creating electricity using controlled nuclear fission, or, less commonly, nuclear fusion. Most nuclear power plants create energy by submerging uranium molecules in water and then inducing fission in the molecules (MacFarlane).

This process heats the water, which is transformed into pressurized steam that turns a turbine powering a generator, creating energy.

Unlike other alternative energy sources, such as solar, wind, and water, nuclear energy is capable of producing the massive amounts of electricity necessary to meet the energy needs of the United States. Though expensive to establish and potentially dangerous, nuclear power is seen by many as the best tool for achieving sustainable, renewable energy. Although an extremely efficient form of energy, the dangers of nuclear power have become a concern to many. According to Rich in the article “Nuclear Power: An Overview,” the study of nuclear power is a deadly science because the process involves the radioactive element uranium-235 Which can result in a fatal reaction.

Not only can nuclear power create sever physical reactions, but it also can have silent, yet deadly affects. As stated by Sokoloski in the essay “The High and Hidden Costs of Nuclear Power,” the form of energy has the ability to pass through all matter, thereby altering and permanently damaging its chemical structure. Human exposure to even the smallest amount of ionizing radiation can result in radiation sickness or poisoning (Sokoloski 59). Sokoloski claimes “ When radioactive material passes through biological material such as the human body, the natural make-up of skin and organ tissues is significantly altered” (61).

Exposure to radiation can result in a range of unfortunate side effects, from singed skin or to various forms of cancer (Sokoloski 62). These scary affects have deterred many from even considering the use of nuclear power, yet there are two sides to the story. Although there are many viable points against nuclear power, there also is a lot of evidence supporting the power source. According to MacFarlane, nuclear power continues to advance, and the industry has maintained the best safety record of all major power sources. Even including the high cost of the safe disposal of waste, nuclear power plants are a cost effective means of energy production (MacFarlane). As stated by Lester in the article “A Roadmap for U.S. Nuclear Energy Innovation,” Nuclear power helps insulate the US and other countries from the unpredictability of oil and natural gas supply and pricing (49). Additionally, the use of nuclear power could also provide a positive environmental benefit (Lester 51). In particular, developing countries can use nuclear power rather than blanketing the world in smog, acid rain and greenhouse gasses such as carbon dioxide that are prevalent in alternative forms of energy (Lester 52). One topic both sides tend to agree on is that safety is the number one priority when it come to energy production.

Nuclear power has become infamous for the Chernobyl incident and others similar. Due to these mishaps, nuclear power are under assault for being extremely unsafe and threat to those affiliated. However, Chernobyl, while very high profile, was the only significant accident to befall nuclear power plants in fifty years causing the only direct fatalities (MacFarlane). According to data collected by the Paul-Scherrer Institute, nuclear power is ten times safer than natural gas-fired generation, the next safest alternative (Lester). It is 43 times safer than coal and 52 times safer than oil (Lester). These figures take into account mining accidents and oil and gas fires and explosions. In addition, both sides acknowledge that the emission of carbon from traditional power sources is causing an irreversible damage to both our environment and atmosphere. A way to avoid these toxic emissions would be to incorporate more nuclear power plants. However, it is doubtful enough people will get on board for this to become a probably solution. In the end, all of this contradicting information has contributed a widening divide between those for and against nuclear power. There is no doubt that nuclear power is by far the most efficient and sustainable form of energy and will offer the most long lasting affects. Yet we cannot deny that nuclear power is accompanied with many safety concerns that need to be addressed when using this form of energy. The question is, do the pros outweigh the cons? 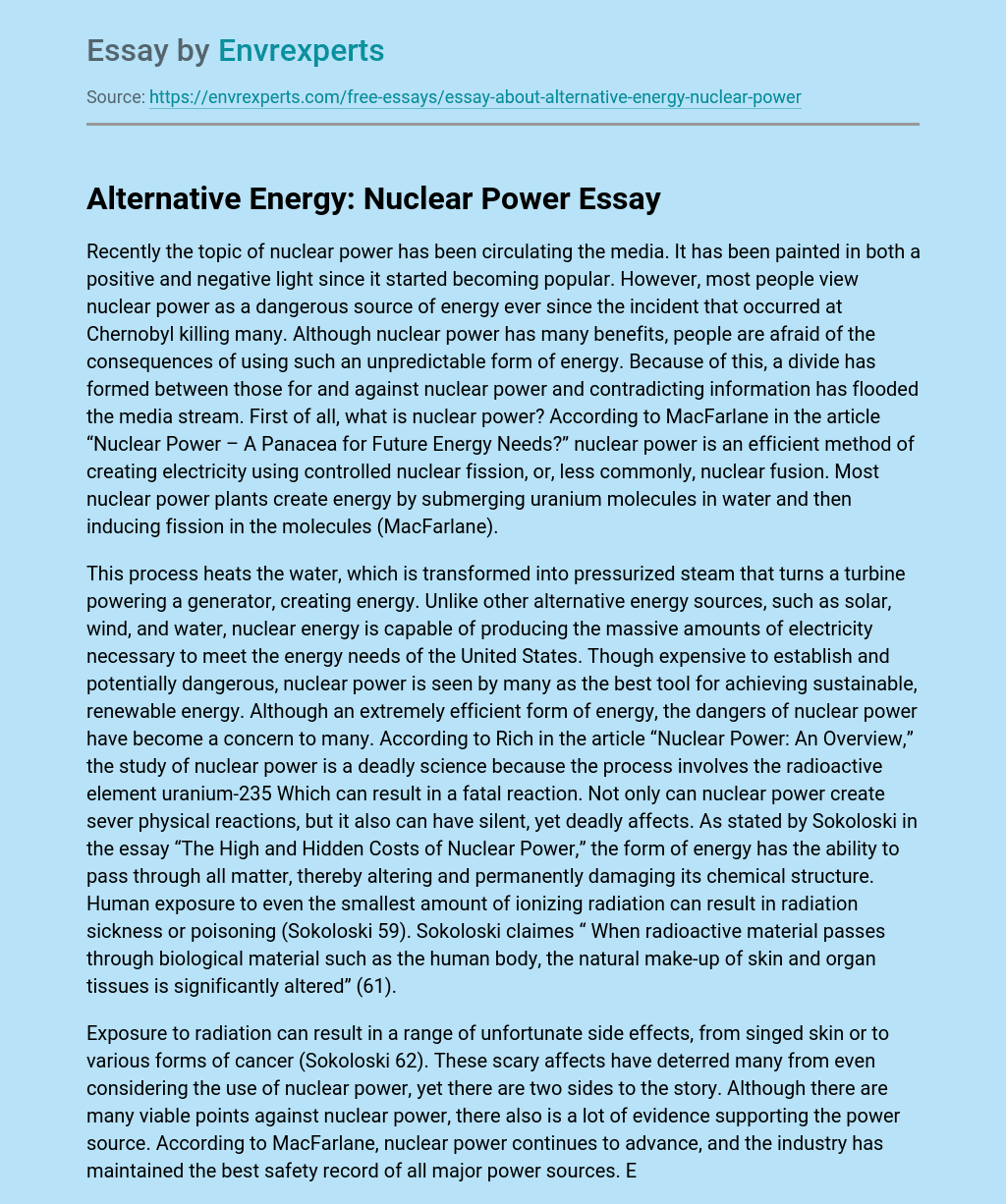