Petroleum products have been burned for power for over one hundred years. It has opened new ideas for many companies who have used it. Gasoline and Diesel fuels made traveling long distances in a short time possible. After polluting the air with this fuel for so long, this source could eventually run out and leave many machines useless. New types of fuel have been found that can potentially replace the work of the harsh ones being used. Alternative fuels are a positive source of energy because they are good for the economy, better for the environment, and easy to access.

Don’t waste time
Get a verified writer to help you with Alternative Fuels
Hire writer
$35.80 for a 2-page paper

Alternative fuels help the environment by producing less pollution than fossil fuels. A few common types of fuel used as alternatives are ethanol, electricity, propane, hydrogen, biodiesel, natural gas, and methanol. An article from ENP Newswire supports the production of biofuels for aircrafts and states, “Compared to traditional jet fuel, biofuel can reduce life cycle greenhouse gas emissions by up to 80%.

” (Newswire). Biofuel is made directly from plant and animal sources that are all renewable. If most airlines used this alternative, there would be a noticeable difference on the pollution in the skies. Electricity is another solution to powering vehicles and other devices without contaminating the air. Electric power can be sourced from the wind, water, and sun by use of wind farms, dams, and solar panels. These methods are completely clean ways to harvest earth’s energy. Although these processes are not entirely popular yet, they are just the start to replacing and conserving oil.

Different ways to power automobiles and other mechanic devices may prevent overuse of petroleum. Conserving this material for roads, greases, and other non-burning purposes, could increase the longevity of this material. It is very difficult to completely shut down all use of oil, but adding alternatively fueled vehicles could prevent the use of gasoline and diesel. In a magazine article, Richard Rosentreter talks about countries having to depend on the use of oil. He stresses the overuse of the limited supply by writing, “perhaps even wars will be fought to control the remaining supply.” (Rosentreter). Conserving oil through the use of alternative fuels could even prevent wars.

The economy also has a benefits that come towards the people that pursue it. Alternative fuel helps the economy because the sources are even cheaper for consumers. A few companies have made vehicles that run on natural gas or electricity. Both alternatives cost less than gasoline and diesel. Although gasoline and diesel prices have been rising and the oil companies have been making more money, the regular citizens are paying more and losing money. Most cars run on gasoline and car owners have no choice but to pay extra for the same amount of fuel. A few companies have started to make electric cars for daily drivers. The cars are beginning to be more affordable and cheaper to recharge. In an article from The Washington Post, Brian Fung writes about the costs to recharge a Tesla car in the future. He declares that “by the early 2020s, Teslas could be widespread enough that fully charging one might cost as little as $16 at a supercharger.” (Fung). The companies making similar cars and providing similar services will gain more customers and make more money when electricity proves to be reliable. When the businesses make more money, they will be able to employ more people to support the needs of larger populations.

Another economic advantage to alternative fuel is the creation of more jobs. The jobs in the petroleum industry will not last forever. This is because oil is a finite source and it is consumed faster than it regenerates. On the other hand, electricity from wind, water, and sunlight, is renewable. The jobs that support renewable electricity may continue to grow. The Opposing Viewpoints Online Collection informs, “The Environmental Defense Fund estimated that there were 769,000 jobs in renewable energy in 2015, with a job creation rate significantly higher than that of the rest of the economy.” (OVOC). The jobs in the renewable energy industry are growing. The larger workforce can accomplish more studies and install more devices to harvest the clean energy from the earth.

The energy from alternative fuel is easy to access because it is plentiful. An example of plentiful energy is solar power. This energy can be acquired through existing technology to make electricity. Another fuel that is easily accessible is ethanol. It is made entirely of plant products that are renewable and commonly farmed. The Gale Encyclopedia of Science claims, “The United States had more than 100 ethanol producing plants in operation by 2006 (producing almost 5 billion gallons per year).” (GES). The chances of ethanol running out are slim due to its renewability. There is an endless supply of this source and it does not need to be mined in order to use it.

Most alternative fuels are at the surface of the earth. This makes them ready to harvest or generate. This is more convenient than crude oil, because crude oil requires drilling and pumping from under the surface. A writer, Denis Hayes, explains, “the area needed to produce 1,000 megawatts of solar electricity is less than the amount that would have to be strip-mined to provide fuel for a similar sized coal plant” (Hayes). Installing solar farms would require less space, and last longer than coal that is finite. The sun’s energy would require less effort than coal or oil to take in.

Alternative fuels benefit the environment, economy, and are easy to acquire. The environment is benefitted through the decrease in pollution and the conservation of oil. The economy is upgraded through the affordability and increase in jobs. The energy from alternative fuel is conveniently accessible because it is plentiful and immediately harvestable. The technology is already invented to access these fuels. The world could potentially replace fossil fuels someday. 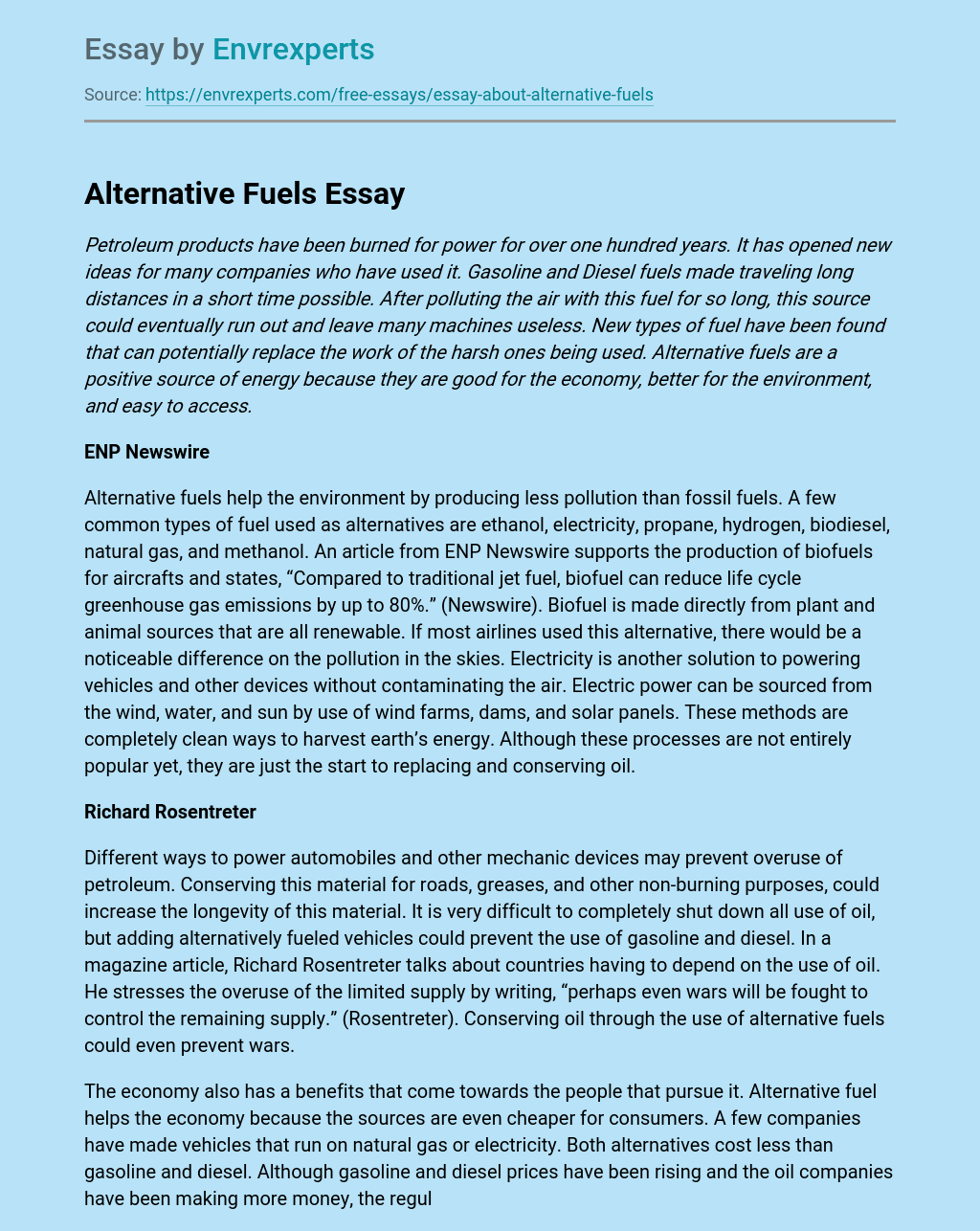