The demand for electricity is constantly increasing. Most fossil fuels are burned to generate steam, which is then utilized to create electricity. Nearly 87 percent of the energy used is produced burning coal. Meanwhile, our electricity that is being produced could be generated through various renewable energy resources, which are supplies of energy that can be replaced naturally by nature, so that they can be used again. Coal and oil take millions of years to become a usable source of energy, While very little of the American electricity comes from these renewable sources, there are many opportunities to take advantage of them.

Don’t waste time
Get a verified writer to help you with Alternative Sources of Energy Used by Homeowners
Hire writer
$35.80 for a 2-page paper

Each of these alternative power supplies are being used by homeowners who want to reduce their electric bills.Examples of renewable energies as compared to fossil fuel resources include:Hydroelectric – generated by water flow; Solar-generated by the sun;Wind – generated by the strength of wind; Geothermal – generated by heat from the Earth;Biomass -generated from agricultural materials. Water is one of the most plentiful resources on the planet.

There are many uses for water, and one of them, and quite possibly the most well known of in terms of renewable resources, is the generation of electricity. Hydroelectric dams produce power by using the force of the flowing water to spin a turbine attached to a large generator. The water on one side of a hydroelectric plant is held by a dam creating a reservoir, and opening near the bottom of the dam. allows water to flow into a tunnel. The water then passes through a turbine.

The turbine turns a shaft attached to a generator creating the electricity.Hydroelectric power is the most commonly used renewable energy source in America. The most famous example of a hydroelectric plant is Hoover Dam, and the amount of electricity generated is used to power all of Las Vegas, and all of itsâ€TM lights. The flow of the river does all the work in hydroelectric plants, and they do not create greenhouse gasses like most power plants. However, there are some environmental impacts associated with hydroelectric plants. For instance, when a new dam is built, there is typically some flooding of the river. Even with the flooding, hydroelectric power is still the largest alternative energy source in the United States. All over the world, solar power is used to heat water for bathing and to cook food. Most people have most likely seen calculators or other small devices that use solar cells. Instead of batteries, there is a thin black strip on the top of the calculator. If that strip is exposed in the light, the calculator will turn on, but if the strip is covered up or there is not enough light, the calculator will not work. Just like in those calculators, there are homes that are powered by solar cells, but those solar cells are much larger and are much more expensive.

These solar cells are used to provide electricity to both homes and other electrical equipment. Enough energy from the sun makes it to the ground surface of the United States alone, it could power our entire country for just over a year. Also, in areas where the sun shines longer during the day and is directly overhead, the energy from the sun is greater than in areas where the days are short and the sun is not directly overhead, thus a greater possibility of producing more power. Scientific researchers have been working on maximizing energy use from the sun by using both solar collectors, and solar troughs. These two mechanisms work by focusing the sunlight onto a small area, increasing the amount of energy delivered to that area. Solar collectors are similar to a car on a sunny day, by absorbing energy from the sun and converting it to heat by using insulation. Solar troughs go one step further. They use mirrors to focus the energy of the sun on a particular point (Somewhat like using a magnifying glass to start a small fire). Much higher temperatures can be achieved by using solar troughs. Next is wind power. The wind has the power to do many things. It can be used to cool homes on a warm day, and even provide electricity to homes using the right equipment. For centuries, windmills have been used to capture wind power to perform many tasks such as grinding grain, sawing wood, and pumping water. These are all examples of using the wind for its direct use to do work. The Dutch people are prime examples for instance. Another way to use the wind is to convert it to mechanical energy through the use of turbines, much like in those in hydroelectric plants. Wind turbines are special types of windmills that convert wind power into electricity.As wind passes over the blades of the turbine, they spin, looking much like the propeller of an airplane. The blades are attached to a long metal rod, this energy is transferred to another shaft with a gear on it, that is used to turn the motor of a generator. As magnets in the generator spin, they create electricity that is carried out to either a home, through electric wires to various sections of the electric grid. Other parts of the wind turbine help improve the efficiency of the wind turbine. The brake stops the blades if they begin to turn too fast for the windmill to safely operate. In most instances, the bigger the wind turbine, the more power it is capable of producing. Larger wind turbines can turn larger motors, which create more electricity. However, there is one problem with wind power. Although it is clean and comparatively cheap in the long run, the wind is not always available. If the wind is not blowing, then the blades of the wind turbine do not turn, and if theyâ€TMre not turning, electricity is not being produced. The majority of land in the United States has the adequate wind power to produce electricity throughout the year, but there are certain times when bigger cities would not have enough wind to produce all of the electricity needed for their people. Most wind turbines need the blowing wind to be moving at the very least, above five miles per hour before they can begin to produce any viable electricity. As the wind turbine technology improves, lower wind speeds will be able to produce more power, and generators will become more efficient.

Currently, close to 80 percent of the energy taken in by a wind generator is turned into electricity, and although this is more efficient than other forms of electricity production, most areas of the world do not have the constant wind power needed to be the only means of producing electricity. Wood is a form of biomass energy, which is an organic energy source available on a renewable basis for conversion to energy. Until about 150 years ago, most people needed to burn wood to warm up their homes and to cook with. Ethanol is also a biomass fuel produced from corn, wheat, sugarcane and some wasted wood products. Biofuels are also produced from, in certain cases, old vegetable oils, like those used to cook French fries at fast-food restaurants. Commonly, the grain or corn is crushed up and added to water with yeast in it. This mixture is then heated and the liquid left over is ethyl alcohol, otherwise known as grain alcohol or ethanol. The product is relatively clear, has a very faint smell and burns cleanly. For the most part, the ethanol is combined with gasoline and used to power some newer automobiles. When used as a fuel additive for cars, ethanol is mixed with unleaded gasoline to create a 10/90 ethanol-gasoline mixture. The addition of the ethanol increases the gasoline octane which improves combustion in the engine. The reason for this is that ethanol contains oxygen particles that support combustion and results in a cleaner burning gasoline. This helps lower the emission levels of cars that burn ethanol blended fuels. Ethanol capable vehicles are also being used in higher concentrations in some bigger fleets of vehicles, such as cars being used by some state governments. Many of these ethanol equipped vehicles run on a blend of 85/15 ethanol-gasoline mixtures. In certain conditions where the mixed ethanol-gasoline is not available, these engines can also run on regular unleaded gasoline.

Availability is the major issue with ethanol mixture gasolines. The majority of gas stations do not have an ethanol pump, and since there are so few cars using it right now, many gas station owners are not willing to install them. Since the accessibility of the fuel is low, most automakers only produce these vehicles in limited quantities for those specialized fleets that have the access to those pumps. However, Brazil uses ethanol produced from sugarcane. Brazilians use nearly 4 billion gallons of ethanol a year in their cars. Also, in France, ethanol is made from the grapes that are not of the quality, good enough to use in making wine. As stated earlier, ethanol is a source of fuel that is both clean and powerful, not to mention, readily available in many parts of the world. However, many of the things used today in America are not designed to use pure ethanol, so while it can help stretch the gasoline used today, it will not be able to swap places with gasoline as a fuel source in the near future. The alternative energy sources described above generate the same quality of electricity that power plants using coal or natural gas produce. Anyone at home would not be able to tell the difference between the electricity generated by hydroelectric plants, or plants that burn coal or gas. 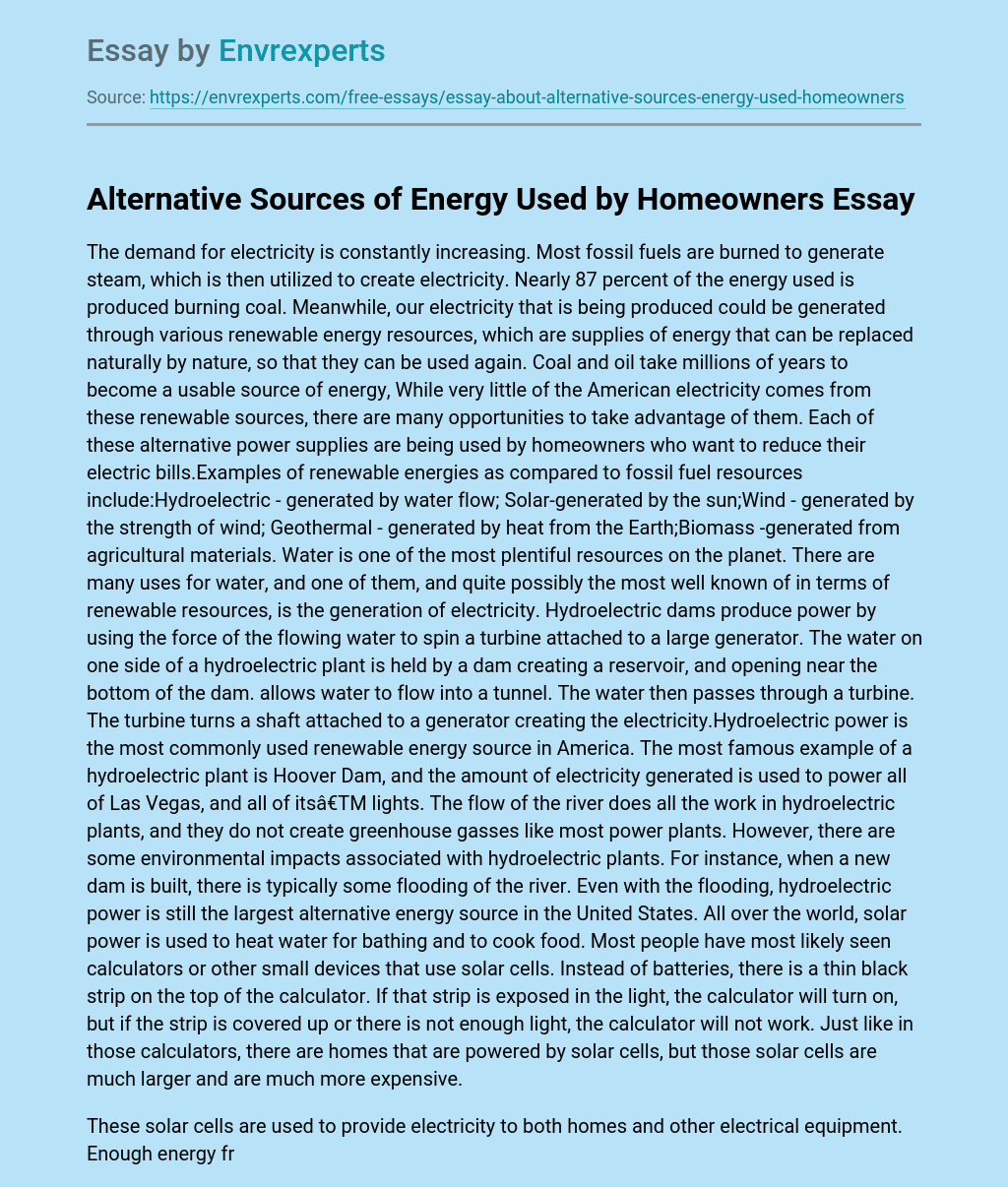