An Analysis on Air Pollution Its Causes,Effects and Solutions

Air is the ocean we breathe. Air supplies us with oxygen which is essential for our bodies to live. However, human activities can release substances into the air, some of which can cause problems such as smog, acid rain, the green-house effect, and "holes" in the ozone layer. Each of these problems has serious implications for our health and well-being as well as for the whole environment. Therefore, preventing air pollution is not only the duty of an individual but also the responsibilities of all people who are living in this earth.

Don’t waste time
Get a verified writer to help you with An Analysis on Air Pollution Its Causes,Effects and Solutions
Hire writer
$35.80 for a 2-page paper

First of all, we need to take a closer look at the various types of air pollution and the effects that they have on people so that we can find out some solutions for air pollution.

When people think about air pollution, they usually think about smog, acid rain, CFC's, and other forms of outdoor air pollution. But do you know that air pollution can also exist inside homes and other buildings? It can, and every year, the health of many people is affected by chemical substances present in the air within buildings.

In the United States, we spend about 80-90% of our time inside buildings, and so our exposure to harmful indoor pollutants can be serious. Therefore, it is important to consider both indoor and outdoor air pollution.
Smog is one type of large-scale outdoor pollution. It is caused by chemical reactions between pollutants derived from different sources, primarily automobile exhaust and industrial emissions.

Cities are often centers of these types of activities, and many cities are now suffered from the effects of smog, especially during the warm months of the year.

Another consequence of outdoor air pollution is acid rain. When a pollutant, such as sulfuric acid combines with droplets of water in the air, the water (or snow) can become acidified. The effects of acid rain on the environment can be very serious. It damages plants by destroying their leaves, it poisons the soil, and it changes the chemistry of lakes and streams. Damage due to acid rain kills trees and harms animals, fish, and other wildlife.

The Greenhouse Effect, which is also referred to as global warming, is generally believed to come from the build up of carbon dioxide gas in the atmosphere. Carbon dioxide is produced when fuels are burned. Plants convert carbon dioxide back to oxygen, but the release of carbon dioxide from human activities is higher than the world's plants can process. The situation is made worse since many of the earth's forests are being removed, and plant life is being damaged by acid rain. Thus, the amount of carbon dioxide in the air is continuing to increase. This buildup act makes a blanket that traps heat close to the surface of our earth. Changes of even a few degrees will affect us all through changes in the climate and even the possibility that the polar ice caps may melt. (One of the consequences of polar ice cap melting would be a rise in global sea level, resulting in widespread coastal flooding).

Ozone depletion is another result of pollution. Chemicals released by our activities can affect the stratosphere, one of the atmospheric layers surrounding earth. The ozone layer in the stratosphere protects the earth from harmful ultraviolet radiation from the sun. Release of chlorofluorocarbons (CFC's) from aerosol cans, cooling systems, and refrigerator equipment removes some of the ozone It causes "holes" to open up in this layer, and allows the radiation to reach the earth. Ultraviolet radiation is known to cause skin cancer and has damaging effects on plants and wildlife.

And last but not least, indoor air pollution also has great effects on people's health. Many people spend large portion of time indoors – as much as 80-90% of their lives. We work, study, eat, drink and sleep in enclosed environments where air circulation may be restricted. For these reasons, some experts feel that more people suffer from the effects of indoor air pollution than outdoor pollution.

There are many sources of indoor air pollution such as tobacco smoke, cooking and heating appliances, vapors from building materials, paints, furniture, and so on. They cause pollution inside buildings. For example, radon is a natural radioactive gas released from the earth, and it can be found concentrated in basements in some parts of the United States. Thus, pollution exposure at home and work is often greater than outdoors. The California Air Resources Board estimates that indoor air pollutant levels are 25-62% greater than outside levels and can pose serious health problems.

So far, we have already had some sketches about various types of air pollution. And now, it is also important to know how air pollution can hurt our health.
Air pollution can affect our health in many ways with both short-term and long-term effects. Different groups of individuals are affected by air pollution in different ways. Some individuals are much more sensitive to pollutants than are others. Young children and elderly people often suffer more from the effects of air pollution. People with health problems such as asthma, heart and lung disease may also suffer more when the air is polluted. The extent to which an individual is harmed by air pollution usually depends on the total exposure to the damaging chemicals, that means the duration of exposure and the concentration of the chemicals must be taken into account.

Examples of short-term effects include irritation to the eyes, nose and throat, and upper respiratory infections such as bronchitis and pneumonia. Other symptoms can include headaches, nausea, and allergic reactions. Short-term air pollution can aggravate the medical conditions of individuals with asthma and emphysema. In the great "Smog Disaster" in London in 1952, four thousand people died in a few days due to the high concentrations of pollution.
Long-term health effects can include chronic respiratory disease, lung cancer, heart disease, and even damage to the brain, nerves, liver, or kidneys. Continual exposure to air pollution affects the lungs of growing children and may aggravate or complicate medical conditions in the elderly. It is estimated that half a million people die prematurely every year in the United States as a result of smoking cigarettes.

Today, research into the health effects of air pollution is ongoing. Medical conditions arising from air pollution can be very expensive. Healthcare costs, lost productivity in the workplace, and human welfare impacts cost billions of dollars each year.

Now, we have known that air pollution could causes extreme effects on human beings and the whole environment. Therefore, it is very important to know what is being done.

An Analysis on Air Pollution Its Causes,Effects and Solutions. (2021, Oct 31). Retrieved from http://envrexperts.com/free-essays/essay-about-analysis-air-pollution-its-causeseffects-and-solutions 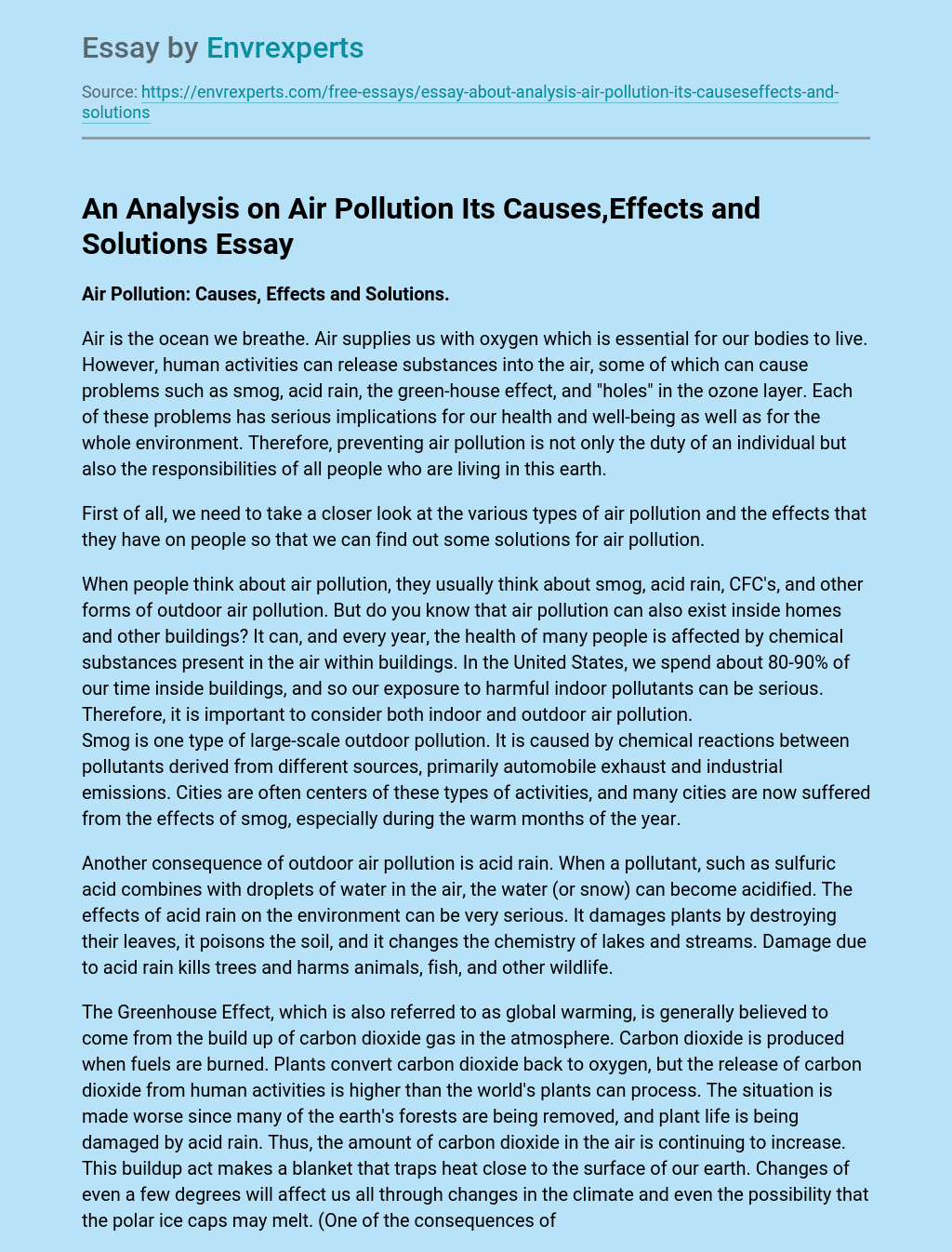