Currently infants face the risk of exposure to potentially toxic environmental hazards. Air pollution among others is the most common environmental hazard that infants can be exposed to. These hazards have found their ways into our homes and children's play grounds. Notably, health hazards pose a big risk to the health of the infants as they can contact different diseases such as cancer, chronic diseases, and acute respiratory diseases. Furthermore, they can cause learning disabilities among children at a further stage.

Don’t waste time
Get a verified writer to help you with An Analysis of the Air Pollution in the United States of America
Hire writer
$35.80 for a 2-page paper

Environmental pollution can majorly be blamed on technology, thus development of industries that use toxic chemicals in their manufacturing processes. It is worth noting that many chemicals have been discovered in the last 50 years. These chemicals are legalized for factories' use without considering the health risks the young ones are being exposed to. In this essay, we will be tackling how air pollution is dangerous to the health of infants and the prevention modes.

Air pollution is the release of toxic or unwanted substances into the air.

The toxic substances may cause discomfort, health risk, death to human beings, and other living organisms. Air pollution mostly affects infants and children at large, due to their narrow airways and the fact that they experience frequent rapid rates of respiration. This normally happens both indoors and outdoors from different sources. Pope, Snyder & Mood asserts that the best example of indoor pollution emanates from the smoke of cigarettes, while outdoor pollution mostly comes from ozone. However, both the indoor and outdoor pollutants have serious effects on infants.

These effects include chronic diseases, asthma, and lung failure.

The Risk of Air Pollution the Safety and Health of Infants

Air pollution is an environmental hazard that can seriously harm infants. The chemicals released by the factories can cause both health risks and increased mortalities. Infants living in urban areas face higher risks of being infected by air pollutants. According to Creel, the risk of air pollution on children is high because of various factors such as children face more often-rapid respiration rates, they have narrow airways and the fact that children inhale more pollutants per pound of the body weight. Serious health effects are associated with inhalation of these pollutants. Infants face risks of contacting diseases and disabilities such as asthma, acute respiratory illness, ear infections and decreased lung functions. Pope, Snyder, & Mood assert that most of these infections are serious, and the blame is on the increased infant mortality rates. However, measures are being put in place to control the outdoor pollutants that are the ozone. Considering that, obliviously our infants are not safe in our polluted environment, thus serious measures should be put in place.

Recommendations for preventions of pollution on infants

The infants' health and safety are the most important things in our society, thus, good care is a necessity for them. Below mentioned are some of the recommended ways to prevent the infants from environmental hazards such as air pollution.

Firstly, you should not smoke or let other people smoke near an infant. The cigarette smoke is among one of the indoor pollutants. However, this is preventable by avoiding smoking indoors so that there is no exposure of smoke to the young ones.

Secondly, the parents or any other person taking care of the infant should pay attention to the environmental reports and limit children from exposure to the outdoor air. This is applicable mostly on the ozone alert days and the other days that the air is polluted.

Thirdly, the use of pesticides and other chemicals at home has to be avoided. An alternative solution can be used if possible instead of risking the infant's health. Furthermore, you can work with the other community members and recreation centers and discuss how to avoid using pesticides and other chemicals.
Lastly, the residents of a specific place can come together and address their problem to government officials representing them. Creel reiterates that the government has to pass laws that protect and care for the health of infants.

Although the fight against air pollution is still on, there have been interventions for a long period to do away or control the chemicals. Evidently, in the US, the then president Nixon adopted the clean air act. Additionally, in November 1996, Environmental Protection Agency (EPA) of the US released a statement Environmental Health Threats on infants and declared that for the first time children would be considered in every EPA hazard measurement and standard-setting actions.

In conclusion, a clean and safe environment is important for all of us and especially our children. Infants are delicate and thus, they need to be cared for and protected from any environmental hazard. In order to breath, we need air, air is ideal for the functioning of the human body. The infant's life is threatened when we have a polluted air. In our today world, we have thousands of toxic chemicals that affect infants. Normally, there are two types of air pollution, indoor and outdoor pollution.

Indoor pollution mainly comes from substances like cigarette smoke and the pesticides while the outdoor pollution is from the ozone. Despite that, there are recommended ways to be used in order to protect the infants from being exposed to these chemicals. Among them are, avoiding smoking and use of pesticides indoors, addressing your issues to the government officials so that the children can be protected and choose to use fewer chemicals in your home.

An Analysis of the Air Pollution in the United States of America. (2021, Oct 31). Retrieved from http://envrexperts.com/free-essays/essay-about-analysis-air-pollution-united-states-america 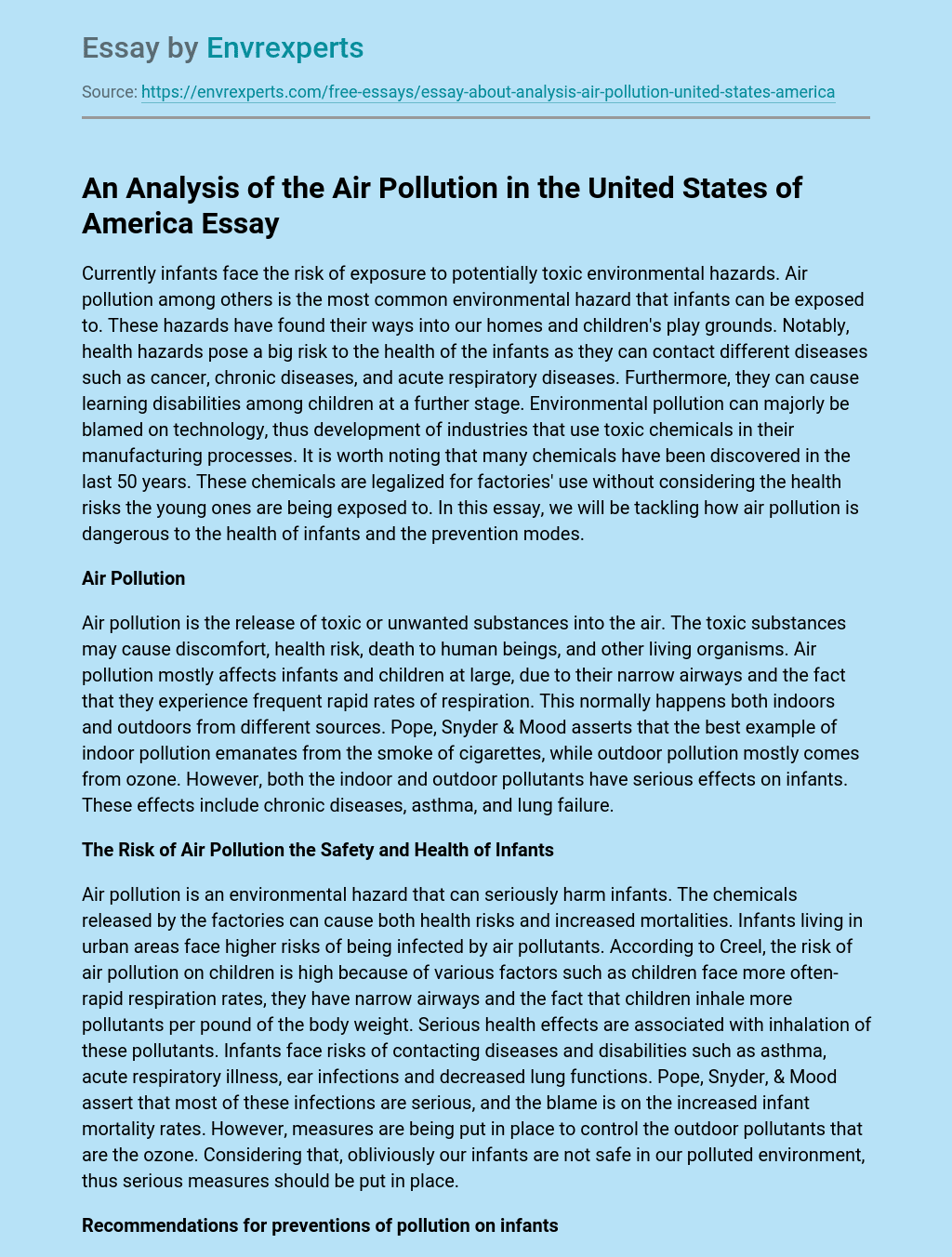