Causes and Effects of Air Pollution. Earth is everybody home and nobody likes to live in a dirty home. Of all the changes swirling among us, those that affect the natural environment seems to hold the most serious implication for human life. From a long period of time, people have been polluting the earth surface, but because of earth own ability to absorb and purify minor quantities of pollutants, the problem has been minimal. It is significant to note that air pollution could be found in some residential and commercial buildings.

Don’t waste time
Get a verified writer to help you with An Analysis of the Causes and Effects of Air Pollution in the Natural Environment
Hire writer
$35.80 for a 2-page paper

It causes poor ventilation and specific sources such as copy machines, electrical and telephone cables, carpets etc. It has been found that air in some office buildings is hundred times more polluted that the air outside. In many occupations however people become aware of the risk only years after they worked at jobs that they thought were safe.

For e.g. several million people worked with asbestos during and after world war two.

The Federal Government estimates that one quarter of them will die of cancer from having breathed asbestos particles as it had been a main air pollutant. Industrialization increased the world standard of living and brought better health to hundreds of million of people. Ironically, industrialization threatens to disable the basic environment of human race, posing what may be the greatest health hazard of all time. Underlying today environment decay is the globalization of capitalism which continues to push for economic growth. Earth cannot withstand such an onslaught.

Global economic production creates global pollution, and faster paced production means faster paced destruction of our environment. In short the message implies as to  Growth at any cost 1. Industrial growth did come, but at a high cost to the natural environment.

Burning fossil fuels to run factories, motorized vehicles and power plant have been especially harmful. Motor vehicles produce high levels of Carbon monoxide (CO) and major source of hydrocarbons (HC) and nitrogen oxide (NO). Whereas fuel combustion in stationary sources such as residential, commercial and industrial heating and cooling and coal power plants, the dominant sources is Sulfur Dioxide. Carbon dioxide is one of the major pollutants in the atmosphere. Major sources of Carbon Dioxide are fossil fuels burning and deforestation. Carbon Dioxide emissions are increasing by 4% a year. Also it is a good transmitter of sun light, but partially restricts the release of heat from the earth in to space. It is as though the gases have smudged the windows of our earth green house. Hence, our plant can no longer breath the way it should. This produces the so called Green House Effect. That prevents a drastic cooling of the earth during the night.

Currently Carbon Dioxide is responsible for 50% of the global warming trend. The build up of heat is causing global warming, glaciers are melting and the seas are rising, threatening to flood the world shorelines. The climate boundaries may move north several hundred miles and many animals and plant species are likely to become extinct. Fish can no longer survive in some lake in Canada and north eastern U.S. because of Acid rains. The burning of fossil fuels releases Sulfur Dioxide and Nitrogen Oxide which reacts with moisture in the air to become Sulfuric Nitric acids. We can help to reduce air pollution by improving energy efficiencies so the less fossil fuel is burnt. As human beings it is our utmost duty to reduce pollution and make the earth a cleaner, healthier and more pleasant place to live.

An Analysis of the Causes and Effects of Air Pollution in the Natural Environment. (2021, Oct 31). Retrieved from http://envrexperts.com/free-essays/essay-about-analysis-causes-and-effects-air-pollution-natural-environment 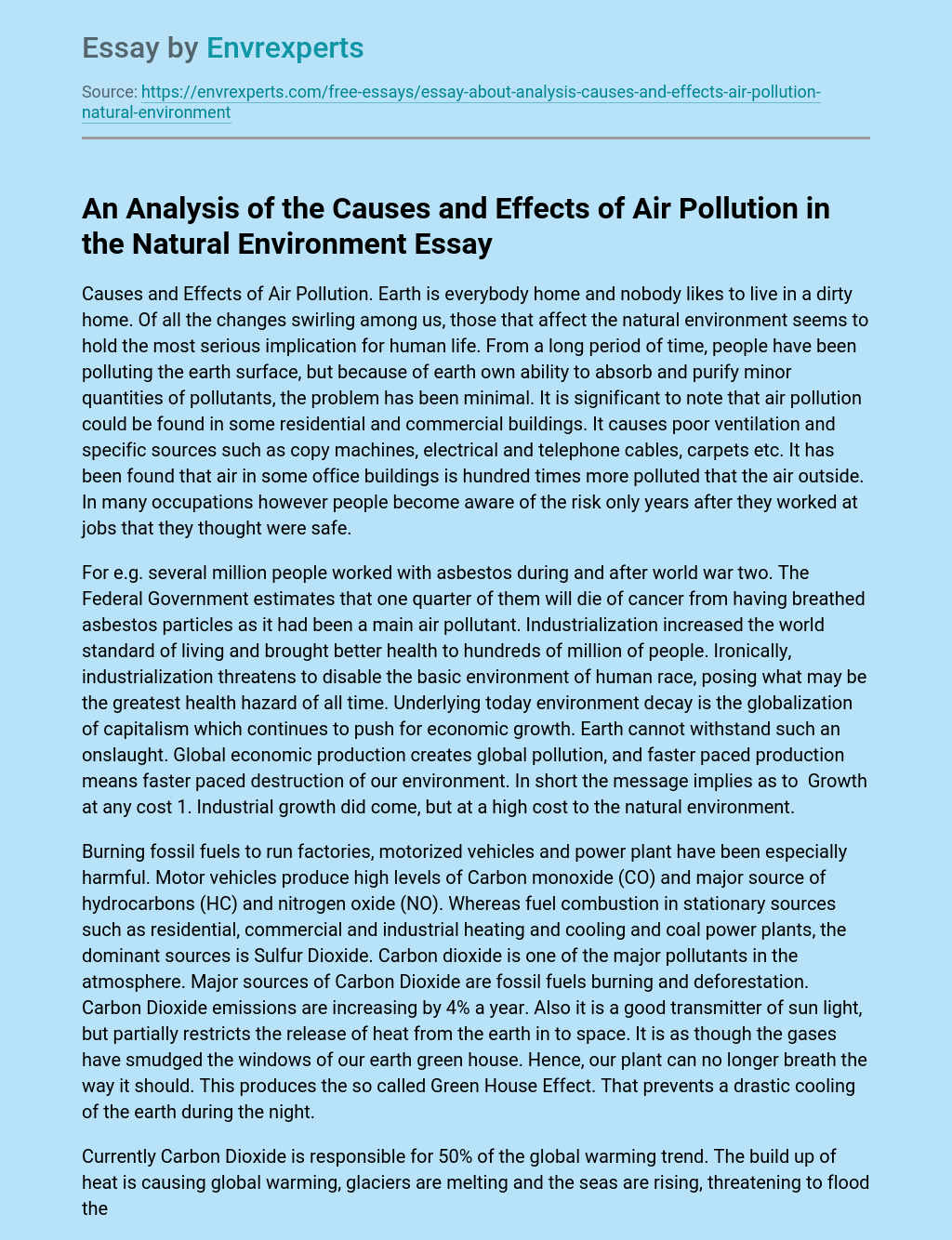