The Death of the Ozone by the Greenhouse effect: Myths

In this article the heavily controversial proposed link between ozone depletion and the greenhouse effect will be discussed. There is no individual link between Ozone depletion and the Greenhouse Gas Effect; however there is the exception of Chlorofluorocarbons, a greenhouse gas that depletes the Ozone. The ozone acts as a shield covering the Earth in the stratosphere like an invisible globe, allowing some of the suns UV rays to be absorbed.

Don’t waste time
Get a verified writer to help you with An Analysis of the Death of the Ozone By the Greenhouse Effect
Hire writer
$35.80 for a 2-page paper

The depletion of the ozone carries many affects to us as inhabitants of the Earth and other animals, species, fauna and life on Earth as we know it. This is due to the change of radioactive forcing to the Earth's surface dramatically altering the amount of UV rays the Earth absorbs (which without the ozone would be deadly to life on Earth).

Ozone (03) is triatomic, elemental oxygen that forms a protective layer in the Earth's stratosphere. Ozone is a very reactive gas composed of three atoms of oxygen.

As previously mentioned, recently there has been depletion in the levels of ozone caused by chemicals known as CFC's.

CFC stands for Chlorofluorocarbons, a chemical that is mainly made up of Chlorine, Oxygen, Fluorine and Carbon. Chlorofluorocarbons (CFC's) were first introduced in the 1930's and rapidly became a $28 billion a year industry through the stability and non-toxicity of the gas and the varied amount of uses it contained. The gas was found to be cheap to manufacture and was used in air conditioners, refrigerators and propellants in aerosol sprays (Elkins, 1999).

After the synthesizing and marketing of this gas, in 1973 it was finally found to cause detrimental irreversible thinning to the ozone layer in the Earth's stratosphere. CFC's are made up of Chlorine (CI), Oxygen (O), Fluorine (F) and Carbon (C). When ultraviolet light rays (UV) strike CFC13 molecules, and break down the bond, releasing the Chlorine atom.

The greenhouse effect is a natural process in which the Earth is warmed 33 degrees celcius warmer than it otherwise would be so that life in Earth can exist. When the sun's rays reaches the Earth's atmosphere some of the energy is reflected back into space and the rest is absorbed to warm the Earth and re-radiated by Greenhouse gases such as Carbon Dioxide, Methane and Nitrous Oxide (Department of Environment, 2014). Although the Greenhouse effect is a natural process the 'Enhanced Greenhouse Effect' has recently become an issue due to an increase in the emission of Greenhouse Gases by humans, making the enhanced greenhouse effect an anthropogenic mean (Department of Environment, 2014). The enhanced greenhouse effect is an increase in the concentration of Greenhouse gases in the atmosphere such as Chlorofluorocarbons. This links back to the cause of ozone depletion, being the release of CFC's into the atmosphere.

This proves that there is no individual link between Ozone depletion and the greenhouse Gas effect, however Chlorofluorocarbons are a Greenhouse gas that directly contributes to ozone depletion.

An Analysis of the Death of the Ozone By the Greenhouse Effect. (2021, Oct 31). Retrieved from http://envrexperts.com/free-essays/essay-about-analysis-death-ozone-greenhouse-effect 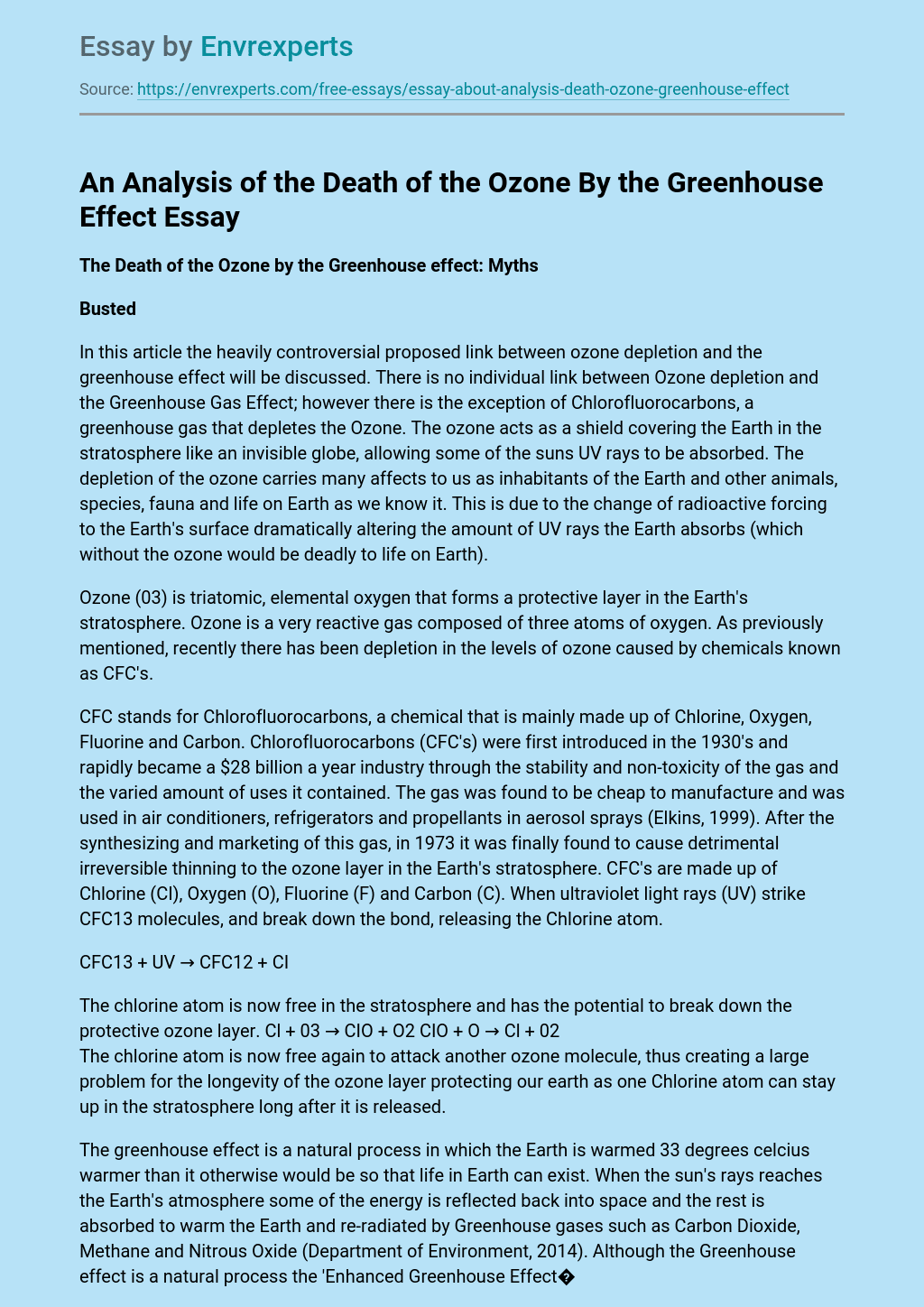