Our planet can be considered globally as a living organism in which each single part interacts with the others in an extremely delicate way. Human activities, which often alter this equilibrium, lead to a homeostatic reaction that tends to re-establish the loss (or missing) equilibrium by eliminating all the perturbant elements. Actually, Earth's atmosphere has never been unchangeable: its composition, temperature and auto-depuration ability have continuously fluctuated since the planet's formation. Nevertheless, the speed of such changes has increased, particularly in the last two centuries: the atmosphere's composition has mutated much faster than in any other period of human history.

Don’t waste time
Get a verified writer to help you with An Analysis of the Dramatic Effect of Gas Pollution on the Environment
Hire writer
$35.80 for a 2-page paper

This has created a huge degenerative environmental problem that has preoccupied scientists for decades, since it concerns the entire biosphere. This climatic change, potentially caused by an ever-increasing hole in the ozone layer, is known as the greenhouse effect.

The greenhouse effect is caused by certain gases present in the atmospheric compound that absorb infrared radiation and are emitted by sun-heated surfaces of the Earth and redirected downward.

One of the gases most responsible for this phenomenon is carbon dioxide, "released to the atmosphere when solid waste, fossil fuels (oil, natural gas, and coal), and wood and wood products are burned" (1). Although many other gases present in the atmosphere in inferior amounts also contribute, including: methane, nitrogen oxide, ozone and several chlorofluorocarbons (CFCs: compounds that contain chlorine, fluorine, carbon and rarely hydrogen). In addition, these chemical compounds (also known as Freons) yield to another atmospheric phenomenon called the hole in the ozone layer.

CFCs, in particular, were produced in large amounts during the 1920's and, since then, have been utilized as refrigerant for freezer alimentation and air conditioning devices. These inert gases do not degrade easily within the troposphere layer, the lower atmospheric level, and thus tend to reach the higher band, the ozone layer. This spherical envelope, just after the stratosphere's lower limit, constitutes the Earth's protective shield against ultraviolet radiation by preventing high energetic rays from reaching the Earth's surface. Ultraviolet radiation is powerful enough to demolish important biologic molecules, such as DNA, and if insufficiently filtered, can increase incidence of skin tumors, cataracts and immune system deficiency. In the last few decades, forecast researchers noticed that the ozone strata above the arctic areas during spring were diminished by about 40%: a "hole" was widening in the stratospheric layer. Considering the importance of such ultraviolet penetration effects, scientists focused on discovering the cause of this layer depletion that grows every austral spring in the inner side of the South Pole vortex. Unfortunately, the cause was, once more, identified as stemming from the pollution phenomenon.

This is explained by the fact that the increase in greenhouse and ozone gases occurred right after the Industrial Revolution, and was blamed on exaggerated use of fossil fuels, and the considerable deforestation that every year eliminates many hectares of forestation. This fast increase could cause, in the near future, a significant rise in temperature that, according to scientists, is already in progress, and a space-time alteration of precipitation patterns. Such phenomenon would have a considerable impact on the environment, representing a threat to natural ecosystems, agricultural production and human installations. For example, certain forests growing in different geographical areas develop features depending on the temperature. Forests would probably not be able to handle a higher rate of migration due to a rise in heat because plants are relatively motionless and do not spread as easily as animals. The movement toward the poles of the climatic areas at such a speed would probably abandon several species or even entire ecosystems. In addition, habitat modification or destruction would have dramatic consequences on the planet's biodiversity estate. Earth's rise in temperature could also determine the reduction of watercourses due to accelerated vaporization. Moreover, average summer precipitation could decrease in center-continental areas, as forecasted by climatic models. Higher evaporation speed and lower precipitation availability would increase irrigation needs, weighing heavily on the already precarious hydro (water) sources. Furthermore, there would occur a significant worsening of the quality of drinking water because equal amounts of polluting substances would be diluted in smaller fluvial water volumes. The temperature increase could also lead to melting of the glaciers resulting in growth of the sea (marine) level. Such an event could destroy installations and ecosystems in coastal zones and also lead to salt excess in the freshwater strata.

The overall situation has led to precarious results: even though all the biggest industrial countries have environmental laws which restrict the production of polluting materials, large amounts of  catastrophe. Today, the consequences of this phenomenon is becoming more and more tangible: since the end of the last decade, Earth's average temperature has increased by almost one degree Kelvin, and the annual average of skin tumors increased to the highest statistical peak in human history. Forecasters, geographers and astronomers have tried to predict possible consequences of such events in the future, but no one knows for sure how our planet is going to react. Nevertheless, several international organizations, such as the United Nations, are already fighting against pollution and its results, passing many environmental laws with which all the member countries must deal. Are these organizations going to succeed in keeping our environmental features constant? Or is this really going to ruin important natural settings permanently? Earth, as a global organism, has been in rebellion against human settlements and products for centuries, and we are now facing the consequences of our actions.

An Analysis of the Dramatic Effect of Gas Pollution on the Environment. (2021, Oct 31). Retrieved from http://envrexperts.com/free-essays/essay-about-analysis-dramatic-effect-gas-pollution-environment 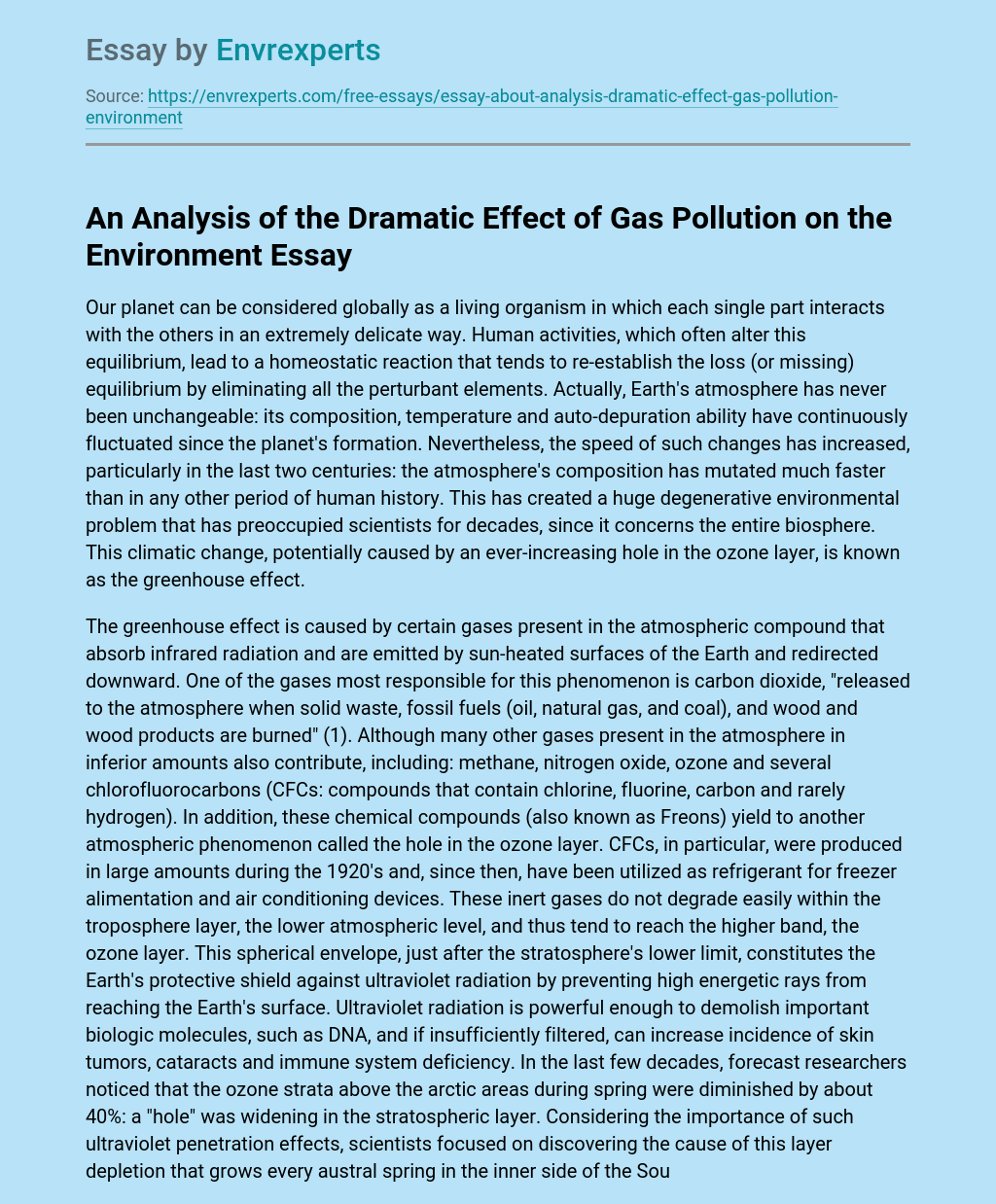