An Analysis of the Effects of Global Climate Change

Without doubt, global climate change will impinge on the lives of people and the environment in numerous ways. Global warming is not an issue, the aftereffects of which will be experienced much later. It is currently influencing the lives of many people. The recent scorching weather is not entirely a natural phenomenon. Neither is the volatile one causing havoc in various parts of the earth. Humans are the main cause of global warming in certain ways, who are experiencing its aftermath, which will only get scarier.

Don’t waste time
Get a verified writer to help you with An Analysis of the Effects of Global Climate Change
Hire writer
$35.80 for a 2-page paper

From the onset, global warming appeared to be a noble idea, specifically for the populations living in the northern climate zones. Nonetheless, for some time, scientists have pointed out long-range implications, for instance, a threat to the global supply of food and a rise of the sea level. This list has kept on expanding ever since. By the commencement of the twenty-first century, it had become evident that climate change would come with grave damage to many regions with some being affected more than the rest (DeWeerdt).

There can be other significant unforeseen effects. Most of them will be harmful, since natural systems and humans are accustomed to the current climatic conditions. The climate system and various ecosystems are intricate and only partially understood. Thus, there is the probability that the effects will not be as bad as they are thought to be. However, the impacts may turn out to be worse.

If the level of carbon dioxide keeps on rising twice in comparison to the pre-industrial level, and the amount of several other greenhouse gases will increase, if humans do not take care of it soon, the aftermath will certainly be catastrophic.

A rise in temperatures will definitely have an impact on the human health and diseases, to which people are exposed. The world caught a glimpse of this back in 2003, when Europe experienced several instances of human diseases that killed scores of people. Arguably, heat strokes are likely to augment with an increase in temperatures. Consequently, such diseases as malaria will spread ("Effects of Global Warming"). Parasites from tropical areas may move to temperate zones, as the weather gets warmer. Mosquitoes are a perfect example, due to malaria is predicted to spread across the globe. Some scientists have also envisaged that asthma may increase around the world, due to allergens that cause it will be a common phenomenon.

The melting of the Arctic and Greenland ice sheets should be a worrying trend, especially with regards to its speed (Keskitalo, 78). Consequently, it will diminish the salinity of the oceans, and may divert or weaken oceanic currents. Such a process will lead to the freezing of places that have a temperate climate, for instance, Northern Europe, which can look like Labrador. Ironically, global warming can also lead to excessive cooling in some regions (Keskitalo, 113).

Many people also argue that globalization fuels climate change. Industrialization ideologies cause people to cut down tropical forests at an alarming rate. Moreover, agriculture is currently responsible for close to 25 percent of the globe"s carbon dioxide emission, about 60 percent of methane, and approximately 80 percent of nitrous oxide. Notably, all these are intoxicating greenhouse gases. Unless there is an immediate switch to sustainable and locally-oriented organic agricultural activities, a greater amount of carbon dioxide will be released into the atmosphere.

Moreover, global stratification has made things even worse. There is a huge difference and the level of inequality between rich and poor nations. The current debate is that the former are the greatest contributors to global warming, while the latter are affected by the consequences. This statement holds some truth. Moreover, poor nations do not have the necessary capital or resources to deal with the consequences of global warming. On the other hand, rich countries have the capacity to avert this issue, but do not have the willpower.

As a result, there is the need for reviewing human ecology. Notably, all ecosystems are linked to the human environment. These are essential, due to they regulate the world"s geophysical cycles of energy, nutrients, soils, climate, and water, which support and increase natural capital (Liu, 145). If these are interfered with, then the life known today will be affected. All manufactured products in the human environment stem from natural systems.

To conclude, all these adverse effects are expected to face the current generation. As far as the more distant future is concerned, if emissions keep on rising, whether naturally or manmade, in the next century, then it will be impossible for the Mother Earth to handle greenhouse gases. The aftermath will last for several more centuries before being fully realized.. Probably, sea levels will be many meters higher, while the average temperature will rise far above the current index.

An Analysis of the Effects of Global Climate Change. (2021, Oct 31). Retrieved from http://envrexperts.com/free-essays/essay-about-analysis-effects-global-climate-change 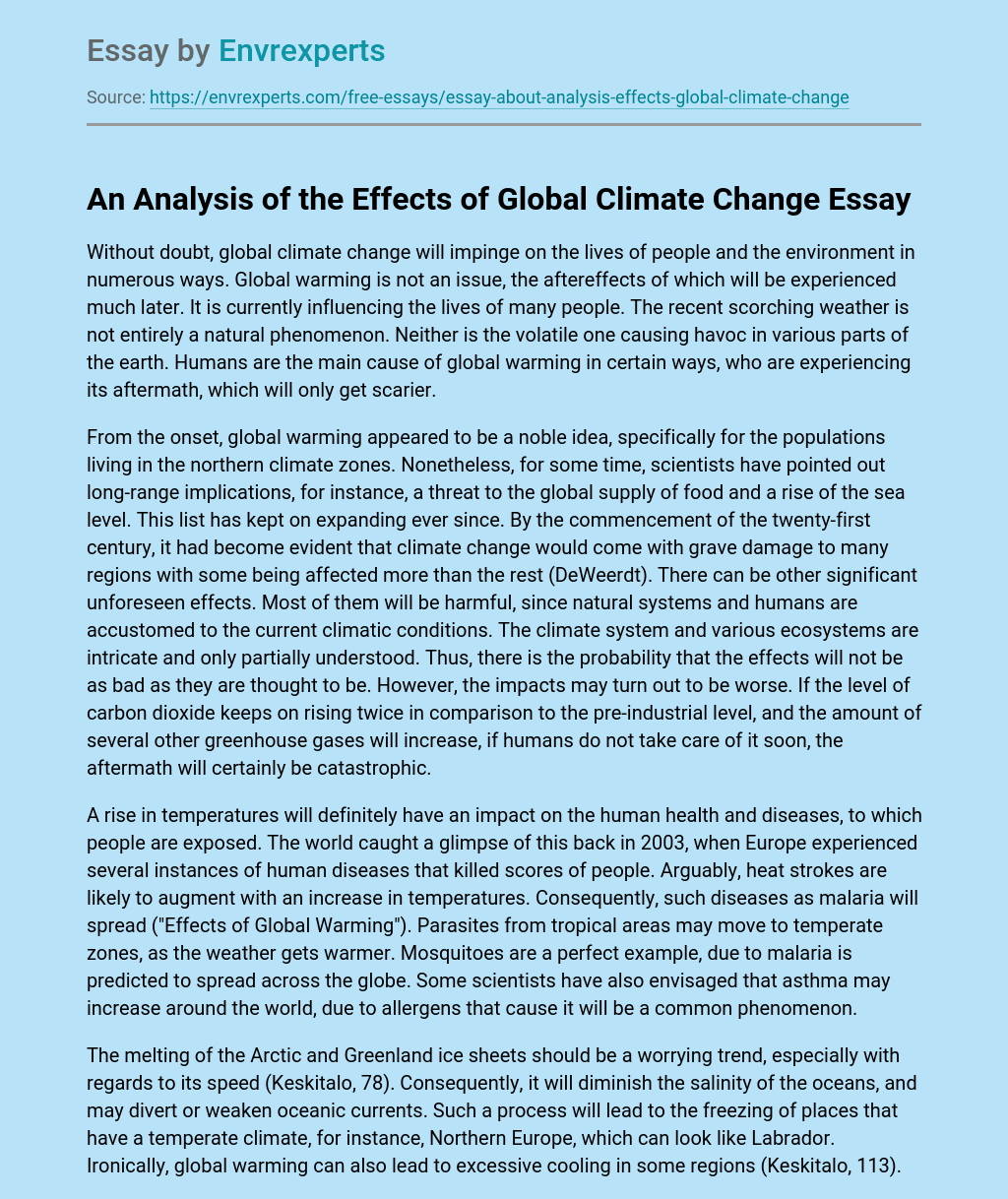