Analysis of the Effects of Population Growth

The global population has continued to grow that may be attributed to improved living conditions and a decreased death rate. Africa has the world's fastest growing populations due to a decrease in infant mortality rate and improvement of life expectancy (Scovronick et al., 2017). Data from the World Economic Forum indicate that the birth rate in Africa is about five children per woman. One of the developing countries experiencing a fast growing population is Uganda which contributes about 3.4% of the total world population.

Don’t waste time
Get a verified writer to help you with Analysis of the Effects of Population Growth
Hire writer
$35.80 for a 2-page paper

However due to the increased number of people in the country, the nation has a high rate of greenhouse emissions that have negatively affected the country as well as the globe in various ways (World Economic Forum, 2018).

Greenhouse gases cause health issues around the world since the gases trap heat in the atmosphere leading to global warming. The emission of greenhouse gases has continued to increase across the globe which raises a major concern due to the harmful effects of these gases to the environment and human health (World Economic Forum, 2018). Information provided by the United States Agency for International Development indicate that Uganda emitted about 50 million metric tons of greenhouse gases in 2012 with the agriculture sector contributing about 50% of the total emissions followed by the land use and forestry sector which contributed about 40% (Climate Links, 2020). Uganda has implemented several strategies to reduce greenhouse emissions by 22% before 2030.

If the current trends continue without intervention and control, the world will experience the effects of global warming such as extreme weather, shifts in climate, rising sea level, and animal extinctions.

Different countries across the world have partnered to address this problem due to the future impact that this will have on future generations (Climate Links, 2020). One of these is the Paris Agreement where 73 countries made an international pact to address this problem. The United States also created a climate action plan in 2013 to combat this problem. Campaigns should be started to inform the public on the need to be responsible and accountable in their activities that contribute to the emission of greenhouse gases (Fuglestvedt et al., 2018).

This is because some gases have a high capacity for absorbing heat and infrared radiation (Heller et al., 2018). Greenhouse gases may remain in the atmosphere for a long time that may include thousands of years increasing the negative effects associated with these gases. Although these gases may be produced from different countries, the mixing of the gases in the atmosphere will result in negative effects all over the world due to a shared atmosphere (United States Environmental Protection Agency, 2020). Some of the processes that influence greenhouse gas concentrations include tectonic activities, vegetation, and soil. These gases trap heat in the atmosphere and reflect the heat back to the earth leading to global warming. This heat may be reflected back by the clouds and other reflective surfaces on the earth's surface such as ice while the land and oceans absorb the rest (United States Environmental Protection Agency, 2020). This helps to decrease the greenhouse effect by maintaining a favorable earth's temperature of 15 degrees Celsius.

Section II. How Emissions Causes Problems for the Developing World

Countries that produce the most greenhouse gases include China that produces about 27% of the world's greenhouse gas emissions, United States that produces about 15%, United Kingdom with 10%, and India which produces about 7% (Fuglestvedt et al., 2018). Emissions have negatively affected Uganda's economy which is attributed to the economic status of developing countries. Uganda is unable to mitigate some of the negative effects associated with global warming as the country has more needs that are important to sustain the nation (Kiggundu et al., 2019). The country largely relies on developed countries for support in diverse aspects. One of the problems experienced in Uganda is climate change due to global warming negatively impacting food production. Since Uganda does not have adequate food production, this will mean that most of the citizens will die from starvation, as most of them are poor and do not have adequate finances to access basic products (Kiggundu et al., 2019).

The country does not have adequate funds to implement some of the measures that help address global warming such as transitioning to renewable energy. One of the key aspects that has been identified to contribute to the increased emission of greenhouse gases in Uganda is the growth in its economy as the country cannot afford safe alternatives that require huge capital to develop and implement (Climate Links, 2020). Global warming has led to massive droughts that have negatively affected individuals in this country who already face food insecurity. Emissions in this country also lead to air pollution that has led to a large number of deaths. This is attributed to the harmful gases in the atmosphere that must be reduced since they can harm human life (Climate Links, 2020).

A political challenge faced by Uganda due to these emissions involves the lack of accountability for leaders who have a responsibility of ensuring that their country and citizens are safe from the emissions that have a negative effect on their health (Kiggundu et al., 2019). Most political leaders utilize most of the resources in mitigating the effects associated with gas emissions instead of using the resources for development purposes. This has negatively affected the economy and stability of this nation. Policymakers also face a challenge in developing policies to prevent some of the human activities that contribute to greenhouse gases as people depend on these activities for their development and the development of the country (Kiggundu et al., 2019).

Since adopting some of these alternatives is expensive, the government can support individuals and involve private partners to ensure that these new options are effectively implemented (Erickson, 2017). Human activities, on the other hand, are important for human survival which makes it difficult to control the human patterns. One way of addressing deforestation and agricultural activities is to develop alternative methods that are safe and don not harm the environment (Erickson, 2017). One way of reducing greenhouse gases is by replanting trees to reduce the buildup of carbon dioxide in the atmosphere as the trees use carbon dioxide during photosynthesis. Farmers can be educated in the importance of planting trees as well as given the necessary support to sustain their production with new interventions (Erickson, 2017).

One important area that a country can use to reduce greenhouse gasses emissions is developing effective policies that govern the use of fossil fuels and safe agricultural methods that largely contribute to the high rate of greenhouse gases in the world. Since human activities are the main contributors of these emissions, this means that a large population in a country/world leads to an increased rate of greenhouse gas emission (Scovronick et al., 2017). The earth will also be unable to absorb these gases through natural processes as most of the trees that help in absorbing carbon dioxide will be cut in the effort of creating human settlements. A large population will also mean increased food production where forestland is converted into agricultural land further worsening the situation (Scovronick et al., 2017).

To effectively address the problem of greenhouse gas emissions, it is important to hold every person responsible which will enhance the implementation of evidence-based interventions. Not involving the public will affect the outcome of implemented strategies since individuals will not be aware of the consequence of some of their activities on the environment (United States Environmental Protection Agency, 2020). One way of involving the public may be through public forums and discussions that enlighten people across every nation on the harmful effects of some of their activities. Countries should also develop effective policies where policymakers involve key stakeholders in the affected sectors that will lead to the development of effective policies as well as allow some of these important sectors to continue with operations (Heller et al., 2018). Developing countries can also partner with other nations that will enable them to access important information regarding the development and implementation of evidence-based strategies to address this problem. This will also allow the countries to access important resources such as funds and skilled personnel to guide in the implementation of these strategies (Heller et al., 2018).

Analysis of the Effects of Population Growth. (2021, Oct 31). Retrieved from http://envrexperts.com/free-essays/essay-about-analysis-effects-population-growth 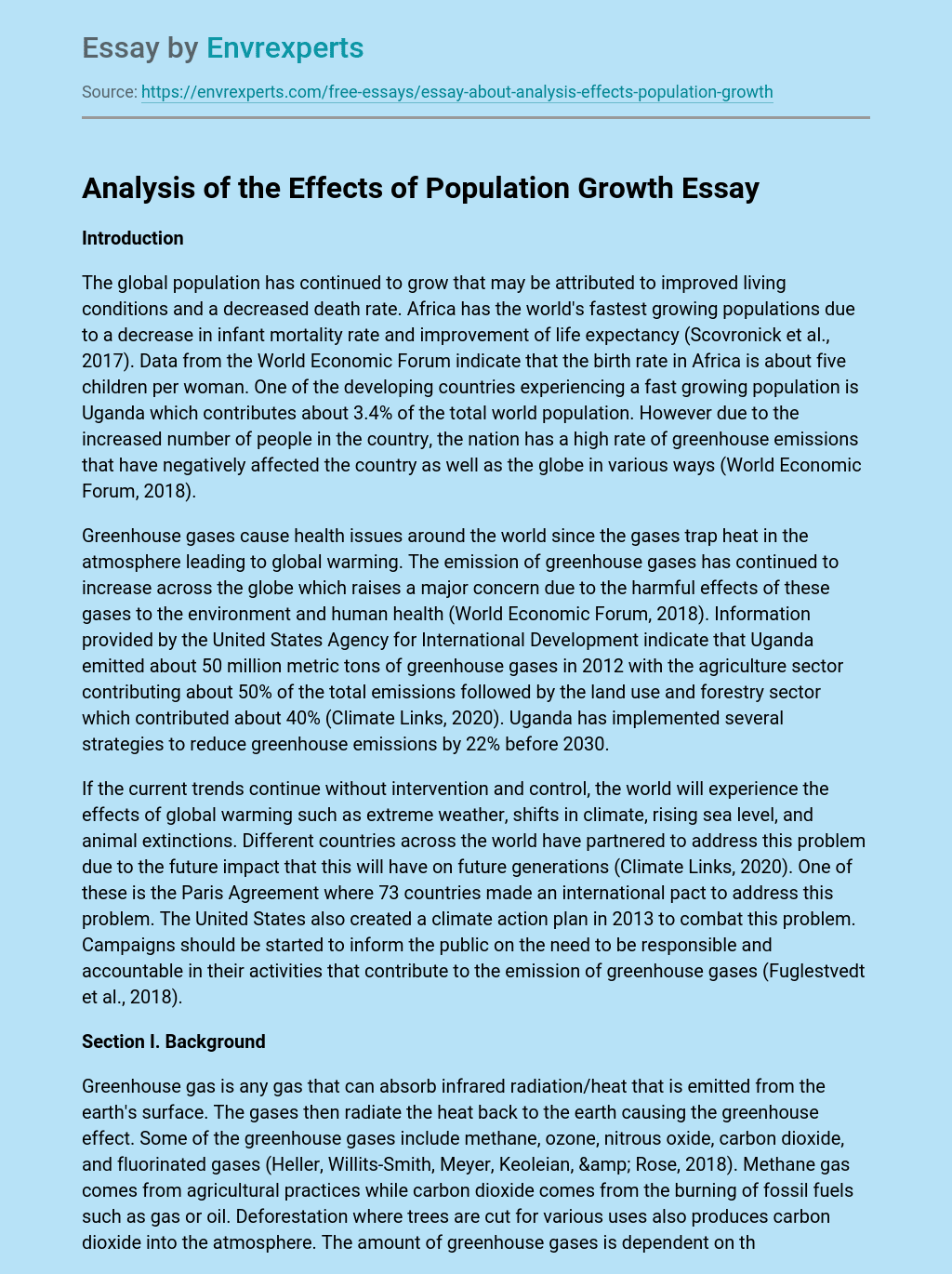