An Analysis of the Environmentalists Which Began Making ASensational Claim

In the late 1960s and early 1970s some environmentalists began making a sensational claim. The worlds ever increasing population, they claimed, would soon outstrip the planets limited resources leading to an environmental disaster. In these doom and gloom scenarios, a massive worldwide famine was just around the corner. The number of people would keep increasing while the amount of food available would stay the same or even decline. The result, the experts argued, was famine by the early 1980s at the latest.

Don’t waste time
Get a verified writer to help you with An Analysis of the Environmentalists Which Began Making ASensational Claim
Hire writer
$35.80 for a 2-page paper

The only way to decrease the severity of the impending disaster was to adopt strict policies to control population. There will soon be 6 billion human beings on Earth: according to the latest population estimates released by the United Nations. At this rate, the world population is doubling every 40 years. On October 12, 1999 the world's population will reach 6,000,000,000 people. The is a very vast subject, but my assignment will only explain the three major points of the. The biggest concern of human beings is the decreasing rate of resources, as the years go by, resources are on a constant decline.

Which means in a couple of years, if the population continuous to increase, are resources will disappear in a short term of time. Also, I will try to explain the reasons why this subject became what it is now . Why did did the population increase so much in the past decades, will be answered. And finally, will be looking at solutions to solve this problem in ethical and unethical ways.

If everyone on the planet today would adopt a North American lifestyle, natural resources would quickly disappear. Luckily most nations are still careful. They will need to remain so while improving their standard of living. It will be necessary that others in wealthy nations curb their consumption and wastes. Our survival depends on population control as well as a better management of natural resources. Being limited in quantity, natural resources need to be managed accordingly. A new management of the planet's resources has to be planned. In spite of the population increase, famines have become less frequent in the past two hundred years, thanks to phenomenal agricultural yields, and global economy. In the last few years several African countries have been affected by famine. The causes were all due to political problems, including civil wars, that disorganize the economy, paralyze transportation, and prevent emergency food drops to reach their destination. Famine is no longer due to a global food shortage. Everyone's probably heard predictions that the world is going to run out of some essential resource. From copper to oil to food to hundreds of other things human beings use, "experts" like to come along and predict the imminent exhaustion of resources. The last two centuries have proven not only these individuals, but the very models underlining scarcity of resources, to be wrong.

For example, food. Several times over the last 40 years so called "experts" predicted global famine because increases in food production couldn't possibly keep up with population growth. Thankfully, they were wrong. The best indications today are that food production will continue to outpace population growth for the foreseeable future statistics say.

A other example is oil. Predictions of the world using up all its oil have been around for at least 70 years. They reached their peak in the 1970s with the oil crisis brought on by the Oil and Petroleum Exporting Countries' attempt to raise oil prices by voluntarily limiting supply. As the price rises, however, the quantity demanded by consumers decreases. As the price of gasoline increases, for example, consumers will tend to purchase more fuel efficient automobiles or find automobiles which use fuel sources not dependent on oil. This does not require any great leap in technology; there are already numerous alternatives to oil which would become economically feasible if the price of oil ever jumped significantly. Natural gas, for example, is likely to replace oil as the primary source of energy for the future sometime in the next century. In 1994 one of every two people lived in the city, while only one in ten did so in 1900.

For hundreds of thousands of years the human population was growing at a low but steadily increasing rate. Then in less than 200 years, the world population went from 1 billion to 6 billion people. Why? Because the balance between birth and death has been broken. The recent global population growth is not the consequence of ncreased birth rates but of an unprecedented decrease in death rate. The 20th century has resulted in victory over famine-related and infant mortality, as well as significant advances in public health and medicine. In the world, five women give birth every second. UN projections show that, in the next 50 years, family planning would be widely used all over the world and birth rate would become universally low. Simultaneously, average life expectancy would reach at least 70 years. Population growth would then start to slow down until it stabilized around the end of the next century. A century from now the world population will probably reach 10 to 15 billion people. Will the world be a nice place to live in? Specialists have mixed opinions. Optimists think that the planet can accommodate a much larger population. Others, more pessimistic, predict catastrophes before ever reaching this number.

Researchers have looked for years to find solutions to fight the the overpopulation, but we cant just except any solutions. Governments cant just tell the population to stop giving birth, it would be a horrifying reaction from is people. Here are some solutions from researchers that are ethical and unethical. In some countries, particularly Africa, the AIDS epidemic has reached devastating proportions. In the most affected country, Zambia, nearly one in five women of childbearing age is infected. The death rate has already increased by 50%. Eventhough mortality has increased, it has remained less than the birthrate and the population has not decreased. No other country has seen its population decrease because of the AIDS virus, and there is little chance for this to ever happen. There are, however, serious problems concerning the distribution of the earth's goods. But this poor distribution is the result of sin, not overpopulation. Many of the world's calamities and starvation problems are caused by political corruption within Third World countries and a lack of generosity on the part of those individuals and nations with greater abundance. With modern agricultural equipment, adequate food storage facilities, and technology to ensure clean drinking water, Third World countries like India could make great strides in becoming self-sufficient; and

developed countries like the United States could help provide these improvements. Many people who support abortion claim overpopulation as a major reason why abortion is not only a right, but a necessity. They claim that because of the enormous amount of people in the world, if all mothers kept their children within their womb, there would not be enough land and food to provide for them. But is this a ethical way of solving problems…

Overpopulation is the root cause of all environmental deterioration. Global warming, the ozone hole, rain forest destruction, desertification and all kinds of pollution, weather breakdown, and natural disasters are only signs of this already deadly monster. Population grows exponentially. That is, each generation is a little bigger than the generation before, and so more people have more children, and the next generation is bigger yet. Population grows faster and faster. On the other hand, food production is limited by available farmland, water for irrigation, and so on, and so cannot grow without limit. Food production grows more and more slowly. Therefore, it inevitably follows that as population continues to grow faster while food production grows more slowly, sooner or later population will outstrip food supply, and it just will not be possible to feed all the people. Human societies will always face significant challenges and problems to overcome. New diseases will almost certainly emerge over the next century, as they have ever since human beings began living in large groups. Technological upheaval and change will

be the rule rather than the exception. But provided that democracy and freedom continue to spread around the globe, albeit at a sometimes incredibly slow pace, we should expect the 21st century to be a much better place to live to the same degree that the 20th century has been immeasurably better for humans than the 19th century was.

An Analysis of the Environmentalists Which Began Making ASensational Claim. (2021, Oct 31). Retrieved from http://envrexperts.com/free-essays/essay-about-analysis-environmentalists-which-began-making-asensational-claim 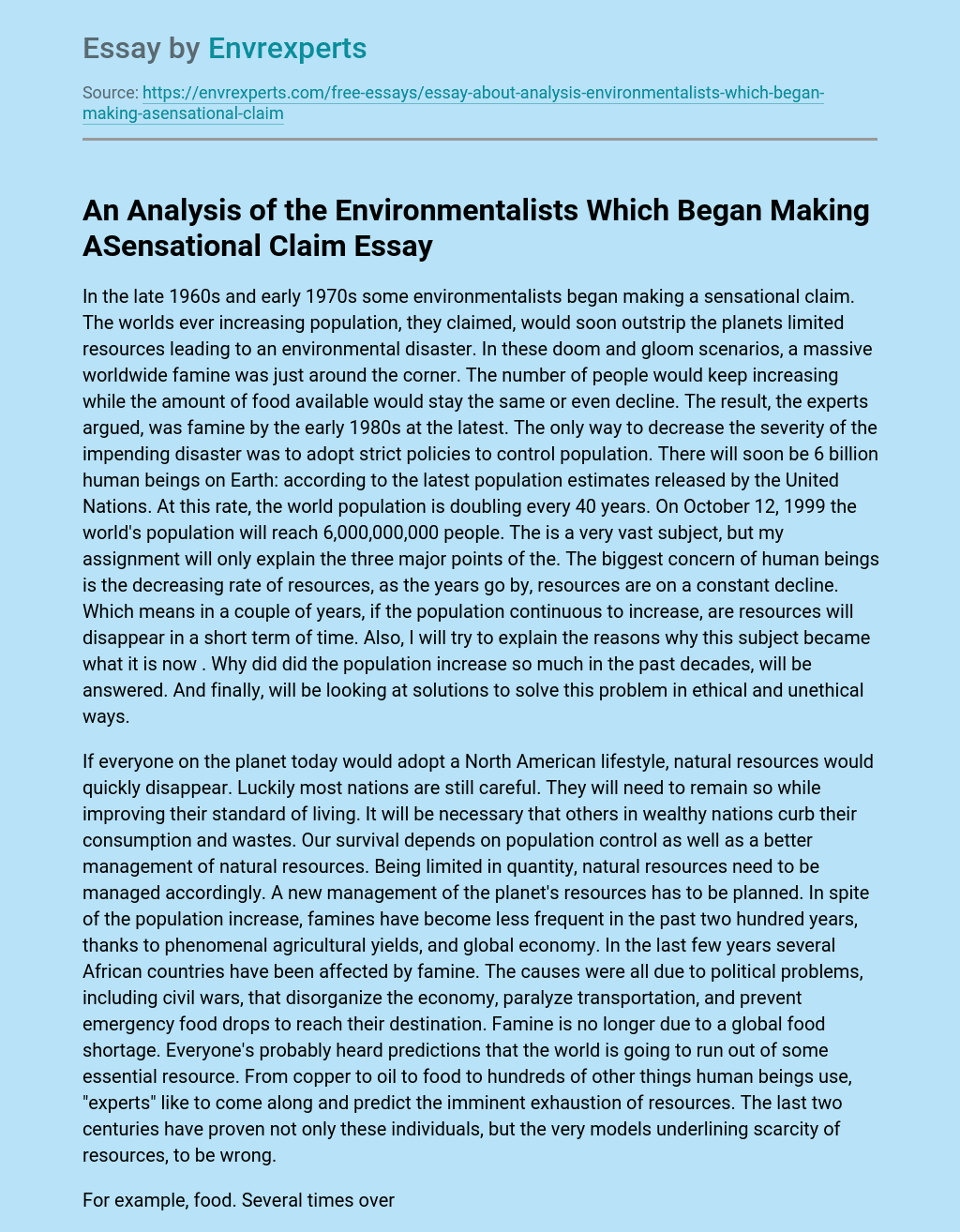