An Analysis of the Factors Contributing to the Decrease in Biodiversity

Biodiversity is the variation in animals and plants in an ecosystem. Earth is full of biodiversity but in the last 200 years, it has been diminishing more and more. This is due mostly to human activities. Rapid industrialization has benefited humankind in countless ways but it has also wreaked havoc on the environment. Humans have been destroying the environment because of the need for more and more space but this must stop. Both an economic and ecological problem, the long-term cost of the loss of biodiversity makes it the most important problem the world faces today.

Don’t waste time
Get a verified writer to help you with An Analysis of the Factors Contributing to the Decrease in Biodiversity
Hire writer
$35.80 for a 2-page paper

Biodiversity is very important because it provides us with such priceless resources of food, medicine, and beauty. The loss of biodiversity is a very important problem because we would be losing all that nature can provide us. Biodiversity's importance is summed up best in this quote from The Convention about Life on Earth: "At least 40 percent of the world's economy and 80 per cent of the needs of the poor are derived from biological resources.

In addition, the richer the diversity of life, the greater the opportunity for medical discoveries, economic development, and adaptive responses to such new challenges as climate change." Biodiversity loss can do massive damage to the economy. Businesses like pharmaceuticals, fishing, and farming depend on nature to provide them with resources. Without those resources, there wouldn't be any business. Without a lot of those businesses that depend on those resources, the economy would be devastated. Another important thing about the loss of biodiversity is that it increases an area's chance of getting hit by a natural disaster.

Also the loss of biodiversity shrinks the amount of natural materials that could be used to develop drugs and medicines. For example, a tree called the Pacific yew previously thought useless was discovered to contain a substance that can kill cancer cells. If this one tree that we already know exists contains such a powerful substance that could save so many lives, so would many other to-be-discovered plants but we may never know if humans keep destroying the environment. A third reason why biodiversity is important is simply because it is magnificent. If you destroy it, it would be impossible to recreate so you must take care of it to preserve its unique beauty.

There is no one reason for the loss of biodiversity, it is a combination of many factors. Habitat destruction is one of them. Many different species of wildlife have been driven out of their homes because of humans clearing natural land to harvest its natural resources or to make way for cities. The destruction of habitats includes the destruction of precious areas of rainforests. Pollution (air pollution, water pollution, soil pollution) has also caused losses in biodiversity. Air pollution can cause chemicals to get into the rain which plants can absorb causing the animals that consume them to also ingest the acid rain which can cause the plants to die and the animals to get sick. Pollution has also caused global warming which has caused changes in the climate which has led to the endangerment of, not just species, but also the entire Earth in general. Human overpopulation is also a major contributor to the problem of biodiversity loss. With the population booming at such a rapid pace because of the rise in the standard of living, humans now need more food and space. They need more land to grow crops but since space has run out, humans are taking it from other species, clearing the land to make cities and farmland. This destroys not only homes, but also plants that are relied on for food. This causes plants and animals, whose homes have been wiped out, to die out. This could also cause species, whose homes have been destroyed, to migrate to a new habitat and displace other species already living there. Invasive species brought into new habitats because their homes have been destroyed can disrupt the balance of the ecosystem and cause competition. Competition between two species can lead to one of them losing and becoming extinct. All of the reasons for the loss of biodiversity listed above are caused by humans.

One particular area that has lost much of its biodiversity is the Amazon Rainforest, the home to the largest amount of living plants and animal species in the world. Human settlement and development of the land in the Amazon has been destroying the rainforest and the millions of species of plants and animals living there. Over 232,000 square miles of it has been destroyed since 1970, when the Brazilian government built over 9,000 miles of roads through it. These roads made the forest easily accessible to farmers, who began to clear the trees to make space and further their production. The soil of the Amazon is not the best and is only productive for a short amount of time. This causes farmers to move constantly, looking and clearing new land for their crops.

Another area affected by the loss of biodiversity is the Caribbean. Many coral species have been severely affected by the bleaching of the tropical reef system. This process of coral bleaching causes the coral to lose its zooxanthella, or algae, when the water is warmer than its normal temperature. It is usually warmer due to UV rays from the sun or pollutants. The zooxanthella gives the coral 90% of the nutrition it needs for growth and reproduction. Without this algae, the coral will become weak and die. Without coral reefs, fish will be left without a home and their lives will be even more at risk.

A third area hit by the loss of biodiversity is Southeast Asia. Its coral reefs, which are many country's main source of fish and protein, are endangered. Some of the top fish producing countries are located here. About 56% of it has been affected by destructive fishing, which is any kind of fishing that can destroy fish habitat. Different kinds of destructive fishing include blast fishing and chemical use, night spearfishing, overfishing and outside aggregations, and ghost fishing (ex. traps or nets). The dumping of cyanide, a highly toxic chemical, has become a big problem in the coral reefs of Southeast Asia. More than one million kilograms of cyanide has been released into the Philippine reefs since 1960. However, the Philippines is the only country that has taken initiative of the problem. The Cyanide Fishing Reform Program, along with the International Marinelife Alliance, has trained many fishermen to use other techniques rather than using cyanide.

During the past few decades, people have recognized the importance of biodiversity. People stepping up to do more about it and trying the prevent biodiversity loss. Laws have been imposed by governments to counter loss of biodiversity. For example, in Nagoya, Japan, a system of trad-able development rights forces developers who exceed limits on high-rise buildings to lessen their environmental impacts by buying and conserving areas of Japan's traditional agricultural landscape. There have been efforts of reforestation, turning an area back into a forest after it had been destroyed. For example, in Java, Indonesia, newlyweds have to give five tree seedlings to whoever is performing their wedding. Germany is about 30% forest according to the forest inventory of 2001-2003. The United Nations have also been making efforts to promote biodiversity. The UN declared 2010 "International Year of Biodiversity" to raise public awareness about importance of biodiversity. There are also numerous organizations dedicated to biodiversity like the European Renewable Energy Council, the World Wide Fund for Nature, and the Rainforest Action Network.

There plans not just for the present but also for the future. China, a country experiencing huge economic growth coupled with its huge population, is a very polluting country. But China is trying to do its part and set a goal to put an end to all biodiversity loss by 2020 in China with help from the National Biodiversity Conservation Strategy and Action Plan. President Obama has announced plans to reduce global warming by 28% by 2020 by using more solar and natural powered energy. Since over-population is such a leading cause of habitat destruction, countries are trying to promote family planning and the use of birth-control especially in poor highly populated countries like India. But we could also help prevent the further loss of biodiversity ourselves by educating ourselves about the importance of biodiversity, conserving energy, and donating to green charities.

The loss of biodiversity is a big problem. We need biodiversity to provide us with medical resources, business, and nature. Though the world is littered with problems like nuclear proliferation, biodiversity loss is a long-term problem that should be dealt with before it is too late because there is no way to reverse it. The whole world is affected by it especially the Amazon Rainforest, Southeast Asia, and the Caribbean. Worldwide effort by countries like China and America are being made to combat biodiversity loss which shows that we are taking a step in the right direction.

An Analysis of the Factors Contributing to the Decrease in Biodiversity. (2021, Oct 31). Retrieved from http://envrexperts.com/free-essays/essay-about-analysis-factors-contributing-decrease-biodiversity 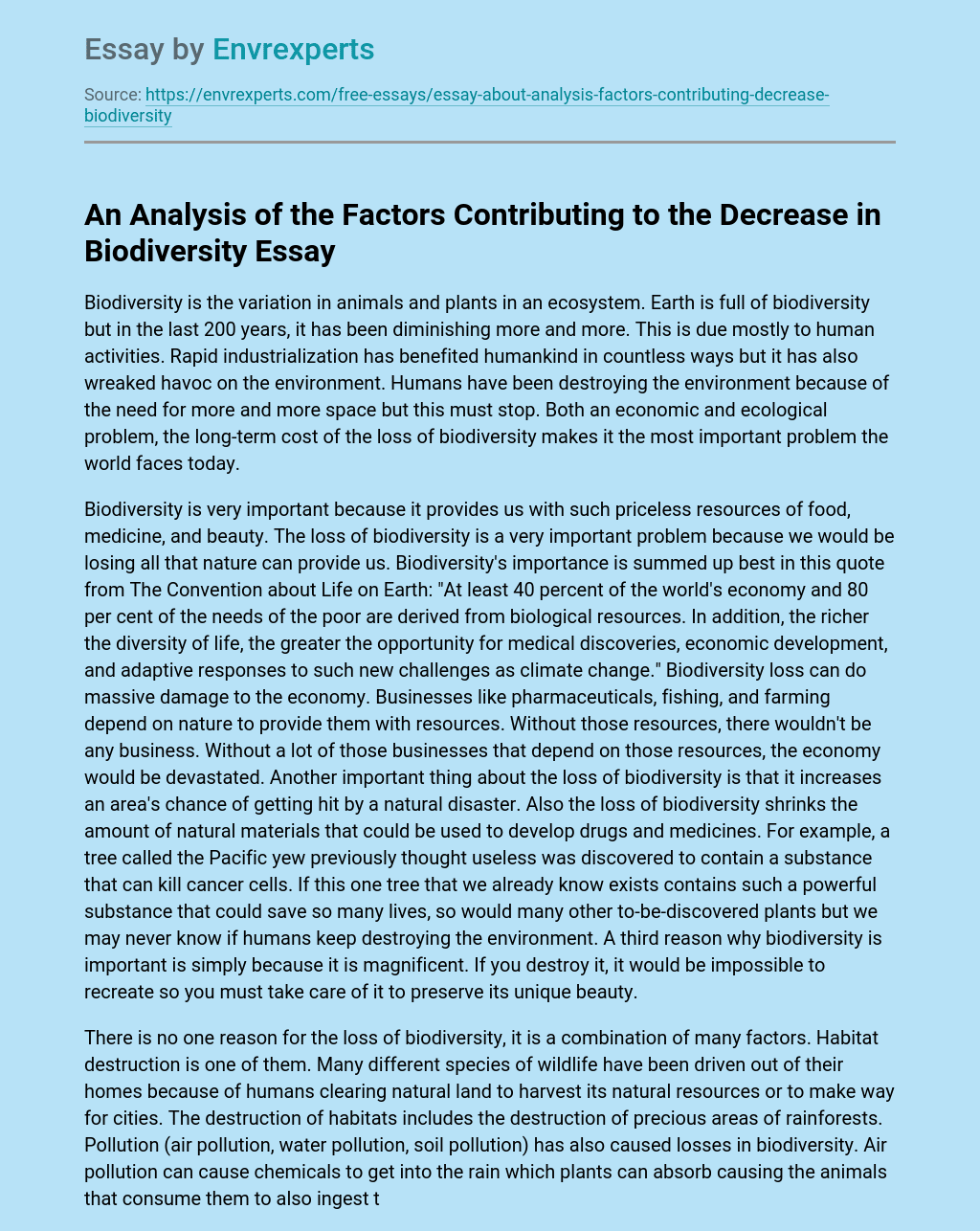