An Analysis of the Global Tradable Pollution Permits

According to the basic theory of microeconomics, mutually beneficial trades are possible with the presence of marginal abatement costs differences. In terms of the trades of pollution permits, the level of pollution remains the same as when it is regulated by law; but the amount spent on pollution control is lower. Thus, we say that the practice of tradable pollution permits increases efficiency.

In this essay, we are going to discuss if the international greenhouse gas permits are a good means of controlling global warming, with consideration of the increased efficiency and the possible failures of the system while it is put into a global context instead of a national setting.

Don’t waste time
Get a verified writer to help you with An Analysis of the Global Tradable Pollution Permits
Hire writer
$35.80 for a 2-page paper

With the aim to protect the global commons of the earths atmosphere, the obligations established in the UN Framework Convention on Climate Change in 1992 were strengthened in the Kyoto Protocol (1997). The protocol sets out legally binding greenhouse emission targets for industrialized countries.

The US Sulfur Dioxide Emissions Trading

With reference to the US case and the Montreal protocol, an international trading system (with monitoring, reporting and enforcement) was made possible.

The US experiment is very successful while sulfur dioxide allowance trading has reduced the costs of lowering acidification compared to the cost of traditional regulations. The flexibility of trading enables electric factories to comply with their commitments at lower cost.

Under the international greenhouse gas emission trading system, country emission would be limited according to their emission targets or Qualified Emission Limitation and Reduction Objectives commitments.

Participatory nations would be required to hold greenhouse gas units equivalent to the amount of greenhouse gases they emitted in order to prove that they had not exceeded their entitled quantity of emissions. With the global tradable market, individual sectors or firms can buy and sell greenhouse gas emissions units from each other.

Comparison between the US (National) and the Global Tradable Pollution Permits

The differences in MAC allow factories in the US to trade actively, making those in trades better off. Actually, banking allows people to trade more flexibly, especially when there’s excess supply/demand of allowances. Surely there are variations in the MAC in different countries; yet, trades are more difficult with higher transaction costs.

The transaction costs of pollution permits trading are much higher when they are held globally. Information about the prices of permits among countries may not be widely available. Also, with exchange rate risks and interest rates risk, global trades are make more complicated. Other than that, there are monitoring (for both emissions and trades) requirements, as well as complicated procedures governing transfers of emission rights.

Private sector exchanges and trades information, while brokers collect and record information on the price of allowances. If pollution permits can be trades like stocks and bonds in the open competitive market, transaction costs can be largely reduced.

Without a unique legal authority, it is difficult to monitor and enforce the agreement. As the agreement has to be translated into different languages, disputes on unclear areas may arise. To modify the system, emissions limits should be stated with the ceilings or baselines, so that individual companies can get started right away. Secondly, the global permit system should make the participants (who have the emission limits) responsible for their legal entities. In other words, the Governments should be bounded by the international agreement and should be responsible for reporting national compliance with the control schedules.

As in the case of US, there are old and new factories, where the marginal abatement costs for different firms are different. According to the production history, location, and some other criterions, factories are granted different number of tradable rights. They can get more rights through auctions and trading with other factories. Yet, when this comes to an international level, it is always hard to determine how many permits each country should be granted.

In the US, bonus sulfur dioxide allowances were issued for reasons of political feasibility, and have extended the emission cap and made the system more complex to administer. Globally, even when there’s no bonus allowance, progress towards implementing an ideal emissions system could be difficult. Rich countries could purchase greenhouse gas units from the other countries, neglecting to implement measures at home. At the same time, poor countries may sell too much pollution units to others, leaving insufficient quotas for themselves.

The difficulty of tracking embodied emissions lead to illegal trades. Relying on domestic legal action to punish illegal trades is not enough; more severe punishments, such as removing a country’s protection from trade provisions or making it ineligible for technology transfer/financial assistance, are required.

For the US, permanent emission limit is enshrined in legislation and any new participants must purchase allowances from existing participants. For the participatory nations, they have to decide whether other suitable entities can opt-in voluntarily by accepting emission limits and undertaking verifiable emission reductions.

Support from the Industry/Widespread Recognition from the participatory nations

In the US, it was clear that the industry would have to comply with the sector sulfur dioxide emission limit once it was enacted in the Clean Air Act Legislation. Support from the industry could ensure the lowest possible compliance cost.

The system-wide emission limit that is set dictates the environmental credibility of the system. It should be widely perceived so as to safeguard progress. Yet, due to the lack of confidence and free-ride problem, the environmental objectives of the Protocol are difficult to be achieved.

The emission of pollution gases is definitely an externality, in which it is an activity of one entity that affects the welfare of another, in a way that is not transmitted by market prices. To deal with the problem, we can set up regulations (traditional method) on the emissions of greenhouse gases, impose taxes on those who emits gases, establish property rights, provide subsidies to discourage people from emitting gases or create a market as described in this essay.

The imposition of taxes/subsidies is infeasible, as it is hard to carry out and administer. Also, it is an unknown for where the taxes should go or where the subsidies should come from. For the property rights method, it has a basic problem of making a clear definition of rights. Usually, countries emit gases in their own geographical borders, where the gases flow to other countries in the high, unbounded sky. It is impossible to measure who pollutes the sky and whose sky is polluted.

Now, when we come to the permits method, it is easy to find its advantages over the others efficiency and flexibility. The technical part of the method may still have lots of problems, with regard to its monitoring and enforcement difficulties. But, in the long run, it will proved to be successful, provided that countries adopt the same philosophy at home, so that the national practices can go in line with the global one.

An Analysis of the Global Tradable Pollution Permits. (2021, Oct 31). Retrieved from http://envrexperts.com/free-essays/essay-about-analysis-global-tradable-pollution-permits 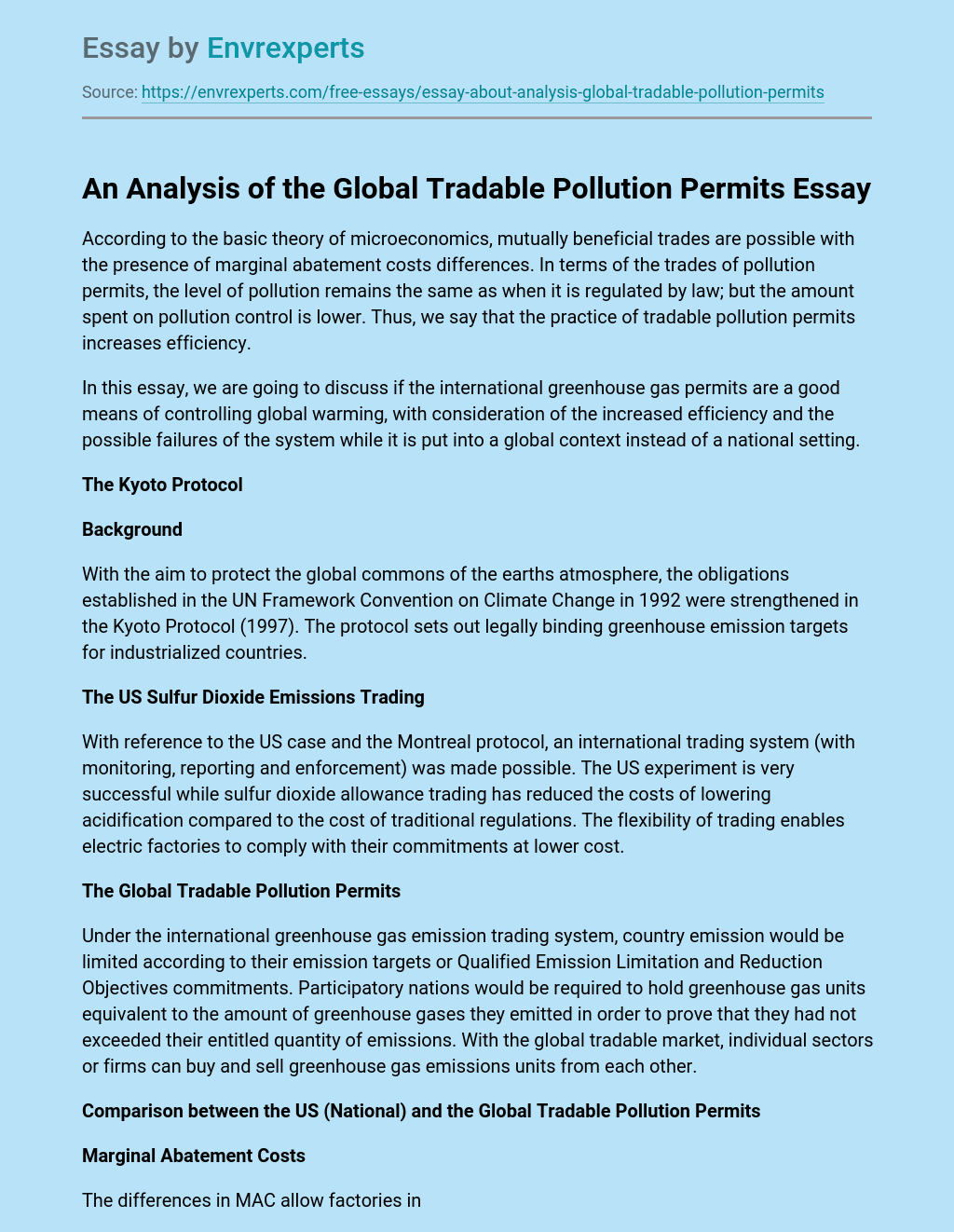