An Analysis of the Greenhouse Effect as a Natural Phenomenon

The greenhouse effect is a natural phenomenon that warms the earth and enables it to support life. Without it, the average temperature on earth would be around -18 degrees C, instead of the current +15 degrees C – a frozen wilderness. It works on the same principles as the ordinary glass garden greenhouse, where glass allows light to get in, but does not allow for the heat to get out. This makes for a much higher temperature inside the greenhouse.

Don’t waste time
Get a verified writer to help you with An Analysis of the Greenhouse Effect as a Natural Phenomenon
Hire writer
$35.80 for a 2-page paper

Light from the sun has no trouble penetrating the atmosphere and reaching the earth's surface, warming it. The earth re-radiates much of this heat in the form of (invisible) infrared radiation. Infrared rays have a longer wavelength than visible light, and for this reason can be absorbed by certain gases in the atmosphere, labelled greenhouse gases. This absorption of heat warms up the atmosphere, which in turn radiates some of the heat back to the earth.

It all seems very straightforward: greenhouse gases trap the sun's heat, warming the planet sufficiently for life to exist. There is, however, one problem: human activity has dramatically increased the amount of greenhouse gases in the atmosphere.

As the various greenhouse gases accumulate in the atmosphere, the amount of infrared radiation that is trapped increases. It is estimated that if we continue at our current rate of CO2 emissions alone, the average global temperature will rise by 1.5 to 4.5C over the next 40 to 50 years.

Although the most important cause, burning of fossil fuels is not the only cause of the build-up of greenhouse gases in the atmosphere. Other causes include deforestation (trees absorb carbon dioxide, turning it into oxygen), the use of fertiliser (a source of N2O), and rotting organic matters (which produce methane).

Because of the many factors involved in the process, it is extremely difficult to accurately forecast the effects of an average global temperature rise of, say, 3 degrees on the earth in general or on Australia in particular. It is, however, possible to make some points with a reasonable degree of certainty.

The sea level would rise anywhere between 30 and 150 cm. This is the result of two factors: a partial melting of the Antarctic and Greenland icecaps, and an expansion of ocean water. It seems obvious that a global rise in temperatures would gradually melt these two big icecaps, producing an increase in sealevels. This is, however, a very slow process that will probably take hundreds of years.

The second factor, expansion of ocean water, will take place in decades rather than centuries. It refers to the fact that heated matter expands: warmer ocean water will expand, producing a rise in sea levels.

Another feature of global warming that seems reasonably certain is that the increase in temperature would not be uniform over the world. Generally, changes at the poles would be greater than at the equator. Cold seasons would shorten, and warm seasons lengthen. Some regions would experience an increase in rainfall, with more damage from flooding and storms. Other regions would become drier

These changes would have enormous effects on agriculture and food supply, as well as the supply of drinking water and public health.

A third forecast consequence of increased temperatures is an increase in tropical cyclone activity. Northern Australia can expect increases in both the intensity and frequency of cyclones, and also the cyclone region will move up to 400 kilometres further South. It is, however, impossible to make any accurate forecasts on actual changes in risk in any particular region.

The effects of global warming on Western Australia could include a reduction in winter rainfall by up to 20% in areas that derive their rainfall from the Easterly passage of cold fronts, an increase in sea level between 0.2 and 1.4 metres, a decrease in the spread of salinity in low rainfall areas, increased wind speeds in the South, and decreased wind speeds in the North. Also, the duration and intensity of tropical cyclones would increase, and they would affect a greater area. These changes in climate will affect every aspect of our lives. Living in Perth will be more like living in Broome or Port Hedland.

These climate changes are likely to have significant effects on our lifestyles, natural environment, coastal areas, and agriculture:

Forests in the South West could come under severe stress by drier and hotter conditions. Forest fires may become more severe and frequent. These effects could, however, be partially offset by forest growth in other regions made possible by increased levels of carbon dioxide.

Flooding of coastal areas may occur because of the rise in sea level. This would put houses, bridges and roads at risk.

Species of animals and plants could be threatened as temperatures, rainfall and ocean water conditions change.

Water supplies could be endangered by the changing rainfall patterns and increased evaporation levels. This might produce long droughts and water shortages on the one hand, and more flooding on the other.

Carbon dioxide is the major greenhouse gas. It is released mainly by burning fossil fuels (oil, coal, natural gas) in vehicles and industrial activity. Other sources of CO2 include burning forests and rotting vegetation.

Only about half of carbon dioxide emissions are absorbed by oceans, forests or otherwise. The remainder stays in the atmosphere, acting as a greenhouse gas.

Released by burning of fossil fuels and plant materials, and by the use of nitrogenous fertilisers in agriculture.

The increase in methane can be linked to the world's growing population and its need for food and disposable goods. The main sources are burning of vegetation, animal digestion, and breakdown of organic matter in landfills. Methane is also released from natural gas leakages, from rice paddies and from coal mines.

CFCs are man made chemicals mainly used in refrigeration, air conditioning, dry cleaning, plastic foams and aerosols. Although they are best known for their harmful effects on the ozone layer,

CFCs are also a potent greenhouse gas. There is an international agreement, the Montreal Protocol, which requires a 50% reduction in the emission of CFCs by the year 2000. In Australia, the use of CFCs in aerosols has been banned since June 1990, and by 1998 all CFCs are to be phased out.

Australia's contribution to the increase in global greenhouse gases is relatively high, due to the high levels of energy use and the dependence on fossil fuels. Australia is the world's fifth per capita producer of CO2 emissions.9 It also has the third highest per capita automotive fuel consumption in the world. 10 Since the greenhouse effect is produced by our use of energy, developing a sustainable energy use program is an essential part of dealing with it. As this will take some time to develop, and will require a change in our lifestyle, there are some practical things that you can do in the meantime.

The first, and perhaps most obvious, thing to do is to reduce your energy use. There are hundreds of simple ways to save energy, so the following is only a list of suggestions and by no means comprehensive.

Try to make as few trips to the shop as you can – this will save on car travel. Buy milk cartons, not plastic bottles. Bring your own bag rather than using plastic bags. Avoid products with excess packaging. Avoid fast food – this is nearly always overpackagaged.

Cycle or walk whenever you can. Try to use public transport instead of your car. Form a car pool with colleagues. Have your car checked regularly – small things like the wrong wheel alignment, tyre pressure, or dragging brakes can increase your car's petrol consumption unnecessarily.

An Analysis of the Greenhouse Effect as a Natural Phenomenon. (2021, Oct 31). Retrieved from http://envrexperts.com/free-essays/essay-about-analysis-greenhouse-effect-natural-phenomenon 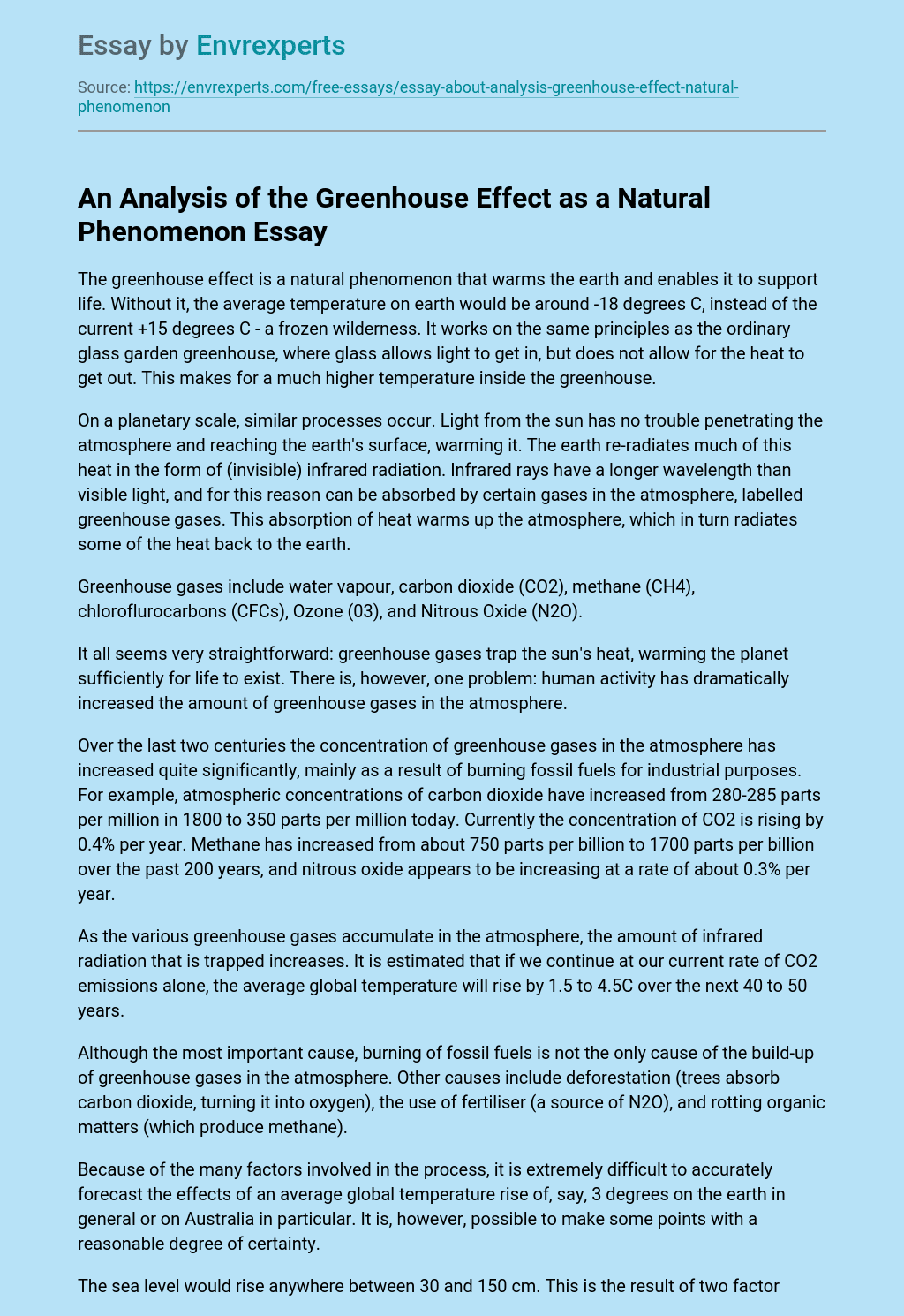