An Analysis of the Hetch Hetchy Valley Dam Controversy

Don’t waste time
Get a verified writer to help you with An Analysis of the Hetch Hetchy Valley Dam Controversy
Hire writer
$35.80 for a 2-page paper

Gifford Pinchot, founder of the National ForestService and close advisor to Theodore Roosevelt believed in "the greatest good for the mostpeople.”Leading the preservation of the dam, John Muir discovered the Hetch Hetchy valley in 1871 and become very attached to everything about Hetch Hetchy Valley. Then in 1890, Hetch Hetchy Valley was dedicated as a part of the land set aside as Yosemite National Park. Few people ever saw Hetch Hetchy because you had to hike deep into the park and there were no trails.

In addition, parts of the Hetch Hetchy Valley floor flooded as the snow melted. Therefore, it was this runoff water from the melting of the snow that the city of San Francisco wanted to useas a water supply, but this would mean building a dam and flooding the entire valley permanently. This became the question: "Should the United States preserve Hetch Hetchy or should it license the use of the water” (The Hetch Hetchy Dam Controversy: An Introduction)?

On the other hand, one of the most significant supporters of the dam was Gifford Pinchotwho had favored the building of a dam. Pinchot was a conservationist who believed in "thegreatest good for the most people.” Back in the 1920s, Pinchot believed that the city of San Francisco needed a new and adequate water supply because the city had outgrown it during thelast 50 years. "The situation in San Francisco now is that there are many homes where sufficientwater cannot be had for a bath; where it is necessary in the new and growing portions of the city to leave a spigot turned on at night in order to get sufficient water for the morning breakfast"(The Hetch Hetchy Valley Controversy: An Introduction).

Therefore, Gifford Pinchot saw everyreason to build a dam on Hetch Hetchy Valley especially because the people of San Francisco could have a larger supply of water than they already had.In 1913 the Raker Bill passed, authorizing the flooding of Hetch Hetchy. Then ten years later, the dam was completed and the people of San Francisco were provided with a new and adequate water supply. “In the decades since the Hetch Hetchy controversy the United States has followed a policy which, with numerous inconsistencies, has combined the Muir and Pinchot perspectives” (The Hetch Hetchy Controversy: An Introduction). Even though the dam wascompleted in 1923, there are still some areas that are to be left undeveloped and regulated. In theend, the main arguments made by John Muir and Gifford Pinchot will never be forgotten.If I were to travel back in time to 1920s right in the middle of the Hetch Hetchy Damcontroversy I would bring with me a whole new outlook. I would bring with me a social ecologyethic, an ethic that didn't exist during the early controversy between Muir and Pinchot over thedamming of Hetch Hetchy Valley. With all that being said, if I was to travel back to the 1920s during the middle of the Hetch Hetchy Dam controversy I would work together to solve all the environmental problems, that had the potential to stimulate social conflict in order to move forward.According to the University of California – Irvine's School of Social Ecology, socialecology is defined as, "the interactions within the social, institutional, and cultural contexts of people-environment relations that make up well-being.”

So in my opinion, in order to solve the controversy of whether to build a dam for “the greater good for the most people” or to not build a dam to protect Hetch Hetchy Valley from human exploitation the answer is now very clear because of the social ecology perspective.I believe that the controversy to preserve or conserve Hetch Hetchy Valley could be solved through social ecology. The need to dam up Hetch Hetchy would be removed because I feel as if deep ecologists are pointing to the wrong target. According to the book, Environment and Society by Paul Robbins, John Hintz, and Sarah A. Moore, “society's root problems are not matters of misguided ethics, bogus ideas, or ecological naiveté. Rather, our ecological ills are social in tradition” (76). More importantly, I cannot help but to look at the fact that the domination and exploitation of nature is unavoidable in a society that is focused on socialhierarchies, domination, and the exploitation of other humans. In addition, it is noted, "until anegalitarian, just society is established, people have no hope of ceasing environmental destruction, no matter what ethical lens people use to view nature” (76). Either way the damming of Hetch Hetchy Valley is viewed there is no way to stop environmental destruction no matter how youview nature.In conclusion, back in the 1920s, John Muir looked to protect Hetch Hetchy Valley from human exploitation at all costs, while Gifford Pinchot believed in the greatest good for the most people.” Then in 1913 the Raker Bill passed, authorizing the flooding of Hetch Hetchy and tenyears later, the dam was completed and the people San Francisco were provided with a new andadequate water supply. Looking into the past, if I was I asked to go back and change this ruling to build a dam on Hetch Hetchy Valley I would view it completely different because instead of viewing the damming of Hetch Hetchy Valley form the preservation and conservation ethic Iwould view this issue from the social ecology perspective. I believe that this problem could besolved through social ecology and the need to dam up Hetch Hetchy would be removed because deep ecologists are pointing to the wrong target. Environmental destruction, either natural or man-made, will never be stopped completely.

An Analysis of the Hetch Hetchy Valley Dam Controversy. (2021, Oct 31). Retrieved from http://envrexperts.com/free-essays/essay-about-analysis-hetch-hetchy-valley-dam-controversy 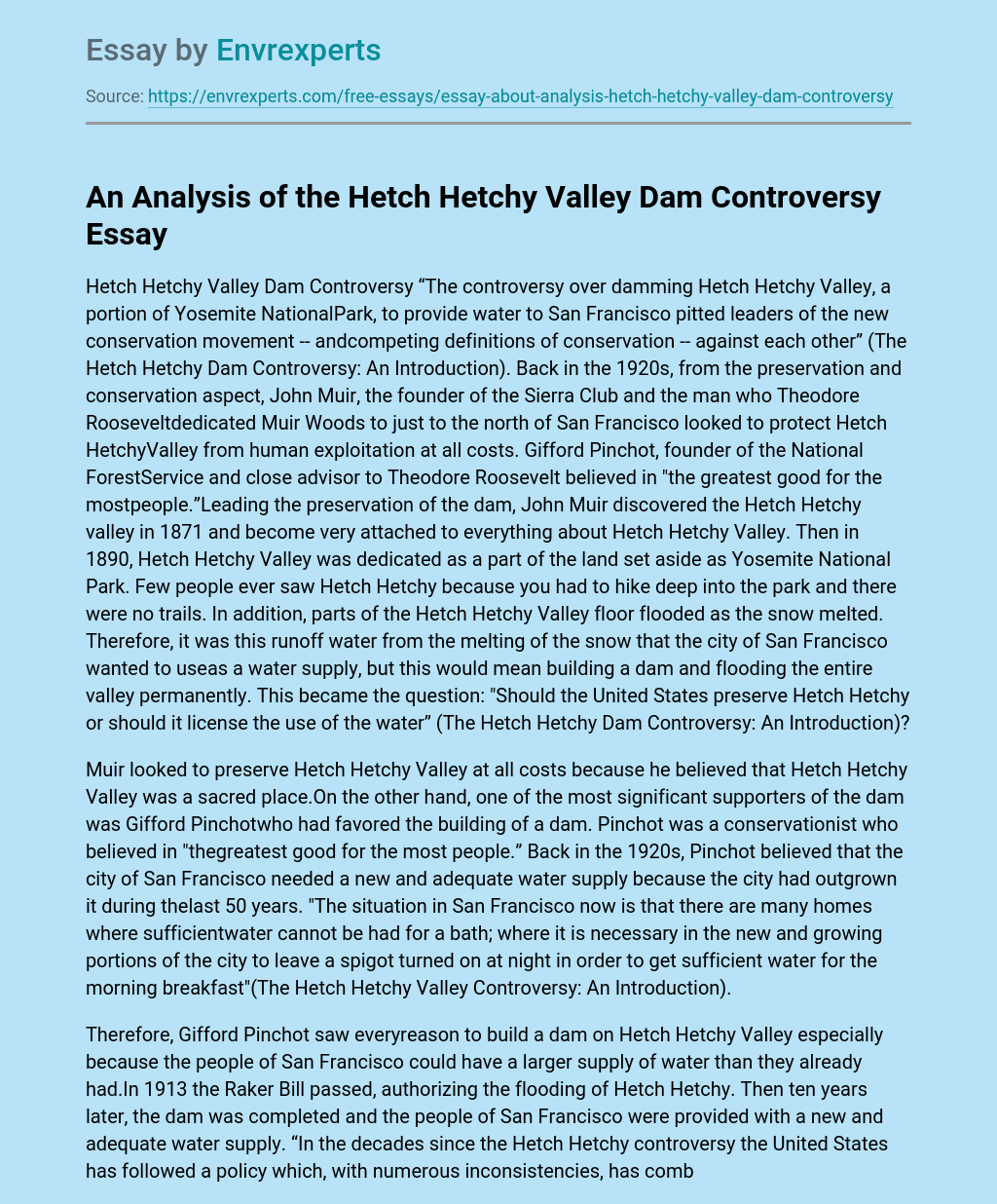