Radios. Phones. Computers. During a span of many centuries, technological advanceshave grown exponentially. Today, we live in a world incredibly reliant on technology andcomputers, because of everyday usage of technology, we cannot image a world withoutphones or computers. Despite the extraordinary expansion for human welfare, the rise oftechnology has led to a steady increase of pollution, and through pollution, global warmingsince hundreds of years ago. Since a vast number of things contribute to pollution, and inrecent years, due to increase in pollution, a question sparked for me, in concern for thepresent, in addition to the further generations – how have and how are technological advancesin the United States helping to reduce and prevent pollution and global warming? Throughresearch, I found it astonishing that while technology growth holds a huge burden onnegatively impacting our environment, we use technology to help rid and decrease pollutionrates around the world, particularly in the United States.

Don’t waste time
Get a verified writer to help you with An Analysis of the Impact of Technology on Pollution and Global Warming
Hire writer
$35.80 for a 2-page paper

As my research involved forms of technological advances that helped to reducepollution and global warming around the world, one of the sub-topics involved what, first,causes pollution and the major factors that make it as harmful as it is to the environment andto humans.

Since I already know that excess of carbon dioxide is the primary source of globalwarming, and that global warming is directly related to pollution, I knew that what causedglobal warming would also cause pollution. In order to find what the factor and causes are ofpollution and what they do specifically to the climate, I searched online for a climatologistwhose area of expertise would be artificial climate changes as well as natural climatechanges.

On the website of the University of Minnesota, I found Dr. Mark Seeley, who was aclimatologist and professor at the University of Minnesota. As a credible source ofinformation for my research, I composed a business letter requesting informative answers tomy questions. One question, specifically, dealt with electricity which I found difficult toresearch online, it was: how does the usage of electricity correspond to the addition of pollution in the air?In addition to directly sending a business letter to a professional, I foundanswers to my various questions through other means.Though a very broad topic, through various sources, from periodicals to websites, Ihave found numerous answers regarding the usage of technology to eliminate and reducepollution and global warming in our world. In order to find answers to a main question withsuch an expansive topic, I came up with many specific questions to find answers that wouldencompass the answers to the main question. These questions included each different type ofpollution: air, soil, radioactive, thermal, light, and noise pollution, and how each could bereduced. Further questions included which were the most efficient in reducing pollution interms of speed, and which were the most cost effective; after all, pollution is a global issue,and monetary issues are always present. Another issue at hand was what measures were takento reduce the output of pollution in everyday technology. To find this information, I firstlooked at the most reliable sources; government sources.

Online, I found the EPA, or theUnited States Environmental Protection Agency. This website provided me with what exactlypollution was defined as, in addition to the impact technology had toward pollution andglobal warming the past few decades. On average, according to the Pollution Timeline by theProQuest staff, 30 years created an of average of 60% pollutant decrease of various chemicalsin the air, such as carbon dioxide, nitrogen dioxide, ozone, sulfur dioxide, etc. I also foundthat today, many vehicles manufactured and their fuel output are environmentally lesshazardous by 90% since the last few decades! From these statistics, it really shocked me howamazing science and technology impacted our world for the better. Apart from looking atprevious years, however, according to Andrew Farmer in his book, “ManagingEnvironmental Pollution, toward the future, I found that nanotechnology is in development;that is, the dealing with matter at an atomic level. Scientists say that it seems to hold promise,especially in the area of water purification. Throughout the research process, I found it difficult to understand the hundreds of ways humans have come up to battle environmentalharm, due to the complexity of solutions. However, it was astonishing and quite relieving thatas a world and country, best efforts are continually going on for the preservation of the air,water, ground, and human health.Through many reliable databases, particularly Pollution Control by Michael Allaby, Ifound that there were many forms of technological ways pollution was reduced; not only inthe area of air pollution, but water, thermal, light, ground pollution as well.

Though I foundvarious means of general ways to reduce the distribution of pollution through the air andwater, I wanted to know if there were any significant technological machines that would helpin environmental protection: first, specifically for air and ground pollution and their variousgaseous emissions within their area. Generally, common pollutants are disposed throughmeans of refuse disposal systems- sanitary landfills, sedimentary tanks, E.C.S. inautomobiles, and electrostatic precipitation. Roy Harrison, author of Pollution: Causes,Effects, Control, says that in each field of pollution, a specific treatment is available, knownas waste water treatment, solid-waste treatment, and hazardous waste treatment. In each ofthose treatments, commons devices used in gaseous emissions, were scrubbers, condensers,devices for flaring, and devices for incineration. Since only the most efficient and costefficient are used today, scrubbers and condensers were found to be most commonly used forgas. Scrubbers, which remove gas pollutants, and are usually spray towers, use adsorption,and neutralize harmful pollutants in the air. Various types of scrubbers include wet scrubbers,dry scrubbers, and mercury removal scrubbers. Scrubbers have three basic configurations,which are gas humidification, gas liquid contact, and gas-liquid separation. Condensers, onlyused for gaseous emissions, operate by either the increasing pressure or the decreasingtemperature of the gas stream. Despite the expense of scrubbers and condensers, due to the astounding technological advances, the future of pollution reduction is extraordinary and canbe reduced to the point in which pollution can be virtually non-existent.Arguably, air pollution is the most worrisome area of pollution within the UnitedStates, due to the fact that it has the potential to change the climate dramatically, in additionto being the most direct way to impose health issues that it may cause.

Though scrubbers andcondensers may be used to clean toxicity in the air, Pollution Control by Science in Contextgave me information on more dust collectors also are commonly used to collect dust andimpurities in the gas/air to enhance the quality of air. Various types of dust collectors exist;inertial separators, fabric filters, unit collectors, electrostatic precipitators and manyothers. All of these can be used not only to clean out the air, but to recoveruseful, valuablepowder solids in the air and remove granular solid pollutants from gases.Firstly, inertialseparators can be defined assettling chambers, baffle chambers, or centrifugal collectors. Whateach inertial separator does, is obvious in their names. Settling chambers use a large box andreduce speed through a cross-sectional area, and only heavier particles settle out, while inbaffle chambers, baffle plates are used to cause gas streams to change direction into dead airspace, in which particles are collected. Interestingly, centrifugal collectors, however, usecentrifugal force to cause a cyclone within the device to separate different particles. Manytypes exist to repel pollution, because each can be used and are better in certain conditions.Fabric filters are somewhat similar to other collectors. They use filtration to separateparticles, which is one of the most efficient ways, therefore, one of the most common. Somemethods of filtration include shaking, reverse air, pulse jet, sonic, and cartridge collecting. Onthe other hand, electrostatic precipitators are very different than other dust collectors, in thatthey use voltage that is placed in a D.C. or direct current. With these many and more beingdeveloped of technological devices and methods, air pollution is undoubtedly being well controlled in every area of the United States government EPA, the Environmental ProtectionAgency.Despite technological growth in fields that continue to add to the total pollution in theU.S., such as factories and motor vehicles, technology is also continuing to allow foramazingadvanceswithout harming the environment significantly.

This research was fascinating tolearn of, every different method and design of controlling worldwide problems costeffectively. With the United States Environmental Protection Agency, pollution acts, andindividuals caring for the environment, statistics show that pollution rates in the U.S. havegone down at least 50% in each area of pollution and pollutants in the past couple of decades.Even with the methods of inertial separators, fabric filters, scrubbers, condensers,electrostatic precipitators, unit collectors, etc.,the future technology of pollution control indevelopment is continuing to grow, and while Ilook forward, I can only see pollution ratesdecreasing further at this stage of technology.

An Analysis of the Impact of Technology on Pollution and Global Warming. (2021, Oct 31). Retrieved from http://envrexperts.com/free-essays/essay-about-analysis-impact-technology-pollution-and-global-warming 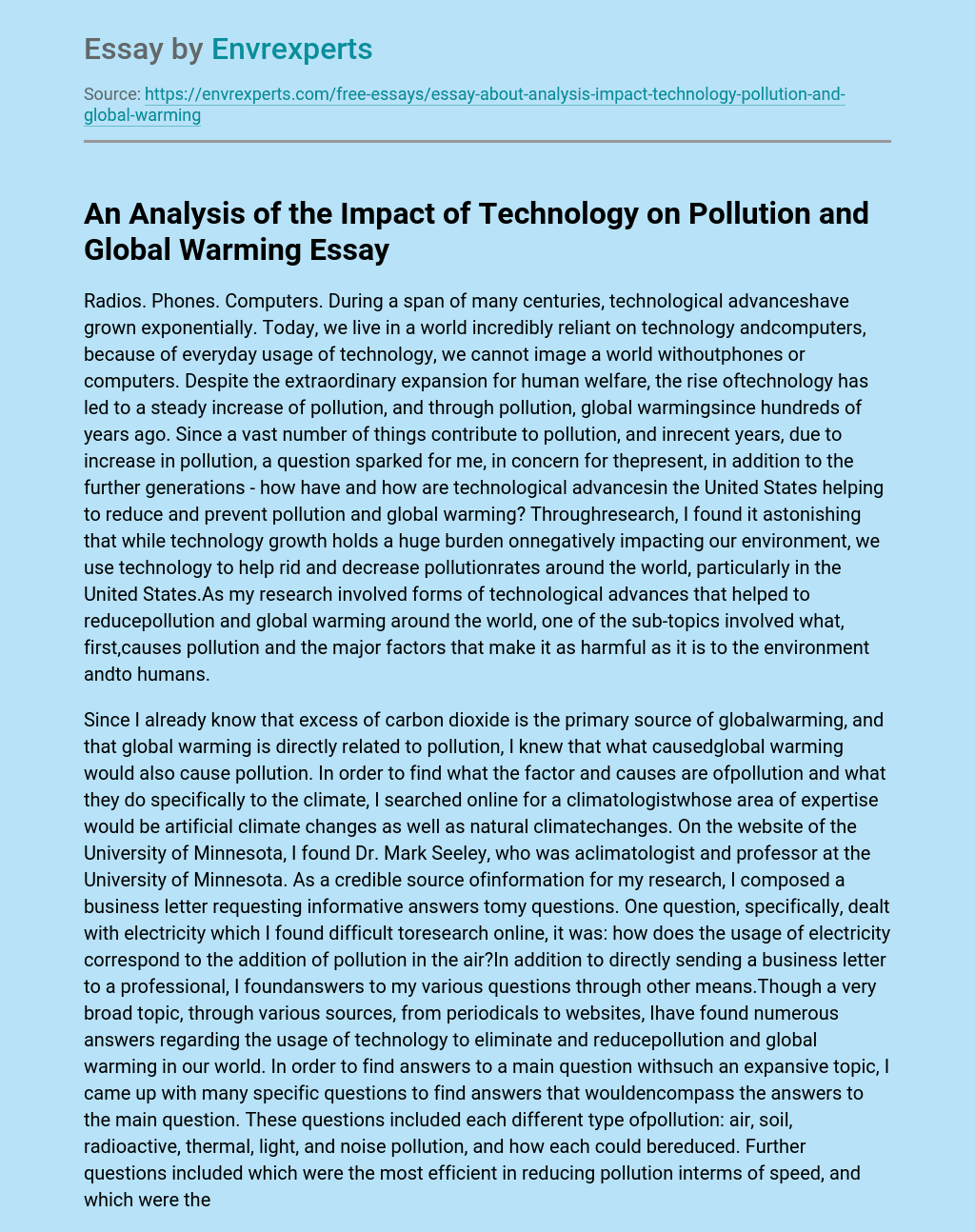