An Analysis of Pollution Problems in North America

Pollution Since the beginning of the 20th century, environmentalists have been warning the world about polluting the earth and its consequences. While many countries have seriously attempted to reduce their pollution emission, others instead seem to be more concern about economic growth and production output. Therefore, pollution has been increasing since then. However, pollution must be reduced, otherwise life on earth will soon extinguish. Air pollution is one of the biggest pollution problems. Cars and factories burning fossil fuels (oil, coal, and natural gas) are killing almost sixty thousand Americans, which represent about three percent of all American deaths each year, according to researchers at Harvard University (Pollution 27).

Don’t waste time
Get a verified writer to help you with An Analysis of Pollution Problems in North America
Hire writer
$35.80 for a 2-page paper

Particles that are smaller than five micrometers can get into your bronchial tubes, and particles smaller than two and a half micrometers can get deep into your lungs, affecting the exchange of gases between the air and your blood stream, and the oxygen moving in and carbon moving out. About sixty percent of PM10 particles are between zero and two and a half micrometers (Pollution 28). When the diameter of the particle drops to 0.001 micrometer, the harm of these particles highly increases. These particles can get into your home, your car, everywhere, so you cannot be safe even at home. In a modern U.S. city, a hundred billion of these particles can be found in each cubic meter of air, all of them invisible. Therefore they may be the cause of much of the health damage. In 1995, a study of 552,138 adult Americans in 151 metropolitan areas showed that there is a clear relationship between particle air pollution and human deaths, even bigger than smoking. Air pollution is a very big problem in the United States. A large part of air pollution comes from cars. The Environmental Protection Agency says, "The most polluting activity an average person does everyday is drive their car."

Most people probably are not aware that they are polluting the environment. Maybe if everyone knew how serious this pollution problem is, they would find ways to reduce the pollution. Most pollution that is released by cars comes from the exhaust, mainly in the form of hydrocarbons. Hydrocarbons are organic compounds, a combination of two or more elements, which contain only carbon and hydrogen. Hydrocarbons are released when fuel in the engine burns partially. When hydrocarbons come in contact with sunlight they form ground level ozone. Ground level ozone is a major ingredient in the formation of smog. Ground level ozone is responsible for irritating eyes, damaging lungs, and it complicates respiratory problems. Hydrocarbons are not the only pollutants released through car exhaust. Two more pollutants released through car exhaust are carbon monoxide and nitrogen oxides. Carbon monoxide reduces the flow of oxygen to the bloodstream, and could harm people with heart disease. Nitrogen oxide is formed when a car engine gets hot. It contains chemicals that aid in the formation of ground level ozone as well as acid rain. Acid rain destroys the outsides of buildings, statues, etc. Acid rain can also contaminate drinking water, damage vegetation, and destroy sea life. These two pollutants are two of the most dangerous pollutants released through car exhaust. If these two pollutants were cut down just a little bit our planet would be a safer place to live. Carbon dioxide is another gas released through exhaust emissions. It isn't dangerous directly to humans, but it is considered to be a "green house gas." A "greenhouse gas" is a gas that is associated with global warming.

The problem of global warming, an increase in the average temperature on Earth, is getting worse. The Earth has warmed 0.3 to 0.6 degrees Celsius since the late 1800s, and, as Robert Watson, associate director for environment in the White House Office of Science and Technology, argues "if current trends continue, the global mean temperature will rise between two and seven degrees Fahrenheit in the year 2100" (15). Scientists believe that the cause is the greenhouse effect, the process of trapping heat in the Earth's atmosphere because of the presence of large amounts of carbon dioxide, chlorofluorocarbons, methane, and nitrogen oxides. Less oxygen is being produced and cleaning the atmosphere allowing more of these gases to do its work on the environment. Automobiles exhausts are just one of the contributors to this problem. The burning of fossil fuels is another major influence to the increase in global temperature as well. The destruction of the rainforests and all forests and trees in general, is another. Every car produces enough gases from its exhaust into the atmosphere that takes a mature tree to clean in about five years. Trees keep the air clean for the environment by taking the gases in and produces oxygen out of it. By cutting down the trees we are allowing for more of the carbon to be exposed into the atmosphere. Another factor that most people would not consider in the raising of global warming is the excrement of cows. Cows produces tons of carbon that does not all get treated for, and is in the top five for highest amounts of carbon produced per year. This is another factor that somehow has to be dealt with.

All of these causes of global warming have been know by scientists, it's the effects we are seeing in today's climate now they had no idea of. Arctic glaciers are melting and causing the ocean's water level to rise. It has be proven that if the water level were to rise anymore then we won't be able to see the state of Louisiana anymore or any coastal areas anywhere. Louisiana is already having their wetlands filled by the floods. The polar bear is another example of the effects of global warming. Its habitat is decreasing and so are its numbers. Global warming affects the polar bear by melting the arctic snow and allowing it to starve longer then it usually does. The polar bear leaves off its fat for about 2-3 months and global warming will increase this time. Other effects will be increased weather storms both in summer and winter as a hot summer produces a lot of precipitation in the air and thus gives extreme winters and storms. The worst is yet to come in this problem of global warming. If the carbon gases are not somehow stopped the greenhouse effect will get worse and global warming will increase. The scary thing about this all is that we are not yet trying to stop them. Another big problem is that certain gases, such as carbon dioxide, methane, and ozone allow radiation from the sun to break through the atmosphere and go to the earth's surface. Global warming affects all living things on the entire planet. Another type of hydrocarbon pollutant occurs through fuel evaporation. These hydrocarbon pollutants are produced four different ways.

The first way is called diurnal. This is when the venting of gasoline vapors occurs due to the temperature of the car's engine rising. The second way is running losses. This is the venting of gasoline when the car's engine is running. The third way is called hot soak. Hot soak occurs when gasoline evaporates after the car has been turned off. The fourth way additional hydrocarbons are released occurs when a person is refueling a car. This occurs when a person fills up their gas tank. While the tank is being filled, gasoline vapors are forced out. One way to cut down on this type of pollution is to have the car tuned properly. The refueling problem can be reduced with the use of vapor recovery system. This system traps the vapor inside the tank. These systems are present at many gas stations in highly polluted areas. Some cities around the world are very dangerous to live in because of car pollution. One city is Athens, Greece. In Athens the number of deaths rises on days with greater air pollution. Just breathing the air in Bombay is the same as smoking half a pack of cigarettes a day. Over 150 million people in the United States live in areas where the Environmental Protection Agency considers the air to be unhealthy.

The American Lung Association says, "The unhealthy air leads to 120, 000 deaths every year". The citizens of earth are killing themselves. They are killing themselves for convenience. Even though the actions taken by the government and car manufacturers have reduced car emissions a lot since 1970, the number of miles an average person travels in a day has doubled. The average person must find a way to reduce the number of miles he or she drives. One way to do this is to carpool. If a large number of people started to car pool, pollution produced by cars would be reduced. This would reduce the amount of smog in urban areas, making these polluted areas a better place to live. There are many other alternatives to reduce car emissions besides carpooling. One possible solution is to use fuels cleaner than gasoline. There are many types of alternative fuels that could be used, and the number of fuels increases as technology becomes more advanced. One type of alternative fuel is alcohol. One type of alcohol is methanol. Methanol is made from natural gas and coal. Another type of alcohol is ethanol. Ethanol is produced from grains or sugar. Cars fueled by alcohol could produce as much as 80 to 90 percent fewer emissions than cars fueled with gasoline. Both methanol and ethanol are high-octane liquid fuels.

The reason why these two fuels are possible alternatives is because they are efficient and made from natural ingredients, and they pollute less. Another alternative fuel is electricity. This isn't a very efficient fuel right now, because the technology is limited. Recent advances in the production of electric cars could make this a reality in the future. It is possible for cars powered with electricity to release little or no emissions. If this alternative fuel becomes a reality and is used in most cars, it will knock a big chunk out of the pollution problem all around the world. Another alternative fuel is natural gas. Natural gas is only good for cars where driving long distances isn't important. It is possible for natural gas to produce 85 percent to 95 percent less emissions than gasoline-fueled cars. With this alternative fuel car emissions could be reduced a great deal to benefit the entire world. Another way to reduce pollution released by gasoline-powered cars is to test them for dangerous amounts of pollutants regularly.

Emissions testing programs are already in effect in California, Arizona, and Colorado. Texas will have an emission-testing program soon. The test is very simple. A car is tested for hydrocarbons and other ground level ozone forming chemicals that are released through car exhaust. If the level of pollutants is high, the car fails the test. Then the car must be taken to a mechanic, so the engine can be tuned to release fewer chemicals into the air. After the car is taken to a mechanic and repaired, the car is tested again. This test does cost the car owner money, but it's a small price to pay for the reduction of pollutants released by cars.

An Analysis of Pollution Problems in North America. (2021, Oct 31). Retrieved from http://envrexperts.com/free-essays/essay-about-analysis-pollution-problems-north-america 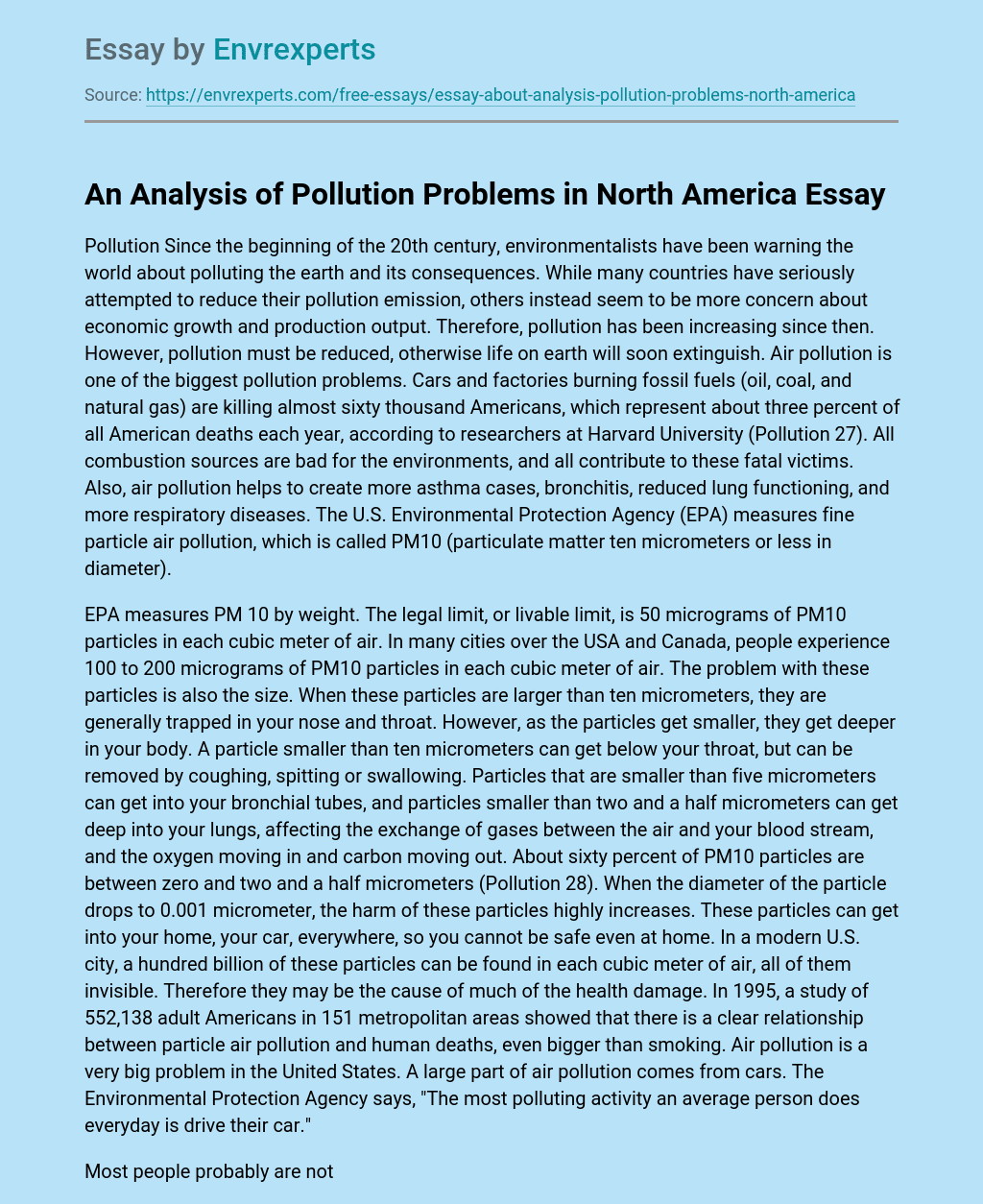