An Analysis of the Principles of the Hydroelectric Power

The idea of electricity started around 500 B.C. as the Greek philosopher Thales experimented with amber, a fossilized tree sap, by rubbing it and observing that it starts to attract certain types of materials, this is the first documented study of static electricity. In 1646 the term electricity was coined by Walter Charlton to describe the attraction of the different materials. Throughout the 1700's many advancements in the study of electricity were made to include the idea of ferrous and non ferrous elements, the storage of an electrical charge is successful, and in 1794 the first battery was successfully used, up till this time the only forms of electricity was static.

Don’t waste time
Get a verified writer to help you with An Analysis of the Principles of the Hydroelectric Power
Hire writer
$35.80 for a 2-page paper

1880 the Grand Rapids Electric Light and Power Company use a dynamo, belted to a water turbine to power 16 brush arc lamps to light the Wolverine Chair Factory, 1881 saw the use of hydropower to generate electricity to power the streetlights in the city of Niagara Falls.

The next Five years saw the growth of 45 water-powered electric plants in the United States and Canada. The first hydropower plant in the west opened in San Bernardino, Ca.

, in 1887, by the end of 1889 there were some 200 water-powered plants in the United States, from 1907-1920 the total of all electricity being produced by hydro-plants grew from 15% to 25% total production. With quick growth of hydropowered plants, the Government set the Federal Powers Act this set in place the Federal Powers Commission authority to issue licenses for hydro development on public lands. 1937 saw the first Federal dam start operations on the Columbia River, 1937 40% of all power being generated is by the use of hydro-plants. Over the next sixty-three years the use of hydro powered plants drop to just 10% of total electric production in the United States. With the new restrictions on the environment and cost of fossil fuels new ventures into the use of hydro-powered plants are being looked at. The following are types of hydro-plants and how they work.
Impoundment

An impoundment facility, typically a large hydropower system, uses a dam to store river water in a reservoir. The water may be released either to meet changing electricity needs or to maintain a constant reservoir level. Diversion A diversion, sometimes called run-of-river, facility channels a portion of
A river through a canal or penstock. It may not require the use of a dam.

When the demand for electricity is low, a pumped storage facility stores energy by pumping water from a lower reservoir to an upper reservoir.
During periods of high electrical demand, the water is released back to the lower reservoir to generate electricity. After looking at the types of power productions there are different sizes of plants in relationship to the type of power consumed, Facilities range in size from large power plants that supply many consumers with electricity to small and micro plants that individuals operate for their own energy needs or to sell power to utilities.

Although definitions vary, DOE defines large hydropower as facilities that have a capacity of more than 30 megawatts.

Although definitions vary, DOE defines small hydropower as facilities that have a capacity of .01 to 30 megawatts.

A micro hydropower plant has a capacity of up to 100 kilowatts (0.1 megawatts)

There are many types of turbines used for hydropower, and they are chosen based on their particular application and the height of standing water-referred to as "head"-available to drive them. The turning part of the turbine is called the runner. The most common turbines are as follows: Pelton Turbine
A Pelton turbine has one or more jets of water impinging on the buckets of a runner that looks like a water wheel. The Pelton turbines are used for high-head sites (50 feet to 6,000 feet) and can be as large as 200 megawatts.

A Francis turbine has a runner with fixed vanes, usually nine or more. The water enters the turbine in a radial direction with respect to the shaft, and is discharged in an axial direction. Francis turbines will operate from 10 feet to 2,000 feet of head and can be as large as 800 megawatts.

A propeller has a runner with three to six fixed blades, like a boat Propeller. The water passes through the runner and drives the blades. Propeller turbines can operate from 10 feet to 300 feet of head and can be as large as 100 megawatts. A Kaplan turbine is a type of propeller turbine
in which the pitch of the blades can be changed to improve performance.

Current hydropower technology, while essentially emission-free, can have undesirable environmental effects, such as fish injury and mortality
from passage through turbines, as well as detrimental effects on the quality of downstream water. A variety of mitigation techniques are in use now and environmentally friendly turbines are under development.

The project below, The Tazimina project in Alaska, did not require a dam.

Impoundment hydropower – uses a dam to store water. Water may be released either to meet changing electricity needs or to maintain a constant water level.
The Hydrologic Cycle: Water constantly moves through a vast global cycle, in which it evaporates from lakes and oceans, forms clouds, precipitates as rain or snow, then flows back to the ocean. The energy of this water cycle, which is driven by the sun, it tapped most efficiently with hydropower.
Inside:

An Analysis of the Principles of the Hydroelectric Power. (2021, Oct 31). Retrieved from http://envrexperts.com/free-essays/essay-about-analysis-principles-hydroelectric-power 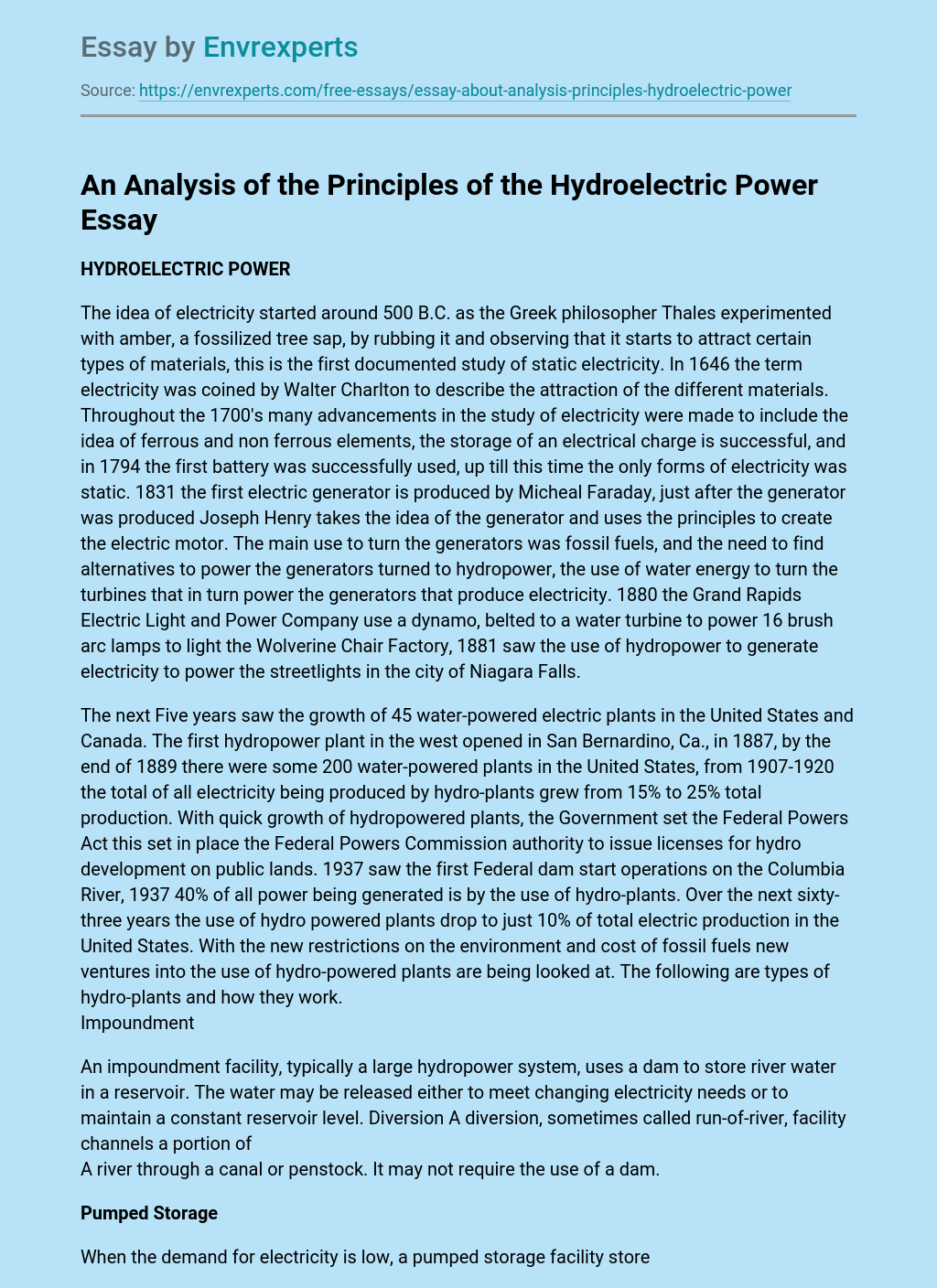