An Analysis of the Problem of the Destruction of the Rainforests

The destruction of the rainforests is happening at a great rate and must be stopped now. A delegate from U.S. Congress, Al Gore , says 1/ "The devastation of the rainforest is just unbelievable. It's one of the great tragedies of all history." Last year the smoke in Porto Velho, the capital of the Brazilian state of Rondonia, was so thick the airport had to be shut down. 2/ "An estimated 12,350 square miles of Brazilian rain forest an area larger than Belgium, was reduced to ashes.

Don’t waste time
Get a verified writer to help you with An Analysis of the Problem of the Destruction of the Rainforests
Hire writer
$35.80 for a 2-page paper

" The land after being burned is furtile for only three or four years. The settlers are poor and hard worked. They are destroying the forests and receive minimal benifit. After the settlers move out the land is taken over by ranchers. The land is hardly a good pasture and will never replenish itself. Loggers are cutting trees and spoiling streams. Dams are cutting off streams, flooding land, and disturbing the lives of natives.

In Peru the forests are being cleared for the production of coca for cocaine production. Tropical rainforests cover only seven percent of the earth. One of the large programss destroying the forest is Grande Carajas, which includes a giant mining complex, Polonoroiste, and a highway and settlement scheme. The process for iron-ore includes the need for charcoal, easily obtained by destroying the rain forest 1,27.

THE DESTRUCTION OF THE RAIN FOREST TREES

Close to half the rain forest's are already gone including those in India, Banglaedesh, Sri Lanka, and Haiti.

3/ "An estimated 15 percent of the rain forest have been cleared. At the currant rate the forests will be nothing but scrubby grasslands in 50 to 100 years." "It's dangerous to say the forest will disappear by a particular year," says Philip Fearnside of Brazil's National Insitute for Research in the Amazon, "but unless things change, the forest will disappear." 4/ The destruction of the rainforest would affect more than just South America. It would affect the whole earth. "If the forests disappear, so will more than 1 million species–a significant part of earth's biological diversity and genetic heritage." "Half of the earths biological diversity is harbored by the rainforests, according to some.5/ "The rainforest houses around 80 percent of the worlds insects.

Nine out of every ten primates (monkeys, gorillas, apes) live in rain forests. In a typical 4 square mile patch of rain forest there is an estimated 750 species of trees, 125 types of mammals, 100 types of reptiles, and 60 of amphibians. The number of insects in a single type of 3/ Booth, William. "Cutting Amazon's Forest Would Rock Climate-Study." Times Colonist , 132 year, no. 107 (March 30, 1990 4,5/ "Playing With Fire". Time, September 18, 198 9 pg. 62-63 tree would be about 400. Not only are the animals large in number, but also in size: lily pads three feet or more in diameter, butterflies with eight inch wing spans, and fish (Piracu) that grow to seven feet in length. 6/ "By the year 2000, 750,000 species of plants will be destroyed and many animal species will become extinct, unless we stop the destruction now." It is such a waste to see so many wonderful creatures and plants destroyed, but it does not end there. It effects us in more ways than one. As trees are cut down and the forest's are burned the plants are destroyed, many of which are used in medicine. A quarter of all medicine contains plant material found only in rain forests. Scientists feel there are a wealth of undiscovered chemicals and things to be learned from the forest. The forest creates a large cloud cover which would effect our temperature and climate. Because it generates such large amounts of cloud it has a great affect on global warmth. The trees are also a storehouse of carbon dioxide, which is released when burned. This will magnify the greenhouse effect. Others, such as the Indians and rubber tappers way of life is in danger. 6/ "Rainforest S.O.S." Nature Canada , summer, 1988, Pg. 1-4

There is a great challenge in trying to end the destruction of the rain forests. The Brazilians see foreign pressure as unjustified meddling by the industrialized nations to maintain their economic supremecy. "How can Brazil be expected to control its economic development, when it is staggering under a $111. billion dollar foreign-debt load? By what right does the U.S., which spews out more pollutants than any other nation, lecture poor countries like Brazil on their responsibility to mankind."7/ Some of the things being done for the forest include analyzation with supercomputers, pressure on involved governments, and benifit concerts. These things alone however, are not going to stop the destruction of the rainforests, and unless something is done, the forests will be destroyed. 7/ "Playing With Fire". Time , September 18, 1989 pg. 62-63

An Analysis of the Problem of the Destruction of the Rainforests. (2021, Oct 31). Retrieved from http://envrexperts.com/free-essays/essay-about-analysis-problem-destruction-rainforests 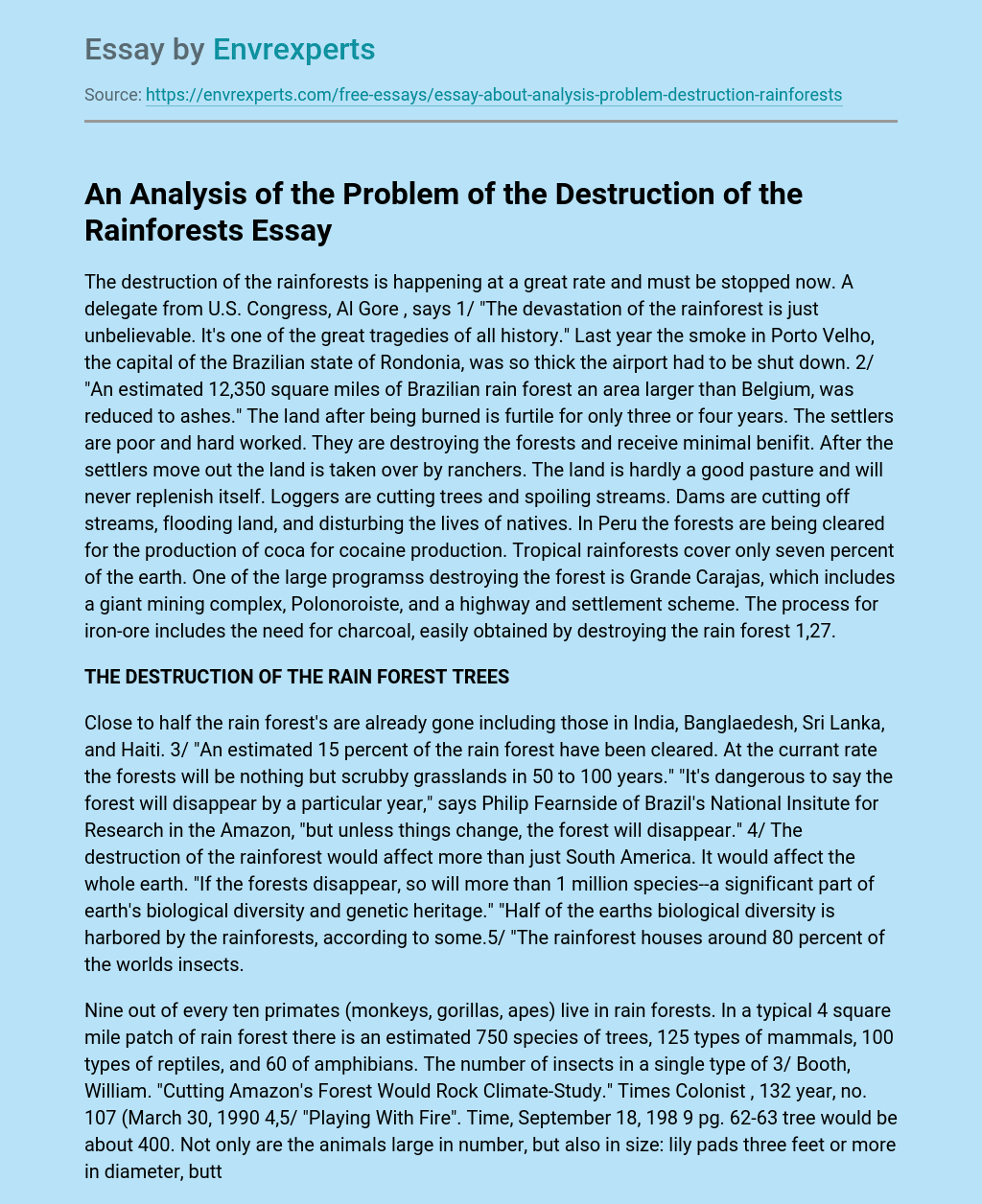