Acid Rain. It is a term that has been imbedded in us for many decades and yet still it is an issue today. It is a term that was coined in 1872 by Dr. Robert Angus Smith, an English chemist. (Mello 21). He noticed that the air in the cities contained many different contaminates including sulfuric acid, which he believed to be the cause of corroding metals and certain types of damage to plants. His colleagues ignored his studies and findings and it wasnt until 100 years later that scientists started to explore this serious problem.

Don’t waste time
Get a verified writer to help you with An Analysis of the Relation between Acid Rains and the Decline in the Red Spruce Population in Vermont and Northeastern Forests
Hire writer
$35.80 for a 2-page paper

Acid rain forms when nitrogen oxides and sulfur dioxide react with oxidants and moisture in the atmosphere to form nitric acid and sulfuric acid. These acids are made of hydrogen and nitrate or sulfate ions (Dept of Agriculture 8). These acids can reach the earth as precipitation in the form of rain, snow, sleet, hail, clouds, dew, and fog. It can also reach the earth as dry particles or gasses.

Many of these gaseous emissions and particles come from coal burning power plants and other industrial sources. Subsequently, in Northern New York and New England, there are few industrial areas, however the pollutants are carried hundreds of miles and deposited here by different weather patterns.

In the 1960s scientists began to notice a decline in the red spruce population in Vermont and other northeastern forests. The decline is much more apparent in higher elevations, or the boreal zone. The soil tends to be less nutrient rich at these elevations and the weather conditions tend to be significantly harsher than at lower elevations. This means that the trees in this area are exposed to a great deal more acid precipitation than others.

It is hard to pinpoint acid deposition as the leading cause of what is happening in the forests. Many factors contribute to how well a forest thrives including soil, climate, genetic makeup of the tree, and other biological factors. (US Dept of Agriculture 7) In fact, three natural enemies that threaten the tree population are fire, insects, and fungi. (Mello 11).

However, these problems were not detected as the cause of the decline and researchers began searching elsewhere for answers. Red Spruce trees thrive in inhospitable climate zones in the Northeast, often growing in pure stands at elevations exceeding 3,000 ft above sea level. Also, these trees are capable of surviving for 400 years. This is why when scientists began noticing the spruce struggling to survive they began to look into why a tree that could withstand so much are seemingly under attack. In 1982, Dr. Hubert W. Vogelmann, chairman of the Department of Botany at UVM, reported the red spruces were dying in the virgin forests on Camels Hump. This prompted extensive research into why this might be happening. Red Spruce live at high elevations and are capable of surviving in thin, rocky soil with an already high acidity. At the elevation in which they live there is not a lot of bedrock to absorb the additional acids deposited by the extreme weather conditions. In turn other nutrients are leached from the soil and this is a factor in the decline of the red spruce popula!
tion. As the red spruce die back and fall to the ground, this opens the canopy for sunlight to reach the ground and new species to form. Where red spruce seedlings may once have thrived, the sunlight allowing ferns and other ground plants to grow, competing with the seedlings for sunlight and nutrients. It was also noted that while the red spruce was experiencing reduced growth rates and reduced crown vigor, other species did not exhibit such dramatic changes. (The Effects 56)

A reason for the noticeable difference for the red spruce is mainly due to its elevation. They tend to be exposed to polluted precipitation much more consistently throughout a period of time. After a while this starts to reduce the trees tolerance for cold weather conditions that are associated with their habitat. This is referred to as winter injury. The trees weaken over time and eventually die back as it has been seen to do in Vermont.
You may ask what is being done to reduce emissions that cause acid deposition. In response to concern that was generated by scientists and perpetuated via the media, Congress passed and President Carter signed the Acid Precipitation Act of 1980. (The Effects 55). This led to the establishment of the FRP or the forest response program in 1985. Their main objective was to provide information that could be used to address three very broad questions related to the creation of environmental policy.

The research results were then given to the EPA policy makers, which prompted the development of Regional Research Cooperatives. This was the beginning of exploring the issues on a local and practical basis. Each cooperative reports results of research within their own areas and these results are given to the FRP. This gives them accurate and pertinent information about specific areas that need help. The next step was the introduction of The Clean Air Act. This act set a standard to be followed regarding harmful emissions from sources like coal-burning power plants. Presumably, the standards set would reduce the harmful effects of pollution. While sulfur emissions are down as a result, NO has stayed relatively the same. As of 1996, there were no federal standards for sulfate deposition in Vermont but Canada and New York have both proposed annual wet sulfate deposition standards of 20 kilograms per hectare to protect their waters and soils from further acid rain damage. (Vermont 2) Lower elevations of Vermont tend to meet these standards but as precipitation increases with elevation, wet sulfate deposition is estimated to exceed 40 kg/ha. (Vermont 2) This is a significant increase and the soils are not able to absorb and neutralize acidity at this level.

In Conclusion, there is no evidence of a general decline of forest tree species due to acid deposition. Only for high elevation forests of red spruce in the Northeast that are frequently exposed to highly acidic cloud water, is there evidence that acidic deposition may be a significant contributing factor to the decline of the population. Due to many different environmental factors including the natural cycle of the forest, it is extremely difficult for scientists to pinpoint pollution and acid deposition as the main cause of the forest health problems. In turn, it is increasingly more difficult to get the laws to protect the rights of our trees to grow healthily as well as the people to breathe clean air and drink water that is not contaminated.

An Analysis of the Relation between Acid Rains and the Decline in the Red Spruce Population in Vermont and Northeastern Forests. (2021, Oct 31). Retrieved from http://envrexperts.com/free-essays/essay-about-analysis-relation-between-acid-rains-and-decline-red-spruce-population-vermont-and-northeastern-fore 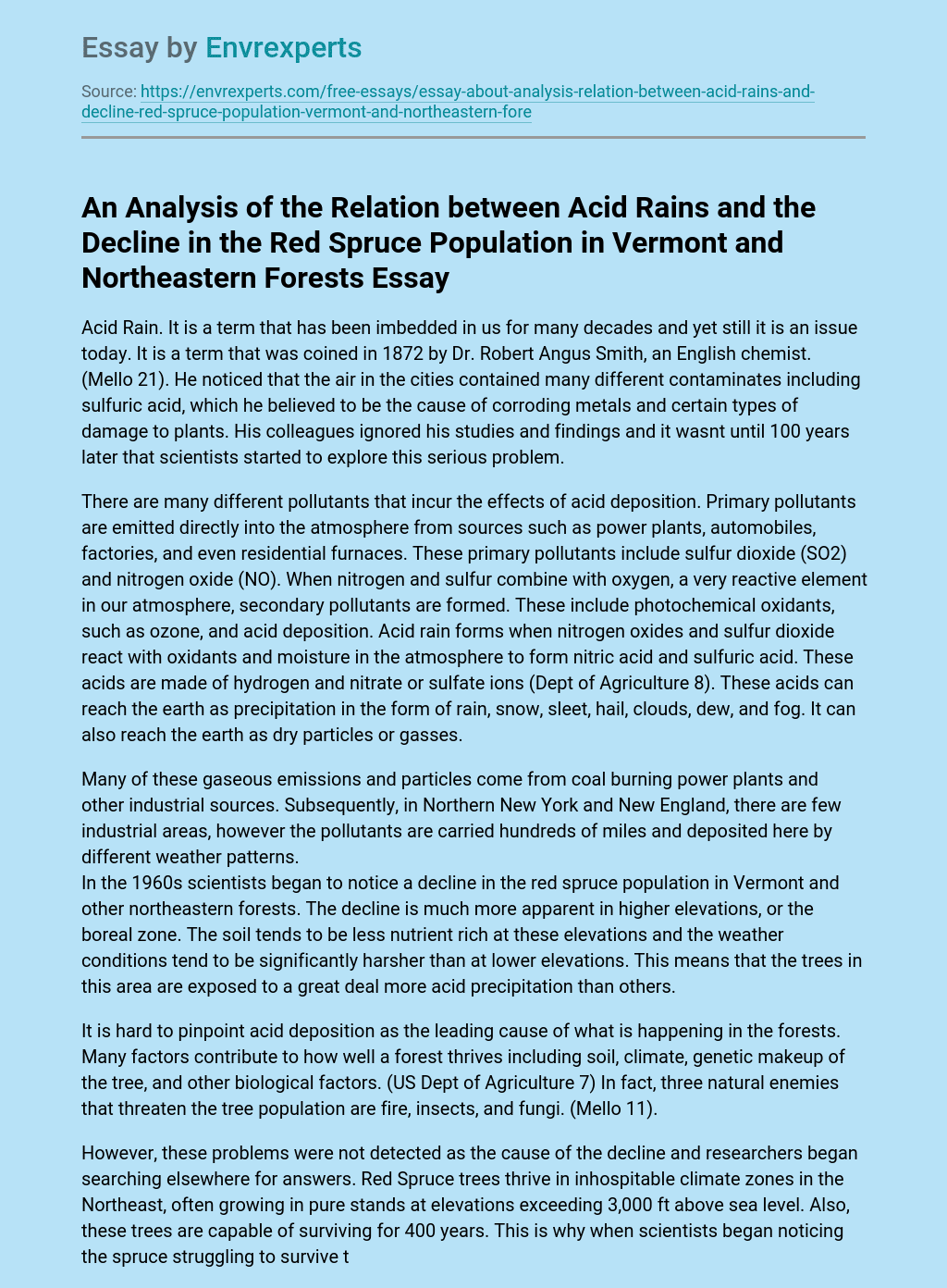