An Analysis of the Social, Environmental, and Economic Challenges in the Development of Cold Environments

Don’t waste time
Get a verified writer to help you with An Analysis of the Social, Environmental, and Economic Challenges in the Development of Cold Environments
Hire writer
$35.80 for a 2-page paper

One named example of development in cold environment presenting challenges is in Nepal, Annapurna. Annapurna is 10th highest peak in the world and so this draws in an average of 25,000 trekkers every year and brings in $1.6 billion to Nepal's economy, however the increase in tourist numbers also creates social, environmental and economic challenges in Nepal. A second named example of development in cold environment presenting challenges is in Alaska, where the drilling of oil created social environmental and economic challenges. The development of the trans-Alaskan pipeline began in 1977 and since then over 15 billion barrels have moved through the pipeline system. The pipeline also cost 8 billion dollars to build in 1977, which was the largest privately funded construction project at the time. One economic challenge that the increase in tourism has caused in Nepal is the increase of food prices due to an increase of food being imported into the area, therefore the prices for the local people have been steadily rising, putting villages that are not on the tourist trail at a huge disadvantage and could lead to locals being forced to move to a different area with less tourism so that they are able to afford food.

Many villages have now become more reliant on money rather than traditional forms of labour meaning that there has been a local decline in the amount of produce that is being grown, meaning that more produce will have to be imported, further increasing costs of food.

One social challenge that the increase in tourism has caused in Nepal is the traditional culture being lost. The increased level of tourism has dramatically increased the uptake of western fashion, devices and accessories and the trekkers that visit the region have introduced goods to the local population so much that the region's trekking sherpers are now beginning to wear imported boots and colourful jumpers rather than their traditional clothing, showing that the traditional culture has been lost due to tourism. A second social impact caused by the increase in tourism in Nepal is the rates of attendance in schools considerably dropping as many young people are attracted by the idea of becoming a guide for westerners over the Annapurna region, however this is not a definite prospect due to limited number of jobs and also may not be permanent, leaving young adults from Nepal unprepared, uneducated and under qualified to do an alternative job to farming. One social impact caused by the drilling of oil in Alaska is the increase in crime rate. As a result of the greater demand for goods and services, triggered by the higher demand for wages there has been an upsurge in crime and illicit activity, culminating with Fairbanks' Second Avenue becoming known as a hangout for prostitutes- This problem increased due to the fact that many police officers and state troopers have resigned to become highly-paid pipe line security guards, therefore the problems of crime cannot be controlled, making the Alaska a dangerous area to live. In summary development in cold environments causes loss of culture due to increase of imported goods and increase of crime due to inflated prices of goods and services.

One environmental challenge that the increase of tourism has caused in Nepal is the area being damaged by the thousands of people hiking through the area each year due to Annapurna being one of the 14th highest mountains in the world, attracting world class trekkers and mountain climbers, which can lead to knock on effects such as reduced biodiversity within the local food chain due to tourists not taking care of the area while they are there. The increased tourist numbers can also lead to footpath erosion creating visual pollution. The increased number of tourists will also create increased waste for the area putting stress on waste disposal which will cause pollution. One environmental challenge that oil drilling and the development of the trans Alaskan pipeline has caused in Alaska are oil spills. In March 2006 a 0.6m wide hold in an oil pipeline led to a 267000 gallon oil spill discharge over a 2 acre area, there have also been an average of 409 oil spills every year at Prudhoe bay, amounting to 1.3 million gallons of waste, including acid and crude oil. These hydrocarbons from the spill infiltrate into the soil and pose a severe risk to animal and plant life, for example diesel is particularly toxic to plant life. These spills have long lasting ecological damage and even after almost 30 years, much of the plant life in the area has yet to recover, and so biodiversity of plants and animals in the area is reduced. A second environmental challenge caused by the oil drilling and trans Alaskan pipeline development in Alaska is the increase in pollution. Nearly 60,000 tons of nitrogen oxide are emitted by the oil industry in Alaska every year (this is more than twice the level of Washington DC) leading to heavy smog and acid rain which have a detrimental effect on the plants and animals here, for example acid rain dissolves the nutrients and helpful minerals in the soil and then washes them away before trees and other plants can use them to grow. At the same time, acid rain causes the release of substances that are toxic to trees and plants, such as aluminium, into the soil and over time reduced biodiversity. The rapid growth of the industry in Alaska has led to construction of many new roads and other man made obstacles which have caused over 22,000 acres of tundra to be lost to the drilling industry, these obstacles interrupt with the caribou's migration pathway, causing a decrease in the density of caribou in the area which has a huge impact on other creatures in the ecosystem as the food chain will be drastically affected. In summary development in cold environments such as Alaska and Nepal increase pollution and therefore decrease the biodiversity of the wildlife found there.

In conclusion development of cold environments presents huge social, economic and environmental challenges to the area.

An Analysis of the Social, Environmental, and Economic Challenges in the Development of Cold Environments. (2021, Oct 31). Retrieved from http://envrexperts.com/free-essays/essay-about-analysis-social-environmental-and-economic-challenges-development-cold-environments 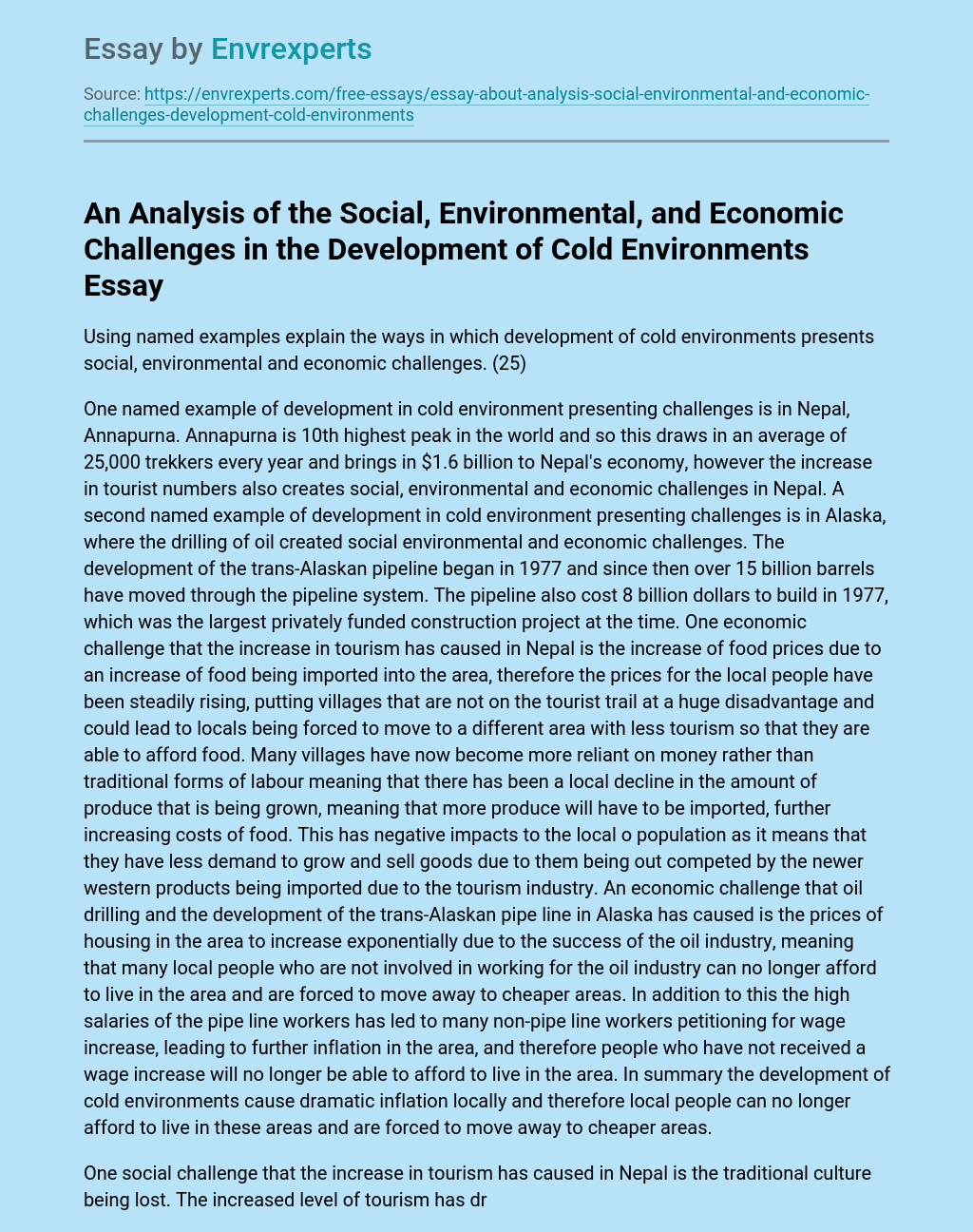