An Analysis of the Solutions for Reducing China's Pollution

China being the most polluted country in the world, is not a surprising news. However, the pollution issue is becoming worse than ever. According to BBC news, on Monday, December 7, 2015 Beijing government “has upgraded its alert for air pollution from orange to red, the most serious level” (“Beijing”). This is the first red alert of Chinese history after China’s several efforts to fight against pollution since 2013. Currently China’s pollution rate is 22 times those recommended by the World Health Orgnaization (“China Raises”).

Don’t waste time
Get a verified writer to help you with An Analysis of the Solutions for Reducing China’s Pollution
Hire writer
$35.80 for a 2-page paper

This is a signal that China’s effort in limiting pollution is not proficient. Moreover, Berkeley Earth, a research organization in California revealed that China’s air pollution “‘contributes to the deaths of an estimated 1.6 million people in China every year, or about 4,400 people a day” (Rollins). The pollution problem in China are causing serious health issues to its own country and solutions are needed to be made immediately.

Several health organizations have announced officially that pollution is a threat to human health. International Agency for Research on Cancer declared air pollution as carcinogenic to humans (Simon). Carcinogen is an agent directly involved in causing cancer. By officially declaring danger of pollution, it made pollution more important issue of concern. Due to the fact that a large number of people exposed to polluted air, it is important to keep that air clean to prevent cancer for china’s huge population.

Another problem caused by China’s air pollution is the city being filled with fog and misty air. Driving in the misty roads are dangerous, because people are more vulnerable for accidents occurring. In multiple areas in China, people cannot see any farther than 20 feet of distance (“China’s”). In fact, this inability to see has caused a huge car accident in China involving total of 48 cars on November of 2015 (Parkhurst). Many were injured and traffic was blocked for hours. This inability to see places drivers and street passengers in danger. On the same day, to prevent any more fog or mist, China’s government tried to limit pollution by banning car on the street and closing school; they were just temporary solution that did not actually solve the pollution issue.

One solution to this severe pollution issue in China is to attack China’s shipping industry. China known for being one of world’s producing country, hundreds of ships enter various parts of China’s port importing and exporting products from and to foreign countries. These ships are one of the major causes of pollution. Most ships are fueled diesel fuel causing just as much pollution as cars in the road. Experts suggest that ships should change its fuel to natural gas or less pollution creating energy source (Barboza). Although this change is very costly, in the long run, it will benefit world environment and would have less impact of economy. Beyond the change, China’s government should impose stronger regulation of laws within port, such as having ships conform emission requirements proposed by the government (“China Passes”). Through this technique, government will have accurate statistical data gathered and can come up with accurate stronger solution to equalize pollution and change.

Another solution is to attack china’s manufacturing industries or factories. Currently in China, there are nearly 2 million factories actively functioning (Mozur). No strict laws regulating pollution emission from these factories allowed them to overproduce products with inestimable amount of pollution everyday. China currently is paying its price for having less government regulation on economic issue for several years with high rate of pollution. Having a pollution standard for industries will limit this overproduction of products and overproduction of pollution (“China Passes”). Placing fees on industries will understand the tradeoffs of overly producing and begin to produce at social optimum. In addition to pollution standard, government should suggest firms to change their factory facility to more environmentally friendly supplies. Many factories produce with cheap high pollution creating facilities, and changing the machines will be very costly and not many will perform to do it. Therefore the government should propose low interest loans to those firms and encourage change in factories (“China Passes”).

China’s government has been imposing laws listed above for last few months. It did show some improvement but not as much. One reason behind this is because Chinese government is not proficient in their method of promoting the change. There are many loopholes into paying the required tax for pollution. Companies can change their reported data to lessen their taxes to the government (“Chinese”). To change this, government sent out officials to examine out how the policy is being enforced. Moreover this examination on the policy to limit pollution should be done regularly in order to keep reinforcing the change and being persistent. Another reason behind government hesitating to push companies and firms too hard on the issue is because the economy is based on factories and shipping. Government does have duty to provide healthy environment, but it also serves as “market for public trade companies” (“China’s”). Economy is just as important as environment; thus, the government should find an midpoint on taxes or policy for those two aspects of country to agree upon. Policy should not be favorable to the companies only but equally fair to the public citizen’s environment as well.

In conclusion, pollution is currently a huge problem in China. Not only it affects negatively towards health of its citizens, it places many in danger of deaths by lung cancer and car accidents. China’s government should be enforcing laws and restrictions on pollution emission in factories and shipping industries. Although it may hurt china’s economy, the deadly pollution is more concern than the short economic downfall. At this stage sacrificing immediate run economic prosperity will benefit environment and create more efficient economic growth in long run. The government should enforce laws through regular check on its local government about improving pollution standards. Today, people in other countries can help improve pollution in China. Companies like Google, Apple, Microsoft, Samsung, and Facebook have their company or factories located in China. Convincing them to take the first step of change is what people in the world can do to help improve China’s pollution.

An Analysis of the Solutions for Reducing China's Pollution. (2021, Oct 31). Retrieved from http://envrexperts.com/free-essays/essay-about-analysis-solutions-reducing-chinas-pollution 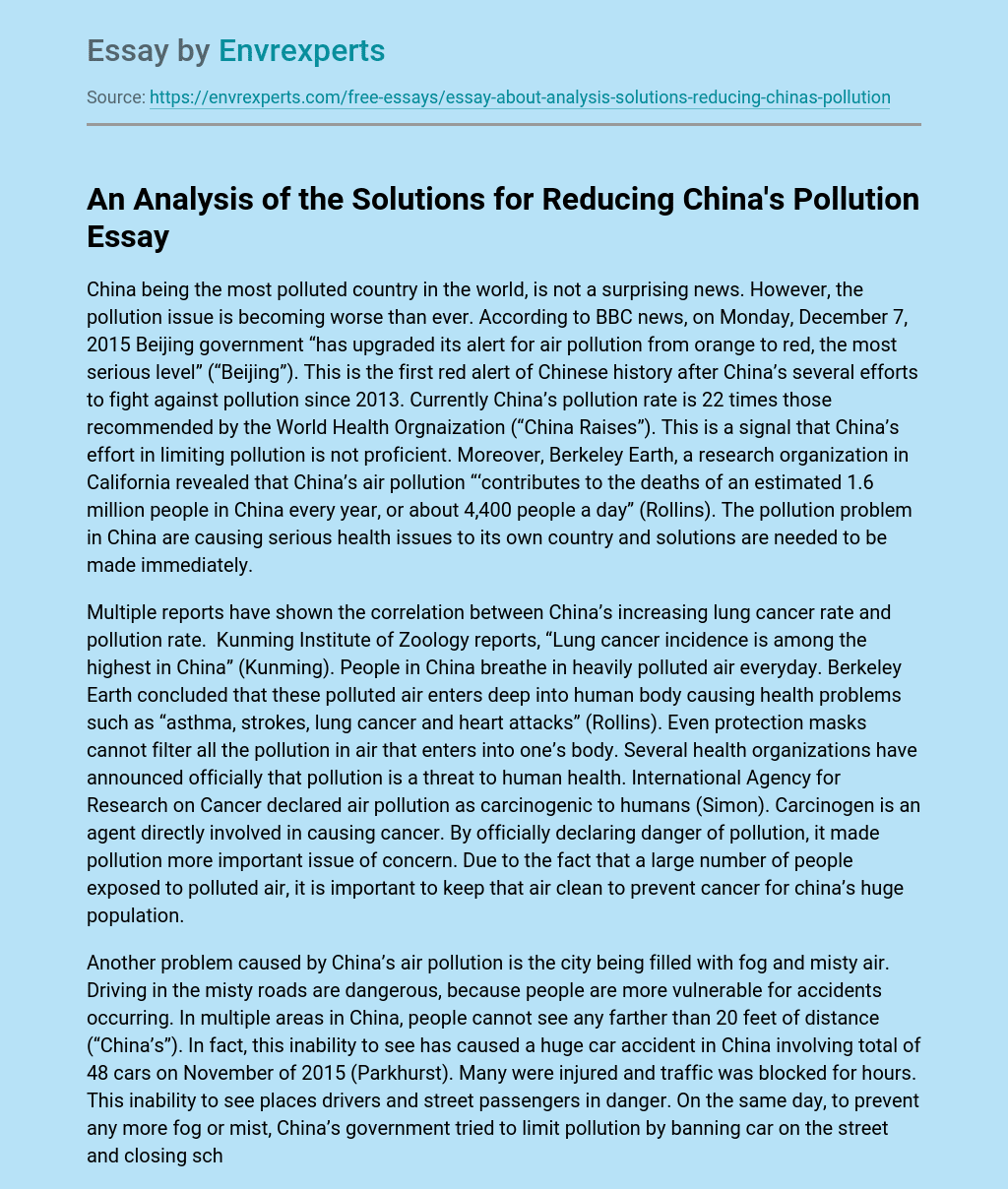