An Analysis of the Subject of Deforestation and the Effects

The subject of deforestation and the effects that it has on the environment have been heavily debated for a long time; particularly over the last few years. Governments and large lumber companies see large profits in the mass deforestation of forests and state that their actions are having few, if any, harmful effects on the environment. Most people disagree with this and think that the environmental effects are devastating and will become irreversibly disastrous in the very near future. Whether or not the pros outweigh the cons will be hotly debated for years to come but the fact is that deforestation is harmful to the environment and leads to declining wildlife populations, drastic changes in climate and loss of soil.

Don’t waste time
Get a verified writer to help you with An Analysis of the Subject of Deforestation and the Effects
Hire writer
$35.80 for a 2-page paper

The loss of forests means the loss of habitats for many species. Current statistics show that as many as 100 species become extinct every day with a large portion being attributed to deforestation (Delfgaauw, 1996). 'Edge effects' are the destruction or degradation of natural habitat that occur on the fringes of fragmented forests.

The effects for the animals include greater exposure to the elements (wind, rain etc…), other non-forest animals and humans (Dunbar, 1993). This unnatural extinction of species endangers the world's food supply, threatens many human resources and has profound implications for biological diversity.

Another negative environmental impact of deforestation is that it causes climate changes all over the world. As we learned in elementary school, plant life is essential to life on earth as it produces much of the oxygen that is required for humans and other organisms to breathe.

The massive destruction of trees negatively effects the quantity and quality of the air we breathe which has direct repercussions on the quantity and quality of life among both humans and animals alike. With this reduced amount of vital plant life comes the increase of carbon dioxide levels in the earth's atmosphere. With these increased levels of CO-2 come unnatural changes in weather patterns both locally and globally. 'The removal of forests would cause rainfall to decline more than 26%. The average temperature of soil will rise and a decline of 30% in the amount of moisture will evaporate into the atmosphere' (Delfgaauw, 1996). This leads to the global warming phenomenon which is also directly related to the declining amounts of forest areas on the earth.

Soil erosion caused by deforestation is also a major concern among even the most amateur environmentalists:

'When rain falls, some may sink to the ground, some may run off the
surface of the land, and flowing down towards the rivers and some may
evaporate. Running water is a major cause of soil erosion, and as the
forests are cut down, it increases erosion' (Delfgaauw, 1996).

Whether or not you are a radical environmentalist or just a regular citizen, the consequences of deforestation affect us all. Living in BC we don't have to drive very far to see land that has been clearcut or to see massive protests by people of all ages who want to 'save the forests' or 'save the environment'. It is evident that reforestation projects are underway and in many cases are quite successful. Millions of dollars are spent each year (provincially, nationally and internationally) on reforestation and many experts agree that this is helping provided that the time between harvest is long enough for the area to mature properly. The projections we hear through the media make the situation sound quite bleak but the fact is that private and public awareness have lead to a decreasing amount of deforestation activity (from what is projected) in many areas such as the Brazilian Amazon Basin (Dunbar, 1993). Forests are an important part of maintaining the earth's biological and ecological diversity as well as major factors in the economic well being of many areas. If we can maintain a balance between the two and continue the reforestation efforts, the negative environmental affects could be greatly reduced. Regardless, the negative environmental affects do exist and the severity of them will be debated for many years to come.

An Analysis of the Subject of Deforestation and the Effects. (2021, Oct 31). Retrieved from http://envrexperts.com/free-essays/essay-about-analysis-subject-deforestation-and-effects 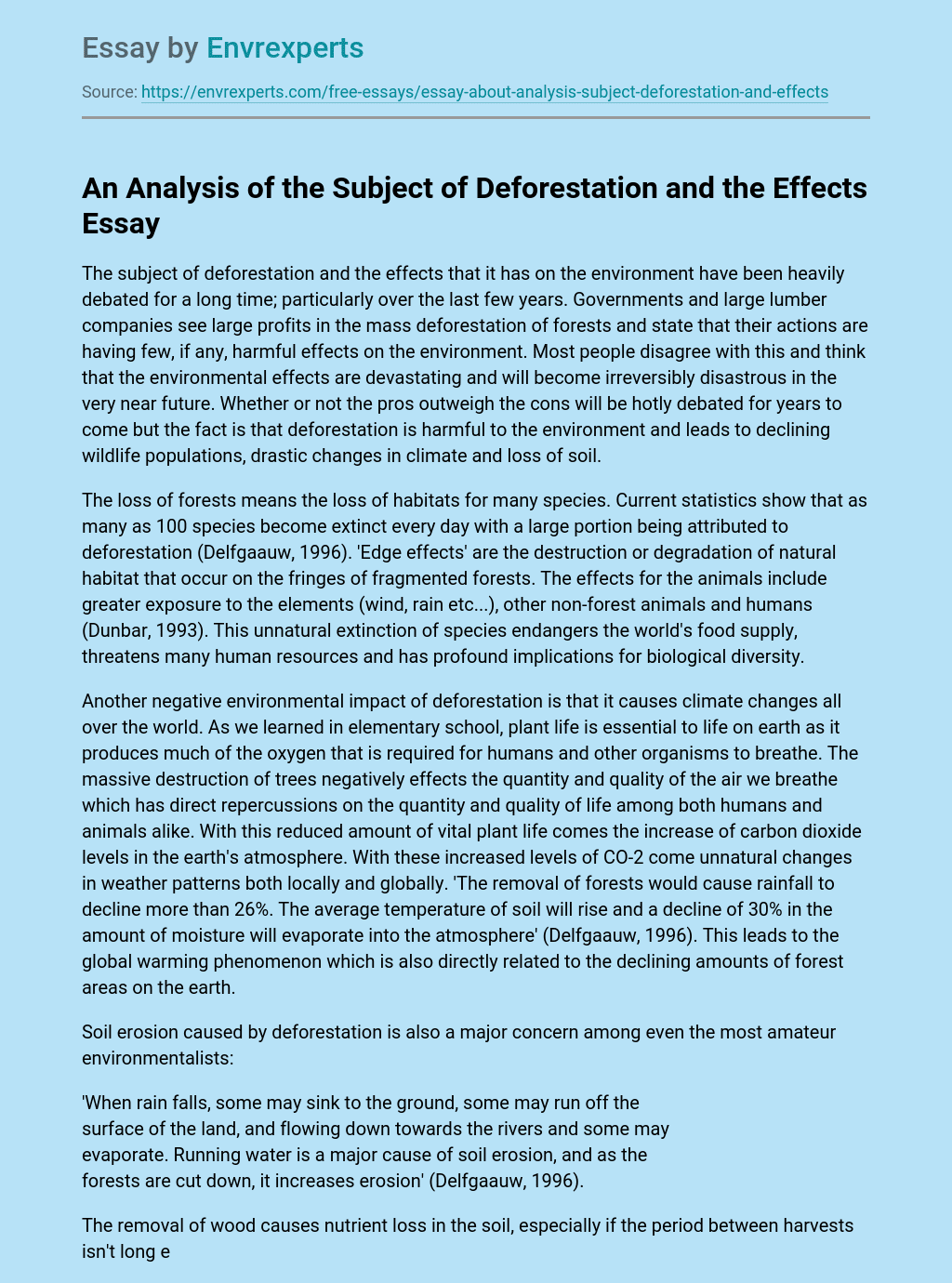