An Analysis of The Threat to Soil Biodiversity and Quality

It is well known that soil is an extremely important aspect in any ecosystem. It provides the nutrients for any land based fauna to develop and thus is at the start and end of the food chain. However, like any aspect of the environment, there is the threat of pollution and degradation with human influence. According the he article, over 80% of all land is influenced by human interaction.

Majority of the areas influenced are being degraded and being used at an alarming rate in which sustainability is impossible.

Don’t waste time
Get a verified writer to help you with An Analysis of The Threat to Soil Biodiversity and Quality
Hire writer
$35.80 for a 2-page paper

The article states that current extinction rates is 1000 o 10000 times faster than natural rates. Soil is home to many unseen organisms such as fungi, bacteria, and other microorganisms. These organisms fill a irreplaceable niche whether it be disposing of waste or filtration of water. The main threat to soil biodiversity and quality is human activity. Soil is the bases to many human needs through land use or agriculture. However, there are some new threats introduced by human activity such as the introduction of invasive species.

These invasive species would have never reached the area they are in now without the help of human interactions. The author is worried about the lack of knowledge of effects on soil biodiversity from such human actions and the costs if biodiversity continues to degrade at its current rate.

The article is well written, straight-forward, and to the point. It is however, extremely short. There is a lot of data, but in my opinion, it is very general and
vague. The authors argument is valid, but the points need to be discussed more in depth. They even write about lack of knowledge of the role of soil organisms and how they are being affected by humans. There is a lot of good information in such a short article. Their argument is well-written and has supporting evidence. I think more research is needed as well like is stated in the conclusion, but the ending was very short and did not give an overview of what was contained in the article’s body. Overall, a good, short article.

An Analysis of The Threat to Soil Biodiversity and Quality. (2021, Oct 31). Retrieved from http://envrexperts.com/free-essays/essay-about-analysis-threat-soil-biodiversity-and-quality 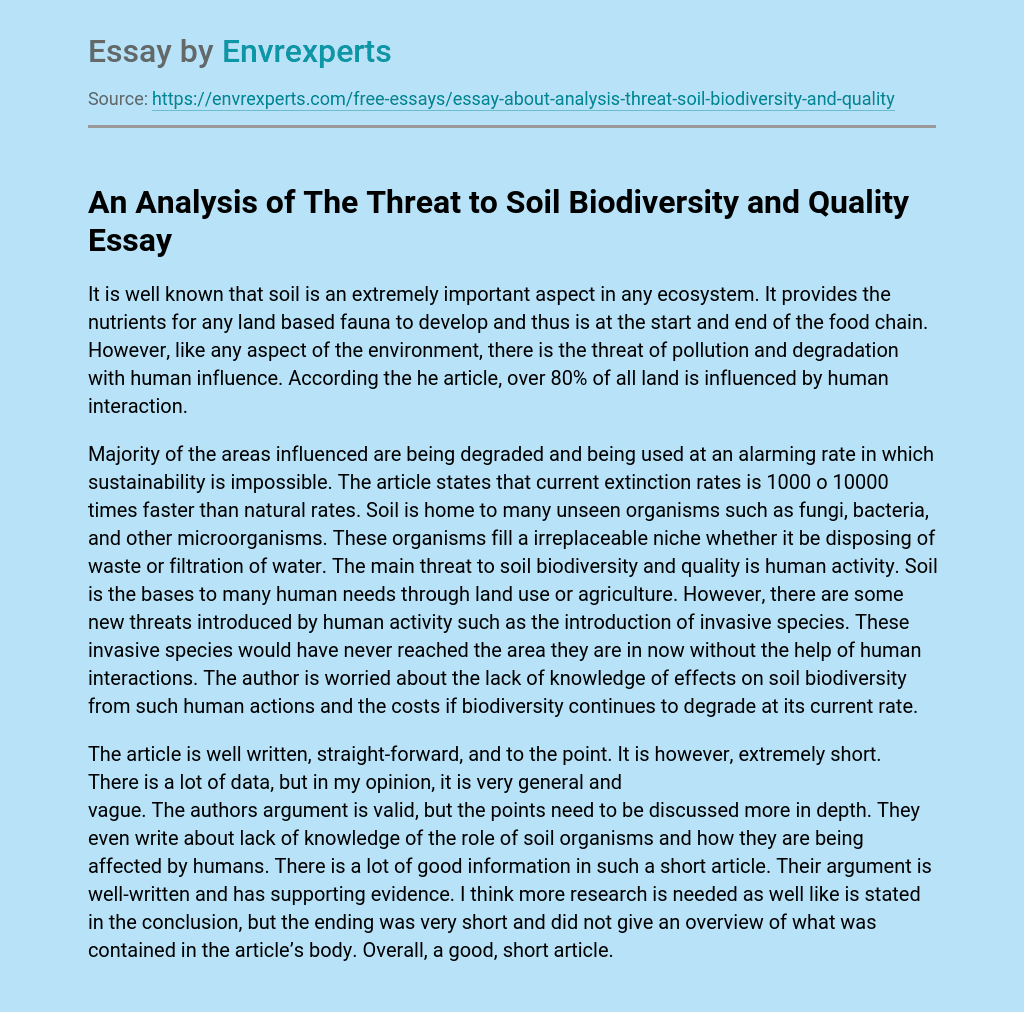