Air pollution is one of the most devastating forms of pollution. It occurs almost everywhere on Earth, especially in large cities. It harms people by causing breathing problems and sicknesses like cancer. Many plants, animals, and their habitats are damaged by air pollution. Many pollutants do not disappear from Earth's atmosphere, returning as acid rain and snow. CFCs, or chlorofluorocarbons, destroy the ozone, allowing in more of the sun's dangerous radiation. Moreover, our atmosphere is becoming an increasingly better insulator, as it prevents heat from escaping into space.

Don’t waste time
Get a verified writer to help you with An Analysis of the Topic of Air Pollution and the Issues of the Industrial World
Hire writer
$35.80 for a 2-page paper

This is leading to a rise in average global temperatures. Countless scientist believe that global warming will have an influence on sea level, world food supply, tropical diseases, and result in more extreme weather.

Air pollution is produced in many ways. The most common way is by the burning of fossil fuels, such as coal and oil, to power cars and heat homes. Between 1900 and 1970, nitrous oxide emissions increased by 690 percent as a result of automobile expansion.

When incompletely burned, these chemicals can cause great harm to the environment. There are also other ways pollutants are produced. Garbage that is decomposing in landfills gives off methane gas. Natural causes can also cause air pollution. For instance, forest fires can emit particulates that cause acid rain. Sulfur dioxide may be discharged from a volcano's eruption. If the eruption is large enough, the sky in the surrounding area can become covered in ash particles, causing vast darkness. Contrary to manmade pollutants, natural pollutants do not remain in the atmosphere for long.

In the majority of cases, the pollutants are confined in a small area surrounding a polluted area such as a city or a factory. If the pollutants were evenly distributed, they would be barely noticeable. The land shape can also affect the distribution. For example, Colorado would have poor distribution because of the Rocky Mountains, whereas the Great Plains would distribute more evenly.

Smog is a very common form of pollution. Most smog comes from automobiles and coal burning. Nitrous and volatile oxides reacting to the atmosphere cause smog. One particle found in smog is ozone. This is a dangerous thing because ozone in the lower atmosphere kills many forms of vegetation and irritates lung tissue, among other things. If there is a high level of ozone in the smog, it is very likely that there is a great amount of other pollutants as well. Once in smog, sulfur dioxide transforms into droplets of pure floating acid. This acid harms the lungs as well as eroding limestone, marble, and metal. Many historic artifacts are being destroyed by this, including the Tag Majal in India and the Parthenon in Greece. If the acid evaporates and comes back as acid rain, it can burn plants' leaves and kill fish in lakes. In our area and much of the eastern United States, many fish cannot survive because of this. Smog has caused death and diseases in many people. Smog can cause dizziness, headaches, and breathing difficulties. Four thousand people were killed by carbon monoxide poisoning in London in 1952.

The ozone is constantly attacked by chlorofluorocarbons, or CFCs, in our atmosphere. CFCs were once used in air conditioners and refrigerators as coolants, and as propellants in spray cans. Once CFCs reach the stratosphere, ultraviolet radiation (UV rays) breaks the molecules apart. This releases the chlorine atoms inside them. These atoms react with the ozone molecules, which absorb UV-B, and turn them into normal oxygen molecules that do not absorb UV rays. After this transformation, the chlorine atom remains the same as before, therefore it can continue to destroy as many as one hundred thousand ozone molecules. Nitrous oxide (fertilizer) and methyl bromide (pesticide) also break down the ozone, but to a lesser degree. For this reason, the use of CFCs has decreased dramatically. However, CFC molecules already released will be attacking the ozone for years to come.

An Analysis of the Topic of Air Pollution and the Issues of the Industrial World. (2021, Oct 31). Retrieved from http://envrexperts.com/free-essays/essay-about-analysis-topic-air-pollution-and-issues-industrial-world 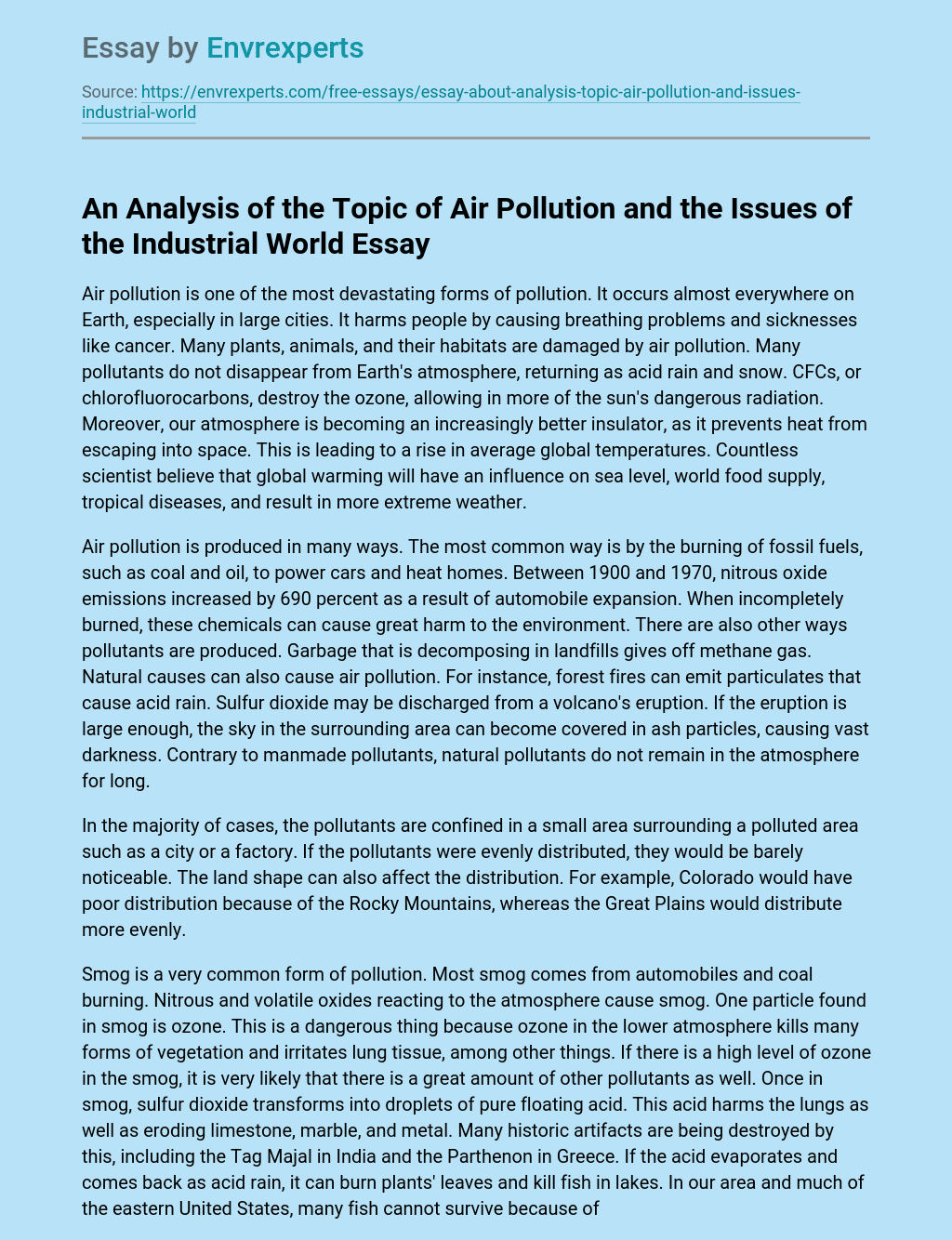