An Analysis of the Topic of the Deforestation

Ninety percent of our trees, 300 – 900 years old, have been cut down. The remaining 10% is all we will ever have. Deforestation is a significant issue of our time and must be taken seriously if we want to protect our remaining forests. The definition of deforestation by the Random House Dictionary of the English Language is 'to divest or clear of forests or trees' and we must stop deforestation to save our planet. My intent on writing this essay is to enlighten the reader about the facts on deforestation and to express my opinions about deforestation.

Don’t waste time
Get a verified writer to help you with An Analysis of the Topic of the Deforestation
Hire writer
$35.80 for a 2-page paper

There are approximately 3 400 million hectares of forests in the world, nearly 25% of the world's land area. Close to 58% of the forests are found in the temperate/boreal regions and 42% in the tropics. For about a millennium, people have benefited from the forests. Forest products range from simple fuelwood and building poles to sophisticated natural medicines, and from high-tech wood based manufactures to paper products. Environmental benefits include water flow control, soil conservation, and atmospheric influences.

Brazil's Amozonia contains half of the world's tropical rain forests. The forests cover a region 10 times the size of Texas. Only about 10% of Brazil's rain forests have been cut to date, but cutting goes on at an uncontrollable rate.

Since pre-agricultural times the world's forests have declined one fifth from 4 to 3 billion hectares. Temperate forests have lost 35% of their area, subtropical woody savannas and deciduous forests have lost 25% and ever-green forests which are now under the most pressure have lost the least area, 6%, because they were inaccessible and sparsely populated.

Now with new technology, such as satellites systems, low altitude photography and side looking radar, scientists can now figure that the world is losing about 20.4 million hectares of tropical forests annually and if these figures are not reduced, we will lose all of our tropical forests in about 50 years. It has been suggested that the high deforestation rates are caused partly by the fact that the new surveys are more accurate and thus reveal old deforestation rates that have not been detected with older methods.

At first there was concern only among foresters about deforestation but now the public has created organizations such as Green Peace to help increase awareness and reduce deforestation. The Food and Agriculture Organization or F.A.O, has worked mainly within the forest community to find new and better ways to manage the forests. Also, in 1985 there was the introduction of the Tropical Forestry Action Plan or T.F.A.P. This plan involved the F.A.O, United Nations development programs, the World Bank, other development agencies, several tropical country governments, and several government organizations. Together they developed a new strategy. More than 60 countries have decided to prepare national forestry action plans to manage their forests.

Tropical deforestation has various direct causes: The permanent conversion of forests to agricultural land, logging, demand for fuelwood, forest fires and drought. Slash and burn clearing is the single greatest cause of tropical rain forest destruction world wide. Air pollution is also a major threat to the forests in the northern hemisphere and is expected to increase. Reduced growth, defoliation and eventual death occur in most affected forests. From 1850 to 1980 the greatest forest losses occurred in North America and the Middle East (-60%), South Asia (-43%) and China (-39%). The highest rates of deforestation per year are now in South America (1.3%) and Asia (0.9%).

Over the last two decades the world became interested in the loss of tropical forests as a result of expanding agriculture, ranching and grazing, fuelwood collection and timber exportation. The consequences are increased soil erosion, irregular stream flow, climate change and loss of biodiversity. Deforestation is second only to the burning of fossil fuels as a human source of atmospheric carbon dioxide. Almost all carbon releases from deforestation originate in the tropics. Global estimates of the amount of carbon given off annually by deforestation is 2.8 billion metric tons. Deforestation accounts for about 33% of the annual emissions of carbon dioxide by humans. In 1987 11 countries were responsible for about 82% of this net carbon release: Brazil, Indonesia, Colombia, Cote d'Ivoire, Thailand, Laos, Nigeria, Vietnam, Philippines, Myanmar and India. During 1987 when there was intense land clearing by fire in Brazil's Amazon, more than 1.2 million metric tons of carbon are believed to have been released.

To save our remaining forests we have to learn three important principles: Reduce, reuse, recycle, i.e., lower the consumption of paper and paper products. Some examples are getting off junk mail lists, writing or photocopying on both sides of the paper, using cloth shopping bags, cloth instead of paper napkins and paper towels, cloth diapers, recycling waste papers, and buying recycled paper products. Another important fact to reduce deforestation is that we should communicate our views to our elected representatives and build a movement toward forest protection. Finally we should visit forests and learn to appreciate them as places of inspiration and recreation.

The following two examples of case studies represent deforestation in the U.S. and in Canada. It used to be that Northern California's Pacific Lumber Company was a timber operation that was an example of good forestry. The family run firm harvested selectively from it's 195 000 acres of Redwoods. Besides looking after the forest, Pacific Lumber looked after it's employees, many lived in the company town of Scotia, the company paid their kid's college tuition, the company's controlled logging virtually guaranteed that the trees would last well into the next century. All that changed in 1985 when Charles Hurwitz of the New York based MAXXAM group bought the company and financed the take-over by issuing some $800 million in high interest bonds. To pay the dept., Hurwitz doubled the rate of logging. Since the late 1980's huge tracts of land have been clear-cut. Economically the result has been a logging boom which will be followed by inevitable bust when the tall timber is gone. Ecologically the logged land has been left bear.

The B.C. government nearly owns all the forest land and seems inclined to support timber interests than acting as guardians of the land, Everyday loggers cut down more than 1.5 square miles of growth forest. Few native American tribes there have signed treaties with the Canadian government. After a struggle, the Haida nations in 1987 won the creation of a $350 000 acre park off South Moresby Island. A fight continues over 22 000 acre Meares Island, claimed by the native Clayoquot tribes. In 1984, a blockade by the Clayoquots (off Vancouver) turned back a boat load of loggers. The vigil to defend the island lasted for six months, when a court ruling prohibited further logging until the Clayoquots' claim to the land is settled.

In Conclusion, regulated deforestation can supply us with lumber without completely destroying the forests, but deforestation which is geared economically can permanently destroy our ecosystem. If deforestation is used wisely, possibilities of positive effects take place. Some of these are: Jobs would be created, the economy would be strengthened, expanding agriculture would provide much needed resources to underdeveloped countries and people from poor urban areas could be resettled. Proper deforestation also increases foreign exchange (for example, our government promotes a new type of harvest and sells it to other countries).

Still, if deforestation is used badly it will destroy forests, add to global warming, and destroy cultures. Bad deforestation degrades the ground and the economic benefits from unwise deforestation barely enriches the community while the money goes into the pockets of politicians or timber companies. Furthermore, there is the loss of local products such as fishery, honey, game, berries and also important species of plants that could help modern medicine.
I believe that if deforestation is not reduced soon, our ecosystem will be permanently damaged and we will have lost many our resources. Until then you might want to contact these organizations to find out more about our forests and become involved:

An Analysis of the Topic of the Deforestation. (2021, Oct 31). Retrieved from http://envrexperts.com/free-essays/essay-about-analysis-topic-deforestation 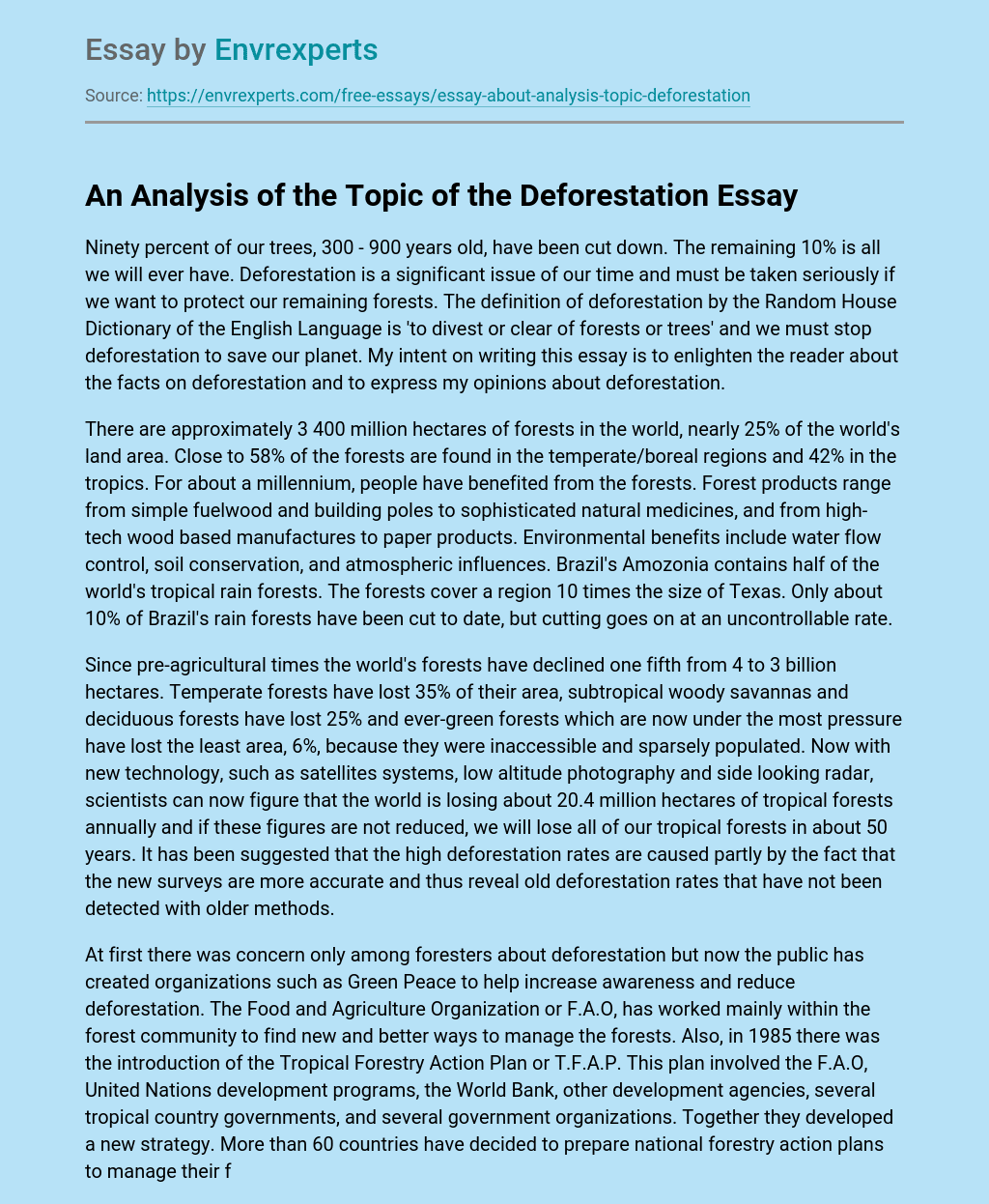