To discuss this question effectively I will first describe the dominant ideology before moving on to discuss the ecological critique of economic development and whether it provides an viable alternative viewpoint or is simply a fashionable but irrelevant set of theories. One of the first problems encountered in a discussion of this nature is one of terminology, because it can be seen that economic development/progress and growth do not always have agreed meanings nor are they necessarily synoymous. Gavin Kitching provides us with one answer when he states the position of economists such as David Ricardo and Adam Smith – 'For these thinkers, economic growth occurred in society if the volume and value of output or production in that society rose quickly and continuously'.

Don’t waste time
Get a verified writer to help you with An Analysis of the Topic of the Questions and the Dominant Ideology on Ecological Critique
Hire writer
$35.80 for a 2-page paper

However, other thinkers such as Sismondi believed that increased production in itself did not constitute progress unless it was accompanied by a more equitable distribution of wealth and economic power.

For the purposes of this essay, I shall define economic growth as being a sustained increase in income per head of population, whilst development is the former accompanied by falling poverty expressed in terms of more even wealth and income distribution.

It can be seen that the dominant ideology prevalent in the subject of economic development stresses the necessity of development through industrialization as a means to increased prosperity. It is felt that the nature of agriculturally-based economies prevents them from making anything other than a relatively small increase in people's incomes over time, and at the very least such economies must be able to trade with other, more industrialized nations.

This is the main reason why industrialization is perceived as essential for the facilitation of significant economic development, as well as the best way to gain the benefits of mass production such as economies of scale. It is now necessary to look at the ecological critique of these ideas, and it can be seen that it is only one of a number of alternative perspectives which are connected by a common belief that economic development in its usual sense has largely undesirable effects. Others include the ideology of what has become known as 'populist rural socialism', and the belief in the introduction of relatively cheap alternative technology to overcome economic dependency and unemployment. The first tenet of the ecological approach that I will discuss basically states the obvious point that infinite economic growth at the present rates cannot be sustained with finite resources. Because the raw materials and natural resources required by industrialization and economic growth are limited, there are also limits to development. It has been argued that the capitalist economies such as Britain and the United States impose a significant enough burden on the world as it is, without the problem being exacerbated by other more 'economically backward' countries attempting to develop along the same lines.

Connected with this problem of finite resources is the possibility of the earth's life-sustaining ecological system being irreparably damaged by the increasing demands being placed upon it. Proponents of the above view sometimes cite scientific research estimating that certain natural resources such as coal and gas currently vital to economic growth will be exhausted in a matter of decades. It is for the above reasons that some economists advocate a world-wide strategy of 'zero economic growth' to offset a catastrophic loss of resources which could ultimately destroy the human race. However, it is possible that development and exploitation of new resources and technologies will mean that such a crisis is unlikely, if not impossible. The market mechanism itself can actually be of service in this respect by pushing up prices for particular resources once they become scarce, hence giving people an incentive to find alternatives. For example, as coal reserves are depleted and existing stocks become more expensive, scientists are more likely to look towards other ways of generating electricity such as geothermal, wind and solar energy. In addition to this, such rising prices are likely to encourage greater recycling of materials, and could well result in greater consumer demand for more durable products which make more efficient use of resources, such as washing machines which don't have a limited built-in lifespan to add to the manufacturer's profits. Hence it can be seen that although economists adhering to the mainstream approach to development do not usually go so far as to say that economic growth is unlimited, they do not generally perceive problems with resouce depletion developing in the forseeable future. Currently, it is this particular outlook that has the most influence amongst policy-makers, something that is evidenced by the supremacy of commercial self-interest that generally exists in manufacturing and industry – 'No state to date has yet formulated a policy for monitoring or overseeing the use and processing of natural resources'.

From the ecological perspective, the damage believed to result from overdevelopment also includes pollution and environmental damage as well as the aforementioned depletion of resources. For example, many industrial processes involve potentially hazardous end and by-products, such as radioactive waste and acid rain, and it is thought that increasing development can only add to these existing problems, something which will ultimately affect the environment as well as the people that work in such industries. However, it has been argued that the aim of achieving zero or minimal economic growth as soon as possible to counter this problem may be naive and also unnecessary because the economic system can do this for us with only minimal interference. For example, the costs of pollution can be shifted onto those responsible for it via the mechanism of increased taxation. Increasing taxes on the most polluting kinds of vehicles could reduce consumer demand for these and make people look instead at more enviromentally friendly forms of transport. Another objection to the traditional patterm of economic development is the perceived inefficiency and wastefulness involved in certain forms of mass production, which has particular relevance to some of the intensive methods used in western agriculture where a great deal of reliance is placed upon artificial aids to production such as fertilisers and combine harvesters. Evidence has been produced that 'indicates that the energy used to make all these chemical inputs and to drive modern farm machinery is greater than the energy or calorific value of the resultant crop: more energy input for lower energy output'. This problem is made worse by the existing patterns of consumption in agriculture where products such as grain are often used primarily to feed meat-producing animals instead of being used directly as food for humans. In this particular case, the nature of the food chain dictates that a deal of energy will be lost in the lengthy process of turning grain protein into meat protein, hence decreasing overall efficiency.

Further objections to the typically capitalist pattern of industrial economic development concern the negative social effects of this system on those who are forced to live and work within it. This view is not unique to the ecological approach to development in that similar sentiments have been expressed by economists from other schools. For example, Karl Marx spoke of the process of 'alienation' where work becomes debased and loses its true meaning for the majority of the population who are robbed of the value of their surplus labour in order to create massive profits for the bourgeoisie. In general, it is thought that high technology and increasingly advanced production do not necessarily serve the needs of society in the way traditionally believed, but instead become ends in themselves – the system is 'indifferent or even callous with regard to people's needs, destructive of the human spirit, and alienates people from their work and each other'.

To conclude, it could be said that although some of the supposed economic remedies proposed by the ecology movement may be rather alarmist as well as impractical (for example, the achievement of zero economic growth), it is nevertheless true that the ecologist critique in general makes a number of valid points on the issue of economic development. These are mainly that limits to growth do exist, and that humanity in general must respect them by acknowledging the fact and doing the best it can to conserve resources which may one day run out.

An Analysis of the Topic of the Questions and the Dominant Ideology on Ecological Critique. (2021, Oct 31). Retrieved from http://envrexperts.com/free-essays/essay-about-analysis-topic-questions-and-dominant-ideology-ecological-critique 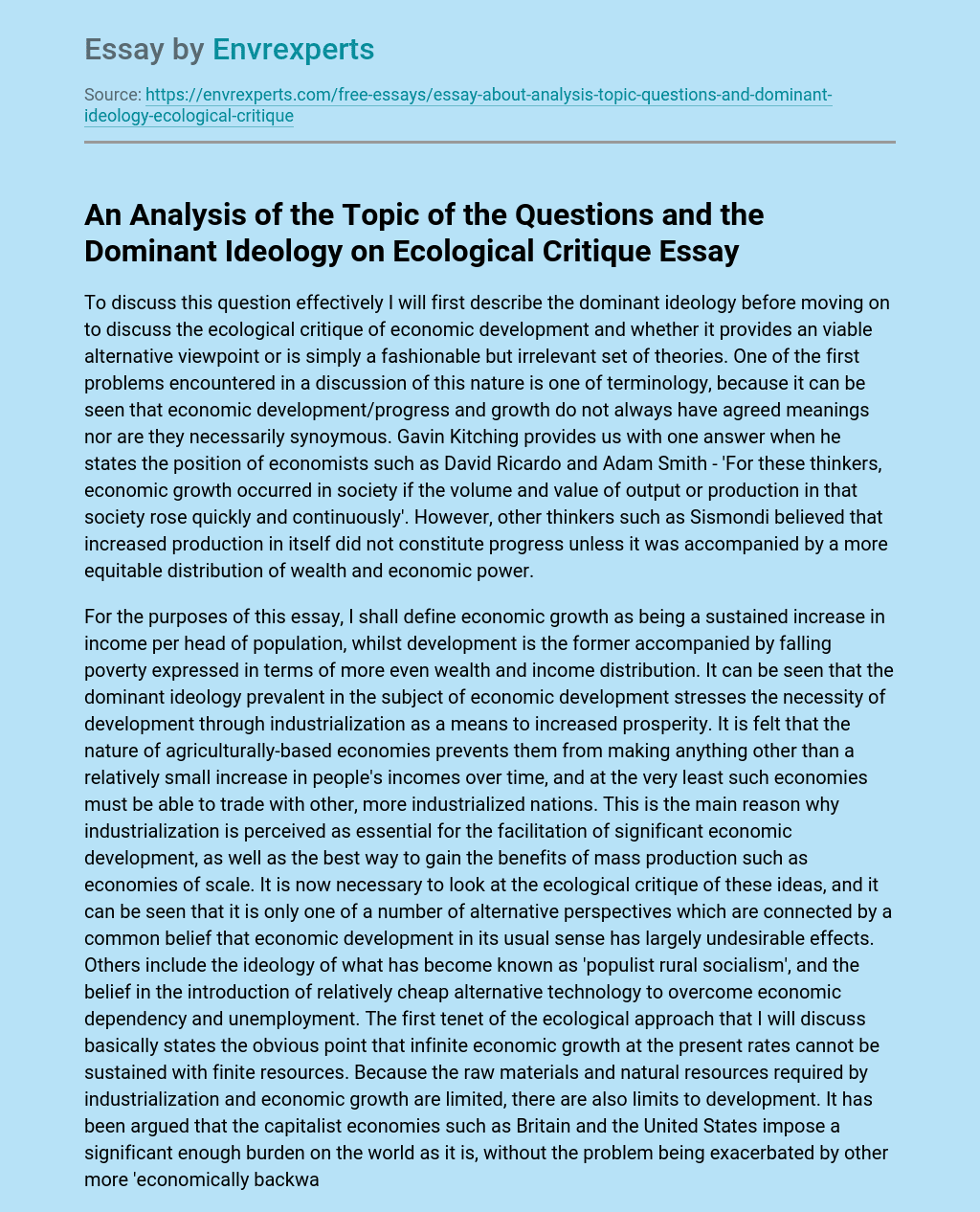