Every year 11 million hectares of tropical rain forest are lost through commercial and subsidence pressures ( Winterbottom and Hazelwood, 1987). The pressures that cause forest clearance varies geographically. In Amazonia the primary force is to clear cut the forest for agriculture (Goodland, 1982). The most common usage of this cleared land is for the production of coffee, cocoa, rice and for cattle ranching (Goodland, 1982). However after approximately three years, almost all the planted crops will fail (Goodland, 1982).

Don’t waste time
Get a verified writer to help you with An Analysis of Tropical Rain Forests and the Many Issues of Ecology
Hire writer
$35.80 for a 2-page paper

The root systems of trees in the tropical rain forest are shallow, this indicates that the nutrients are never temporarily retained or stored in dead organic matter. Instead they are rapidly reabsorbed by forest litter (Ho, 1982). Forest clearance will interrupt the closed nutrient cycle (Hemming, 1982). Deforestation will have a drastic effect on the hydrologic cycle which is illustrated in Figure 1. It will lead to a decrease in precipitation and cause the rains to become more seasonable (Hemming, 1982).

Other effects of clearance include the leaching of cations, the fixation of phosphorous and soil compaction (Fearnside, 1982).

The agriculture practices of the indigenous people has been unsustainable at very low population densities. If sufficient fallow time is left between agricultural activity, usually between 10 to 15 years, then the land will return to it's natural state. However population densities have increased to above the sustainable threshold in Amazonia and crop yields will decrease with each successive year that agriculture occurs. This is depicted in Figure 2 and it clearly shows that agriculture at present is unsustainable.

What are the forces that lead to this destruction? The poor people burn down the forest for agriculture out of a necessity to grow food and to raise money (Goodland, 1982).

However Brazil's land ownership laws promote the burning of these forests (Goodland, 1982). Regionally, local governments have encourage land clearance for cattle ranching (Coockburn and Hecht, 1989). On a larger scale migration is a major factor which can be associated with the building of roads (Fearnside, 1982). Access to roads increase migration to these areas and leads to an increase in deforestation by these new settlers. Since the population has increased, new roads are needed: thus there exists a positive feedback between roads and deforestation (Fearnside, 1982). A good example of this is Ouro Preto in Rondonia (Fearnside, 1982). On a global scale migration is caused by the displacement of people due to forestry and large aid projects. The Tucuri hydro project resulted in the resettlement of 20 000 to 30 000 people (Fearnside, 1982). Amazonia has fallen victim to 'inappropriate technology' which is clearly the fault of the developed world. First world firms of mining and timber consortia extract resources, make a profit and then leave behind ruins (Coockburn and Hecht, 1989).

International markets have lead Amazonia into thriftless production of export (Coockburn and Hecht, 1989). This can be seen in the 'hamburger connection' where North American food chains have kept cost low by purchasing cheap Third World beef (Coockburn and Hecht, 1989). In addition, enormous national debts, especially in Brazil have made the clearance of tropical rain forests a necessity. It is debatable if the developed world has caused the corruption in Third World societies. Brazil is a very polarized society where a few have the majority of the capital. However it is the developed world's standard of living that these few rich people do not want to give up. Is there any way to prevent the destruction of the rain forests? A grass roots approach would be educating the poor and offer the best technical solutions. However studies of the particular area should be conducted to ensure sustainablility. Education would also help in reducing the population if the proper services were supplied. On a regional scale, biological reserves should be established to protect parts of the rain forest as illustrated in Figure 3 (Sawyer, 1990). Nationally, land use policies should be changed, especially in Brazil; if one clears the forest it becomes the property of the individual (Sawyer, 1990).

However political pressure would be needed to establish this. Also royalties, concession fees and timber export taxes should be increased and logging licenses removed for those companies not carrying out logging to a satisfactory level (Sawyer, 1990).
There are many plans that can be introduced on an international scale. The first being a "debt for nature" swap to alleviate some of the national debt (Sawyer, 1990). However additional policies would be needed to ensure that national debts are not established again and that the effects descend down through society to the poor. Timber prices should be increased to reflect the costs of the degradation of the forests (Sawyer, 1990). This would mean that the same profit could be made but with less trees (Sawyer, 1990). The best approach would be a subtle change in consumer consumption illustrated by Rorke Bryan. The establishment of the International Standards Organization would certify environmentally sound production of products. Eventually the public will switch to these endorsed products. Not only would it promote environmentally sound practices but other companies, which do not practice environmentally sound production would lose income. Eventually these companies would be forced to either change or go bankrupt. Tropical Rain forest have an enormous global importance.

The agriculture in Amazonia clearly has no hope of success. Thus these forests are being destroyed and it is quite possible that they will never recover. There are many political, economic and social factors acting in Amazonia. The future of these forests may look bleak but solutions to this problem are possible. There needs to be a change consumer habits within the developed world and there needs to be changes in how the poor in less developed countries are dealt with.

An Analysis of Tropical Rain Forests and the Many Issues of Ecology. (2021, Oct 31). Retrieved from http://envrexperts.com/free-essays/essay-about-analysis-tropical-rain-forests-and-many-issues-ecology 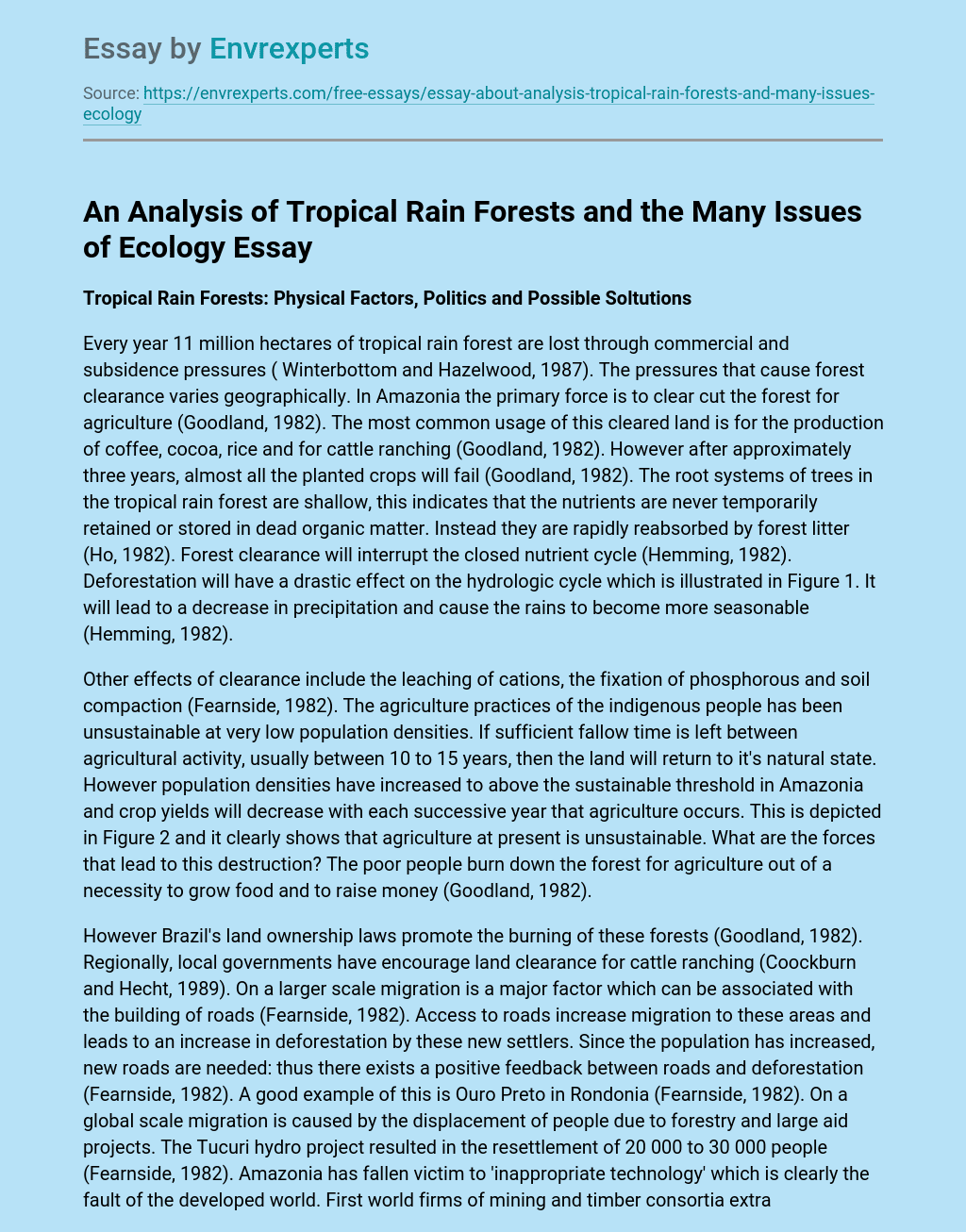