In any given week humans are often reminded of how messed up our environment is due to human pollution. Humans have a tendency to leave behind waste, waste that takes centuries to be broken down into reusable organic matter. If you haven't guessed it yet, plastic is the culprit. Plastic is something that scientists thought they had figured out, but actually hadn't.

Plastic is everywhere; stores, supermarkets, in the ocean and roadways. This becomes a problem because plastic doesn't biodegrade.

Don’t waste time
Get a verified writer to help you with An Analysis of the Truth Behind the Use of Biodegradable Plastics and Recycling
Hire writer
$35.80 for a 2-page paper

Biodegradation is a natural process in which nature itself; fungi, worms and insects break down organic matter into nutrients which in turn is recycled back through the natural food chain (“Biodegradation"). Biodegradation is essentially nature's way of recycling. Biodegradable plastic was then introduced to help combat the problem of plastic build up. The only difference between the two types of plastic is that one is treated with chemical additives such as iron, cobalt and nickel which is said to help plastic decay at a faster rate (“Additives to Biodegrade").

How harmful are plastics to the environment? Since science tells us that plastic takes centuries to biodegrade it's safe to assume that it can cause problems for wildlife and their surrounding environment. Plastic bags that are able to work their way into the oceans can be a serious threat to the marine life. A dolphin can easily mistake a floating plastic bag for a delicious jellyfish. If the dolphin manages to swallow the plastic bag, they'll eventually die a painful death due to plastic toxicity and the inability to eat (Wagner).

As you can see, the effects of plastic can be quite devastating.

Is recycling an alternative to help reduce plastic? James Wagner, an author for “HealthGuidance,” states that a study has proven that very few recycling facilities actually recycle plastic. These facilities know that recycling plastic is a difficult and costly task. Facilities will either burn them or send them off to a landfill. If plastic bags can't be used, what should take its place? The bag that is recommended for use is a now popular cloth carrying bag or tote. The bag, although better than plastic, probably has some downsides to it as well. For the time being, this a recommended option.

Chemists at Michigan State University recently tested biodegradable plastic and ultimately found that they don't work ("Additives to Biodegrade”). The chemists mimicked the conditions that plastic is usually exposed to; biodegradable plastic with an oxygen rich environment (compost) for six months, biodegradable plastic in an oxygen poor environment (landfill) for a year and a half and regular soil with non-chemically treated plastic as the control group for three years. They then measured the daily output of methane and Co2. The results are surprising. The amount of gas released from both kinds of plastic were the same. That essentially means that the biodegradable plastic takes just as long as non-chemically treated plastic to decay. The plastic was then taken to a microscope for a closer look and it showed that they had little to no signs of breaking down. Companies that used biodegradable plastics for their products paid for the chemist's research because they wanted to see if they got what they were paying for, which they didn't.

William Rathje, late paleontologist and founder of the Tucson Garbage Project, found that chicken bones still had meat on them even after years underground. (“Many Plastics Labeled"). This was quoted because he essentially meant that if organic life already takes a long time to decompose, imagine how long something will take if it isn't organic at all. The best option that they have come to is to not use any additives, but simply recycle to help reduce plastic pollution

Many countries and local counties have laws set in place that ban single-use plastic bags to help reduce the increasing trash ("State Plastic”). The local government of Lake Los Angeles, has issued a local plastic bag ban that affects shops and liquor stores. These stores will provide a plastic bag if you're willing to cough up an extra ten cents per plastic bag. The store owners are now encouraging customers to use re-useable cloth bags. As months passed with the plastic bag ban still in effect, the town has noticed that there is significantly less trash flying around in the streets.

It's really quite interesting how the plastic bag ban can help reduce the effects of plastic build up, but on a larger scale, such as cities, it seems like it would have a hard time taking effect. The problem with the plastic bag ban is that it only pertains to smaller stores. Supermarkets, clothing outlets and sporting goods stores still give bags when an item is purchased. Hopefully, the plastic bag ban will reduce the trash in the streets of major cities such as Los Angeles or San Francisco.

Now knowing that biodegradable plastic doesn't work and that recycling doesn't help much if facilities end up throwing away or burning plastic, should humans continue to use plastic or should the search for use other materials and finding new ways for plastic to biodegrade be sought out? It's a tough question. The answer to our plastic pollution can't be found any time soon because what scientists thought we knew about biodegradable plastic has seemed to set us a step back in terms of figuring out how to get plastic to decay faster.

The plastic bag ban that is in effect seems like a great start to help reduce waste. Many people will be angry that a ban on plastic bags is soon coming into effect, but hopefully this should help reduce the effects of plastic in the environment and potentially find something that can altogether be useful in someone's everyday life while keeping the environment safe. This makes you wonder if other so called green products are actually helping the earth or furthering its destruction.

An Analysis of the Truth Behind the Use of Biodegradable Plastics and Recycling. (2021, Oct 31). Retrieved from http://envrexperts.com/free-essays/essay-about-analysis-truth-behind-use-biodegradable-plastics-and-recycling 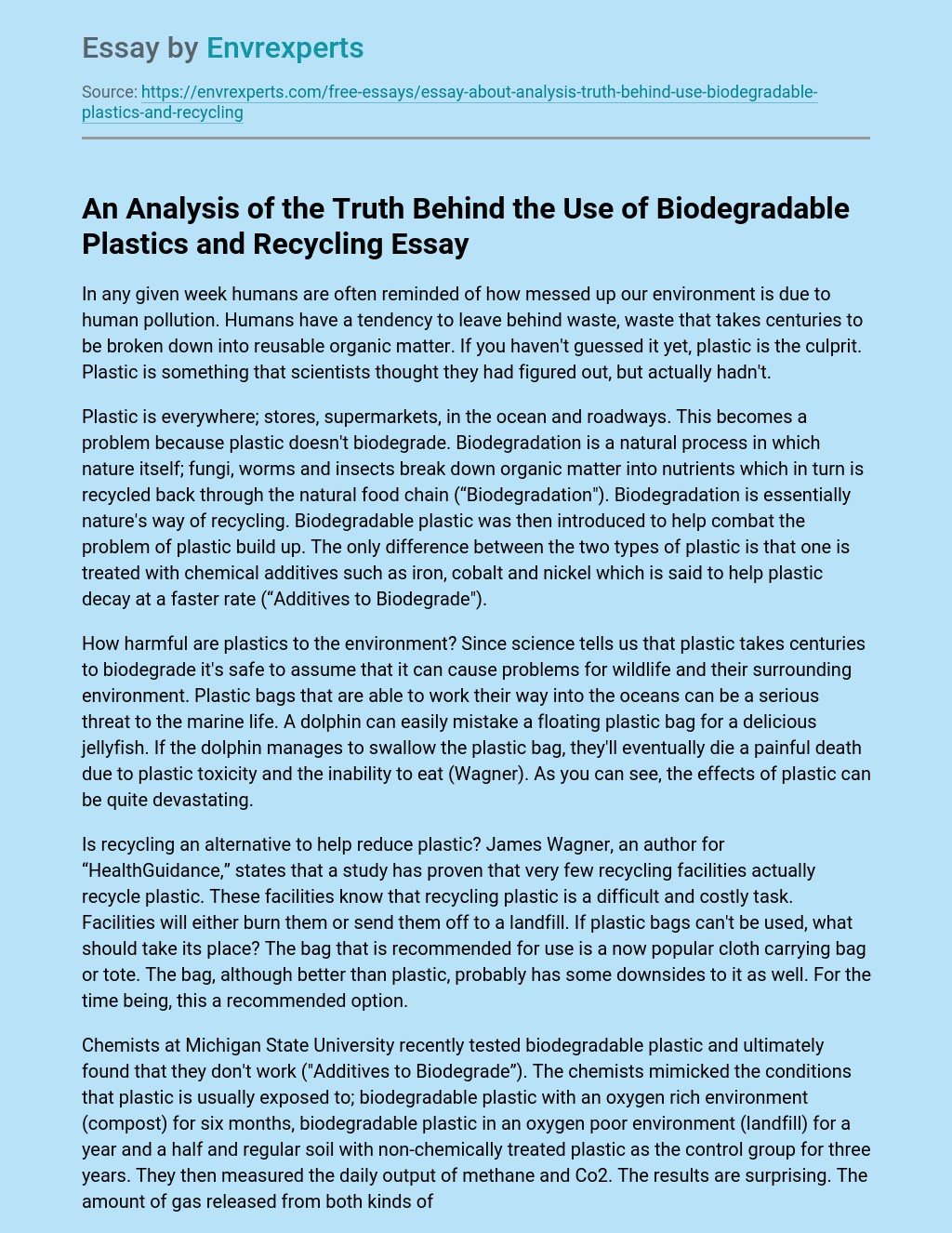