An Analysis of the Uses of Biological Pesticides in Agriculture

Some bugs and insects, most don't realize, have jobs to do. The work some bugs put in are not wanted. Some bugs are left alone to do what they want, while others are killed off for certain purposes. Most agriculture crops spray pesticides to rid the plants and vegetables of unwanted bugs.

Pesticides do the job, killing the insects, but they kill the environment too. We need to stop using pesticides and use biotechnology and genetic engineering to control pests and insects.

Don’t waste time
Get a verified writer to help you with An Analysis of the Uses of Biological Pesticides in Agriculture
Hire writer
$35.80 for a 2-page paper

In James Whorton's book, Before Silent Spring, he describes agriculture before the Industrial Revolution. He writes that farmers in the 1800's used arsenic and sulphur to stop insects and molds from harming their crops. Even then it was known that arsenic caused skin lesions, nausea, vomiting, diarrhea, and swollen, painful hands and feet. In England in the late 1800's arsenic was found in contaminated sulphuric acid, used then to make glucose for "cheap beer". People in the poorest classes, who could only afford this "cheap beer", were displaying these symptoms, along with neurological problems and in severe cases, death.

As the Industrial Revolution continued, more and more chemicals were available to farmers, pesticides such as Malathion, DDT, dioxin and polychlorinated biphenyl, or PCB. In 1962, Silent Spring by Rachel Carson was published. Ideas against pesticides had not been so publicly addressed.

Pesticides, if their use continues unregulated, are very dangerous. Alligators and humans are at the top of the food chain. Both unknowingly eat contaminated food out of contaminated waters. People will be able to have fewer children, possibly due to global pesticides contamination, much like the alligators of Lake Apopka. Biotechnology and genetic engineering will not add new chemicals to an already chemically altered environment. Biotechnology could eliminate the need for such chemicals entirely. By implementing the pests' natural enemies, such as bacteria, fungi, to combat an infestation, we could have a less toxic, cleaner environment. For example, many people chemically treat their lawns, either doing it themselves or by using commercial companies, to beautify their property. These pesticides and herbicides are chemicals that can be replaced by a strain of bacteria, Bacillus popilliae. The bacterium causes milky spore disease in the Japanese beetle grubs that eat the grass roots. These bacteria will not harm humans or animals, something the chemicals cannot guarantee. Biotechnology also makes better, safer, and less expensive products for farmers. "A new biological pest controller costs $1 to $2 million and may only need three months to test, as compared to a new chemical pest controller costing $40 to $70 million and must be tested for five to seven years to be marketable." (Adams)

Genetic engineering is part of the movement toward safer, cleaner farming. It benefits the health society, the environment, and agriculture. Geneticists are creating insect resistant seeds for soybeans, corn, cotton, and other crops which will reduce the need for pesticides, if not eliminate them. Plants that are cultivated presently may not have the gene to be resistant to certain insects, due in part to being commercialized. In the wild, relatives of these plants may still have this trait. The goal is to transplant the resistant gene into the cultivated plant, making it resistant to the target insect. Geneticists are developing fruit and vegetable crops that are disease resistant and use less fungicides and pesticides. Genetic engineering can also reduce the workload for the farmer. Maurizio G. Paoletti and David Pimentel attest to this in their article for "BioScience". By using new-engineered seeds for perennial and/or drought resistant grain crops, the farmer does not need to irrigate as often and use enormous amounts of water per acre. He also does not need to replant his grains each year, reducing labor and its costs and conserving the land's water and nutrients. Using genetic engineered seed is cost effective. These seeds are more expensive, but the farmer saves money by spraying less pesticide and makes money with a higher crop yield.

We have found two safer and less toxic ways to have our food and eat it, too. We need to use them instead of spraying expensive, toxic, hormone altering chemicals on our fields of grain. Biotechnology and agricultural genetic engineering are two important ways to get them away from the food we eat without poisoning it. Besides stepping on them, of course.

An Analysis of the Uses of Biological Pesticides in Agriculture. (2021, Oct 31). Retrieved from http://envrexperts.com/free-essays/essay-about-analysis-uses-biological-pesticides-agriculture 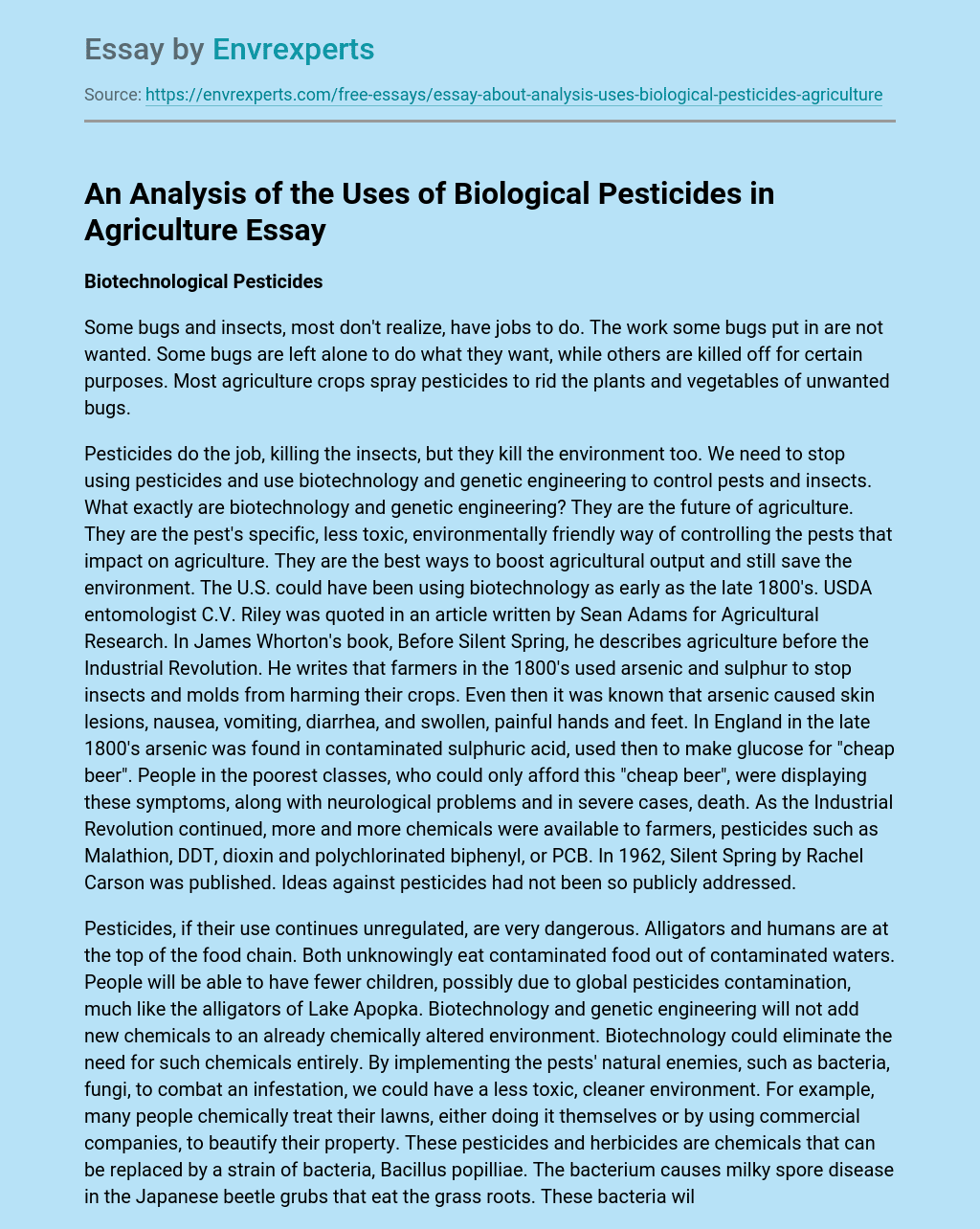