An Analysis of Wind Power as an Alternate Source of Energy

Wind is created from an unequal heating of the earth's atmosphere therefore wind is an indirect form of solar energy. Convection currents, which occur due to the fact that warm air rises and cooler air drops, produces this cycle of air or wind. Some of the suns energy directly heats the air but mostly the heat is transferred from the earth into the atmosphere. Between 1-2% of the solar radiation that reaches the Earth is converted into energy in the wind.

Don’t waste time
Get a verified writer to help you with An Analysis of Wind Power as an Alternate Source of Energy
Hire writer
$35.80 for a 2-page paper

Seasonal variations in the speed and direction of the wind result from the seasonal changes angle of the Earths spin relative to the Sun. Daily variations are caused by the different speeds of heating different surfaces, for example land and oceans heat up at different speeds.

The force excreted by wind on a propeller, or some sort of mechanical instrument is used to create motion. Thus, converting mechanical energy into electrical is not a problem.

The process is the reverse of an electric motor which uses a magnet to force the shaft to spin. Likewise, if the shaft spins it will induce a magnetic field thus providing electricity. There are three basic physical laws governing the amount of energy available from the wind. The first law states that the power generated by the turbine is proportional to the wind speed cubed.

Therefore, a proposed site must have a very fast wind a lot of the time to generate electricity. It is very expensive to deploy lots of wind turbines if each is only going to produce very little electricity. The second law states that the power available is directly proportional to the swept area of the blades. That is the power is proportional to the square of the blade length. For example, doubling the blade length will increase the power by four times, and tripling the blade length will increase the power by nine times. The third law states that there is a maximum theoretical efficiency of wind generators of 59%. In practice, most wind turbines are much less efficient than this, and different types are designed to have maximum efficiency at different wind speeds. The best wind generators have efficiencies of about 35 – 40%.

Wind is not a reliable source of energy in some areas. Compared to coal power plants which can rely on constant output the wind generators may produce a satisfying out one season and be inoperable the in the next. Although harnessing the kinetic energy of the wind is a very good source of energy as it is renewable in the sense that no natural resource is being used up it cannot compare to the output of a coal power plant. In the short term the coal power is cheaper with a lot less hassles. However, coal burning produces a large about of greenhouse gases and not last forever. Wind power generators are 100% pollution and greenhouse gas free with a number of different models, which are designed for different wind speeds. A factor in designing a generator is its use. More efficiency can be achieved if a generator is designed for lower speeds in the areas it is going to be used. Another factor, which must be kept in mind, is that such generators must not spin faster than their designed speed. For this problem a protection system must be designed to slow down the rotation of the rotor. appendix 3

This can be implemented in three different ways. The system can be shut down to avoid damage, mechanical breaks could be used, or the angle of the rotor compared to the wind direction can be changed to decrease the area, which the wind hits.
The system also has to be designed to turn the rotor in the direction of the wind while in normal use. Known as the directional system, it can be implemented by a tail assembly, or by a motor and sensors, which calculate the position of greatest force.

Practical wind turbines are designed to work between certain wind speeds. The lower speed, called the 'cut in speed' is generally 4 – 5 ms-1, as there is too little energy below this speed to overcome system losses. The 'cut out speed' is determined by the ability of the particular machine to withstand high wind. The frated speed' is the wind speed at which the particular machine achieves its maximum rated output. Above this speed, it may have mechanisms that maintain the output at a constant value with increasing wind speed.

The greatest challenge to the economic use of wind power is its variability. There are very few areas on the Earth where wind is fairly constant throughout the day and throughout the year. Energy storage, or a backup system, is therefore required for windless or extremely windy periods. A proposed solution is to connect all the sites of wind generation into a grid which in turn will reduce the complications of variable wind speeds greatly as it is unlikely that all or none of the stations will have high wind speeds or no wind. Another solution which is much simpler than connecting sites or storing the electricity is to create a compliment system which creates electricity from a combination of wind and a fossil fuel plant or solar cells.

Wind powered machines provide a source of renewable energy that is appropriate and cost effective in some circumstances. Windmills have been used for centuries to pump water and grind grain, and more recently to generate electricity. Small systems (from a fraction of a W, to several kW power rating) are frequently used as part of remote area power supplies, and larger systems (50 – 2MW) have been integrated with the main power grid in several countries (for example there are about 18 000 systems in California with nearly the same peak generating capacity as the Western Australian Grid). The economic analysis of wind power systems is complex and not fully resolved, although there is growing confidence that wind energy can make a significant and cost-effective contribution to grid power supplies in some locations.

Australia's largest wind farm is located at Crookwell in NSW, and consists of 8 x 600kW turbines, generating a total of 4.8MW. The other major wind farm in Australia is Western Power Corporation's Ten Mile Lagoon Wind Farm, located near Esperance on the south coast of WA. Ten Mile Lagoon has 9, 225kW wind turbines, generating a total of 2MW. An additional 10MW is being planned for Blayney, NSW which will double Australia's installed capacity of wind generation to 20MW.

An Analysis of Wind Power as an Alternate Source of Energy. (2021, Oct 31). Retrieved from http://envrexperts.com/free-essays/essay-about-analysis-wind-power-alternate-source-energy 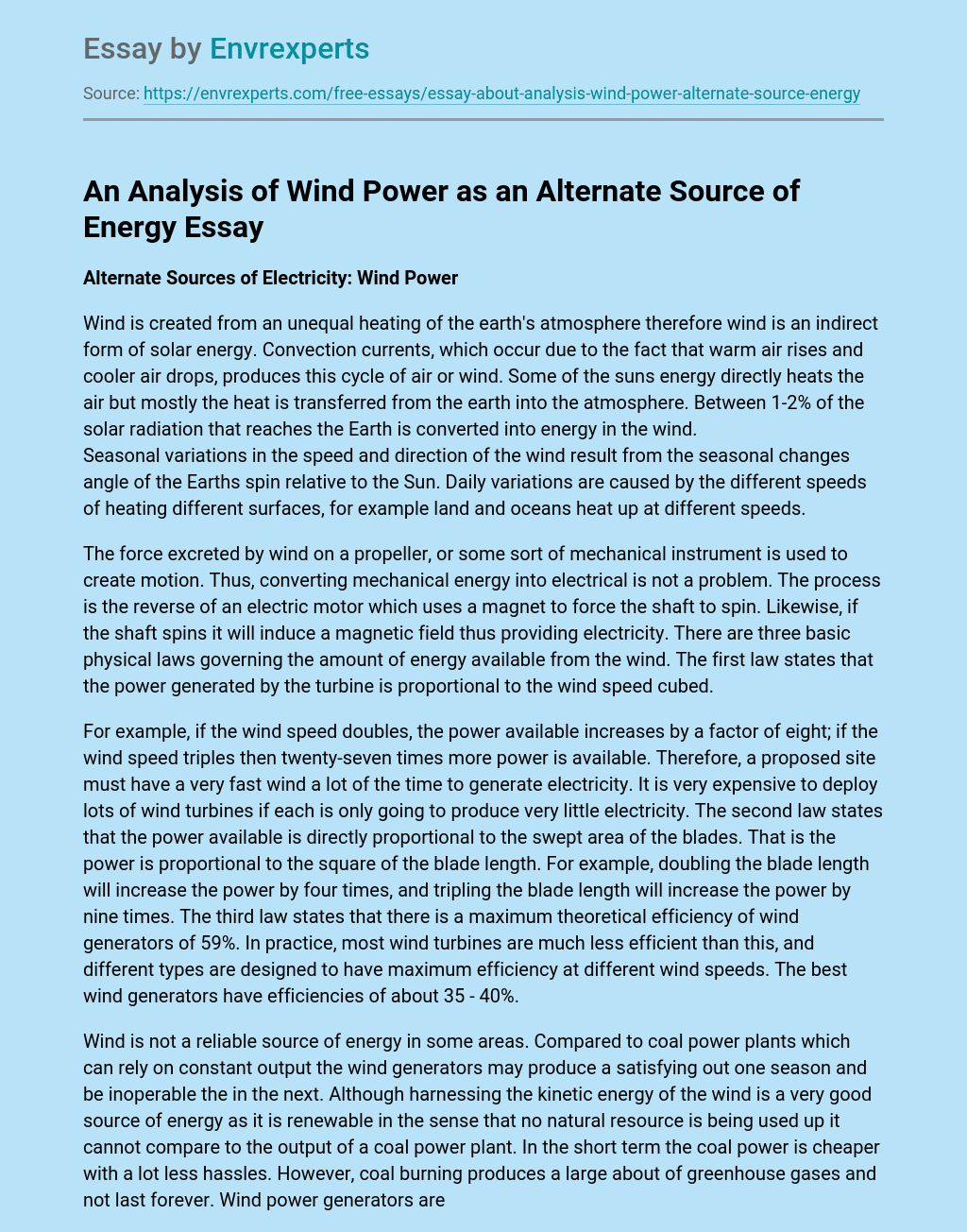