Analyzing the Changes in Environment Through History

There are two ways to consider the impact of delving into Environmental History. We can mold a better and sustainable future while keeping the health of the environment in mind and we can acquire a better understanding of how society came to be through its dependence on the ecological services the environment provided. Although these are only two ways of perceiving the use of understanding environmental history, there are many perspectives as to why environmental history is important. The first US environmental era was the Tribal era where hundreds of Native American tribes existed to which each had its own distinguished language and culture.

Don’t waste time
Get a verified writer to help you with Analyzing the Changes in Environment Through History
Hire writer
$35.80 for a 2-page paper

These people were of the hunter-gather roles who had very little impact on their environment due to their numbers.

The next era was the Frontier era (1607-1890) in which European settlers, who were new to North America, cleared lands for crops. In their efforts to gain more land for settlements, they drove away many Native American that had lived sustainably for millenniums.

Another aspect of this era was the involvement of the U.S. government. In its efforts to endorse settlements out in West, the U.S. government either gave out or cheaply sold half of its federal land to railroad and mining companies, land developers, schools, universities, and homesteaders. This era came to an end when the government declared the frontier officially closed in 1890.

The third environment era was the Early Conservation Era (1832-1870) which was a time in which some citizens had become aware of the increasing rates of resource consumption and degradation.

They spurred the government to preserve some parts of the untouched wilderness on public lands owned jointly by all its citizens. These preservations would be left to be enjoyed for the future generations. Two notable conservationists during this time were Henry David Thoreau and George Perkins Marsh. The former conservationist chose to build and live in a cabin in the woods to better understand nature. While there, Thoreau wrote an environmental classic "Life in the Woods". The latter was a scientist and member of Congress who published "Man and Nature" a book that provided insight to both legislators and citizens for the need to conserve the finite amount of resources. Using several scientific studies and case studies as means to further his point about resource conservation, Marsh showed how the rise and fall of civilizations were linked to the misuse of the civilizations resources.

After the Early Conservation era, there were many significant events relating to environmental conservation. Between 1870 and 1930, the preservationist movement was happening and was making great progress during the leadership of the country's best environmental president Theodore Roosevelt. Roosevelt had persuaded Congress to pass the Forest Reserve Act of 1891 to give him the power to designate public lands as federal wildlife refuges. In 1905, he created the U.S. Forest Service to manage and protect the forest reserves. In 1906, Congress passed the Antiquities Act which allowed the president to protect areas of scientific or historical interests on federal lands as national monuments. Early into the 20th century, there was a split in the Conservation movement into two factions over how public lands should be used. The Conservationists, led by Roosevelt, believed all public lands should be managed wisely and scientifically to provide needed resources. On the other hand, the

In 1916, Congress passed the National Park Service Act that declared that parks are to be maintained in a manner that leaves them unimpaired for future generations. Proceeding this Act was the establishment of the National Park Service whose sole goal is to manage the entire park system. After WWII, the US was experiencing economic growth and expansion. During the presidencies of Harding, Coolidge, and Hoover, the federal government promoted increased sales of energy, mineral, and resources found on the public lands at lower prices to stimulate economic growth. Between 1930 and 1960, after the Stock Market Crash of 1929 and during the Great Depression, Roosevelt implemented the Civilian Conservation Corps (CCC). This federal program made use of the 2 million unemployed workers by putting them to work planting trees and developing recreational and park areas. In 1935, Congress passed the Soil Conservation Act as a part of the Department of Agriculture to correct the enormous erosion problems that had ruined many farms in the Great Plains states.

Fast forward to 1964 when Congress passed the Wilderness Act in which lands in the National Wilderness System were only to be used for hiking and camping science of ecology between 1965 and 1970 received much publicity. During the environmental decade of the 1970s, the first Earth Day was held on April 1, 1970, the Environment Protection Agency was born, and the Endangered Species Act of 1973 strengthened the government's role in protecting endangered species. In 1977, the US Congress created the Department of Energy in efforts to develop an efficient energy strategy and to reduce reliance on oil. In 1980, the US led the world in research and development of wind and solar energy technologies. In between 1990 and 2010, opposition to environmental laws from firms picked up momentum. They argued that environmental regulations were impediments for further economic growth.

Relevant to the topic of environmental history and regulation, the 2014 U.N. Climate Change summit that was held in Manhattan was a culminating point for climate change awareness. Despite my connections with the Micronesian delegation, I was not able to attend the summit. Although I was able to attend discussions two days after when the Micronesian and Marshallese President gave them talks on climate change affecting their countries. From what I read and learned from the delegation, the U.N. Climate summit was held to raise political momentum for a universal climate agreement centered on five fronts: cutting emissions; mobilizing money and markets; pricing carbon; strengthening resilience; and mobilizing new coalitions. The spoken word poetry titled “Matafele Peinum” performed by Kathy Jetnil-Kijiner was so powerful in conveying the emotions that every person who has experienced the effects of climate change on their homelands—whether it being a vast country or tiny island. I do feel like the 2014 U.N. Climate Change summit was a culminating point in environmental history. Yet at the same time, I do think there will be an even bigger summit with even an even greater impetus to enact not just laws regarding climate action but bring all people to an epiphany that we have one life system in the entire solar system called Earth. Only time will tell whether or not we chose to bring about greater change regarding climate change and environmental health.

Blog Question: How will this knowledge of environmental history shape the future regarding environmental policy? Is it still applicable in the modern world given that the world today is radically different from what it was 50 years ago?

Analyzing the Changes in Environment Through History. (2021, Oct 31). Retrieved from http://envrexperts.com/free-essays/essay-about-analyzing-changes-environment-through-history 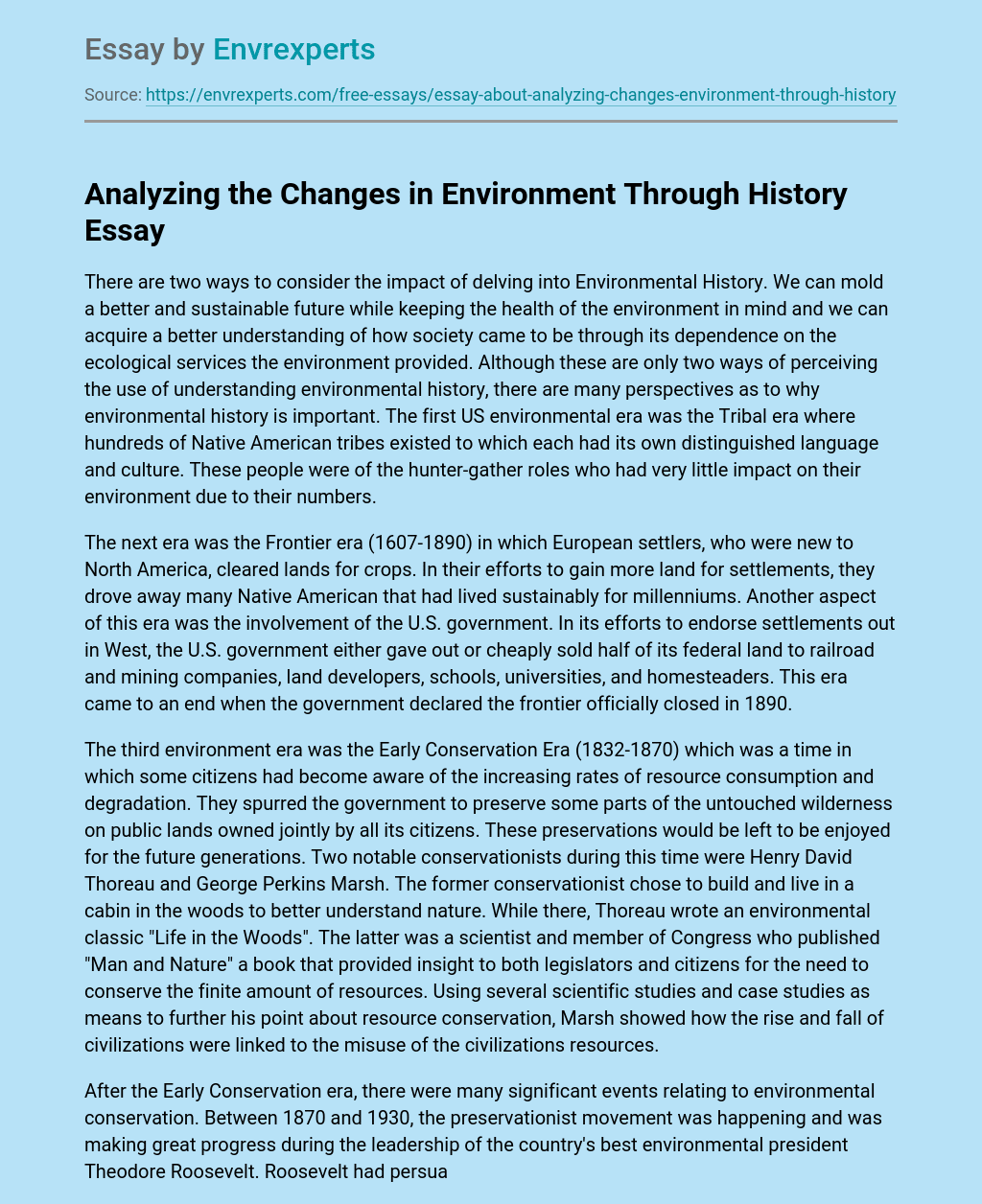