Analyzing the Factors Impacting the Decision to Implement the Keystone Pipeline

The Keystone pipeline project is one project which requires an intensive, in-depth analysis in order to make the right decision concerning its approval. The most important thing is to weigh between the options available by looking at the pros and cons associated with the project. The best way to arrive at a most appropriate decision will be the use of a PESTEL analysis which looks into political, economic, social, technological, environmental, and legal issues concerning the project. The following is a PESTEL analysis of the project.

Don’t waste time
Get a verified writer to help you with Analyzing the Factors Impacting the Decision to Implement the Keystone Pipeline
Hire writer
$35.80 for a 2-page paper

Politically, the project places the government of President Obama in a difficult situation when it comes to the approval or rejection of the project from Trans Canada. The Democratic Party’s stance concerning climate change includes a strong opposition of carbon emission into the air. Additionally, many Americans were in support of Obama’s candidacy in 2008 because environmental concerns were a big part of his political campaign. This means that the rejection of the project plays a major role politically especially when it comes to winning not only the presidential bid but also the trust of the American people.

A disadvantage with rejecting the project is in regards to the international relationship with Canada.  The rejection of the project could lead to tensions between governments and could be seen globally that the US government is not ready to work economically with other governments. However, since the interest of the United States citizens are the core priority of the government, safeguarding them might be the best thing to do.

The project comes with greater economic enticements that every government will never wish to miss a chance. This encompasses job creation during the laying down of the pipe to the tax revenues collected from the Trans Canada company. Similarly, the project will oversee the growth of local companies such as oil refineries at Nebraska and the Gulf Coast. The project would also benefit the entire nation by ensuring that there is sufficient supply of petroleum energy to power and drive economic growth of the country. However, the setbacks are that the people within the route through which the pipe has to be laid will not benefit much from the project. The population within the area is spicily populated and the economic activities within the area do not rely on the project. Considering an alternative route will be relevant to the locals of the identified route.

The proposal made concerning the project indicates that there will be a huge change to be witnessed concerning the processing of the oil products. Technologies that stand to advance carbon emission will be advanced. Innovators will be given a chance to showcase their ability to employing technology towards the development of the country. However, with the use of advanced technology, a reduction in jobs could be the result of this. The machines will take away some of the jobs which will leave people unemployed. The side effects of the technologies to be developed are not clearly known.

Environmentally, the project is a disastrous one. It means that with an increase in production of oil barrels per day, there will be increased emission of carbon in the air. This will contradict the vision of reducing carbon emission by 2% worldwide. Additionally, the project is also associated with high risks of oil spillage which could negatively impact citizens and the entire eco-system. Several similar cases have been witnessed in the past hence there is no need to risk with this project too. The byproducts emitted could negatively impact the environment bearing in mind that the disposal place will be within the same environment which is the water.

The following are stakeholders who have a greater influence in the making of decision that concerns the Keystone Pipeline.

The people of this region have a greater influence on the making of the final decision. The first and foremost factor to consider is that the land within the area is privately owned hence the owners need to be consulted first. Also, the locals are heavily engaged in agriculture (cattle ranching) which are how they earn a living. Placing a pipeline in the region means some residents will lose their homes and means for making money. The president would be responsible for this so he would want to consult them before taking any action.

The president is responsible for the well-being of the entire country. If any action will be consequential, then he will be held accountable for the decision. The sole decision-making powers lies within his jurisdiction. He has a responsibility to ensure that all people are informed and relevant stakeholders are consulted before making a decision. He is a key player with interest and significant power.

They are the correct group of people to consult when it comes to matters of environmental protection. They are neither responsible for someone or something, but they can be held accountable for the advice they give when they are consulted. They are also important because having their support can help with convincing and earning the trust of the American people. They push for transparency, regularly express concerns about the project, and draw attention through the use of campaigns, media, and Congress. They’re often consulted and are context setters with medium power and medium legitimacy.

All eyes are focused on the president because he is the one to make a final decision. Trans Canada is one of the key stakeholders and has great influence in this matter. They are motivated by profit and have spent 2 billion dollars to advance the project. They have also spent over 1.5 million dollars on lobbying activities and advertisements in an effort to sway political figures as well as the public. They can pull out of the project at any time but they also suffer the most should the decision not favor them.  If they decide to pull out, they can conduct a write-down but it would be around 1 billion dollars in loss. Ultimately, they’re players with interest and power.

The most important thing is to do what is best for the American people. If I were the president, I would make the following decision concerning the project. First, I would approve the project but only with preconditions. The time of establishment will be extended by one year to give adequate time for preconditions to be met. Secondly, an assessment needs to be completed to see which landowners in the affected areas have to vacate. The ones that will have to vacate will only vacate after receiving full compensation from TransCanada. Thirdly, Trans Canada will adjust the route of the pipeline to ensure the pipeline does not go through the Ogallala aquifer. This will ensure the drinking water will not be affected in case of an unfortunate accident or spillage may occur. The next thing is Trans Canada will work directly with the ENGOs to find a compromise in order to reduce carbon emissions. I want us to employ advanced technology in order to help mitigate and potential pollutants to the environment. I believe approving the project and implementing these additional measures will benefit the American people overall. We will improve the economy while simultaneously ensuring the safety of the American people.

Analyzing the Factors Impacting the Decision to Implement the Keystone Pipeline. (2021, Oct 31). Retrieved from http://envrexperts.com/free-essays/essay-about-analyzing-factors-impacting-decision-implement-keystone-pipeline 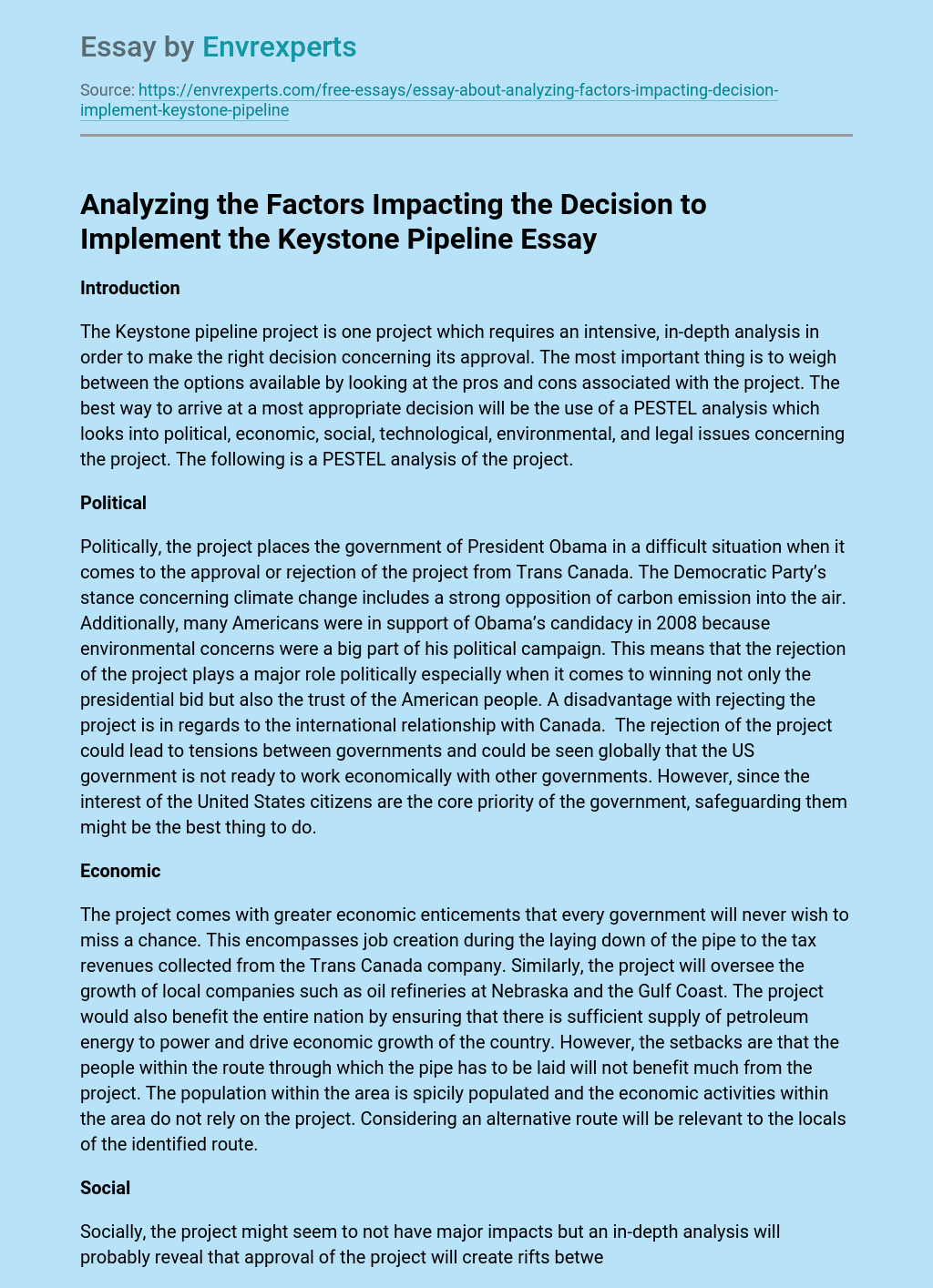