Without ecosystems, how would living organisms prosper? The balance that is created in ecosystems between different communities, different population between species, competitions over materials, and more all fall under the umbrella of one specific topic: Ecology. Ecology is basically a category of Biology that studies the interactions and relationships between living/nonliving things and their surroundings.

Everything starts when a producer absorbs sunlight from the sun. This is their source of energy. A consumer comes along (referred to as Consumer 1—most likely an herbivore) and preys on the producer.

Don’t waste time
Get a verified writer to help you with Animal and Plant Ecosystem Research
Hire writer
$35.80 for a 2-page paper

The consumer receives only 10% of the energy the producer contains. Another consumer comes (referred to as Consumer 2—most likely a carnivore) and preys on Consumer 1. Consumer 2 receives 10% of the energy Consumer 1 had. As an organisms are being preyed on, only 10% of energy is transferred to the predator. Once the last organism in this chain dies, a decomposer breaks down the remaining energy and recycles it into the ecosystem. This whole chain itself describes not only the energy pyramid, but the food chain as well.

A food web is basically a food chain, except predators can prey on more than one organism included in the web.

A niche is where an organism is assigned a certain role in the ecosystem it resides in. Competition occurs when two niches overlap, and two organisms fight over a limited resource. There are two types of competition: intra-specific and inter-specific. Intra-specific is when two or more members of the same species fight over the same resource(s).

This includes food, mates, territory, etc. Inter-specific is when two or more different species compete for territory, shelter, food, etc. Survival of the fittest would be the victor. A biomass pyramid is a concept where there needs to be more prey than predators in order for the food chain/food web/food pyramid to work and for every species in those charts to survived. For example, if an ecosystem consisted of carrots, rabbits, and hawks, in order for the rabbits to survive, there needs to be more carrots than rabbits. In order for the hawks to survive, there needs to be more rabbits than hawks. This is related to the number pyramid, since the higher a species is in a food chain, the smaller the species' population. Symbiosis goes into more detail of the relationship between two species. There are five types of symbiosis; this includes mutualism, commensalism, parasitism, facultative, and obligate.

Mutualism is when both symbiotes contributed to each other. Parasitism is when only the parasite benefits, with said parasite harming its host. Commensalism is when one symbiont helped, while the other did not help or harm the symbiont that helped. Facultative is when a symbiont is helpful, but what they do is not necessary for both organisms' survival. Obligate is when what a symbiote does is necessary for one or both symbiotes' survival. In order to examine these categories, we created our own ecosystem located inside a bottle. We hypothesized that these organisms will survive based on the different parts of ecology and the abiotic/biotic factors we will be putting into it, so we created an aquatic habitat to test this hypothesis.

We used a 2 liter bottle without is label for this experiment. We used a razor to create a small flap on the top of the bottle, and poured about 361.9 g of gravel into it. We poured aged water up to about 5 centimeters below the cut. The pH of the aged water was 6. An elodea plant was placed inside the bottle, with the gravel supporting it so it would not float up. Two fish were placed inside the bottle. A small amount of shrimp eggs were added as well, so the fish would have a food source. A snail was also placed into the bottle. Tape was used to cover the flap. The bottle was placed under sunlight.

The population of each species decreased drastically and very quickly in this experiment. The death rate was very high. After 4 days, every organism was dead, except the snail. The elodea plant grew a centimeter taller. There was fish waste in the water, and a white substance enveloped the fish. On Day 10, the fish had decomposed, the water was very dirty, the temperature of the water was a lot warmer, the elodea plant turned black, and the shrimp eggs seemed to have never hatched. The PH of the water, however, stayed at 6.

Our attempt at an artificial ecosystem was far from a success. We hoped that the fish would survive for at least a week, but it seems they survived for less than four days. We believe that the sudden increase in water temperature and the lack of food is the cause of this. There was not sufficient enough resources for the other organisms, since they did not survive as well. There was slight condensation on the surface of the bottle. This is an indication of the water cycle. The fish and snail breathe out CO2, which plant breathe in and releases oxygen (photosynthesis). This is an example of the Carbon cycle. The two fish were competing for a limited food source. This is an example of intra specific competition. The snail's niche is the role of the decomposer. The fish's niche is the role of the consumer. The elodea plant's niche is the role of the producer. The elodea plant provided oxygen for the fish and snail, while the snail and fish breathed out CO2 for the plant. This is an example of Mutualistic symbiosis and obligate symbiosis. 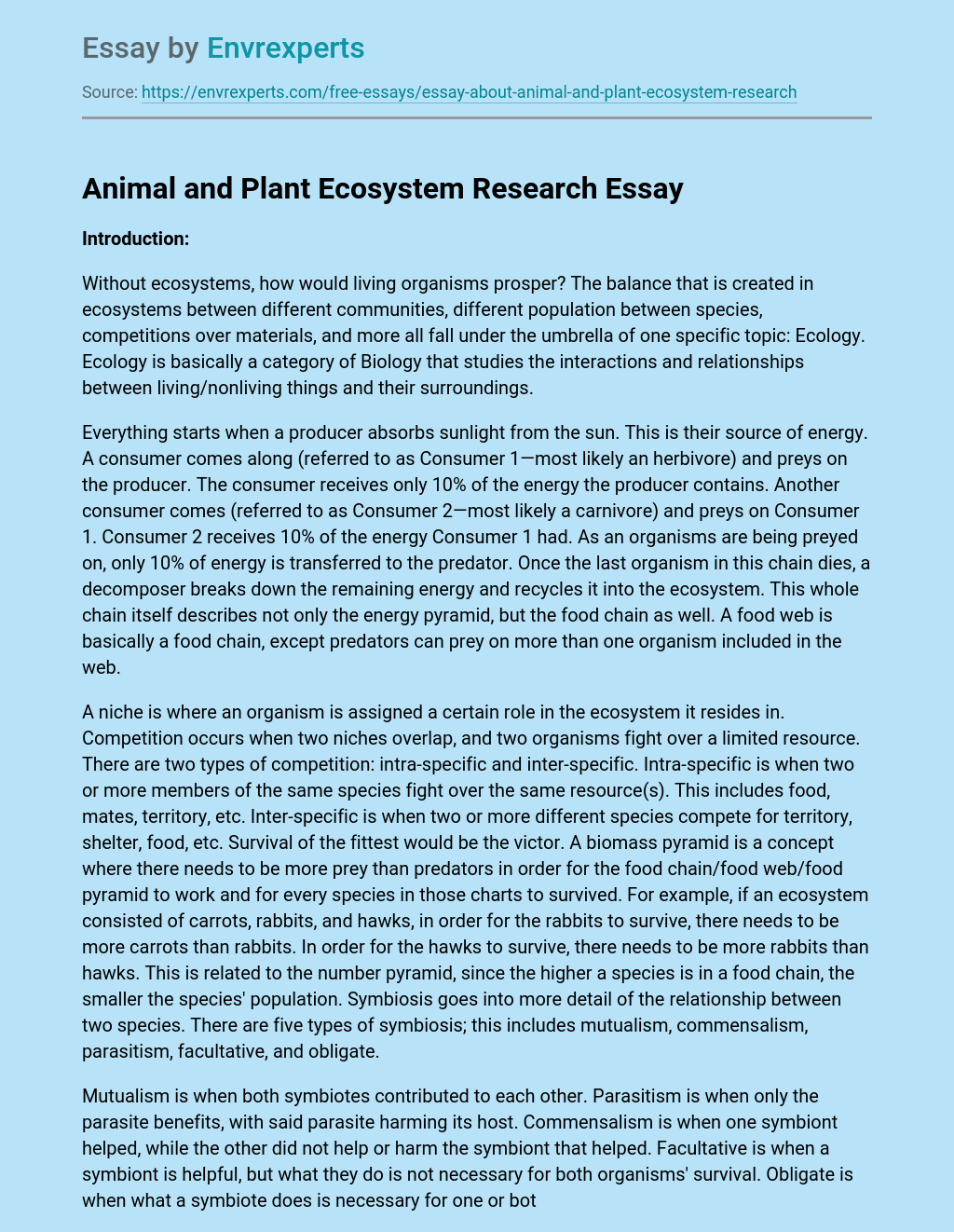