The Answer to Cmbat Global Malnourishment

With an ever increase in population and decrease in agricultural land, increase in temperatures around the world and decrease in useable water levels, the world is on the verge of a global food crisis. The third world countries need to find ways to help feed their citizens as they are the ones which will be impacted the most. Modern problems require modern solutions. A possible blessing in this time could be the development of genetic engineering. This field opens up possibilities of producing more food in less space and the production of disease resistant crops, crops resistant to drastic weather and climatic conditions, plants which require much less water to grow and propagate without ay compromise in its quality.

Don’t waste time
Get a verified writer to help you with The Answer to Cmbat Global Malnourishment
Hire writer
$35.80 for a 2-page paper

This research paper is meant to see whether it is practical solution or not.

The earliest records of Genetically modified plants were 10,000 years ago in Southwest Asia where simple techniques like artificial selection and selective breeding were used.

In the 1800’s, Gregor Mendel’s plant hybridization experiments gave rise to and was the basis of a field we now call Genetic engineering. The discovery of the structure of DNA by Watson and Crick in 1954 and the development of recombinant DNA technology by Cohen and Boyer changed the course of modern biology forever. Everything from medical aliments to agricultural troubles could be solved just by making subtle changes to the gene.
The first patent for genetically modified organism was in 1980 for a bacterium which could eat crude oil and hence had the capacity to control oil spills.

In 1982, insulin was produced from E. coli bacteria and was approved by the FDA to be used by the public. In 1994, FDA approved Flavr savr tomato for sale in grocery stores.

In this technique, an undesirable gene is identified in the DNA of an organism and is removed. Another copy of the gene is the opposite direction which prevents the gene from being expressed (depending on usage). It has many applications like the development of virus resistant plants, silencing of certain types of cancer, resistance to certain disease-causing microorganisms and treatment of neurodegenerative disorders like Huntington’s disease.\nGENE

In this technique, biotechnologists, modify DNA by introducing a new desirable gene into the genome of the organism. Its applications include the production of vaccines, production of vitamins and genetically enriched food such as golden rice which saved the lives of many children in third world countries.

This is not true as the existence of genetic engineering is almost parallel to the development of agriculture. The only difference is that the techniques used weren’t as advanced as they are today. Back then, people used to selectively breed their plants and cattle in favour of a particular property. It was a longer and more time-consuming process.

This myth arose due to the fact that farmers purchase fresh seeds every growing season. They claim that GMO’S do not propagate naturally due to a “terminator” gene and that this gene could spread to organic crops and cause them to become sterile. This is simply not true. The reason farmers prefer new seeds each time is because modern seeds whether they are GMO’s or not, are usually hybrids which means that their progeny can revert back to the parent gene and not the variety that the farmer planted and desires. Buying new seeds each time, guarantees the quality of the produce and saves time. If the farmer wants to save and replant seeds, he can do so but he needs to choose seeds with homozygous genes so that the progeny produced is of the same variety that he wants.

Research found that between 2008 and 2013, there was a 30% decline in bee population in the United States. In Spain, 80% of the beehives were lost in the same period which is a very troubling thought for environmentalists and ecologists all around the globe. This caused the development of a myth that GMO’s are responsible for it.
Further research into the matter linked the decline of bee population to a pesticide called neonicotinoids. The chemical structure of this compound is similar to nicotine which was absorbed by plants through their vascular system which was then ingested by pollinating agents like bees.
Until now, there is no solid proof that GMO plants cause the death of bees.

GENETICALLY MODIFIED ORGANISMS ARE NOT HEALTHY

The claim that GMO’s cause diseases and health issues later in life is not true. In fact, GMO’s are one of the most heavily controlled and tested food products on the market as we can’t take any risk with them. The FDA undertakes extensive care and precautions as any long-term effects caused by these plants is going to shoot up the health care bill paid by the government. On average, it takes around 13 years and 136 million dollars in testing and approving each GMO seed. This is the main reason why very few GMO crops are approved across the world. Studies conducted by the National Academies of Science, Engineering and Medicine conclusively show that approved GMO’s are safe for human consumption.
One concern is Bt. Toxin that is genetically introduced into cotton. This toxin specifically targets pests that attack the cotton plants and destroy them. Current research on Bt. Cotton found it to be “one of the safest and most selective insecticides ever used”. Due to its selective nature, Bt. Cotton could never harm humans.

This is completely false. If anything, GMO’s have the same if not a higher nutritive value than normal organic plants. Introducing desirable genes into the genome of a plant does not alter its nutritive content in any way. Studies by Anne-Marie Mayer about 15 years ago, show the complete opposite. It is the conventional food crops whose nutrient content is reducing.

This myth is based on a French study conducted in 2012. The researchers fed rats a GMO only diet. They results found were that 50% of male rats and 70% female rats dies prematurely due to the development of tumors and organ damage. On further investigation, the European Food Safety Authority declared the study invalid as the species of rat chosen had a higher chance of developing tumour very easily especially when overfed or consuming corn contaminated with fungus.

Comparing both advantages and disadvantages of using GMO’s, how practical is it in solving malnutrition in third world countries? I think if used cautiously, it can help eradicate deficiency diseases as the cheapest of food crops can be genetically enriched with vital vitamins and nutrients so that whatever little the people consume, they will at least be safe from deficiency diseases.
Vitamin A deficiency kills about 670,000 children under age 5 each year in poor countries. The major carbohydrate source of people living in these countries is rice. If the poor countries start producing a GMO called “golden rice”, it will take care of the problem to a large extent as a cup of the rice provides 50% of the RDA for adults. The cost of production remains the same as that of normal rice. Such simple changes can help curtail huge problems. Now, if we accept the World Health Organization’s estimate of 2.7 million premature deaths a year it comes to 54 million children whose lives would have been saved in the past 20 years. What an incredible feat! Almost sounds too goo to be true. The only problem with GMO’s is that it cannot be tested on humans as it is unethical to do so and therefore it effects over the course of a lifetime cannot be determined and monitored easily. Although the Food and Drug Administration does everything in its power to control the ill-effects of GMO’s before releasing them to the general public, we cannot say for sure that there won’t be any problem in consuming such food products. Only time and future research can solidify opinions based on GMO’s.

The Answer to Cmbat Global Malnourishment. (2021, Oct 31). Retrieved from http://envrexperts.com/free-essays/essay-about-answer-cmbat-global-malnourishment 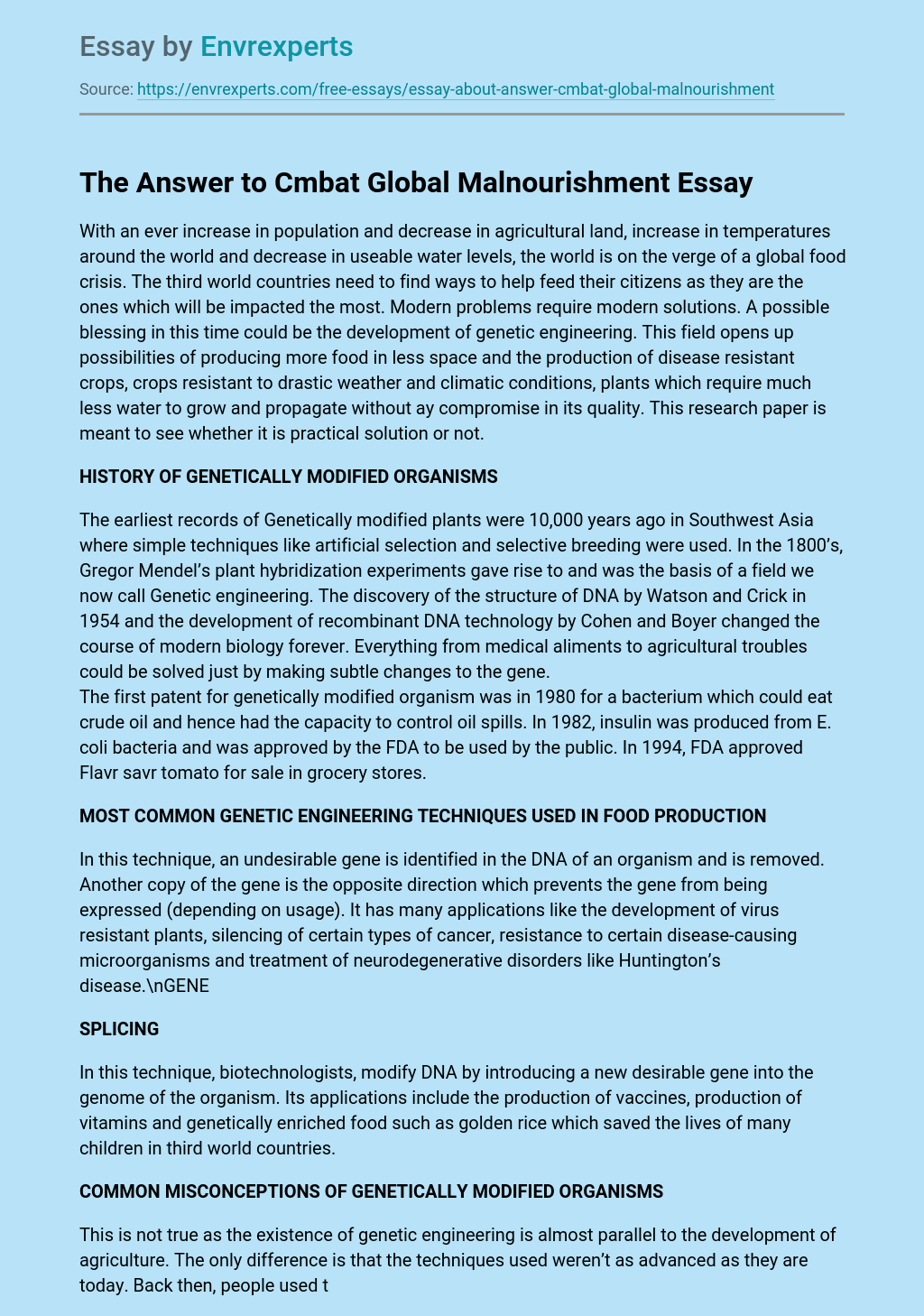