Don’t waste time
Get a verified writer to help you with Anthropocentrism vs Non-anthropocentrism
Hire writer
$35.80 for a 2-page paper

I will evaluate the merits of various viewpoints and the ways in which they can be adapted to provide a reasonable environmental ethic which if feasible for the humans to adopt while also maintaining the health of the environment.

Paul Taylor is an philosopher who advocates for biocentric egalitarian view of the environment in his book Respect of Nature: A Theory of Enviornmental Ethics.

Taylor's theory involves instilling attitude of new respect for nature into people. He establishes his outlook as fundamentally different than ecocentrism in that is not holistic, including only living organisms rather than the entire ecosystem. Taylor states that “Rejecting the notion of human superiority entails its positive counterpart: the doctrine of species impartiality”

These points have been used to base Taylor's argument for a biocentric viewpoint, he argues that the first point results from the facts that humans have a kinship with the earths other organisms and human are dependent on other species yet the world would do better without us(Taylor, Respect for Nature 153).

The third prinicle provides that all organisms have goals, not in the sense that they consciously make decisions of what they want to do, however they all have inclinations for survival and reproduction, therefore rocks or other non-living things in the ecosystem are not morally considerable. Taylor uses this principle to reject Leopold's holism by undermining the attribution for moral consider ability to non-living things without interests.

Ecocentrism has a slightly differing view from biocentism. Two of the main promoters of the ecocentric outlook are Aldo Leopold and J. Baird Calicott who both focus on forming a new “Land Ethic”. Leopold is opposed to an economic land ethic as it can neglect to consider many species and even entire communities “Lack of economic value is sometimes a character not only of species or groups, but of entire biotic communities: marshes, bogs, dunes and deserts are examples” (Leopold 249) and rather argues that the evolution of Land Ethic will be to “include soils, waters, plants, and animals, or collectively the land.” (Leopold 171) Leopold builds off Darwin's assertion that anything human could be attributed to have evolved by natural selection, even ethic can be attributed to natural selection as according to Darwin “no tribe could hold together if murder, robbery, treachery were common.” This suggests that anything evolved from Darwinian evolution is natural course for a species and therefore is proper. Similar to how it is considered to be normal for humans to be capable of bipedal locomotion. Another facet to the Leopold's Land Ethic is the land pyramid showing how the environment is interwoven and all members of the community are dependent on each other. This viewpoint changes the humans from the owners of land to citizens of the community containing the land. Lastly Leopold uses the land ethic to make a moral maxim as to what is right based upon his Land Ethic. He states "A thing is right when it preserves the integrity, stability, and beauty of the biotic community, it is wrong when it tends otherwise." (Leopold 189)

Leopold's land ethic advocates for ideas which place the health of the ecosystem ahead of human wellbeing in their contradictory nature. His ethic can be construed to justify injustice to humans as it may be in the best interest of the environment. An analysis may show that it would be beneficial for the stability of biotic community if the human population was to be 5 billion rather than the over 7 billion living now, according to Leopold's summary moral maxim, it would be right to kill over 2 billion people to preserve the biotic community. This has come to be known as environmental fascism as the environment would take precedence over human affairs despite the moral obligation to humans. Under any conventional moral system it is not permissible to kill large numbers of people for almost any reason, posing a considerable problem for Leopold's land ethic.

Another major issue with Leopold's land ethic is illustrated by Peter Fritzell. He points out that Leopold's land ethic requires humans to be plain members of the biotic community and not think of themselves as superior to other organisms, yet it requires us to allow organisms to reach their maximum potential. This is problematic because for humans to reach their full potential it would inhibit the ability of other organisms to reach their full potential. In reference to humans being plain members of the biotic community J. Baird Callicott explains Fritzell's paradox “If we are, then we have no moral obligations to our fellow members or to the community per se because as understood from a modern scientific perspective, nature and natural phenomena are amoral.” (Callicott 96)

One intriguing anthropocentric view of the environment can be drawn from Russow's theories of species worth through their aesthetic value to humans. Russow explains "Things that have aesthetic value are compared and ranked in some cases, and commitment of resources are made accordingly.” (Russow 106) Elements of Russow's theory for valuing species can be carried over into a system for valuing the environment. Rossow's theory to explain valuing species is entirely anthropocentric as the appeal to humans is the only thing that makes species valuable. If this aesthetic appeal to humans is required to drive obligation towards species, and people have gone to great financial lengths to protect endangered species, then people, driven by anthropocentric sentiments have the ability to impact other environmental concerns from an anthropocentric point of view. 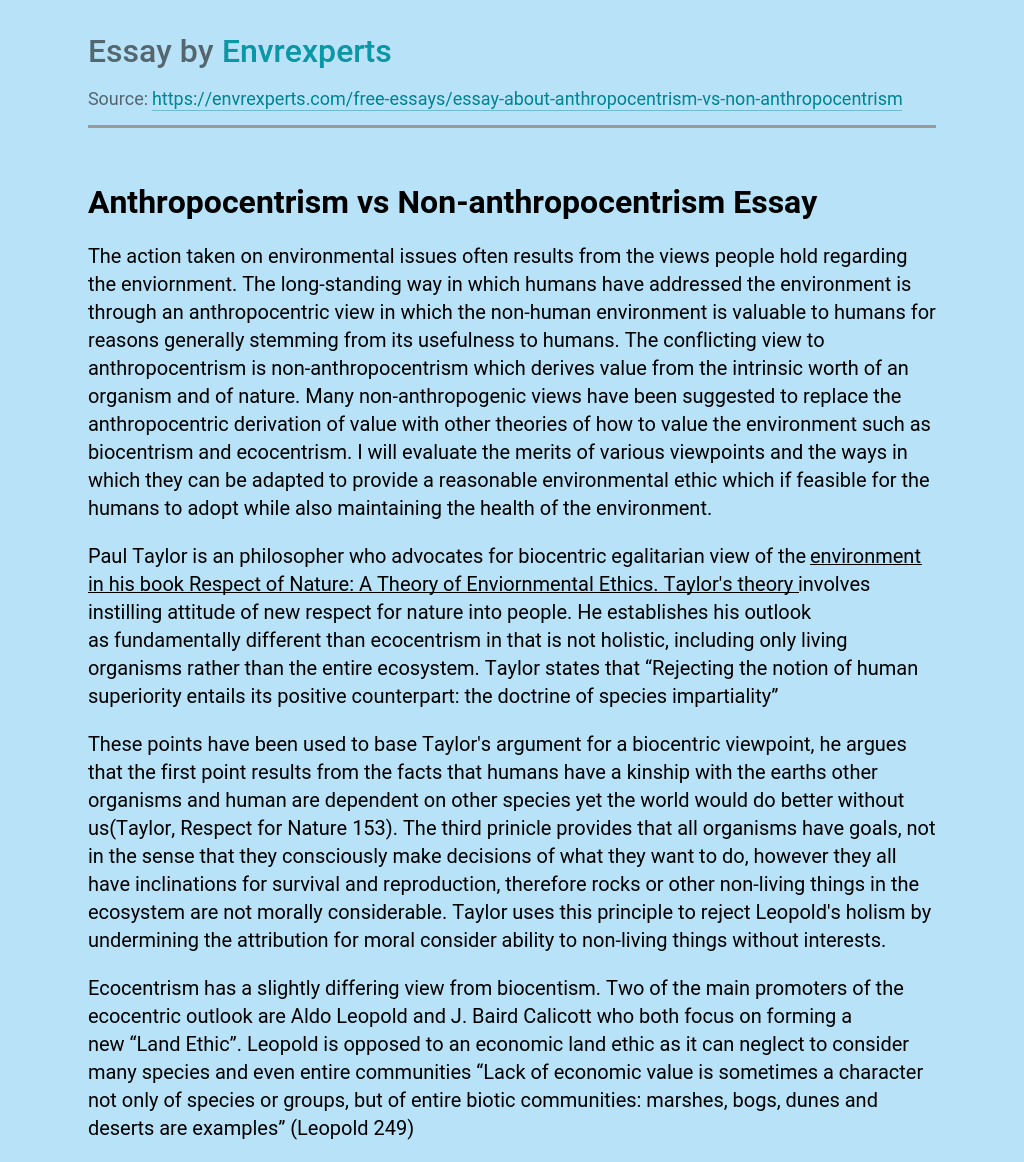